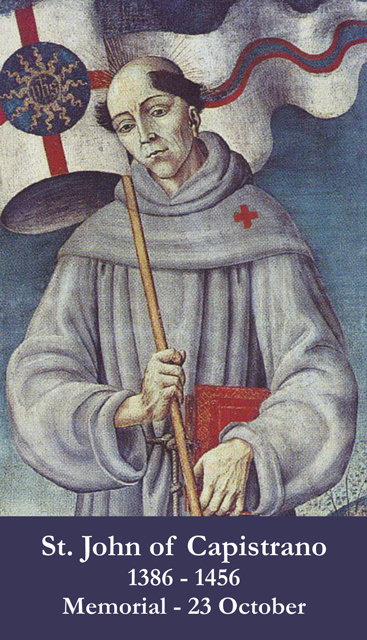 On Oct. 23, the Catholic Church celebrates the life of Saint John of Capistrano, a Franciscan priest. St. John of Capistrano was praised by St. John Paul II in a 2002 general audience for his “glorious evangelical witness,” as a priest who “gave himself with great generosity for the salvation of souls.”

Born in Italy during 1385, John lost his father, a French or possibly German knight, who had settled in Capistrano, at a young age. John’s mother had him well educated, and he studied both civil law and Church law in Perugia. John showed high standards of integrity in his civic career, and in 1416 he labored to end a war between Perugia and the prominent House of Malatesta. But when the nobles had John imprisoned, he began meditating on his life’s direction.

He encountered Saint Francis of Assisi in a dream, and resolved to embrace poverty, chastity, and obedience with the Franciscans. King Ladislas of Naples appointed him governor of Perugia. During a war with a neighboring town he was betrayed and imprisoned. After he was released, he joined the Franciscan community at Perugia in 1416. He found a mentor in Saint Bernardine of Siena, known for his bold preaching and who inspired him to institute the devotion to invocation of the Holy Name of Jesus and His Mother.

John began preaching as a deacon in 1420, and was ordained a priest in 1425. A succession of popes entrusted important matters to John, including the effort to reunite Eastern and Western Christendom at the Ecumenical Council of Florence. Drawing immense crowds in his missionary travels throughout Italy, John also found success as a preacher in Central Europe, where he opposed the Hussites’ error regarding the nature and administration of the Eucharist.

After Constantinople fell to Turkish invaders in 1453, Pope Nicholas V sent John on a mission to rally other European leaders in defense of their lands. Nicholas’ successor Pope Callixtus III was even more eager to see the Christian world defend itself against the invading forces. When the Sultan Mehmet II sought to extend his territorial gains into Serbia and Hungary, John joined the celebrated general Janos Hunyadi in his defense of Belgrade. The priest personally led a section of the army in its historic victory on Aug. 6, 1456.

Weakened by the campaign against the Turks, Hunyadi became sick and died soon after the victory at Belgrade. John survived to preach Janos Hunyadi’s funeral sermon; but his own extraordinary life came to an end after a painful illness, on Oct. 23, 1456. St. John of Capistrano’s feast day is October 23. Called the ‘Soldier Saint’, he is the Patron of judges, jurists, military chaplains, lawyers, Belgrade & Hungary.

Lord, Thou raised up Saint John of Capistrano to give Thy people comfort in their trials. May Thy Church enjoy unending peace and be secure in Thy protection.

We ask this through our Lord Jesus Christ, Thy Son, Who liveth and reigneth with Thee in the unity of the Holy Spirit, one God, world without end. Amen