FEAST OF SAINT JOHN CHRYSOSTOM, BISHOP AND DOCTOR OF THE CHURCH – 13th SEPTEMBER 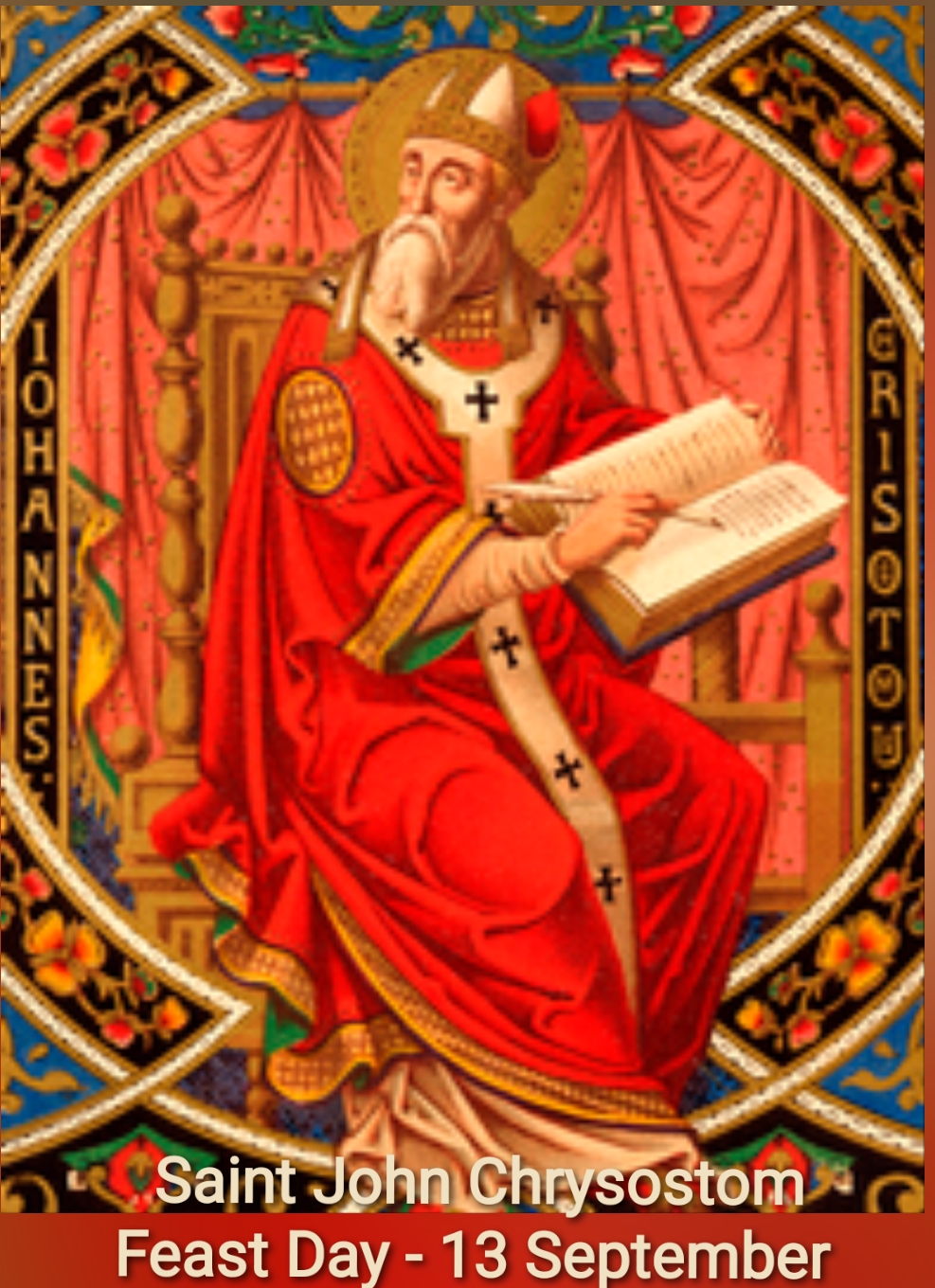 John Chrysostom (c. 347 – 14 September 407) was an important Early Church Father who served as archbishop of Constantinople. He is known for his preaching and public speaking, his denunciation of abuse of authority by both ecclesiastical and political leaders, his Divine Liturgy of Saint John Chrysostom, and his ascetic sensibilities. The epithet Chrysostomos, anglicized as Chrysostom, means “golden-mouthed” in Greek, and denotes his celebrated eloquence.

Chrysostom was among the most prolific authors in the early Christian Church, although both Origen of Alexandria and Augustine of Hippo exceeded Chrysostom. John was born in Antioch in 347. Different scholars describe his mother Anthusa as a pagan or as a Christian, and his father was a high-ranking military officer. John’s father died soon after his birth and he was raised by his mother. He was baptised in 368 or 373 and tonsured as a reader (one of the minor orders of the church). It is sometimes said that he was bitten by a snake when he was ten years old, leading to him getting an infection from the bite.

As a result of his mother’s influential connections in the city, John began his education under the pagan teacher Libanius. From Libanius, John acquired the skills for a career in rhetoric, as well as a love of the Greek language and literature. Eventually, he became a lawyer. As he grew older, however, John became more deeply committed to Christianity and went on to study theology under Diodore of Tarsus, founder of the re-constituted School of Antioch.

According to the Christian historian Sozomen, Libanius was supposed to have said on his deathbed that John would have been his successor “if the Christians had not taken him from us”. John lived in extreme asceticism and became a hermit in about 375; he spent the next two years continually standing, scarcely sleeping, and committing the Bible to memory. As a consequence of these practices, his stomach and kidneys were permanently damaged and poor health forced him to return to Antioch.

John was ordained as a deacon in 381 by the bishop Meletius of Antioch who was not then in communion with Alexandria and Rome. After the death of Meletius, John separated himself from the followers of Meletius, without joining Paulinus, the rival of Meletius for the bishopric of Antioch. But after the death of Paulinus he was ordained a presbyter (priest) in 386 by Flavian, the successor of Paulinus. He was destined later to bring about reconciliation between Flavian I of Antioch, Alexandria, and Rome, thus bringing those three sees into communion for the first time in nearly seventy years.

In Antioch, over the course of twelve years (386–397), John gained popularity because of the eloquence of his public speaking at the Golden Church, Antioch’s cathedral, especially his insightful expositions of Bible passages and moral teaching. The most valuable of his works from this period are his Homilies on various books of the Bible. He emphasised charitable giving and was concerned with the spiritual and temporal needs of the poor. He spoke against abuse of wealth and personal property.

As he said, “Do you wish to honour the body of Christ? Do not ignore him when he is naked. Do not pay him homage in the temple clad in silk, only then to neglect him outside where he is cold and ill-clad. He who said: “This is my body” is the same who said: “You saw me hungry and you gave me no food”, and “Whatever you did to the least of my brothers you did also to me”… What good is it if the Eucharistic table is overloaded with golden chalices when your brother is dying of hunger? Start by satisfying his hunger and then with what is left you may adorn the altar as well”.

His straightforward understanding of the Scriptures – in contrast to the Alexandrian tendency towards allegorical interpretation – meant that the themes of his talks were practical, explaining the Bible’s application to everyday life. Such straightforward preaching helped Chrysostom to garner popular support. One incident that happened during his service in Antioch illustrates the influence of his homilies.

When Chrysostom arrived in Antioch, Flavian, the bishop of the city, had to intervene with emperor Theodosius I on behalf of citizens who had gone on a rampage mutilating statues of the emperor and his family. During the weeks of Lent in 387, John preached more than twenty homilies in which he entreated the people to see the error of their ways. These made a lasting impression on the general population of the city: many pagans converted to Christianity as a result of the homilies. The city was ultimately spared from severe consequences.

In the autumn of 397, John was appointed archbishop of Constantinople, after having been nominated without his knowledge by the eunuch Eutropius. He had to leave Antioch in secret due to fears that the departure of such a popular figure would cause civil unrest. During his time as archbishop, he adamantly refused to host lavish social gatherings, which made him popular with the common people, but unpopular with wealthy citizens and the clergy. His reforms of the clergy were also unpopular. He told visiting regional preachers to return to the churches they were meant to be serving—without any pay-out.

Theophilus therefore accused John of being too partial to the teaching of Origen. He made another enemy in Aelia Eudoxia, wife of emperor Arcadius, who assumed that John’s denunciations of extravagance in feminine dress were aimed at herself. Eudoxia, Theophilus and other of his enemies held a synod in 403 (the Synod of the Oak) to charge John, in which his connection to Origen was used against him. It resulted in his deposition and banishment.

He was called back by Arcadius almost immediately, as the people became “tumultuous” over his departure. There was an earthquake the night of his arrest, which Eudoxia took for a sign of God’s anger, prompting her to ask Arcadius for John’s reinstatement. Peace was short-lived. A silver statue of Eudoxia was erected in the Augustaion, near his cathedral, the Constantinian Hagia Sophia.

John denounced the dedication ceremonies as pagan and spoke against the empress in harsh terms: “Again Herodias raves; again she is troubled; she dances again; and again desires to receive John’s head in a charger”, an allusion to the events surrounding the death of John the Baptist. Once again he was banished, this time to the Caucasus in Abkhazia. His banishment sparked riots among his supporters in the capital, and in the fighting the cathedral built by Constantius II was burnt down, necessitating the construction of the second cathedral on the site, the Theodosian Hagia Sophia.

Around 405, John began to lend moral and financial support to Christian monks who were enforcing the emperors’ anti-Pagan laws, by destroying temples and shrines in Phoenicia and nearby regions. The causes of John’s exile are not clear, though Jennifer Barry suggests that they have to do with his connections to Arianism. Other historians, including Wendy Mayer and Geoffrey Dunn, have argued that “the surplus of evidence reveals a struggle between Johannite and anti-Johannite camps in Constantinople soon after John’s departure and for a few years after his death”.

Faced with exile, John Chrysostom wrote an appeal for help to three churchmen: Pope Innocent I, Venerius, the bishop of Mediolanum (Milan), and the third to Chromatius, the bishop of Aquileia. Pope Innocent I protested John’s banishment from Constantinople to the town of Cucusus in Cappadocia, but to no avail. Innocent sent a delegation to intercede on behalf of John in 405. It was led by Gaudentius of Brescia; Gaudentius and his companions, two bishops, encountered many difficulties and never reached their goal of entering Constantinople.

John wrote letters which still held great influence in Constantinople. As a result of this, he was further exiled from Cucusus (where he stayed from 404 to 407) to Pitiunt (Pityus) (in modern Georgia) where his tomb is a shrine for pilgrims. He never reached this destination, as he died at Comana Pontica on 14 September 407 during the journey. He died in the Presbyterium or community of the clergy belonging to the church of Saint Basiliscus of Comana. His last words are said to have been, “Glory be to God for all things”.

John came to be venerated as a saint soon after his death. Almost immediately after, an anonymous supporter of John (known as pseudo-Martyrius) wrote a funeral oration to reclaim John as a symbol of Christian orthodoxy. But three decades later, some of his adherents in Constantinople remained in schism. Proclus, archbishop of Constantinople (434–446), hoping to bring about the reconciliation of the Johannites, preached a homily praising his predecessor in the Church of Hagia Sophia.

He said, “O John, your life was filled with sorrow, but your death was glorious. Your grave is blessed and reward is great, by the grace and mercy of our Lord Jesus Christ O graced one, having conquered the bounds of time and place! Love has conquered space, unforgetting memory has annihilated the limits, and place does not hinder the miracles of the saint”.

John spent his last years in exile for speaking out once too often against the sumptuous lifestyle of the Empress Eudoxia and the imperial capital. In revenge for his criticisms, the emperor and empress conspired with a faction of bishops who opposed John and had him removed from office and exiled deep into the region of Anatolia in present-day Turkey. Forced to march for three months to his exile, John suffered greatly on this journey, as the harsh elements and rough treatment taxed his already frail health.

He kept up his correspondence until the end; his letters to his friend the deaconess Olympias are a precious record of his last days. He died on Sept. 14, 407. John’s storied last words to his congregation were: “Violent storms encompass me on all sides. Though the sea roar and the waves rise high, they cannot overwhelm the ship of Jesus Christ. I fear not death, which is my gain; nor banishment, for the whole earth is the Lord’s; nor the loss of things, for I came naked into this world, and I can carry nothing out of it.”

These homilies helped to mobilize public opinion, and the patriarch received permission from the emperor to return Chrysostom’s relics to Constantinople, where they were enshrined in the Church of the Holy Apostles on 28 January 438. The Eastern Orthodox Church commemorates him as a “Great Ecumenical Teacher”, with Basil the Great and Gregory the Theologian.

These three saints, in addition to having their own individual commemorations throughout the year, are commemorated together on 30 January, a feast known as the Synaxis of the Three Hierarchs. In the Eastern Orthodox Church there are several feast days dedicated to him:

Heavenly Father, you gave Saint John Chrysostom the elevated gift of oratory, which he fully used for the glory of your Holy Name, preaching strongly towards desisting sumptuous lifestyles and instead building up a life of charity and compassion towards the poor and downtrodden.

He persisted in insisting that lay-people and clergy should be highly spiritual and so edify Christ’s Church by exemplary living. May we learn through his great preachings and turn towards purity of intent in our lives, in Jesus’ Name. Amen 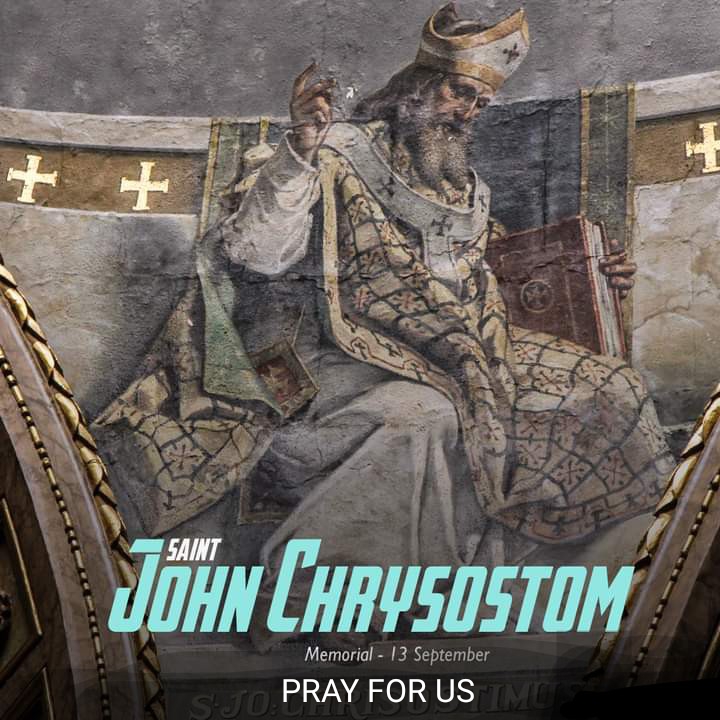 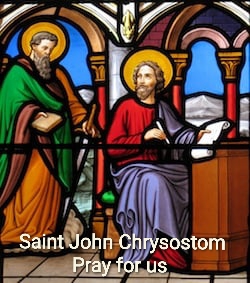 Saint John Chrysostom, pray for us.