FEAST OF SAINT JOHN JOSEPH OF THE CROSS – 5th MARCH 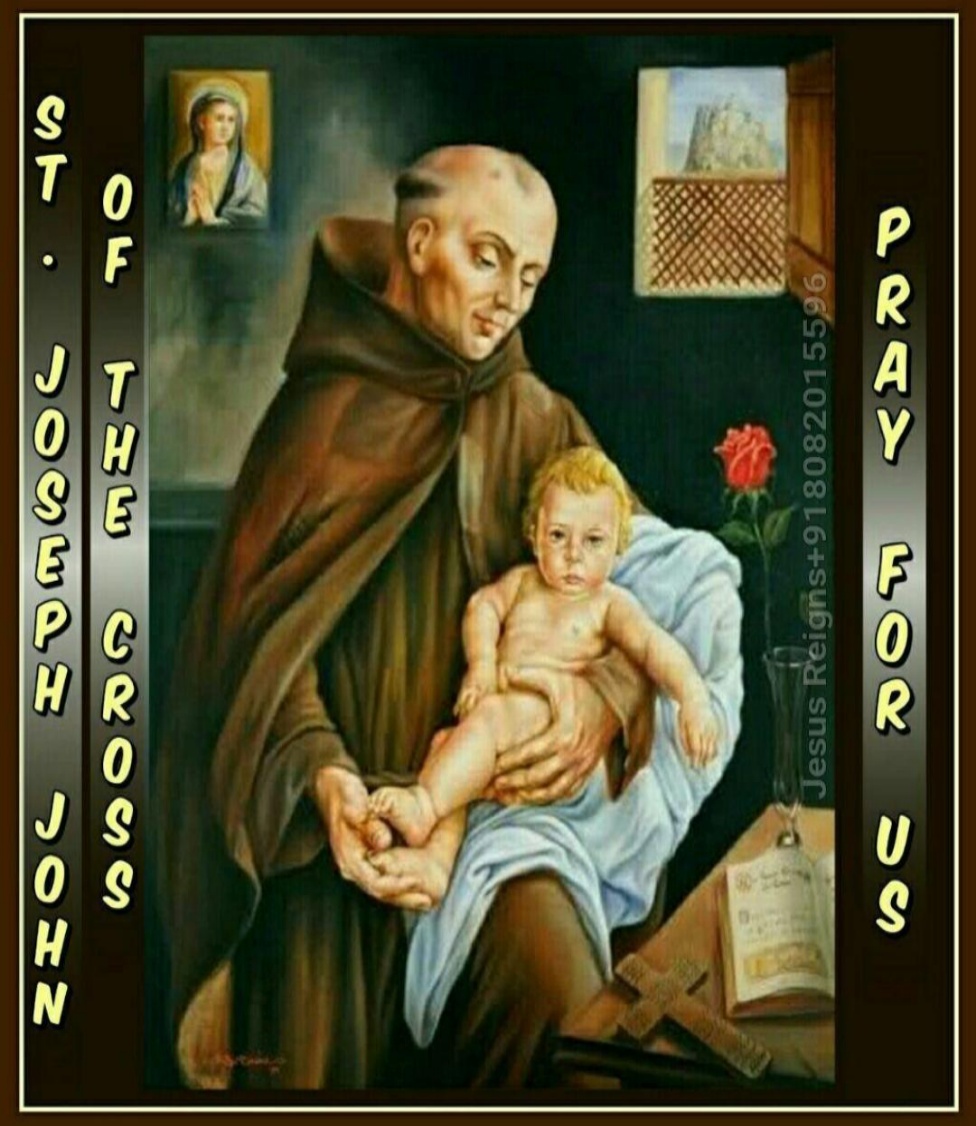 Saint John Joseph of the Cross (5 August 1654 – 5 March 1734) was born on the feast of the Assumption in 1654, on the island of Ischia in the kingdom of Naples. Even as a boy he practiced extraordinary virtue and self-denial. At age sixteen, he proved to be the first Italian to enter the reform movement of St Peter of Alcantara, a convent which had been established in Naples.

In his novitiate Saint John Joseph of the Cross exercised himself in humility and poverty according to the example of their holy Father St Francis, and strove to nourish the spirit of mortification and prayer in imitation of St Peter of Alcantara. Saint John Joseph of the Cross attained to so high a degree of perfection that, even before he was ordained a priest, he was commissioned with the building of a new convent.

Wherever there was hard work to perform during the construction, he was the first at hand to do it. The building itself was arranged to the strictest poverty. Like St Francis, John Joseph preferred not to become a priest, but obedience compelled him to receive holy orders. He gave evidence of great theological knowledge and experience in the ways of spiritual life, and was entrusted with the direction of the novices, into whose youthful hearts he inculcated so admirable a religious spirit that several of his novices became distinguished for their sanctity.

Several times Father Joseph was obliged to accept the office of guardian. When the convents in Italy were no longer dependent on the Spanish houses, but were formed into a separate province, he was appointed provincial in spite of all the objections he raised. Just as every good work meets with many obstacles in the beginning, so it happened to the new province. In the spirit of humility Father Joseph had not put himself forward, but it was in this position that his humility had to contend with the severest tests. He bore all with heroic patience and constancy, and drew blessings and success on the holy work.

When his term of office expired, he lived as a simple subject in the convent at Naples, where he devoted all his time to the care of souls and the practices of piety. Among them was Saint Mary Frances of the Five Wounds. His mortifications were exceptionally rigorous, so that no one may venture to imitate him without a special grace from God. He wore several iron crosses, studded with sharp points, on his shoulders, his back, and on his chest. Daily he scourged himself to the blood. He went entirely barefoot or wore sandals in which small nails stood out.

During the last thirty years of his life he abstained from drink of every sort in honor of the thirst of our Lord. But he was still more intent on interior mortification. In order to keep his soul recollected, he kept a strict guard over all his senses; he strove constantly to deny his own will in order to do only the will of his superiors and thus fulfill the will of God. He emphasized this point also when giving advice to those who came to him for guidance.

An optician named Vincent Lainez was a penitent and a great admirer of this saint. He had a little son, five months old, who was very sick and near death. Full of grief Lainez came to Father Joseph and begged him to obtain the recovery of his child by his prayers. “But Vincent,” said Father John Joseph, “God calls him to Himself.” “No, no!” said the distressed father, “He must leave this child to me. Last year He took my daughter, that is enough; one for Him and the other for me.” Reluctantly Father Joseph answered: “You should submit to the will of God; but since you will not, very well! You will suffer the consequences.”

The child recovered, but it ceased growing; it attained its third year, but gave no signs of intelligence. The unhappy father, whom Father Joseph evaded during this time, could stand it no longer; he went to the cell of the Father, cast himself contritely at his feet and acknowledged his sin. After praying a while, the saint turned to him with sincere compassion and said: “You deprived God of the honor, and the child of the happiness which it should have enjoyed in heaven during all this time in praising God. He punished you, but He sees your sorrow and the punishment is at an end. Return to your home.”

Arriving there, the father beheld his child in the throes of death. The boy turned his little face toward his father with a sweet smile, the first ever to be seen, and then a moment later his innocent soul took its flight to heaven. As an old man, Saint John Joseph of the Cross was severely troubled with ulcers on his legs, so that he could hardly make a step without the use of a cane.

One day when he was in the cathedral, to venerate the blood of the holy martyr Januarius (which is miraculously liquefied each year when the vial containing the blood is placed near the head of the saint), Father Joseph’s cane was lost in the crowd that pressed about him. He was obliged to support himself at the walls until he arrived at the church door. There he paused while he asked the saint to return his cane to him.

A distinguished gentleman, who had come to the church in his carriage, asked Father Joseph what had happened. Raising his hand, Saint John Joseph of the Cross said: “My hobby-horse has run away, but St Januarius will bring him back.” At that moment the people in church began to cry aloud: “A miracle! A miracle!” The cane was seen passing through the air until it reached his hand. Later on, a cardinal asked the favor of possessing the object of so charming a miracle; he had it encased in a precious shrine.

– From ‘The Franciscan Book of Saints’, ed. by Marion Habig 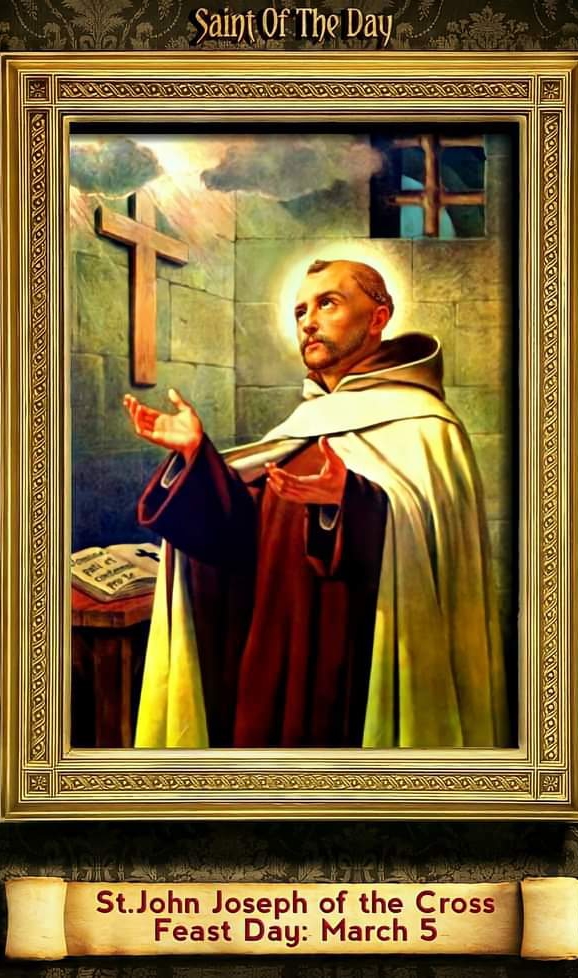 St. John Joseph, we ask today for your mighty intercession, to pray for us that we learn humility and seek an attitude of service so we, too, may follow in the footsteps of Jesus.

We make this prayer to Christ our Lord. Amen