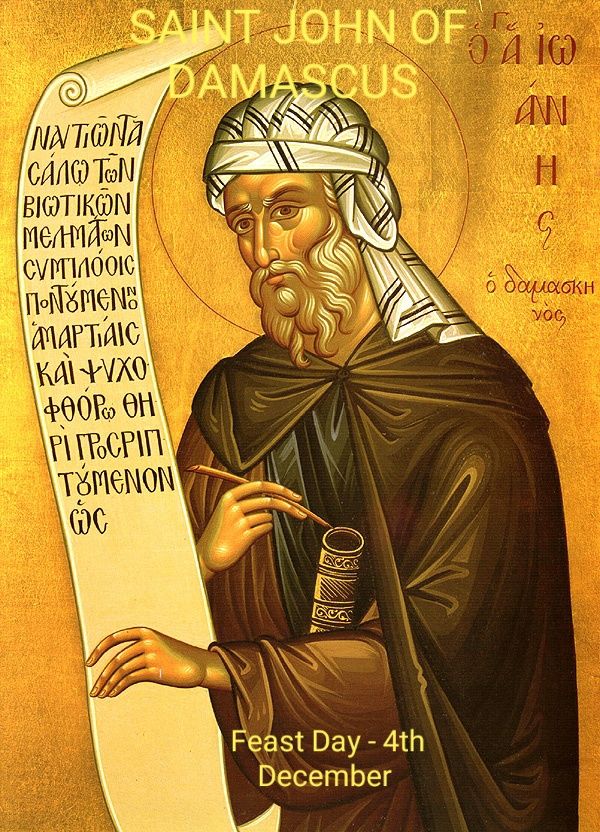 St. John of Damascus, also called Saint John Damascene, Latin Johannes Damascenus, (born c. 675, Damascus—died December 4, 749), near Jerusalem; was an Eastern monk and theological doctor of the Greek and Latin churches whose treatises on the veneration of sacred images placed him in the forefront of the 8th-century Iconoclastic Controversy and whose theological synthesis made him a preeminent intermediary between Greek and medieval Latin culture.

John was raised in Damascus, and during his adolescence, John associated with the future Umayyad caliph Yazid I and the Taghlibi Christian court poet al-Akhtal. It was his father’s desire for him to “learn not only the books of the Muslims, but those of the Greeks as well.” From this it has been suggested that John may have grown up bilingual. John does indeed show knowledge of the Quran, which he criticizes harshly.

John’s tutor was a monk by the name of Cosmas, who had been kidnapped by Arabs from his home in Sicily, and for whom John’s father paid a great price. Under the instruction of Cosmas, who also taught John’s orphan friend, Cosmas of Maiuma, John is said to have made great advances in music, astronomy and theology, soon rivalling Pythagoras in arithmetic and Euclid in geometry. As a refugee from Italy, Cosmas brought with him the scholarly traditions of Latin Christianity.

John possibly had a career as a civil servant for the Caliph in Damascus before his ordination. He then became a priest and monk at the Mar Saba monastery near Jerusalem. John left Damascus to become a monk around 706, when al-Walid I increased the Islamicisation of the Caliphate’s administration. This is uncertain, as Muslim sources only mention that his father Sarjun (Sergius) left the administration around this time, and fail to name John at all. During the next two decades, which culminated in the Siege of Constantinople (717 – 718), the Umayyad Caliphate occupied the borderlands of the Byzantine Empire.

An editor of John’s works, Father Le Quien, has shown that John was already a monk at Mar Saba before the dispute over iconoclasm, explained below. In the early 8th century, iconoclasm, a movement opposed to the veneration of icons, gained acceptance in the Byzantine court. In 726, despite the protests of Germanus, Patriarch of Constantinople, Emperor Leo III (who had forced his predecessor, Theodosius III, to abdicate and himself assumed the throne in 717 immediately before the great siege) issued his first edict against the veneration of images and their exhibition in public places.

John of Damascus undertook a spirited defence of holy images in three separate publications. The earliest of these works, his Apologetic Treatises against those Decrying the Holy Images, secured his reputation. He not only attacked the Byzantine emperor, but adopted a simplified style that allowed the controversy to be followed by the common people, stirring rebellion among the iconoclasts. Decades after his death, John’s writings would play an important role during the Second Council of Nicaea (787), which convened to settle the icon dispute.

John’s biography recounts at least one episode deemed improbable or legendary. Leo III reportedly sent forged documents to the caliph which implicated John in a plot to attack Damascus. The caliph then ordered John’s right hand be cut off and hung up in public view. Some days afterwards, John asked for the restitution of his hand, and prayed fervently to the Theotokos before her icon: thereupon, his hand is said to have been miraculously restored. In gratitude for this miraculous healing, he attached a silver hand to the icon, which thereafter became known as the “Three-handed”, or Tricheirousa, now located in the Hilandar monastery of the Holy Mountain.

John of Damascus was the last of the Greek Fathers. His genius was not for original theological development, but for compilation of an encyclopedic character. In fact, the state of full development to which theological thought had been brought by the great Greek writers and councils left him little else than the work of an encyclopedist; and this work he performed in such manner as to merit the gratitude of all succeeding ages. Some consider him the precursor of the Scholastics, whilst others regard him as the first Scholastic, and his “De fide orthodoxa” as the first work of Scholasticism.

When the name of John of Damascus was inserted in the General Roman Calendar in 1890, it was assigned to 27 March. The feast day was moved in 1969 to the day of John’s death, 4 December, the day on which his feast day is celebrated also in the Byzantine Rite calendar, Lutheran and the Anglican Communion and Episcopal Church. On 4 December, he is remembered with a commemoration in the Church of England. In 1890, he was declared a Doctor of the Church by Pope Leo XIII. He is Patron Saint of Pharmacists, icon painters, and theology students.

PRAYER OF ST JOHN OF DAMASCUS

O Lord and Master Jesus Christ our God, who alone hast power to absolve men from their sins, for Thou art good and lovest all men, forgive all my transgressions done in knowledge or in ignorance, and make me worthy without condemnation to have communion of Thy divine and glorious and pure and life-creating mysteries.

Let them not be for my punishment, or for the increase of my sins. But let them be for my purification and sanctification, as a promise of the life and kingdom to come, a defense and a help and a repulsion of every evil attacker and the removal of my many transgressions. For Thou art a God of mercy and generosity and love for mankind, and to Thee we send up glory, with the Father and the Holy Spirit, now and ever and unto ages of ages. Amen 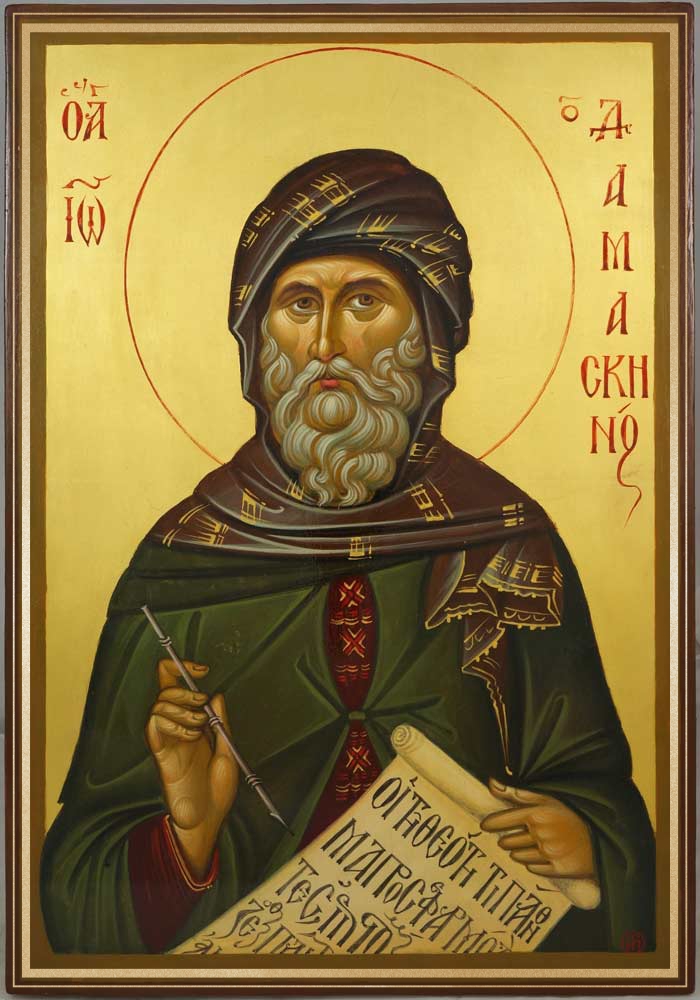 Saint John of Damascus, pray for us.