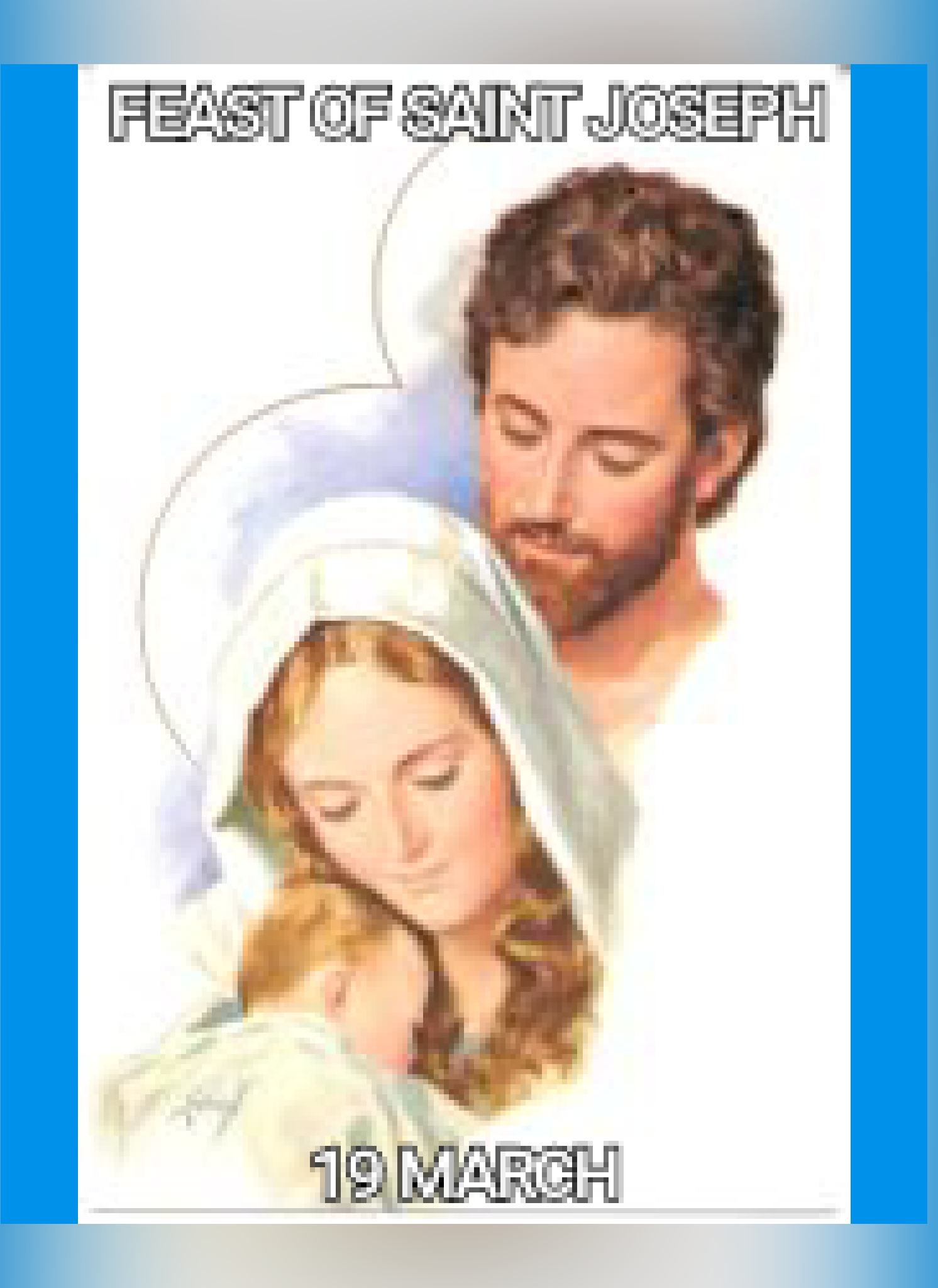 Joseph was a 1st-century Jewish man of Nazareth who, according to the canonical Gospels, was married to Mary, the mother of Jesus, and was the legal father of Jesus. The husband of Mary had a perfect spouse, untouched by original sin. He was also the foster father to a boy who was the Son of God and the Second Person of the Holy Trinity. Yet Saint Joseph, the least perfect member of his household, was still the head of the family.

Authority does not always flow from moral or intellectual superiority. Authority in the Church, in particular, is God given. Because God chooses a certain person to fulfill a task in His household of faith, that person acts with a divine mandate to teach, sanctify, and govern the people and things entrusted to him. Saint Joseph is a model for how God uses imperfect instruments to exercise His perfect will.

The history of the Church is replete with imperfect tools who have caused scandal and division. Wayward leaders have cost the Church entire countries. Yet despite all these unworthy instruments in the hands of the Divine Master, truth, shelter and grace continue to be provided to those baptised into the Church, the Master’s family. God wants us to have character. God’s angels are created spirits who lack the restrictions imposed by a human body. 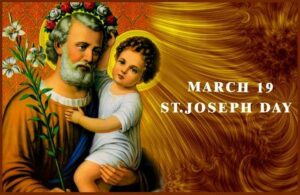 Saint Joseph was, like all the saints, unique. He probably had personal traits which were less than perfect. These imperfections were absolutely no obstacle to Mary and Jesus obeying him, loving him, and ceding to his authority in the Holy Family of Nazareth. Mary and Jesus would have happily bent to the will of their God-given guide, despite their metaphysical, moral, spiritual, and intellectual superiority.

Ancient traditions hold that Saint Joseph was considerably older than the Virgin Mary. Other traditions tell that he was married previously and that the “brothers” of Jesus were half brothers from Saint Joseph’s previous marriage. Scripture tells us he was a carpenter and that Jesus was known as the “carpenter’s son” (Mt. 13:55). Joseph may have been more precisely a builder, who worked with the native stone so common to Palestinian construction.

A Jewish ritual bath made of stone discovered beneath the church of Saint Joseph in Nazareth, a church which long tradition says was built over the Holy Family’s home, may be Joseph’s very own handiwork. A firm tradition teaches that Saint Joseph died long before his Son’s death. This is based not on biblical evidence but on the lack of it. It can be reasonably presumed that Saint Joseph would have been present at his Son’s crucifixion, as was Mary. Yet no mention is made of him being there.

From this absence, biblical scholars have, from the beginning of the Church, surmised that Saint Joseph was by then dead. Thus, Saint Joseph is the Patron Saint of a Happy Death, because he presumably died with Jesus and the Virgin Mary at his side. This is how all of us want to die, with Christ holding our hand on one side of the bed and the Virgin Mary seated beside us on the other side. 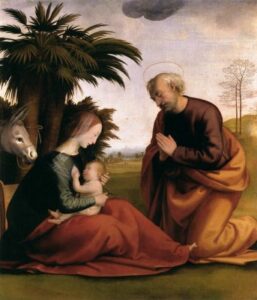 The first appearance of Joseph is in the gospels of Matthew and Luke, often dated from around 80–90 AD. Each contains a genealogy of Jesus showing ancestry from King David, but through different sons; Matthew follows the major royal line from Solomon, while Luke traces another line back to Nathan, another son of David and Bathsheba. Consequently, all the names between David and Joseph are different.

Like the two differing genealogies, the infancy narratives appear only in Matthew and Luke and take different approaches to reconciling the requirement that the Messiah be born in Bethlehem with the tradition that Jesus in fact came from Nazareth. In Matthew, Joseph obeys the direction of an angel to marry Mary.

Following the birth of Jesus in Bethlehem, Joseph is told by an angel in a dream to take the family to Egypt to escape the massacre of the children of Bethlehem planned by Herod, the ruler of the Roman province of Judea. Once Herod has died, an angel tells Joseph to return but to avoid Herod’s son, and he takes his wife and the child to Nazareth in Galilee and settles there.

In the Gospel book of Luke, Joseph already lives in Nazareth, and Jesus is born in Bethlehem because Joseph and Mary have to travel there to be counted in a census. Subsequently, Jesus was born there. Luke’s account makes no mention of him being visited by angels (Mary and various others instead receive similar visitations), the Massacre of the Innocents, or of a visit to Egypt.

The last time Joseph appears in person in any of the canonical Gospels is in the narrative of the Passover visit to the Temple in Jerusalem when Jesus is 12 years old, which is found only in Luke. No mention is made of him thereafter. The story emphasizes Jesus’ awareness of his coming mission: here Jesus speaks to his parents (both of them) of “my father,” meaning God, but they fail to understand (Luke 2:41–51). 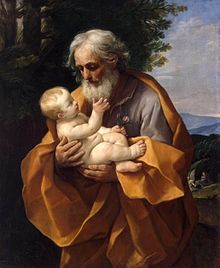 Christian tradition represents Mary as a widow during the adult ministry of her son. Joseph is not mentioned as being present at the Wedding at Cana at the beginning of Jesus’ mission, nor at the Passion at the end. If he had been present at the Crucifixion, he would under Jewish custom have been expected to take charge of Jesus’ body, but this role is instead performed by Joseph of Arimathea. Nor would Jesus have entrusted his mother to the care of John the Apostle if her husband had been alive.

While none of the Gospels mentions Joseph as present at any event during Jesus’ adult ministry, the synoptic Gospels share a scene in which the people of Nazareth, Jesus’ hometown, doubt Jesus’ status as a prophet because they know his family. In Mark 6:3, they call Jesus “Mary’s son” instead of naming his father.

In Matthew, the townspeople call Jesus “the carpenter’s son,” again without naming his father. (Matthew 13:53–55) In Luke 3:23 NIV: “Now Jesus himself was about thirty years old when he began his ministry. He was the son, so it was thought, of Joseph. In Luke the tone of the contemporary people is positive, whereas in Mark and Matthew it is disparaging.

This incident does not appear in John, but in a parallel story the disbelieving neighbors refer to “Jesus the son of Joseph, whose father and mother we know” (John 6:41–51). Joseph is venerated as Saint Joseph in the Catholic Church, Orthodox Church, Oriental Orthodox Church and Anglicanism. His feast day is observed by some Lutherans. In Catholic traditions, Joseph is regarded as the patron saint of workers and is associated with various feast days. 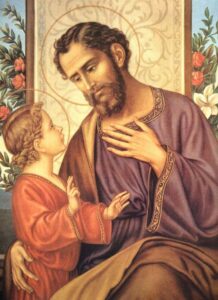 The month of March is dedicated to Saint Joseph. Pope Pius IX declared him to be both the patron and the protector of the Catholic Church, in addition to his patronages of the sick and of a happy death, due to the belief that he died in the presence of Jesus and Mary. Joseph has become patron of various dioceses and places. Being a patron saint of the virgins, too, he is venerated as “most chaste”. A specific veneration is tributed to the most chaste and pure heart of Saint Joseph.

Together with the Blessed Virgin Mary and the Child Jesus, Joseph is one of the three members of the Holy Family; since he only appears in the birth narratives of the Gospels, Jesus is depicted as a child when with him. The formal veneration of the Holy Family began in the 17th century by François de Laval. Joseph is Patron Saint of the Universal Church, fathers, carpenters, a happy death, workers, married people, persons living in exile, the sick and dying, and for a holy death.

In 1962, Pope John XXIII inserted the name of Joseph in the Canon of the Mass, immediately after that of the Blessed Virgin Mary. In 2013, Pope Francis had his name added to the three other Eucharistic Prayers. Since Joseph was a father to Jesus, his life is considered an example of what a father figure should look and be. Hence some cultures celebrate Father’s Day by honoring Saint Joseph and fathers together. The day is also celebrated by rehearsing a mixture of English, Italian and Spanish scriptures. 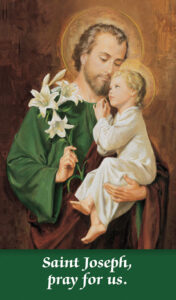 Saint Joseph, Patron of the Universal Church, guide all those under the care of their pastors to see not their imperfections but their God-given obligation to fulfill God’s plan. May your humble and faithful service inspire all fathers to lead their flocks with tenderness, wisdom, and strength. Amen