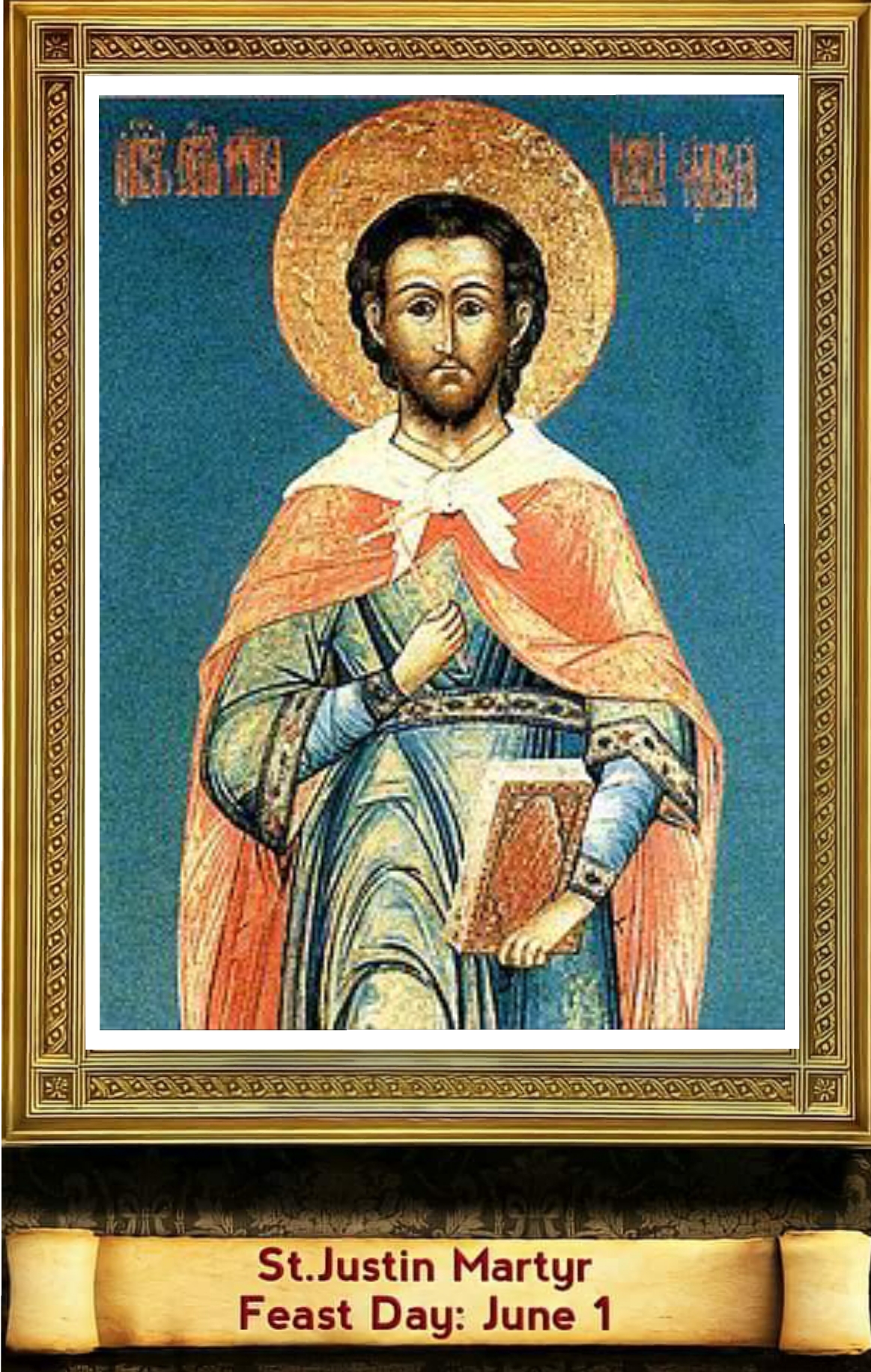 Saint Justin was a philosopher in the Greek tradition, born around 100 A.D. in Samaria to Greek parents. Saint Justin wrapped himself in the white, toga-style cloak of a Greek philosopher even after his conversion. He is the most well-known apologist of the second century, the only true Christian thinker known between the time of Saint John the Evangelist and Origen in the first half of the third century.

Justin mercilessly criticized the intellectual dead end of the ancient paganism in which he was raised, seeing it as not merely neutral but as an obstacle to discovering the truth. Justin loved the idea that Christ the Logos was the same in substance but different in person from the Father. Theological truth expressed in the concepts of Greek philosophy was very satisfying to him, because it was very true.

Justin also provided some of the very first words on the Holy Eucharist outside of the New Testament itself: “And this food is called among us the Eucharist…we (have) been taught that the food which is blessed by the prayer of His word, and from which our blood and flesh by transmutation are nourished, is the flesh and blood of that Jesus who was made flesh.” What a clear and remarkable testament to Christianity’s early belief in the Eucharist!

Most of his works are lost, but two apologies and a dialogue did survive. The First Apology, his most well-known text, passionately defends the morality of the Christian life, and provides various ethical and philosophical arguments to convince the Roman emperor, Antoninus, to abandon the persecution of the Church.

Further, he also indicates, as St. Augustine would later, regarding the “true religion” that predated Christianity, that the “seeds of Christianity” actually predated Christ’s incarnation. This notion allows him to claim many historical Greek philosophers (including Socrates and Plato), in whose works he was well studied, as unknowing Christians.

Justin moved to Rome to teach philosophy and spent decades there writing and interacting with the higher echelons of Roman society. But even a thoughtful intellectual was not immune from persecution for being a Christian. Sometime between 162 and 168 A.D., Justin and six companions were called to answer for their beliefs before the Prefect of Rome.

The record of the trial has been preserved and shows the Prefect demanding that Justin sacrifice to the gods of Rome. Justin and his friends refuse and are threatened with torture and death. They respond: “Do as you wish; for we are Christians, and we do not sacrifice to idols.” What bravado! They sternly refused to be idolaters. 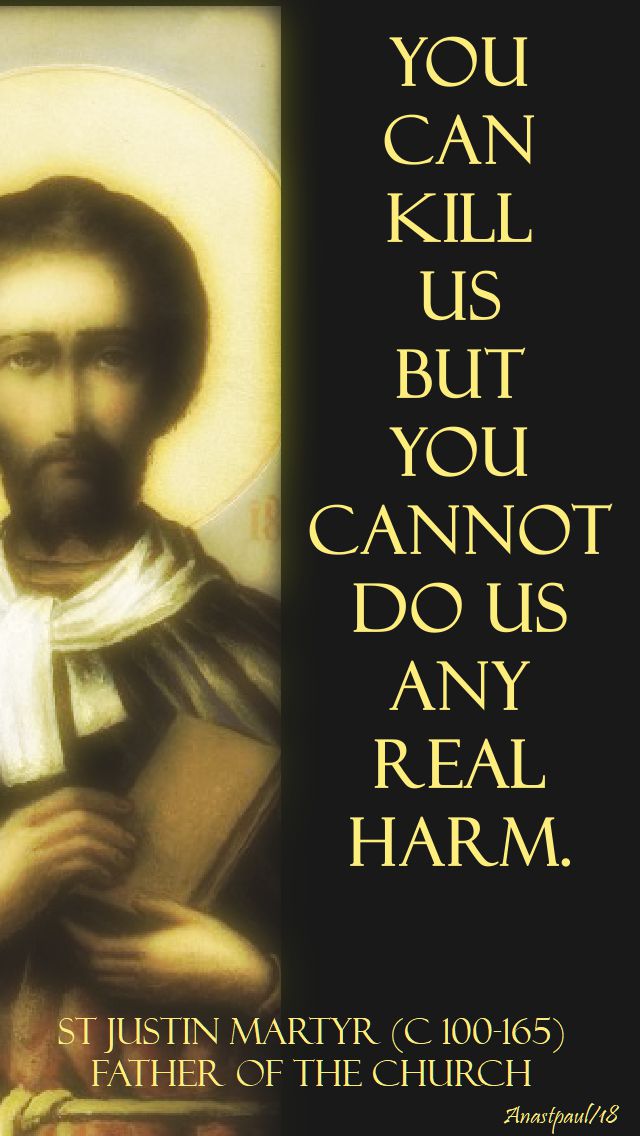 Justin chose, as the Church chose, the God of the philosophers over the false gods of paganism. This was a choice for truth over illusion. As Tertullian would later write: “Christ has said that he is truth, not custom” (De Virgin. Vel. 1, 1). The Christian God is both Father and the Prime Mover; the God of Jesus Christ and the Uncaused Causer; the God of Abraham, Isaac, and Jacob and thought thinking itself.

He is Father and He is Almighty. He is everywhere, because He is nowhere. He is paternal and close at hand but forever mysterious and inaccessible. He gives a name, “I am Who am,” which is a riddle. We take this complex understanding of God for granted today. But the labor of early Christians like Saint Justin Martyr dug the deep intellectual foundations into which were later driven the piers of sound doctrine. It takes very smart people to make simple points.

Justin was martyred, along with some of his students. They were duly led away, scourged, and beheaded. He is venerated as a saint by the Catholic Church, the Eastern Orthodox Church, the Oriental Orthodox Churches and in Anglicanism.

Lord God, we have received the gift of faith with little labor of our own. May we learn how to value it from those who reached it after long search, and lived in the misery of a world which did not know You.

Let us fear, as St. Justin did, the account we shall have to render for the gift of our faith in You, O Lord, in Jesus’ Name. Amen 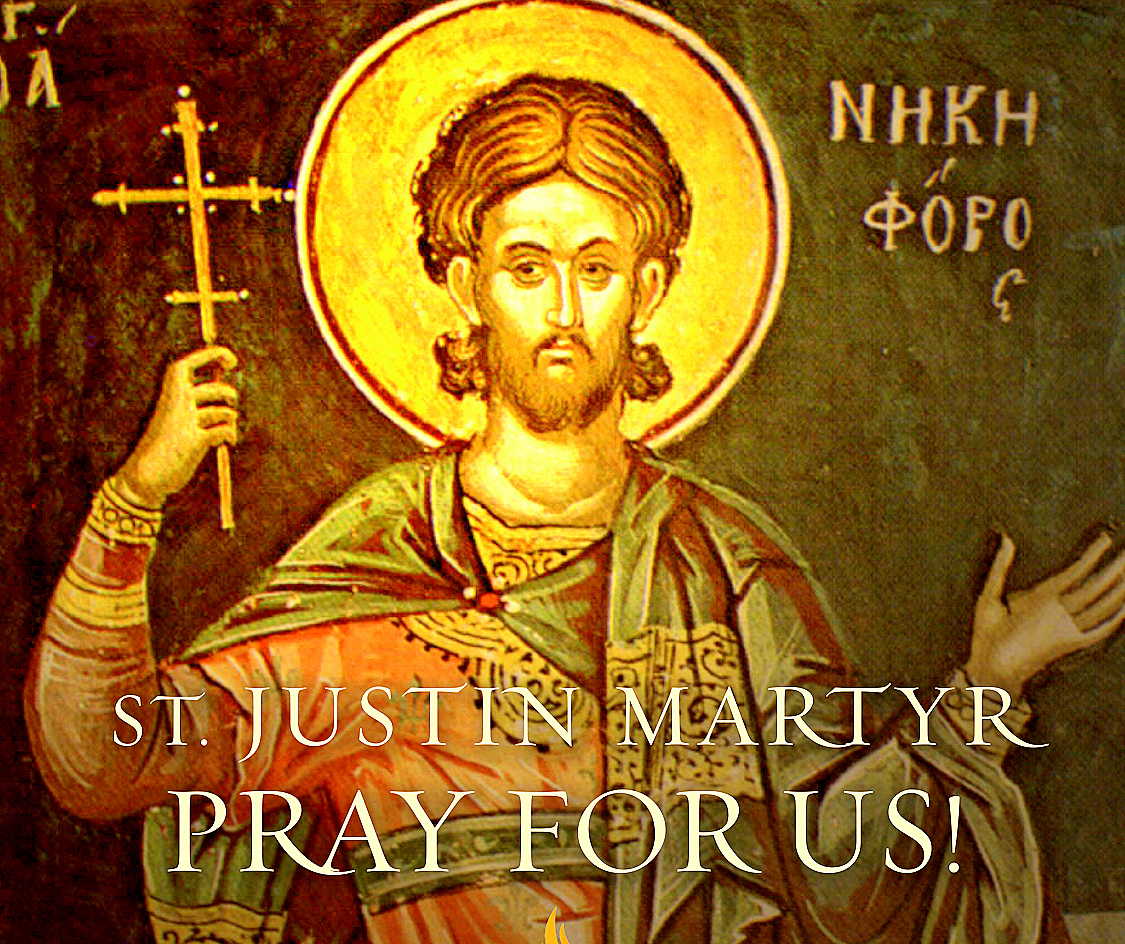 Saint Justin, you surrendered your life rather than worship an idol. Your refusal to abjure your faith gives an example to all Christian intellectuals and teachers that the deepest truths are not found only on a page but must be lived, and sacrificed for, even unto death. Saint Justin, pray for us.