Katharine Drexel (born Catherine Mary Drexel; November 26, 1858 – March 3, 1955) was an American heiress, philanthropist, religious sister, and educator. She was the second person born in what is now the United States to be canonized as a saint and the first one born a U.S. citizen.

Born to Hannah Langstroth, wife of banker Francis Anthony Drexel, she was expected to enter high society as an adult. Becoming known as a philanthropist, she met with the pope in 1887 to request missionaries for work with Native Americans and African Americans, and he suggested she become a nun herself. She did so, shocking the nation and founded the Sisters of the Blessed Sacrament, serving as its first mother superior.

In 1925, she founded what became Xavier University of Louisiana, the first and only Catholic HBCU. She also founded dozens of other primary schools around the country, and many parishes as well (especially when separate Black churches became a requirement under Jim Crow). The SBS sisters typically worked at the institutions.

Later in life, she became bedridden with illness, but continued to fund and staff missions. Upon her death in 1955, her inheritance was rerouted to other charities (as stipulated in her father’s will, since she had no children), but the SBS sisters continued her work. She was canonized in the year 2000 and her feast day is celebrated on March 3. She was inducted into the National Women’s Hall of Fame in 2011.

Drexel was born in Philadelphia, the second child of investment banker Francis Anthony Drexel and Hannah Langstroth. Hannah died five weeks after her daughter’s birth. For two years, Katharine and her sister, Elizabeth, were cared for by their aunt and uncle, Ellen and Anthony Drexel. When Francis married Emma Bouvier in 1860, he brought his two daughters home. A third daughter, Louisa, was born in 1863.

The girls were educated at home by private tutors. Their father believed they should learn geography first hand; accordingly, their parents took the girls on periodic tours of the United States and Europe. Three times a week, the Drexel family distributed food, clothing, and rent assistance from their family home at 1503 Walnut Street in Philadelphia. When widows or single women were too proud to come to the Drexels for assistance, the family quietly sought them out. As Emma Drexel taught her daughters, “Kindness may be unkind if it leaves a sting behind.”

As a young and wealthy woman, Drexel made her social debut in 1878. However, watching her stepmother’s three-year struggle with terminal cancer taught her the Drexel money could not buy safety from pain or death. Her life took a profound turn. She had always been interested in the plight of Native Americans, having been appalled by what she read in Helen Hunt Jackson’s A Century of Dishonor.

When her family traveled to the Western states in 1884, Katharine Drexel saw the plight and poverty of the Native Americans. She wanted to do something specific to help. Thus began her lifelong personal and financial support of numerous missions and missionaries in the United States. After her father died in February 1885, Katharine and her sisters contributed money to help the St. Francis Mission on South Dakota’s Rosebud Reservation.

For many years she took spiritual direction from a longtime family friend, Father James O’Connor, a Philadelphia priest who later was appointed vicar apostolic of Nebraska. When Katharine wrote him of her desire to join a contemplative order, Bishop O’Connor suggested, “Wait a while longer……. Wait and pray.”

Drexel and her sisters Elizabeth and Louisa were still mourning their father when they sailed to Europe in 1886. Their high-powered banker father left behind a $15.5 million estate and instructions to divide it among his three daughters after expenses and specific charitable donations. However, to prevent his daughters from falling prey to “fortune hunters,” Francis Drexel crafted his will so that his daughters controlled income from his estate. Still, upon their deaths, their inheritance flowed to their children.

The will stipulated that if there were no grandchildren, upon his daughters’ deaths, Drexel’s estate would be distributed to several religious orders and charities—the Society of Jesus, the Christian Brothers, the Religious of the Sacred Heart, a Lutheran hospital and others. Because their father’s charitable donations totaled about $1.5 million, the sisters shared the income produced by $14 million—about $1,000 a day for each woman. In current dollars, the estate would be worth about $400 million.

Drexel’s father had been on the board of both St. John’s Orphan Asylum for Boys and St. Joseph’s Female Orphan Asylum. Louise was particularly concerned as to the future of the young men after they left the orphanage. She and Elizabeth founded the St. Francis Industrial School at Eddington, Pennsylvania, in honor of their father. Elizabeth died in 1890 from complications of childbirth.

In 1889, Louisa married General Edward Morrell. The Morrells “actively promoted and advanced the welfare of African Americans throughout the country. The Morrells used their wealth to build magnificent institutions that served and aided African Americans’ education and upward mobility. Gen. Morrell took charge of the Indian work, while Katharine Drexel was in her novitiate.”

In January 1887, the sisters were received in a private audience by Pope Leo XIII. They asked him for missionaries to staff some Native American missions that they had been financing. To their surprise, the Pope suggested that Katharine become a missionary herself.

Although Drexel had already received marriage proposals, after consultation with her spiritual director, Bishop James O’Connor, she decided to give herself totally to God, along with her inheritance, through service to American Indians and Afro-Americans. Her uncle, Anthony Drexel, tried to dissuade her from entering religious life, but she entered the Sisters of Mercy Convent in Pittsburgh in May 1889 to begin her six-month postulancy.

Her decision rocked Philadelphia’s social circles. The Philadelphia Public Ledger carried a banner headline: “Miss Drexel Enters a Catholic Convent—Gives Up Seven Million.” On February 12, 1891, Drexel professed her first vows as a religious sister, dedicating herself to work among the Native American and African-Americans in the western and southwestern United States. She took the name Mother Katharine, and, joined by thirteen other women, soon established a religious congregation, the Sisters of the Blessed Sacrament.

The small community used the Drexel summer home St. Michel, in Torresdale until a convent was built. In 1892, the sisters moved into St. Elizabeth’s Convent. Mother Frances Cabrini had advised Drexel about the “politics” of getting her new Order’s Rule approved by the Vatican bureaucracy in Rome. A few months later, Philadelphia Archbishop Ryan blessed the cornerstone of the new motherhouse under construction in Cornwells Heights, Pennsylvania. In the first of many incidents that indicated Drexel’s convictions for social justice were not shared by all, a stick of dynamite was discovered near the site.

After three and a half years of training, she and her first band of nuns opened a boarding school, St. Catherine’s Indian School, in Santa Fe, New Mexico. In 1897, Mother Drexel asked the friars of St. John the Baptist Province of the Order of Friars Minor (Franciscans) in Cincinnati, Ohio, to staff a mission among the Navajos in Arizona and New Mexico on a 160-acre tract of land she had purchased two years earlier. Mother Katharine Drexel stretched the Cincinnati friars apostolically since most of them previously had worked in predominantly German-American parishes. 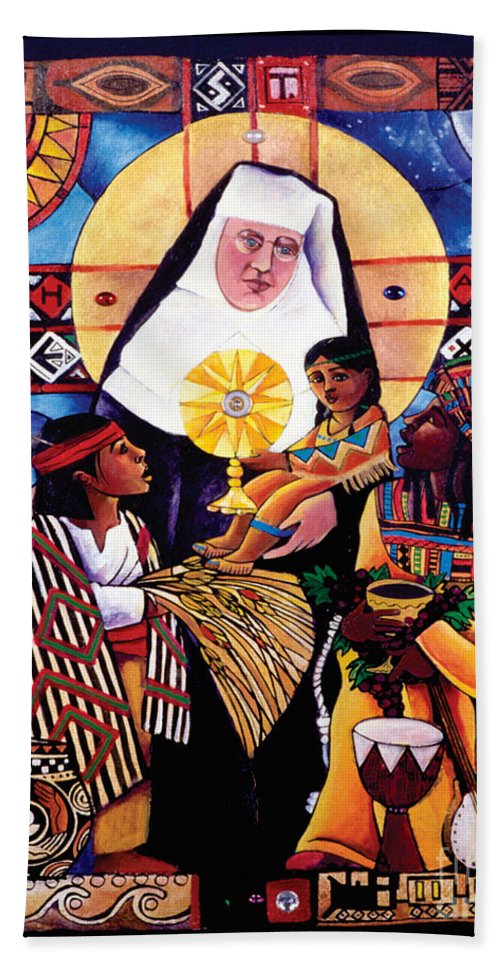 A few years later, she also helped finance the friars’ work among the Pueblo Native Americans in New Mexico. In 1910, Drexel funded the printing of 500 copies of A Navajo-English Catechism of Christian Doctrine for the Use of Navajo Children, written by Fathers Anselm, Juvenal, Berard, and Leopold Osterman. About a hundred friars from St. John the Baptist Province started Our Lady of Guadalupe Province in 1985, and continue to work on the Navajo reservation with the Sisters of the Blessed Sacraments.

Drexel established 145 missions, 50 schools for African Americans, and 12 schools for Native Americans. Xavier University of Louisiana, the only historically black Catholic college in the US, also owes its existence to Drexel and the Sisters. Mother Katharine Drexel died at the age of 97, on March 3, 1955, at her order’s motherhouse in Cornwells Heights, Pennsylvania, where she was buried until 2018.

Her cause for beatification was introduced in 1966. Pope John Paul II formally declared Drexel “Venerable” on January 26, 1987, and beatified her on November 20, 1988, after concluding that Robert Gutherman was miraculously cured of deafness in 1974 after his family prayed for Mother Drexel’s intercession.

Mother Drexel was canonized on October 1, 2000, one of only a few U.S. born saints and the first natural-born U.S. citizen saint (Elizabeth Ann Seton, who was born in what became the United States, was canonized in 1975). Canonization occurred after the Vatican determined that two-year-old Amy Wall had been miraculously healed of nerve deafness in both ears through Katharine Drexel’s intercession in 1994.

Dear God, your humble saint Katherine professed deep love of the Eucharist and worked towards the unity of all peoples with courage and initiative in addressing social inequality among minorities.

Her beliefs, selfless service and donation of her inheritance for victims of injustice, makes her a model for the Christian cause of uplifting our fellowmen. May her intercession bring peace among races, in Jesus’ Name. Amen

Saint Katherine Drexel, pray for us.