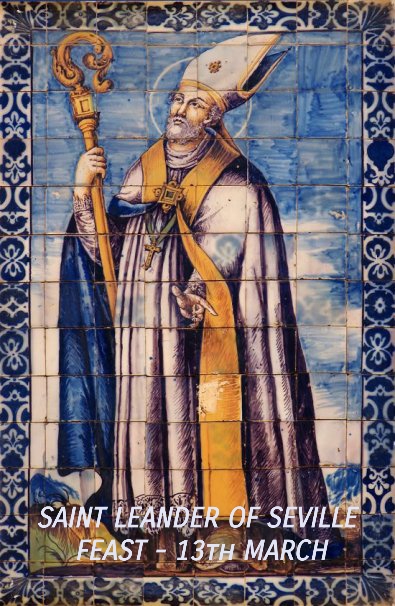 St Leander of Seville was the son of Severianus and Theodora. He was born in 534 AD at Cartagena, Spain. His family was known for their sanctity. They belonged to an elite family of Hispano-Roman stock of Carthago Nova. Their father is claimed to have been a dux or governor of Cartagena, though this seems more of a fanciful interpretation since Isidore simply states that he was a citizen. The family were staunch Catholics, as were most of the Romanized population. The Visigothic nobles and the kings were Arians.

The family moved to Seville around 554. The children’s subsequent public careers reflect their distinguished origin. Leander and Isidore both became bishops of Seville, and their sister Saint Florentina was an abbess who directed forty convents and one thousand nuns. The third brother, Fulgentius, was appointed Bishop of Écija. All four siblings are considered saints of the Roman Catholic Church.

There was less Visigothic persecution of Catholics than legend and hagiography have painted. From a modern standpoint, the dangers of Catholic Christianity were more political. The Catholic hierarchy were in collusion with the representatives of the Eastern Roman or Byzantine emperor, who had maintained a considerable territory in the far south of Hispania ever since his predecessor had been invited to the peninsula by the former Visigothic king several decades before.

Leander, enjoying an elite position in the secure surroundings of tolerated Catholic culture in Seville, became, around 576, a Benedictine monk, and then in 579 he was appointed bishop of Seville. In the meantime he founded a celebrated school, which soon became a center of Catholic learning. As bishop he had access to the Catholic Merovingian princess Ingunthis, who had come as a bride for the kingdom’s heir, and he assisted her to convert her husband Hermenegild, the eldest son of Liuvigild.

Leander defended the new convert even when he went to war with his father “against his father’s cruel reprisals”. Pierre Suau puts it, “In endeavoring to save his country from Arianism, Leander showed himself an orthodox Christian and a far-sighted patriot.” St Leander converted both Saint Hermengild and Prince Reccared, the sons of the Arian Visigoth King Leovigild, who then exiled Leander to Constantinople from 579 to 582.

When the rebellion failed, he withdrew to Byzantium – perhaps quite hastily – from 579 to 582. It is possible, but not proven, that he sought to rouse the Byzantine Emperor Tiberius II Constantine to take up arms against the Arian king; but in any case the attempt was without result. He profited, however, by his stay at Byzantium to compose works against Arianism, and there became acquainted with the future Pope Gregory the Great, at that time legate of Pope Pelagius II at the Byzantine court.

A close friendship united the two men, and some of their correspondence survives. It was he who recommended that Gregory write his famous commentary (Moralia) on the book of Job. In 585, Liuvigild put to death his intransigent son Hermenegild, who is a martyr and saint of the Catholic Church and also of the Eastern Orthodox Church. Liuvigild himself died in 589. It is not known exactly when Leander returned from exile, but he had a share in the conversion of Reccared the heir of Liuvigild, retaining an influence over him.

When Reccared levitated the throne, St Leander was allowed to go back to Seville. He worked against Arianism and presided over the Third Council of Toledo on 589. Leander revised and unified the Spanish liturgy, and his boundless energy and steady faith led the Visigoths back to orthodox Christianity. He wrote an influential Rule for nuns. Leander introduced the Nicene Creed to Mass in the west. He was honored as a Doctor of the Faith by the Church in Spain. 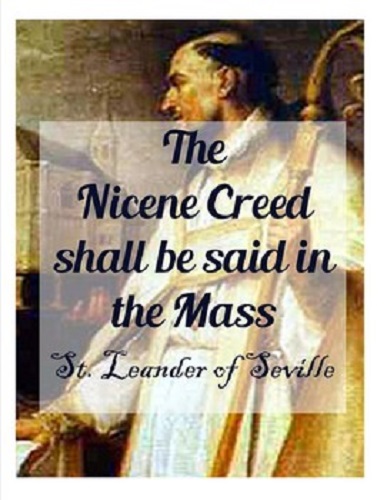 Leander introduced the recitation of the Nicene Creed at Mass, as a way to help reinforce the faith of his people against Arianism.] In 589, he convoked the Third Council of Toledo, where Visigothic Hispania abjured Arianism. Leander delivered the triumphant closing sermon which his brother Isidore entitled Homilia de triumpho ecclesiae ob conversionem Gothorum (“a homily upon the triumph of the Church and the conversion of the Goths”.

On his return from this council, Leander convened a synod in his metropolitan city of Seville (Conc. Hisp., I), and never afterwards ceased his efforts to consolidate the work of extirpating the remains of Arianism, in which his brother and successor St. Isidore was to follow him. The city of San Leandro in the US state of California is named after St. Leander. His feast day is 13 March in the Catholic Church.

Almighty God, we believe that the Father, the Son, and the Holy Spirit are consubstantial, three Person’s in one Essence, one Divinity. This is the one, true faith, which is prophetic, evangelical and apostolic.

Saint Leander of Seville maintained this Creed, introducing it as the Nicene Creed to reinforce the faith of his people, and as an antidote against the heresy of the Arians who denied this Divinity.

Help us to propagate this Truth, just as your saint Leander of Seville did. In Jesus’ Name. Amen 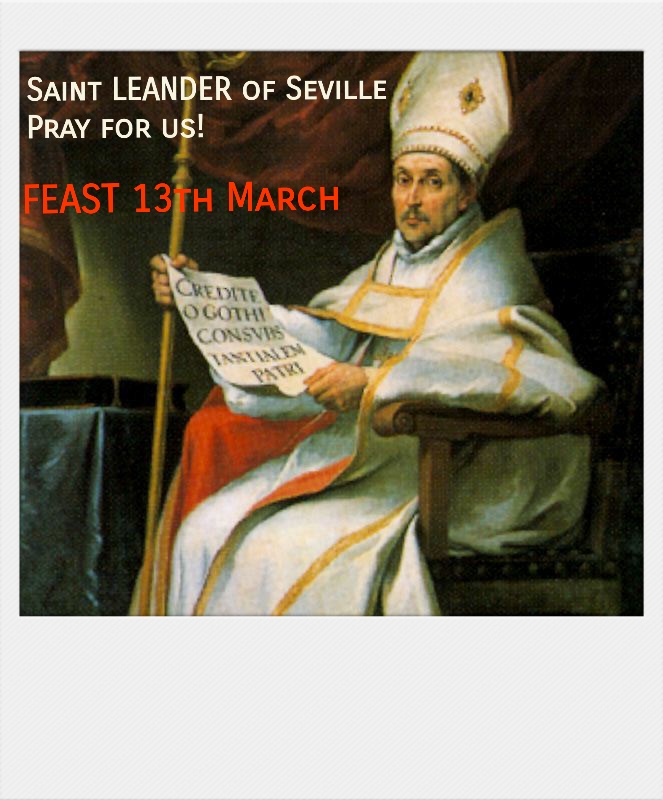 Glorious St Leander, your promotion of the Nicene Creed reminds us of the beauty and importance of this prayer and we thank you for this invaluable contribution to the faith. Saint Leander, pray for us. Amen