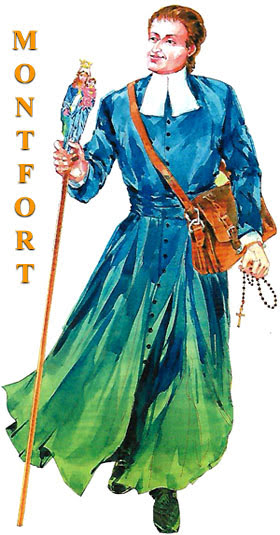 Louis Marie Grignion (1673 – 1716) was born in the hamlet of Montfort, a Breton village about thirteen miles east of Rennes, on 31 January 1673. Later, as an itinerant preacher, he preferred to drop his surname and be called simply Louis Marie de Montfort, or le Pére de Montfort, the Father from Montfort. Second of eighteen children, Louis was one of the few who survived to adulthood. He was born into a family of deep Catholic faith, in an area of France renowned for its dynamic Christian life.

At the age of eleven, Louis Marie set out for Rennes, the capital of Brittany, to enroll in the Jesuit College of Thomas à Becket. The young student from Montfort was considered by his teachers to be intelligent, religious, artistic in nature and somewhat shy. It was under the guidance of the Jesuits that Louis’s priestly vocation matured.

The decision to enter the priesthood was made, at the Shrine of Our Lady in the Carmelite Church in Rennes. After eight years at the Jesuit College, Louis Marie decided to pursue his theological studies at Saint Sulpice in Paris. At the age of nineteen, a new chapter opened in his life. The young man bade farewell to family and friends at the bridge of Cess on the outskirts of Rennes.

Having left all, he crossed the Cesson bridge to a new life of total dependence upon Divine Providence. So convinced was he that God was truly his loving Father that he gave his money, baggage and clothes to the first beggars he met. Begging for along the way, he walked to Paris, in the rags of a mendicant. For the first two years, Montfort attended classes at the Sorbonne. 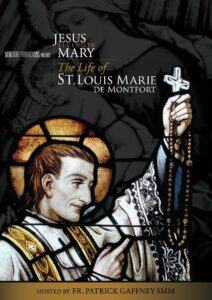 The following six years of theological study, however, were spent under the tutelage of the Sulpicians themselves. Like the Jesuits, they found the student from Montfort to be a talented man of deep faith, intensely studious and strongly devoted to Our Lady. He was notable for the practical love he showed for the poor, for his desire to serve the outcasts of Paris society, and for a determination to live the gospel by identifying with the most neglected.

All his life, especially as a seminarian, Montfort was an avid reader, and thoroughly enjoyed his task as librarian at Saint Sulpice. Above all else, he was a man of the Bible. The Sacred Scriptures were his constant companion, and his sermons and writings – five major works in all – abound with biblical texts. Louis yearned to proclaim the Good News of God’s love to the outcasts, to assure them of the love of Jesus and of the maternal care of Mary.

At the Lady Chapel in the parish church of Saint Sulpice, Father Louis Marie Grignion celebrated his first Mass on 5 June 1700. From the age of eleven, he had completed sixteen years of formal study to reach this goal. Yet Montfort’s priestly ministry itself would last only a further sixteen years.

After a few years of preaching parish renewals and ministering to the destitute at the poor-house at Poitiers, Louis Marie was far from settled. He found it extremely difficult to discover how to implement his belief that God was calling him to serve the poor and to identify with them. 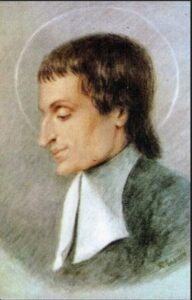 His solution was simple. This unknown young priest from western France would seek the advice of the Pope. And so he set out on foot from Poitiers, begging for food and shelter along the arduous and dangerous routes to the Holy City.
In June 1706, Montfort met with Pope Clement XI (Giovanni Fancesco Albani 1700 – 21), pouring out his heart to the Vicar of Christ. Strangely, the Holy Father clearly saw in this young priest extraordinary gifts of God.

He turned down Louis Marie’s offer to proclaim the gospel in the wilds of Canada or in the Far East. The Pope named him Apostolic Missionary, telling him to return to his native land and renew the Church there. He spent the rest of his life conducting approximately two hundred missions and retreats throughout the villages and towns of western France, proclaiming the gospel of God’s love with Spirit-filled power.

De Montfort’s bold, charismatic proclamation of God’s love was heard in churches, barracks, poor-houses, and even in houses of prostitution. His preaching was a source of admiration for many, of resentment and, sadly, anger for others. His life-style as a poor, vagabond preacher, with a knapsack strung across his shoulder to carry his Bible, breviary and notebooks, was not considered dignified for a cleric.

Several times the episcopal authorities forbade him to preach in one diocese or another. Always obedient, Montfort would move on. With utter disdain for human respect, this saintly man identified with the poor, and found his greatest joy in opening for them the Word of God and offering them whatever material help he could locate. 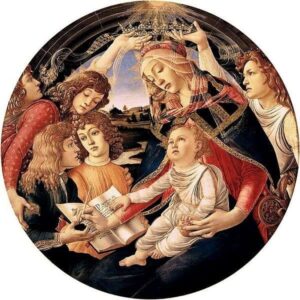 Typical of his actions was the event recorded in Dinan – probably one of many similar acts on his part – when the missionary tenderly embraced a dying, leprous beggar lying in the street, and carried him to a nearby religious house, crying out to the doorkeeper: ‘Open up to Jesus Christ!’ To the majority of the people, Louis Marie was simply the Good Father from Montfort, or the Father with the Big Rosary, for he ordinarily had a large rosary attached to the cord-like belt of his cassock.

His preaching, flowing from his own experience of God’s love and Mary’s maternal care, attracted thousands back to the faith. In a Jansenistic age which harshly stressed the distance between God and his people, he recommended even daily communion, a tender devotion to the Mother of God, and a total surrender to Jesus in Mary.

Because of the style and contents of his preaching, this Elijah-like prophet was regarded by quite a few as no more than a strange misfit. He was poisoned on one occasion and, although it did not prove fatal, it caused his health to deteriorate even more rapidly. Other attempts were made on his life, yet Montfort was not deterred.

The Bishop of La Rochelle, Mgr Stephen de Champflour, proved a great friend to him, although others continued to oppose him, and there was even an attempt made on his life. Together with the Bishop, he established free schools for the poor boys and girls of La Rochelle, and called Marie Louise Trichet and Catherine Brunet, who had waited patiently in Poitiers for 10 years, to come to help him. 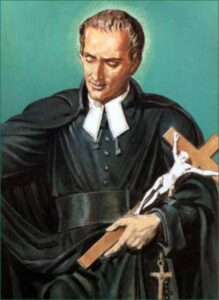 At last, they made their religious profession and the congregation of the Daughters of Wisdom was born. Soon there were others too who joined them. Worn out by hard work and sickness, Louis Marie finally came in April 1716 to Saint-Laurent-sur-Sèvre to begin the mission which was to be his last. During it, he fell ill and died on 28 April. Thousands gathered for his burial in the parish church, and there were stories of miracles performed at his tomb.

His writings call for a loving, formal acceptance of who we truly are: the slaves of Jesus Christ. The term ‘slave’ always had, for Montfort, the evangelical connotation that we belong to the Lord, that we are loved by him, and that we are redeemed by the Incarnation and total offering of the Incarnate Wisdom for us.

But the surest, the easiest, the happiest, the most perfect way to Jesus Christ is through Mary. And this brings us to the great genius of Saint Louis Marie in explaining Our Lady’s role in the redemption of mankind. In his treatise on True Devotion To The Blessed Virgin, he wrote, “It is through the most holy Virgin Mary that Jesus came into the world, and it is also through her that he has to reign in the world. 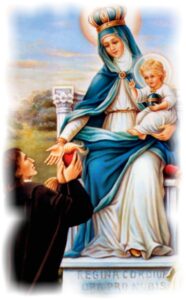 It was through Mary that the salvation of the world was begun, and it is through Mary that it must be consummated. He who has not Mary for his Mother has not God for his Father. “It is necessary for the greater knowledge and glory of the Most Holy Trinity, that Mary should be more than ever known. Mary must shine forth more than ever in mercy, in might, and in grace in these later times:

1. In MERCY to bring back and lovingly receive the poor strayed sinners who shall be converted and shall return to the Catholic Church;
2. In MIGHT, against the enemies of God, idolaters, schismatics, Jews, and souls hardened in impiety, who shall rise in terrible revolt against God.
3. and finally, she must shine forth in GRACE, in order to animate and sustain the valiant soldiers and faithful servants of Jesus Christ, who shall battle for His interests.

St. Louis De Montfort founded two religious orders: the Daughters of Wisdom, begun in 1703 from a number of poor and afflicted girls at the Hospital of Poitiers, where he was temporary chaplain, and the Missionaries of the Company of Mary [Montfort Fathers and Brothers], founded in 1715. The Brothers of St. Gabriel, a teaching order, also claim St. Louis De Montfort as their spiritual father. 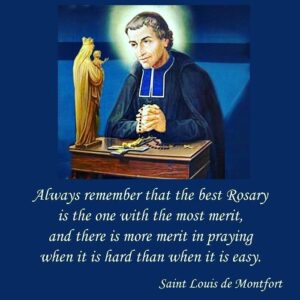 At the Saint’s beatification investigation, many witnesses testified that during his life they had heard struggles between him and the devil, including the sound of fist blows and the swish of whips. He exhausted his great physical strength by his apostolic labors. On his death-bed in Saint-Laurent-sur-Sevre, at age 43, he kissed the Crucifix and a statue of the Blessed Mother. Apparently speaking to the devil, he exclaimed: “In vain do you attack me; I am between Jesus and Mary! I have finished my course: All is over. I shall sin no more!” 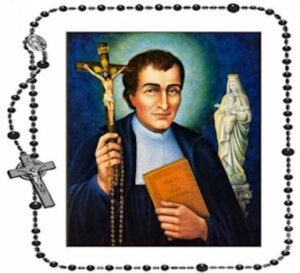 St. Louis de Montfort, you consecrated yourself to Jesus through Mary in your earthly life and are even more fully devoted to them now in Heaven. I ask that you present my petitions before our most blessed Mother, who will in turn place them at the feet of her Son.

In the Name of the Father, and of the Son and of the Holy Spirit. Amen 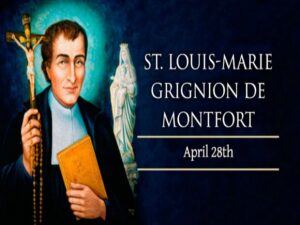