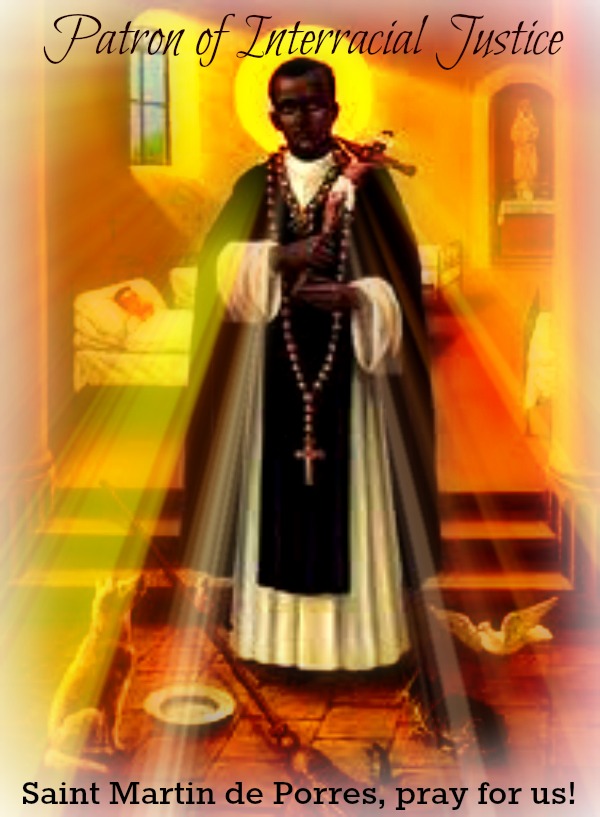 St. Martin de Porres was born in Lima, Peru on December 9, 1579. Martin was the illegitimate son to a Spanish gentlemen and a freed slave from Panama, of African or possibly Native American descent. At a young age, Martin’s father abandoned him, his mother and younger sister, leaving them to grow up in deep poverty. After two years in primary school, Martin was given to work with a barber/surgeon where he would learn to cut hair and the medical arts.

Martin, when 15, experienced a lot of racial discrimination. In Peru, by law, all descendants of African or Indians were not allowed to become full members of religious orders. Martin, a very prayerful lad, asked the Dominicans of Holy Rosary Priory in Lima to accept him as a volunteer who performed the most menial tasks in the monastery. In return, he would be allowed to wear the habit and live within the religious community. He, very slowly, was moved up to officer in charge.

After eight more years with the Holy Rosary, Martin was granted the privilege to take his vows as a member of the Third Order of Saint Dominic by the prior Juan de Lorenzana who decided to disregard the law restricting Martin, based on race. But many of the members in the Holy Rosary were not as open-minded as Lorenzana; Martin was mocked for being illegitimate and descending from slaves. Martín suffered taunts, but held his peace. He was God’s servant and that of his brothers, even if they were cruel.

He grew to become a Dominican lay brother in 1603 at the age of 24. Ten years later, after he had been presented with the religious habit of a lay brother, Martin was assigned to the infirmary where he would remain in charge until his death. He became known for encompassing the virtues needed to carefully and patiently care for the sick, even in the most difficult situations, regardless of race or wealth, from Spanish nobles to African slaves.

Martin’s life reflected his great love for God and all of God’s gifts. It is said he had many extraordinary abilities, including aerial flights, bilocation, instant cures, miraculous knowledge, spiritual knowledge and an excellent relationship with animals. He founded an orphanage for abandoned children and slaves and is known for raising dowry for young girls in short amounts of time. During an epidemic in Lima, many of the friars in the Convent of the Rosary became very ill. Locked away in a distant section of the convent, they were kept away from the professed.

However, Martin passed through the locked doors to care for the sick, and became disciplined for not following the rules of the Convent, but after replying, “Forgive my error, and please instruct me, for I did not know that the precept of obedience took precedence over that of charity,” he was given full liberty to follow his heart. Love was stronger than societal custom.

People felt the love in him. They began to say that he could cure the sick just by bringing them a glass of water. Once Martín carried a dirty beggar covered with sores to his room to tend to him. Another friar scolded him, for the sick man was filthy. Martín responded, “Compassion, my brother, is preferable to cleanliness.” Many of the friars, sensing his wisdom and love, approached him for spiritual direction.

Martin’s heart followed the precept of charity – love of God and love of neighbor with a single, unified love – until his death on 3rd November 1639, at the age of 59. His fellow friars and the city already knew: this “poor mulatto” who served the poor because he was one of them, this simple friar who humbled the proud, was their brother.  In an almost superfluous sign, it was as if God smiled and agreed, when Martín’s body was found to be incorrupt 25 years after he died.

He was beatified in 1837 by Pope Gregory XVI and canonized in 1962 by Pope John XXIII. He is the patron saint of mixed-race people, barbers, innkeepers, public health workers, and all those seeking racial harmony. His feast day celebration is 3rd November. 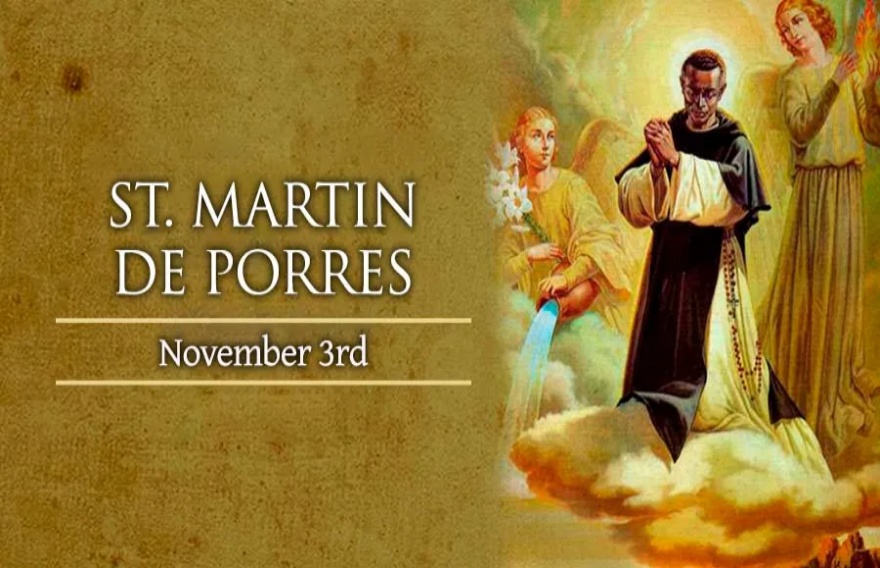 Most humble St. Martin, whose burning charity embraces all, but especially those who are sick, afflicted, or in need, we turn to thee for help in our present difficulties and we implore thee to obtain for us from God health of soul and body, and in particular the favour we now ask … (pause to ask favours).

May we, by imitating thy charity and humility, find quiet and contentment all our days, and cheerful submission to God’s holy will in all the trials and difficulties of life. Amen.