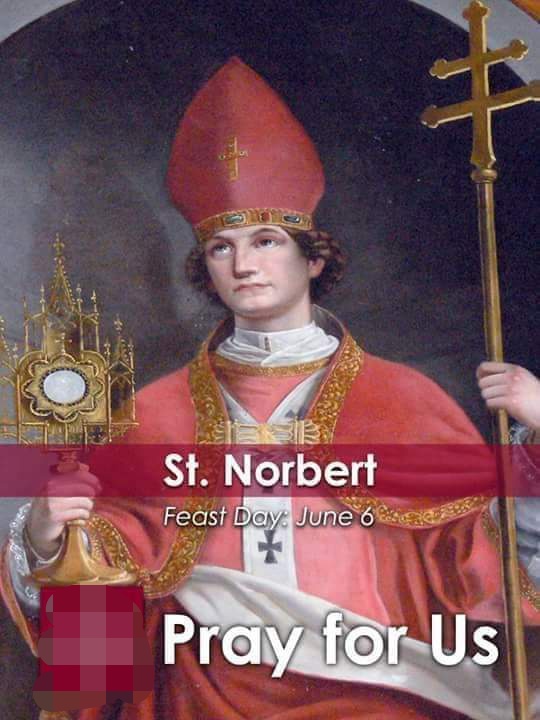 Saint Norbert of Xanten (1080-1134), a worldly noble converted much like Saint Paul, who became a zealous preacher and bishop. The life of Saint Norbert reminds us that it is never too late to repent, turn our broken selves to the Lord, and become whole in His ministry.

Norbert was born in Xanten (now Germany), and grew up in the royal court of Emperor Henry V. Norbert took the robes of a secular monastic order(refusing the priesthood, due to the restrictions it would place on his lifestyle), serving as the court’s chief alms gatherer. However, he embraced his position not out of obedience and love for the Lord, but rather as a career move and occupation which allowed him access to the emperor.

He, like most of the court, was governed by the principles of pleasure, and thought little of the implications of his lifestyle on his soul. One afternoon, when Norbert was about the age 35, he was out riding across the countryside for sport when a fierce thunderstorm arose. A lightning bolt opened up the ground, causing his horse to toss him to the ground, rendering him unconscious.

He lay in the heavy rain, on the ground, soiling his fancy clothes and well-coifed hair for hours, neither the rain nor the thunder reviving him. When he awoke, Norbert gazed at the stormy sky and asked, “Lord, what do you want me to do?” (the same words Saint Paul spoke on the road to Damascus.) In response to his question, Norbert heard, “Turn from evil and do good. Seek peace, pursue it.” 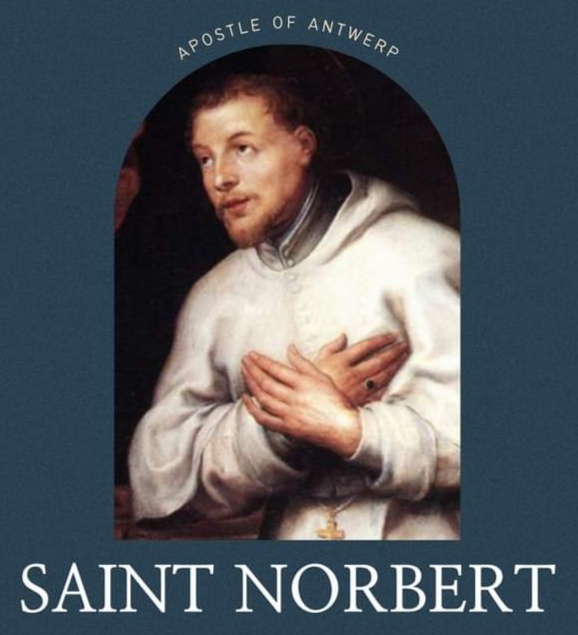 From that moment on, Norbert converted his life, and bore witness to those around him of the power of the Lord. He returned home, and committed himself to studying for the priesthood, a vocation he had previously avoided. He spent his days in prayer, fasting, and mortification—reparation for his lifetime of sinfulness. Labeled a hypocrite by many, Norbert gave away all of his worldly possessions to the poor, and for the remainder of his life, strove to own nothing.

He traveled to Rome, seeking an audience with the pope, begging permission to preach. The pope gladly commissioned Saint Norbert, who traveled throughout Europe, preaching to all who would listen. During his travels, Norbert—in penance for his sins—chose the most difficult paths and roads to take, walking barefoot, even during the harsh European winters.

Those who traveled with him oftentimes died from exposure to the elements, and while Norbert himself suffered, he maintained his health. Over time, he regained the respect of those who had labeled him hypocrite, and they, in turn, looked to him for guidance, preaching, and reform. Wholly devoted to the Holy Eucharist, Saint Norbert tirelessly defended the sanctity of the Blessed Sacrament.

He is credited for driving a heretic (Tanchelin) from Antwerp who repeatedly renounced the reality of the priesthood and blasphemed the Blessed Sacrament, removing it from the cathedral and hiding it. Saint Norbert, led by the Holy Spirit, rescued the monstrance, returning it unharmed to the cathedral, rekindling the people’s love and adoration of the Eucharist. 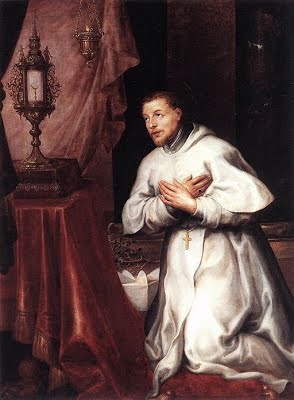 Norbert had garnered a reputation for orthodoxy, strict adherence to Church guidelines (not always the case at that time), and strict observance of the Dominican Rule. His model and life attracted many followers, and following a gift of land, Norbert began a small monastic community. This Augustinian community, eventually known as Norbertines (or Premonstratensians) grew to eight monasteries and two convents.

The order eventually swept through Europe, bringing with it a return to orthodoxy and reform. Norbert was eventually selected as bishop (and later archbishop) of Madgebourg. Legend tells us that upon arrival to his new bishop’s residence, the porter refused to let Norbert inside, believing him to be a beggar. The crowd who had accompanied the new bishop reprimanded the porter, but Norbert, such was his humility, gently told him, “You were right the first time.”

Upon Saint Norbert’s death, his remains were interred at Madgebourg, but many centuries later, moved to a Norbertine abbey of Stahov in Prague. At that time, his body was found to be incorrupt. When Norbert died in Magdeburg on 6 June 1134, both the canons at the cathedral and the canons at St. Mary’s Abbey claimed the body.

The two parties resorted to Lothair III who decreed the body should be buried in the Norbertine Abbey. In 1524, Martin Luther preached in the city and, as a result, Magdeburg became a Protestant city. Numerous attempts were made over the centuries by the Abbey of Strahov in Prague to retrieve Norbert’s body. Only after several military defeats at the hand of Emperor Ferdinand II was the abbot of Strahov able to claim the body.

On 2 May 1627 the body was finally brought to Prague where it remains to this day, displayed as an auto-icon in a glass-fronted tomb. Norbert was canonized by Pope Gregory XIII in the year 1582, and his statue appears above the Piazza colonnade of St. Peter’s Basilica in Rome.

Saint Norbert followed the rules of Saint Augustine, who undertook Church reform centuries earlier. His works led to true conversion of others, following the miraculous Godly conversion of himself. His life reminds us each to strive for our own true conversion, deep within ourselves, every day… remembering that it is never too late to turn to the Lord!

Heavenly Father, you gave us as a role model your appointed bishop Norbert, a zealous minister of your Church, well known for his preaching and pastoral ardor. Bless your Church with faithful shepherds to lead your chosen ones to eternal salvation.

Through our Lord Jesus Christ, your Son, who lives and reigns with you in the unity of the Holy Spirit, God for ever and ever. Amen 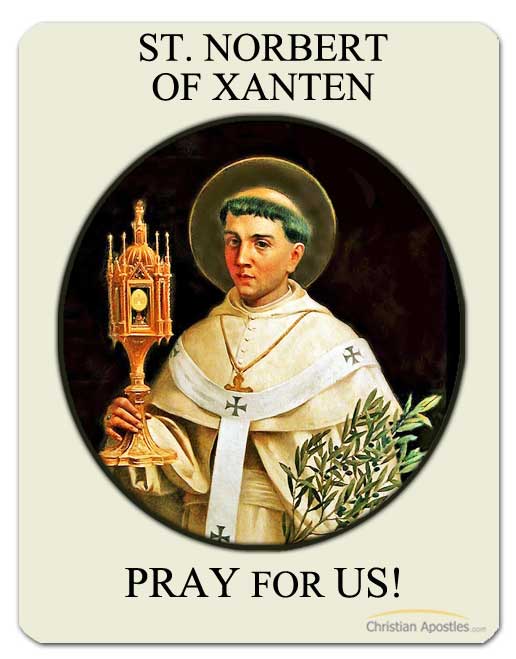 Saint Norbert, pray for us.