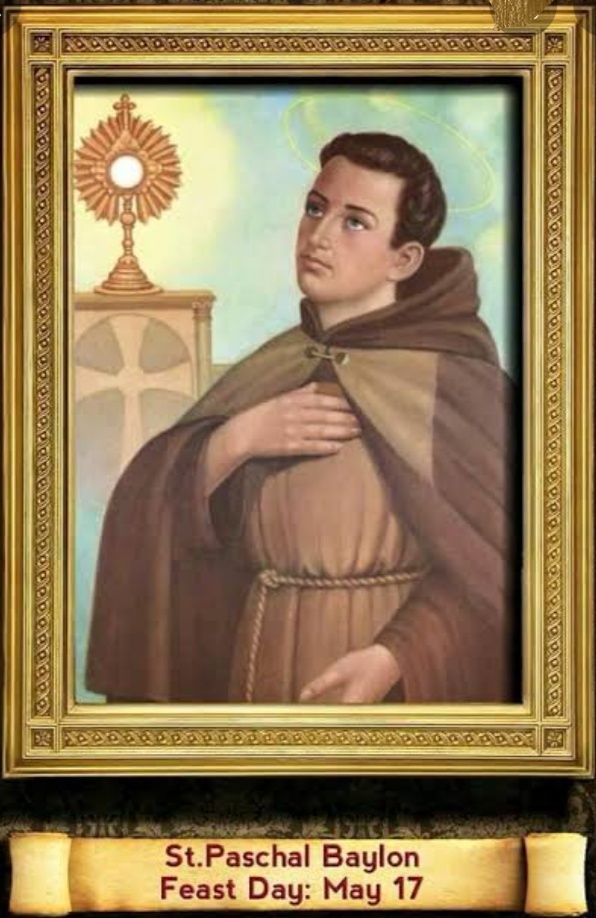 Paschal Baylón O.F.M. (16 May 1540 – 17 May 1592) was a Spanish Roman Catholic lay professed religious of the Order of Friars Minor. He served as a shepherd alongside his father in his childhood and adolescence, but desired to enter the religious life. He was refused once but later admitted as a Franciscan lay brother. He became noted for his strict austerities, and his love and compassion towards the sick.

He was sent to counter the arguments of the Calvinists in France but was chased out and nearly killed by a mob. He was best known for his strong and deep devotion to the Eucharist. Paschal Baylón was born on 16 May 1540 at Torrehermosa, in the Kingdom of Aragon, on the feast of the Pentecost to poor but pious peasants Martin and Elizabeth Jubera Baylón. The fact that he was born on the feast of Pentecost led to his parents naming him “Pascual” (Paschal). 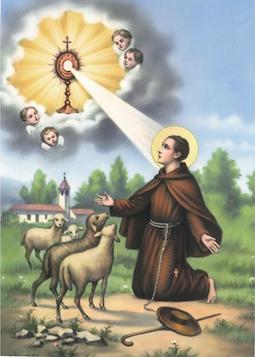 He spent his childhood and adolescence as a shepherd, and as he toiled in the fields remained attentive to the sound of the church bell which rang during the Elevation during the Mass. Paschal was very honest, and once offered to reimburse the owners of crops damaged due to his animals getting loose. He carried a book with him into the fields where he watched the sheep, and asked those he met to teach him the letters.

So, in a short time, being still quite young, he learned to read. Paschal in his poverty joined alms with his continual prayer; and not having any other means to relieve the poor, always gave them a good part of his own dinner which was sent him into the fields. Some of his companions were much inclined to cursing, quarrelling, and fighting, but learnt to hold their tongue in his presence since they respected his pious nature and his virtue.

Those to whom he first mentioned his inclination to a religious life, recommended several richly endowed monasteries, but he answered, “I was born poor and am resolved to die in poverty and penance”. In 1564 he joined the Reformed Franciscans as a religious brother and commenced his period of novitiate on 2 February before making his profession on 2 February 1565 in Orito at the Saint Joseph convent. 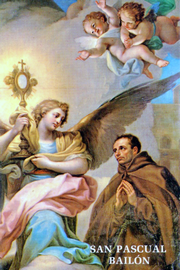 He was urged to become an ordained priest but he felt that was not the path for him. But he was once denied the chance to join on account of his age, prompting him to return to his duties as a shepherd before the order had a change of heart and admitted him into their ranks. He had never more than one habit, and that always threadbare. He walked without sandals in the snows, and in the roughest roads.

He accommodated himself to all places and seasons, and was always content, cheerful, mild, affable, and full of respect for all. His jobs included serving as a cook and porter as well as the gardener and the official beggar who went around asking for alms. He lived this life in contemplation and silent meditation and often did this as he worked. He was contemplative and had frequent visions.

He would spend the night before the altar in silence during some nights to commune with God and to meditate on the faith. But he also shrugged off those notions of him gaining a reputation coming from that pious nature. His superior sent him to France in 1576 to have him defend the Real Presence against the opinions of a Calvinist preacher.

But he was despised there and was almost killed after a Huguenot mob chased him out. Those chasing him hurled stones and dirt at him causing him to break his shoulder and become bruised. The humble friar never wasted food. The end of each week saw him eat a few boiled vegetables which had been soaked in water with the terrible smelling weed known as wormwood. 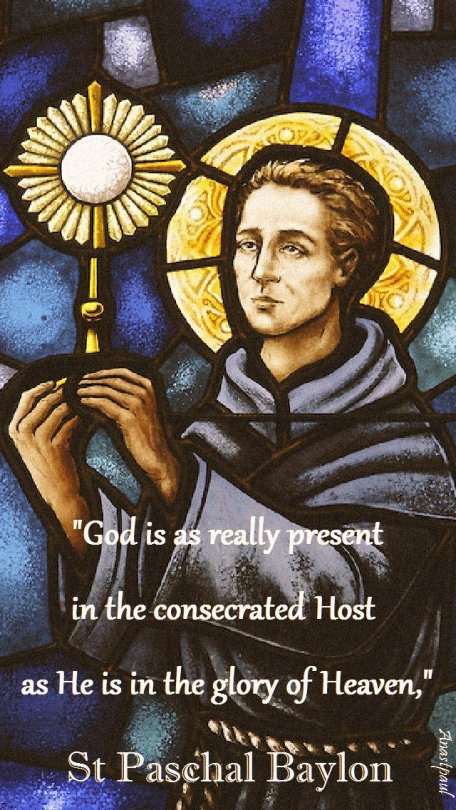 He often ate scraps from the kitchen. Other austerities included wearing a coat with steel spikes or a patched habit including one tunic lined with rough pig hair designed to cause discomfort. Sometimes he slept out in the cold. He died on 17 May after falling ill. This day is also his feast day. His tomb in Villarreal became an immediate place of pilgrimage and there were soon miracles that were reported at his tomb.

Pope Paul V beatified him on 29 October 1618, and Pope Alexander VIII later canonized him on 16 October 1690. In 1730, an indigenous Guatemalan claimed to have had a vision of a sainted Paschal appearing as a robed skeleton. This event became the basis of the heterodox tradition of San Pascualito.

He was enlisted in the church’s struggle against Modernism, part of which was through increasing devotion towards the Eucharist; Pope Leo XIII proclaimed the saint as the “seraph of the Eucharist” as well as the patron of Eucharistic congresses and affiliated associations. Art often depicts him wearing the Franciscan habit and bearing a monstrance to signify his devotion to the Holy Eucharist.

Pope John XXIII named the saint as the patron for the Segorbe diocese on 12 May 1961. During the Red Terror, at the time of the Spanish Civil War, his grave was desecrated and anticlerical leftists had his relics burned, though some remained. Those that did were later transferred in the presence of King Juan Carlos I on 12 May 1992.

Saint Paschal, you were filled by the Holy Spirit with a wonderful love for the sacred mysteries of the Body and Blood of Christ. Intercede for us now that we can obtain the grace of a deep faith and tender devotion for Jesus in the Blessed Sacrament.

We pray that we can draw from the Eucharist the same spiritual riches that you received with great joy, and that our lives reveal the enduring fruit of love, generosity and kindness, eliminating sadness from our lives. To the glory of God, our Father. Amen 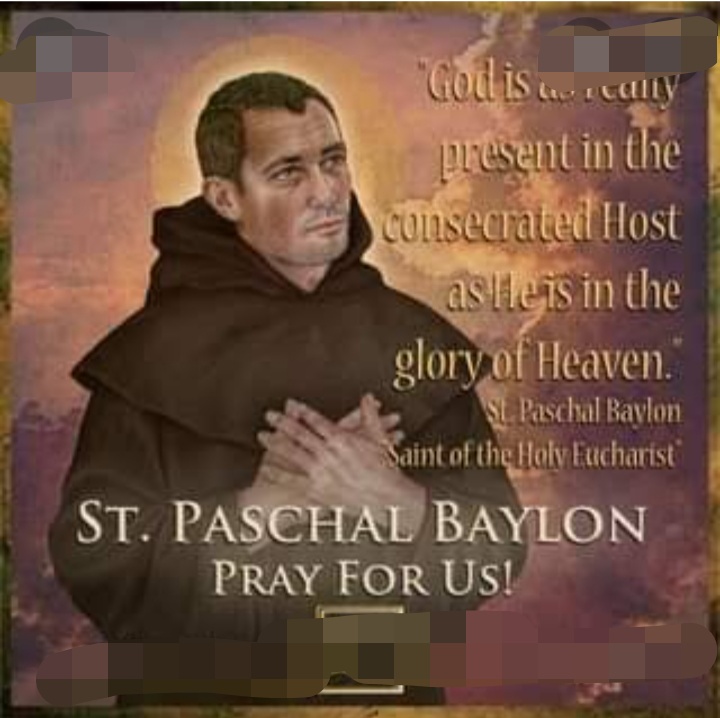 Saint Paschal Baylón, lover of the Eucharist, pray for us.