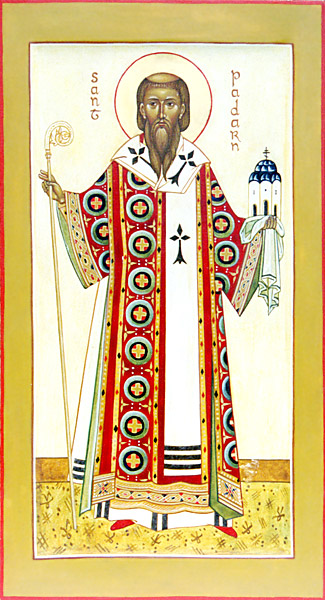 Saint Paternus of Wales (c 482 – c 568) was a Bishop, Monk, Hermit, and renowned Preacher. He built a Monastery of Llanbadarn Fawr in Wales. He died in c 568 of natural causes. He is also known as Padern. Soon after Paternus’ birth his pious father with his wife’s consent moved to Ireland to lead a solitary life in prayer. The mother raised Paternus in great piety.

When Paternus grew up he decided to follow in the steps of his father and, obtaining his mother’s permission and blessing, he set out to Wales together with a group of other young ascetics seeking the solitary life. In Wales the saint acquainted himself with his relative, St. Samson, with whom he became spiritual friends. 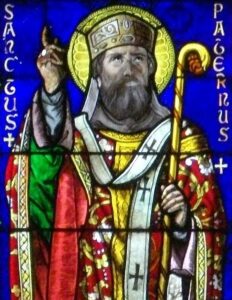 The ascetic met other prominent mentors of the Welsh Church of that period and always eagerly heeded their spiritual advice. Paternus was possibly trained for some time at the famous Llanilltud Fawr monastic school founded by St. Illtyd; at approximately the same time he established his first church on the seashore. St. Paternus started to withdraw for solitary prayer. But the saint was destined to lead the life of a hermit for only a short time.

Soon, together with other monks, Paternus with the blessing of spirit-bearing elders founded the great Monastery of Llanbadarn Fawr (“the Great Monastery of Padarn”) near to Aberystwyth in the former county of Cardiganshire, which is now Ceredigion. Some 120 monks lived in this monastery under St. Paternus. Paternus was most probably not only the Abbot of Llanbadarn but also a bishop at the same time.

Paternus was a bold opponent of the pagan kings of the region, never tiring of preaching in the hope of their conversion. King Maelgun accused the saint of stealing royal treasure and Paternus proved his innocence by plunging his hand into boiling water and taking it out completely unharmed. He was known for his preaching, charity and mortifications.

All-powerful and ever-living God, you called Saint Paternus to guide your people by his word and example. With him we pray to you to watch over the pastors of your Church, with the people entrusted to their care, and lead them to salvation.

We ask this through our Lord Jesus Christ, your Son, who lives and reigns with you and the Holy Spirit, one God, for ever and ever. Amen 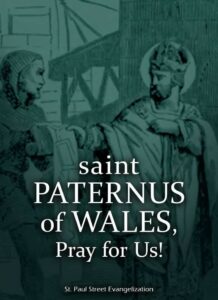 Saint Paternus of Wales, pray for us.