The energetic life of Peter Canisius, puts paid to the notion that saints lead dull lives. Peter lived his 76 years at a pace which must be considered heroic, even in our time of rapid change. Blessed with many talents, Peter was one of the most important figures in the Catholic Reformation in Germany, playing a role that parallels the earlier work of Boniface.

Peter Canisius was born in the Netherlands and graduated from the University of Cologne. When he was studying, he prayed at a Carthusian monastery and became acquainted with one of the very first Jesuits. Following a stage of discernment, he joined the Society of Jesus. He was ordained a priest in 1546 and just one year later participated in a session of the Council of Trent in the employ of a German bishop. Soon after this experience at the highest level of Church life, Peter was sent by Saint Ignatius of Loyola to teach at a minor Jesuit college, a test of Peter’s obedience. This ministry was short-lived, as Peter’s erudition and skills were destined to have a wider scope.

He became widely known for his editions of the writings of St. Cyril of Alexandria and St. Leo the Great. Besides this reflective literary bent, Peter had a zeal for the apostolate. He could often be found visiting the sick or imprisoned, even when his assigned duties in other areas were more than enough to keep most people fully occupied.

In 1547, Peter attended several sessions of the Council of Trent, whose decrees he was later assigned to implement. After a brief teaching assignment at the Jesuit college at Messina, Peter was entrusted with the mission to Germany—from that point on his life’s work. He taught in several universities and was instrumental in establishing many colleges and seminaries. He wrote a catechism that explained the Catholic faith in a way that common people could understand—a great need of that age.

Renowned as a popular preacher, Peter packed churches with those eager to hear his eloquent proclamation of the gospel. He had great diplomatic ability, often serving as a reconciler between disputing factions. In his letters—filling eight volumes—one finds words of wisdom and counsel to people in all walks of life. At times he wrote unprecedented letters of criticism to leaders of the Church—yet always in the context of a loving, sympathetic concern.

He wrote over eight thousand pages of letters to people of every rank of society. His refinements of his popular catechisms never ceased, and he worked for years with other scholars to compose a work on Church history to counter a popular Protestant history book which twisted the truth of Catholicism’s role in European history. Peter’s life was spent crisscrossing Central Europe in an era fraught with religious tension. The concussive force of the Protestant Reformation stunned the cerebellum of Central Europe for decades.

Shock, confusion, and violence spread outward from Germany in wave after confusing wave. Peter and many others slowly helped Germany, Switzerland, Austria, and Bohemia to recover their mental health and to remain true to their historic Catholic identity. Peter was in Vienna, where the people and princes wanted him to stay and be their bishop. But Saint Ignatius, his superior, said no, Peter’s skills were needed elsewhere. Then Peter was in Prague, starting Jesuit colleges, preaching to empty churches and, in the end, winning the day. Then Peter was in Bavaria, then Switzerland, and then Poland. His zeal, learning, and holiness were self-evident.

He held blameless the majority of Protestants, who were such out of ignorance or apathy. He reserved his rare invective only for the heresiarchs themselves, and for other intellectuals who should have known better. He distinguished between those who were willful apostates and those who were the victims of circumstances. Peter Canisius was a perpetual storm who rained down knowledge, apologetics, books, sermons, and letters over all of Central Europe.

He brought calm and moderation to a violent, fevered time. One biographer estimates Peter traveled twenty thousand miles on foot and horseback over a period of thirty years to further his apostolic labors. Peter Canisius was canonized and declared a Doctor of the Church on the same day in 1925.

Saint Peter Canisius composed question and answer German-language catechisms for every educational level. These catechisms were clear, scriptural, and of the purest doctrine. Hundreds of editions were printed during his own lifetime and for centuries afterwards.

Pope Benedict XVI, a German, said that in his father’s generation in the last half of the nineteenth century, a catechism in Germany was still known simply as “the Canisius.” This was three hundred years after Peter Canisius had died! If Saint Boniface was the Apostle of Germany in the eighth century, then Saint Peter Canisius was the Catechist of Germany in the sixteenth.

He died when he was 76. Canisius was beatified by Pope Pius IX in 1864, and later canonized and declared a Doctor of the Church on 21 May 1925 by Pope Pius XI. His feast day was included in the General Roman Calendar in 1926, for celebration on 27 April. In the liturgical reform of 1969, it was moved to 21 December, the anniversary of his death, the normal day for celebrating a saint’s entry into heaven. 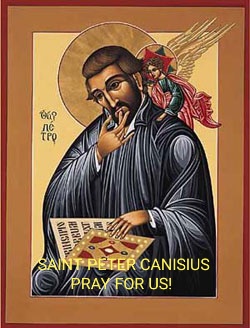 Saint Peter, God raised you up at the right time to save the faith in Central Europe. Your even temper, broad knowledge, life of prayer, and personal virtue brought lost sheep back into the fold. From heaven, help all priests, deacons, and teachers to do the same.

Your untiring efforts are an apt example for those involved in the renewal of the Church. Teachers, authors and journalists can see in your life a passion for the transmission of truth. Your life is exemplary, for Christians in an age of rapid change, when we are called to be in the world but not of the world. Intercede for us all to have faith and zeal such as yours. Amen