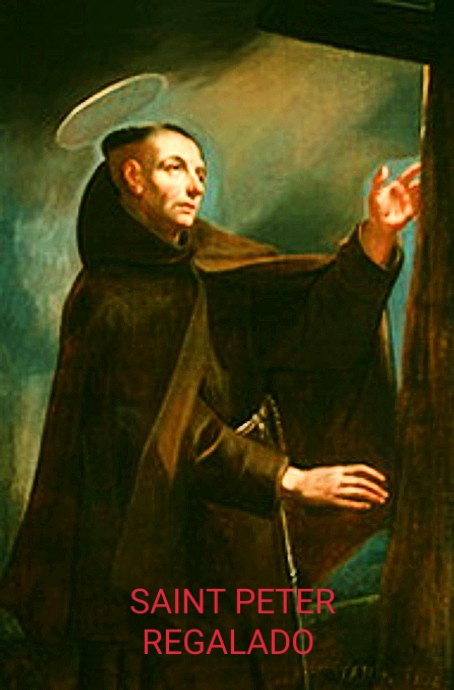 Peter de Regalado (Spanish: San Pedro Regalado; Latin Regalatus) (1390 – 30 March 1456) was a Franciscan (friar minor) and reformer. He was born at Valladolid, Spain. His parents were of noble birth and conspicuous for their wealth and virtue. Having lost his father in his early youth, he was piously educated by his mother, becoming her comfort. With joy and gratitude to God she recognized in her little son distinct signs of future holiness.

One could notice nothing childish in him. He loved places of retirement, where he would sit for hours in deepest devotion. Not only did the saintly child meditate upon the sufferings of Christ, but he wished also to have a share in them by inflicting pain on his tender body. At the age of ten years Peter begged to be admitted into the Conventual Franciscans, which favour was granted him three years later in the convent of his native town.

His prudent mother first tried his vocation for a long time, but after three years, when she could no longer doubt that the call came from God, she gave her consent despite his youthful age. Thirteen-year-old Peter was also granted admittance into the convent, a thing frequently done in those days. Although he was a child, he practiced all the austerities and virtues of a perfect religious.

In 1404, he became one of the first disciples of Pedro de Villacreces, who in 1397 had introduced into Spain the reform of the observance. In the newly founded convent at Aguilera, Peter found a life of solitude, prayer, and poverty. Peter attached himself to this reform of the observance of the rules with lively zeal. From Valladolid he traveled with his teacher and superior, Father Peter of Villagarcia, to the quiet little convent of Aguilar in the diocese of Osma, where he prepared himself for the priesthood by earnest study and more earnest prayer.

In 1415, he became superior of the convent at Aguilera and, on the death of Pedro de Villacreces (1422), the convent at Tribulos (del Abroyo). He effected many important reforms in the discipline of its Spanish monasteries. Peter observed nine Lents, fasting on bread and water, and was endowed with the gift of miracles and prophecy. After the death of Father Peter of Villagarcia in the year 1442, he was appointed head of all the convents of the movement in Spain. He was known for his charity.

Saint Peter Regalado kept continuous silence, devoting the greater part of the night to prayer. He celebrated the Mass with complete devotion and often was not able to refrain from tears. He scourged his body until he bled and slept on the bare floor or a little straw. For nine times in a year he kept a forty-day fast, mostly on bread and water, and observed religious poverty rigorously, suffering opposition and persecution.

His love of neighbor made him bring the poor and the sick with him into the convent. God rewarded his faithful service with most extraordinary graces. At prayer he was filled with seraphic ardor and was seen rising above the ground, with flames radiating from his body. On occasion there occurred a prodigy such as was once observed in the life of St Francis: the flames rose above the roof of the convent, though not damaging it.

The bishop of Osma, who one saw this prodigy himself, cried out:
“Truly, that is the abode of God.”
It seemed that the body of the holy man possessed the agility and ease which our glorified bodies will one day have, because he crossed over rivers as though they were solid ground. Often he was found at the same hour at convents far distant from one another, transacting business pertaining to his office.

God almighty announced the praises of His servant through the mouths of babes. On one occasion, Peter said to a babe in the arms of his mother: “May the Lord bless you, my dear child! Oh, what a beautiful and brilliant soul you have!” At this the babe turned to him and said to the amazement of its mother: “But still more beautiful is your soul, which God has adorned with so many graces.”

Soon, however, the great mass of the people was to praise him. Saint Peter Regalado died in the sixty-sixth year of his life, on March 31, 1456, and immediately the veneration of the people began. His grave was glorified by innumerable miracles. In 1492, the Catholic Queen Isabella requested to have several fingers taken from the saint as relics.

The saint’s body was found to be incorrupt when exhumed, and the amputation of the fingers caused blood to flow from the wounds for some time, as if the saint were still alive. His body was thereafter placed in a more precious tomb. He was beatified by Pope Innocent XI on 11 March 1684, and canonized by Pope Benedict XIV on 29 June 1746.

(Some excerpts are taken from the Franciscan Book of Saints)

God our Father, you gave your saints Peter Regalado a disposition of great patience. He was an effective leader of the friars because he did not become ensnared in anger over the sins of others. He helped sinning friars rearrange the priorities in their lives and dedicate themselves to living the gospel as they had vowed.

May we inculcate such a virtue of patient correction as an act of charity towards our suffering fellowmen, so as to make them turn in sincere devotions to you, in Jesus’ Name. Amen 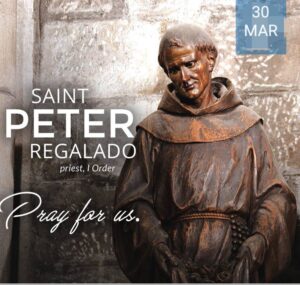 Saint Peter Regalado, pray for us.