On just two popes the title of ‘Great’ has been conferred, and today’s saint is one of them. Leo the Great’s origins are obscure, so nothing is known with certainty of his early life. He was ordained into Holy Orders and rose to prominence as a papal advisor in the 420s. He corresponded with imminent theologians and acted as a papal emissary before he was elected Bishop of Rome in 440. He expanded the power and influence of the papacy.

One of the most famous events in the papacy of Pope Leo I spanning the middle of the fifth century (440 – 461), was in 452, when Pope Leo had a rendezvous with Attila the Hun in Northern Italy, convincing him not to sack Rome. A legend says that Attila turned back because he saw Saints Peter and Paul standing behind Leo. Pope Leo governed the Church as the Western Roman Empire was slowly falling apart, alleviating poverty, protecting Rome from invaders, maintaining its Christian heritage.

Three years later, it fell again to Pope Leo to stand without human aid before a conquering army. Genseric, a Vandal king, appeared at the gates of Rome; and although the great Pope could not persuade him to spare the city, he nonetheless convinced him to spare the Archbasilica of St John Lateran, and the Basilicas of Sts Peter and Paul. The city was captured, but thousands of people were saved when they took refuge in the Christian edifices.

Leo’s pontificate was marked by a number of firsts: He was the first Pope named Leo, and the first Pope to be considered as the Great. He is also the first Pope whose sermons have come down to us, and  one of only two Popes (besides Gregory) to be recognised as a Doctor of the Church. When he died in 461, he became the first Pope buried in St Peter’s Basilica. His relics are preserved in the new St Peter’s, near the Altar of the Chair, in a chapel dedicated to the “Madonna of the Column.”

Both as theologian and pastor, he was attentive to the importance of communion between the churches, yet never forgetting the needs of the faithful. It was his care and concern for ordinary women and men that animated the works of charity he accomplished in an era marked by famine, poverty, injustice, and pagan superstition. He always strove to uphold justice with constancy, and to offer clemency with love, all in the name of Jesus, since without Christ we can do nothing, but with Him, we can do all.

The Church’s earliest theological tradition rooted Rome’s primacy in the double martyrdom of Saints Peter and Paul in the eternal city. No other city could claim to have been sanctified by the blood of two martyrs. Pope Leo, however, emphasized what was to become a more dominant argument for papal supremacy—that the pope’s authority is not rooted merely on the historical fact that Peter and Paul died on roman ground but on the theological fact that the Bishop of Rome occupies the Chair of Saint Peter.

Pope Leo repeatedly taught that the pope’s power was unequaled and that the pope was the head of all the world’s bishops, that every bishop could have direct recourse to the pope, and not just to the local archbishop, in disputed matters. He consolidated church governance and authority under a Roman papacy. In important theological, moral, or legal matters that affected the entire church, every bishop sought advice at Rome. Pope Leo enacted an aggressive papal role, directly enforcing discipline over bishops, and settling disputes. The Catholic Church needed a strong center of gravity to ensure a universal church rather than independent national churches, united in name only.

While outstanding as an effective and practical leader, Pope Leo is most known for the concision, depth, and clarity of his sermons and letters, for which he was declared a Doctor of the Church in 1754. He was the first pope, after Saint Peter himself, buried in Saint Peter’s Basilica. His remains lie under a beautiful marble relief sculpture of his famous meeting with Attila. Pope Benedict XVI said that Leo’s papacy “was undoubtedly one of the most important in the Church’s history.”

Pope Saint Leo the Great, give to the Pope and all bishops pastoral hearts, sharp minds, and courageous wills, so that they may lead the Church by personal example, by correct teaching, and by their caring little for worldly criticism.

Pray that the members of the one Universal and Apostolic Church remain united even in the face of dissent in individual matters and that the many denominations formed by breaking away from the United Body of Christ’s Church become reconciled in the Name of Jesus our Lord. Amen 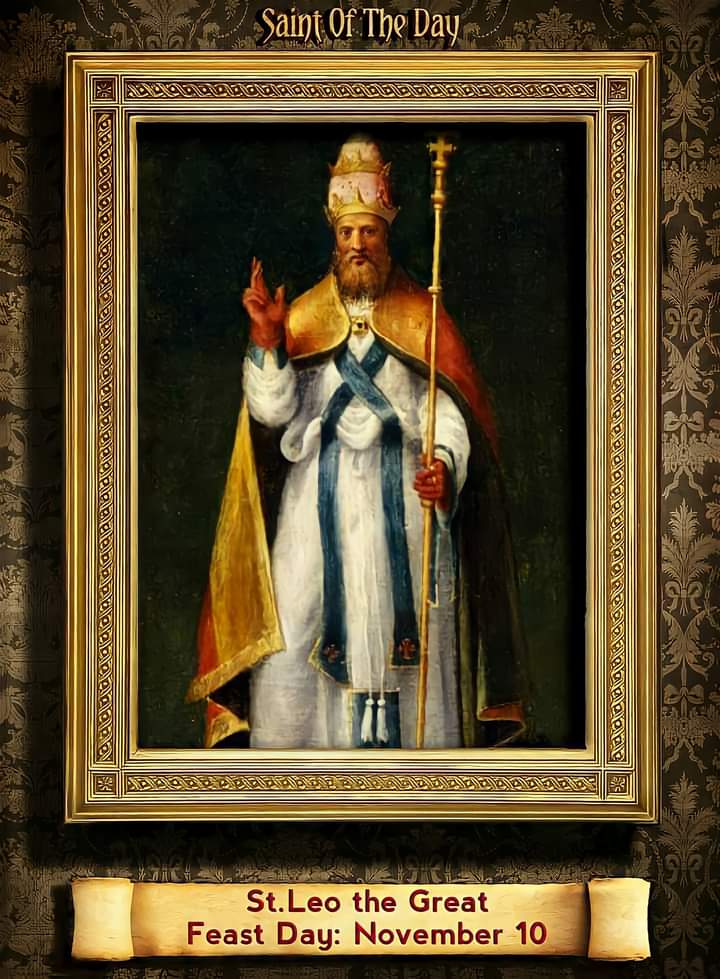