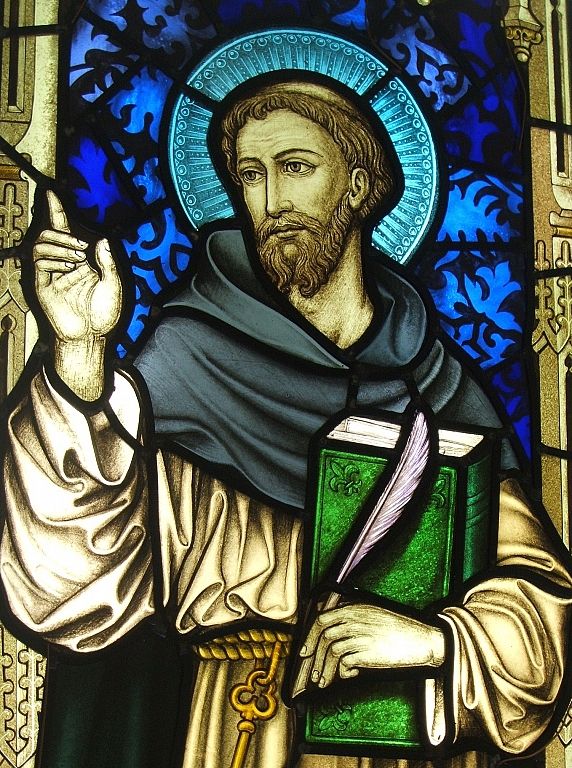 Raymond of Penyafort was born in Vilafranca del Penedès, a small town near Barcelona, Principality of Catalonia, around 1175. Descended from a noble family with ties to the royal house of Aragon, he was educated in Barcelona and at the University of Bologna, where he received doctorates in both civil and canon law. From 1195 to 1210, he taught canon law. In 1210, he moved to Bologna, where he remained until 1222, including three years occupying the Chair of canon law at the university.

He came to know the newly founded Dominican Order there in Bologna. Raymond was attracted to it by the preaching of the Prior, Blessed Reginald , and received the habit at the age of 47, in the Dominican Convent of Barcelona. He was instrumental in the founding of the Mercedarian friars. When approached by Peter Nolasco, Raymond encouraged and assisted him in obtaining the consent of King James I of Aragon for the foundation of the Order.

The need to study oriental languages was affirmed by the General Chapter of the Dominican Order in Paris in 1236. Raymond established the first school of the Studia Linguarum in Tunis, where it was known as the Studium arabicum. The objective of the schools was to help the Dominicans liberate Christian captives in Islamic lands. More than simply a list of sins and suggested penances, it discussed pertinent doctrines and laws of the Church that pertained to the problem or case brought to the confessor.

In 1229 Raymond was appointed theologian and penitentiary to the Cardinal Archbishop of Sabina, John of Abbeville, and was summoned to Rome in 1230 by Pope Gregory IX, who appointed him chaplain and grand penitentiary. Knowing Raymond’s reputation in the juridical sciences, Gregory IX asked him to help in the rearranging and codifying of canon law. Canon laws, which were previously found scattered in many publications, were to be organized into one set of documents.

Papal decretal letters had been changing the law over the course of the previous 100 years since the publication of the Decretum of Gratian. Being pleased with Raymond’s efforts, the pope announced the new publication in a Bull directed to the doctors and students of Paris and Bologna in September 1234, commanding that the work of Raymond alone should be considered authoritative, and should alone be used in the schools. His collection of canon law, known as the Decretals of Gregory IX, became a standard for almost 700 years. Canon law was finally fully codified by 1917.

Raymond served as the confessor for King James I of Aragon. While on the island of Majorca to initiate a campaign to help convert the Moors living there, the king brought his mistress with him. Raymond reproved the king and asked him repeatedly to dismiss his concubine. The king refused to do so. Finally, the saint told the king that he could remain with him no longer and made plans to leave for Barcelona. But the king forbade Raymond to leave the island, and threatened punishment to any ship captain who dared to take him.

Raymond and his Dominican companion went down to the seashore where Raymond took off his cappa (the long black cloak worn by Dominicans over the white tunic and scapular), and spread one end of it on the water while rigging the other end to his walking staff. Having thus formed a miniature mast, Raymond bid the other Dominican to hop on, but his companion, lacking the saint’s faith, refused to do so. Then Raymond bid him farewell, and with the sign of the cross he pushed away from the shore and sailed away on his cloak.

Skirting around the very boats that had forbidden him passage, the saint was seen by scores of sailors who shouted in astonishment and urged him on. Raymond sailed the 160 miles to Barcelona in the space of six hours, where his landing was witnessed by a crowd of amazed spectators. In awe of this miracle, King James I mended his ways. Having reached his 60th year, Raymond retired to a reclusive life in Barcelona. Within the year, however, Raymond was appointed to the position of Archbishop of Tarragona, the ecclesiastical capital of the Principality of Catalonia and the Crown of Aragon, but declined.

Raymond returned to Barcelona in 1236. Not long able to remain in seclusion, however, he was elected the Master of the Order of Preachers by the General Chapter of 1238. He immediately set out on foot to visit all the houses of friars and nuns of the Order. Even in the midst of this, he was able to draft a new set of Constitutions of the Order, in which he included a resignation clause for the Master. When it was adopted by the next General Chapter of 1240, he immediately took advantage of that option and resigned within two years.

Although not an inquisitor, as an advisor to James I of Aragon he was often consulted regarding questions of law regarding the practices of the Inquisition in the king’s domains. His deep sense of justice and equity, combined with the worthy Dominican’s sense of compassion, allowed him to steer clear of the excesses that were found elsewhere in the formative years of the inquisitions into heresy. Raymond approved of conjugal visits for those imprisoned so that the spouse should not be exposed to the risk of possible adultery.

Rejoicing to see himself again free of office, he applied himself with fresh vigor to the Christian ministry, especially working for the conversion of the Moors. To this end he encouraged Thomas Aquinas to write his work Against the Gentiles. He instituted the teaching of Arabic and Hebrew in several houses of the friars. He also founded priories in Murcia (then still ruled by Arabs) and in Tunis. Additionally he went to help establish the Church in the recently conquered island of Mallorca. He had great influence over the King of Aragon.

Raymond died at the age of 100 in Barcelona in 1275 and was canonized by Pope Clement VIII in 1601. He was buried in the Cathedral of Santa Eulalia in Barcelona. St. Raymond of Peñafort’s feast day was inserted in the General Roman Calendar in 1671 for celebration on 23 January. In 1969 it was moved to 7 January, the day after that of his death. He is patron saint of canon lawyers, and lawyers, in general.

O God, who blessed the Priest Saint Raymond with the virtue of deep mercy and compassion for sinners and captives, grant us, through his intercession, that, rescued and free from slavery to sin, we may dedicate our lives in freedom of spirit, carryingout what is favorable to you.

This special grace we plead, in the Name of our Lord Jesus Christ, your Son, Who lives and reigns with you in the unity of the Holy Spirit, one God, for ever and ever. Amen 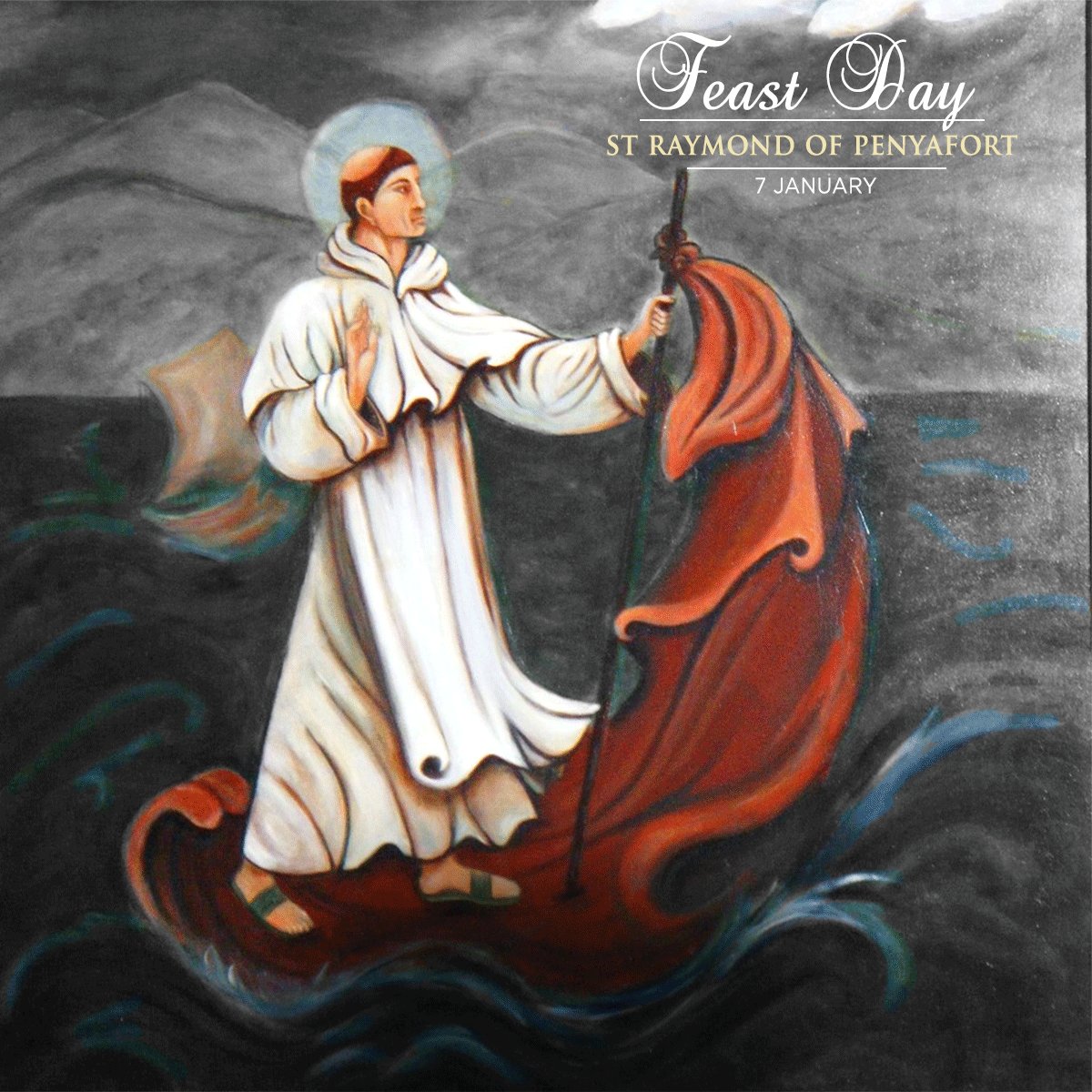 Saint Raymond of Penyafort, pray for us.