FEAST OF SAINT RITA OF CASCIA – 22nd MAY 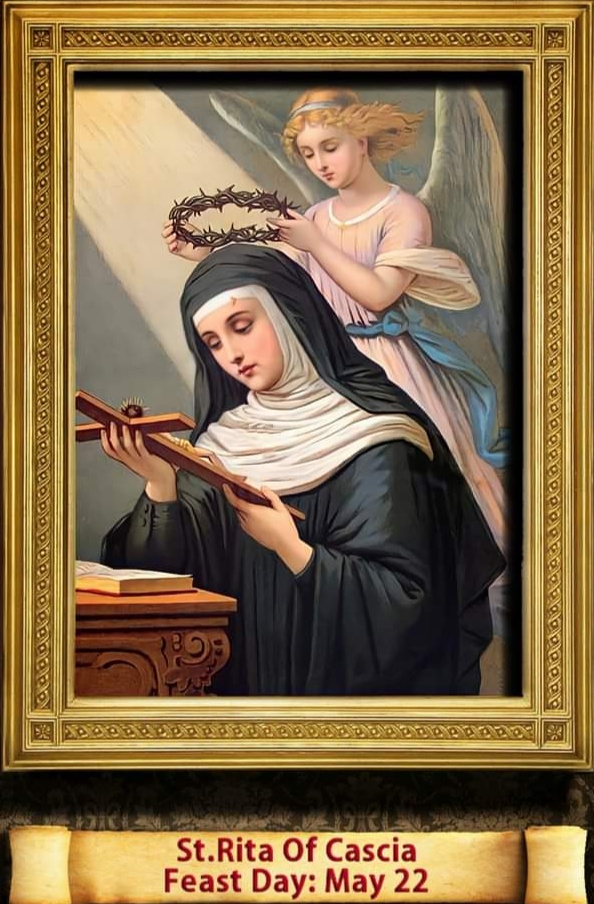 FEAST OF SAINT RITA OF CASCIA
FEAST DAY – 22nd MAY

Rita of Cascia, born Margherita Lotti (1381 – 22 May 1457), was an Italian widow and Augustinian nun venerated as a saint in the Roman Catholic Church. As Rita was growing up, her parents supported her desire to live a life of prayer and set up an oratory in their home. They were reluctant when at age 12, Rita decided to dedicate herself to God. They won out and gave her in marriage at age 18.

Margherita Lotti was born in 1381 in the city of Roccaporena a small suburb of Cascia (near Spoleto, Umbria, Italy), where various sites connected with her are the focus of pilgrimages. Her name, Margherita, means “pearl”. She was affectionately called Rita, the short form of her baptismal name.

Her parents, Antonio and Amata Ferri Lotti, were known to be noble, charitable persons, who gained the epithet Conciliatore di Cristo (Peacemakers of Christ). According to pious accounts, Rita was originally pursued by a notary named Gubbio but she resisted his offer. She was married at age twelve to a nobleman named Paolo Mancini. 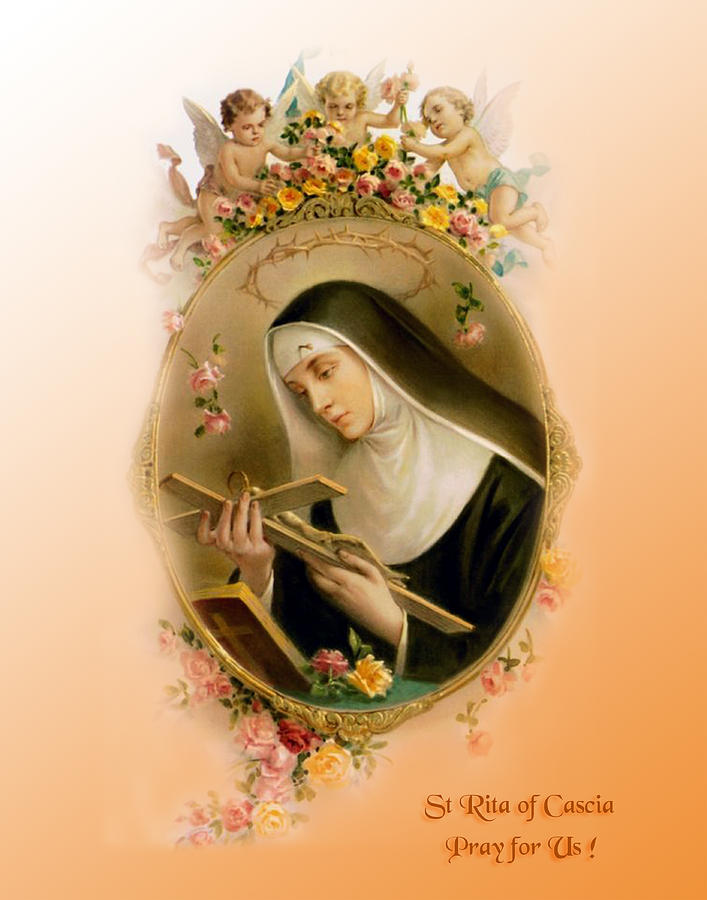 Her parents arranged her marriage, a common practice at the time, despite her repeated requests to be allowed to enter a convent of religious sisters. Her husband, Paolo Mancini, was known to be a rich, quick-tempered, immoral man, who had many enemies in the region of Cascia. The marriage lasted for eighteen years, during which she is remembered for her Christian values as a model wife and mother who made efforts to convert her husband from his abusive behavior.

After 18 years of marriage and 2 sons, Rita lost her husband and shortly after, her 2 sons. One night as Rita was praying, she heard her name called out and was transported to another place. This miracle astonished the Augustinian Nuns who received Rita, and soon enrolled her among their number.

She joined the Augustinian community of religious sisters, where she was known both for practicing mortification of the flesh and for the efficacy of her prayers. Various miracles are attributed to her intercession, and she is often portrayed with a bleeding wound on her forehead, which is understood to indicate a partial stigmata. 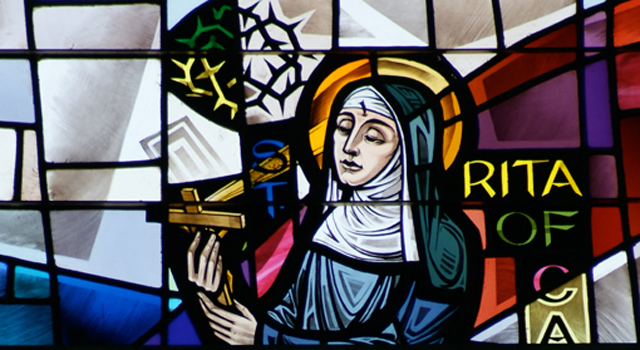 Rita had endured her husband’s insults, physical abuse and infidelities for many years. According to popular tales, through humility, kindness and patience, Rita was able to convert her husband into a better person, more specifically renouncing a family feud known at the time as La Vendetta. Rita eventually bore two sons, Giangiacomo (Giovanni) Antonio and Paulo Maria, and brought them up in the Christian faith.

As time went by and the family feud between the Chiqui and Mancini families became more intense, Paolo Mancini became congenial, but his allies betrayed him and he was violently stabbed to death by Guido Chiqui, a member of the feuding family.
Rita gave a public pardon at Paolo’s funeral to her husband’s murderers.

Paolo Mancini’s brother, Bernardo, was said to have continued the feud and hoped to convince Rita’s sons to seek revenge. Bernardo convinced Rita’s sons to leave their manor and live at the Mancini villa ancestral home. As her sons grew, their characters began to change as Bernardo became their tutor. 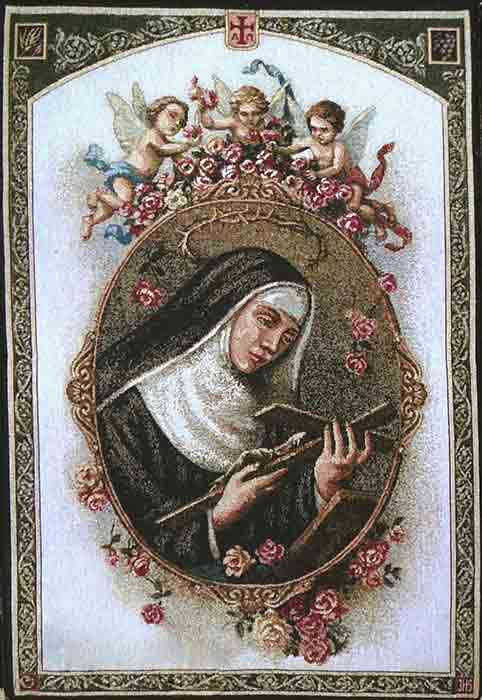 Rita’s sons wished to avenge their father’s murder. Rita, fearing that her sons would lose their souls, tried to dissuade them from retaliating, but to no avail. She asked God to remove her sons from the cycle of vendettas and prevent mortal sin and murder. Her sons died of dysentery a year later, which pious Catholics believe was God’s answer to her prayer, taking them by natural death rather than risk them committing a mortal sin punishable by Hell.

After the deaths of her husband and sons, Rita desired to enter the monastery of Saint Mary Magdalene in Cascia but was turned away. Although the convent acknowledged Rita’s good character and piety, the nuns were afraid of being associated with her due to the scandal of her husband’s violent death and because she was not a virgin.

However, she persisted in her cause and was given a condition before the convent could accept her: the task of reconciling her family with her husband’s murderers. She implored her three patron saints (John the Baptist, Augustine of Hippo, and Nicholas of Tolentino) to assist her, and she set about the task of establishing peace between the hostile parties of Cascia. 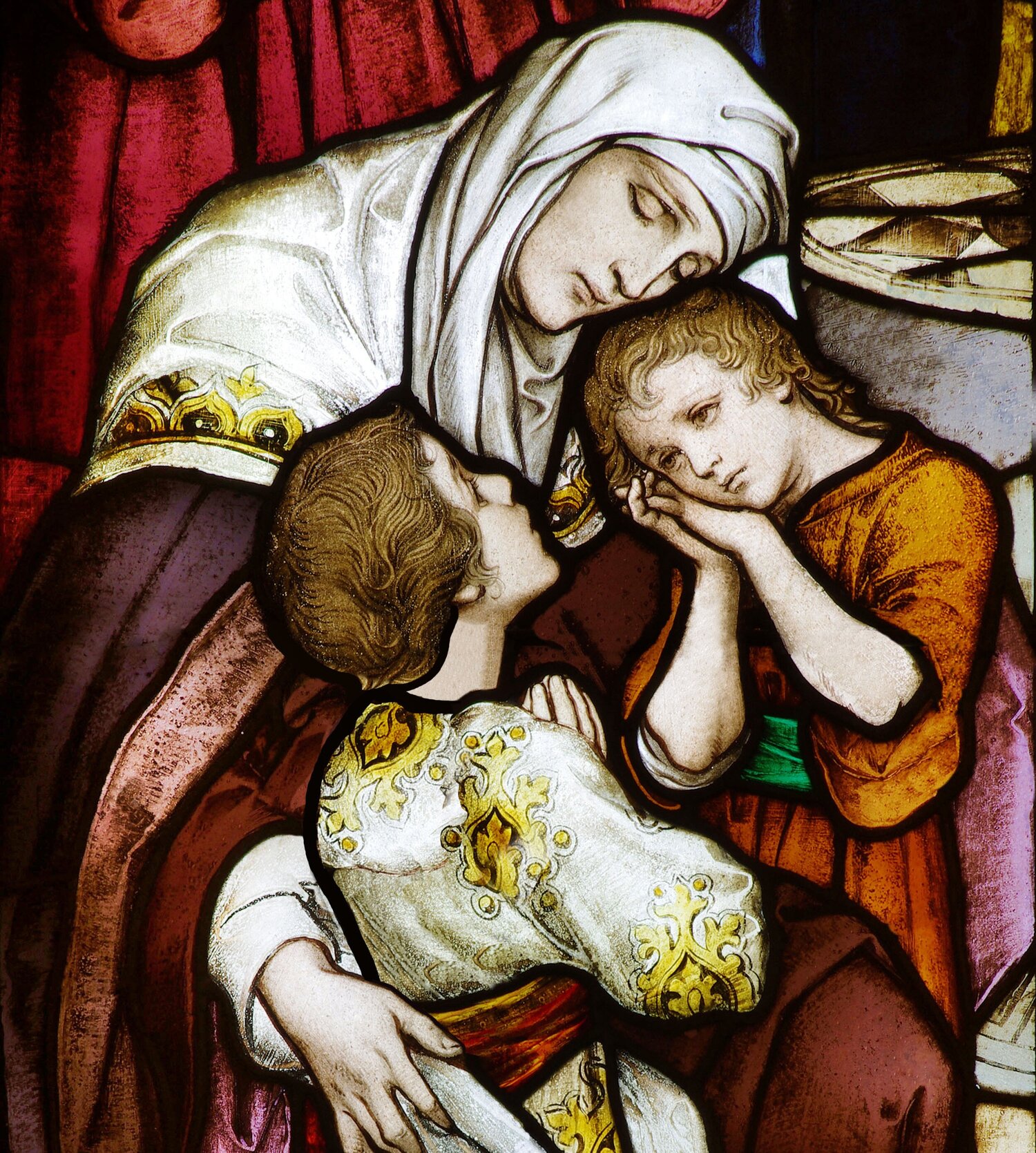 Popular religious tales recall that the bubonic plague, which ravaged Italy at the time, infected Bernardo Mancini, causing him to relinquish his desire to feud any longer with the Chiqui family. She was able to resolve the conflicts between the families and, at the age of thirty-six, was allowed to enter the monastery.

Pious Catholic legends later recount that Rita was transported into the monastery of Saint Magdalene via levitation at night into the garden courtyard by her three patron saints. She remained at the monastery, living by the Augustinian Rule, until her death from tuberculosis on 22 May 1457. The Augustinian Father Agostino Cavallucci from wrote the first biography of Rita based on oral tradition.

The Vita was published in 1610 by Matteo Florimi in Siena. The work was composed long before her beatification, but the title page nevertheless refers to Rita as already ‘blessed’. Another “Acta” or life story of the woman was compiled by the Augustinian priest Jacob Carelicci. Rita was beatified by Pope Urban VIII in 1626. The pope’s private secretary, Fausto Poli, had been born some fifteen kilometers (nine miles) from her birthplace and much of the impetus behind her cult is due to his enthusiasm. Rita was also mentioned in a French volume on important Augustinians by Simplicien Saint-Martin. She was canonized on 24 May, 1900 by Pope Leo XIII.

Her feast day is 22 May. On the 100th anniversary of her canonization in 2000, Pope John Paul II noted her remarkable qualities as a Christian woman: “Rita interpreted well the ‘feminine genius’ by living it intensely in both physical and spiritual motherhood.” Pope Leo XIII canonized Rita on 24 May 1900. Her feast day is celebrated on 22 May.

At her canonization ceremony, she was bestowed the title of Patroness of Impossible Causes, while in many Catholic countries, Rita came to be known as the patroness of abused wives and heartbroken women. Her incorrupt body remains in the Basilica of Santa Rita da Cascia. 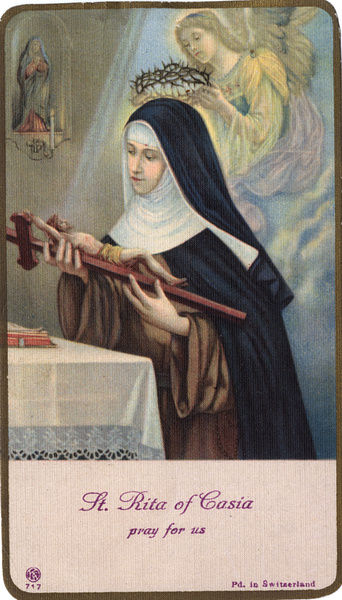 SAINT RITA OF CASCIA Italian peasant woman who survived a brutal husband to become a nun and saint Date: 1377 – 1447

Rita has acquired the reputation, together with St. Jude, as a saint of impossible causes. She is also the patron saint of sterility, abuse victims, loneliness, marriage difficulties, parenthood, widows, the sick, bodily ills, and wounds.

Rita’s body, which has remained incorrupt over the centuries, is venerated today in the shrine at Cascia, which bears her name. Many people visit her tomb each year from all over the world. French painter Yves Klein had been dedicated to her as an infant. In 1961, he created a Shrine of St. Rita, which is in Cascia Convent. 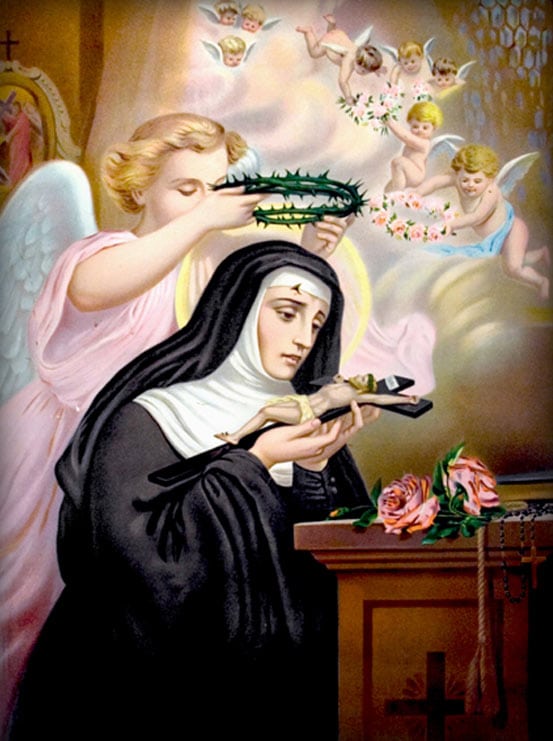 Heavenly Father, Who in your infinite goodness has regarded the prayer of your servant, Saint Rita, and have granted her supplications in reward of her compassionate love and firm reliance on your promises, have pity on our adversity and succor us in our times of need, so that we may obtain the piety of Saint Rita and edify the faith by our conduct, in Jesus’ Name. Amen 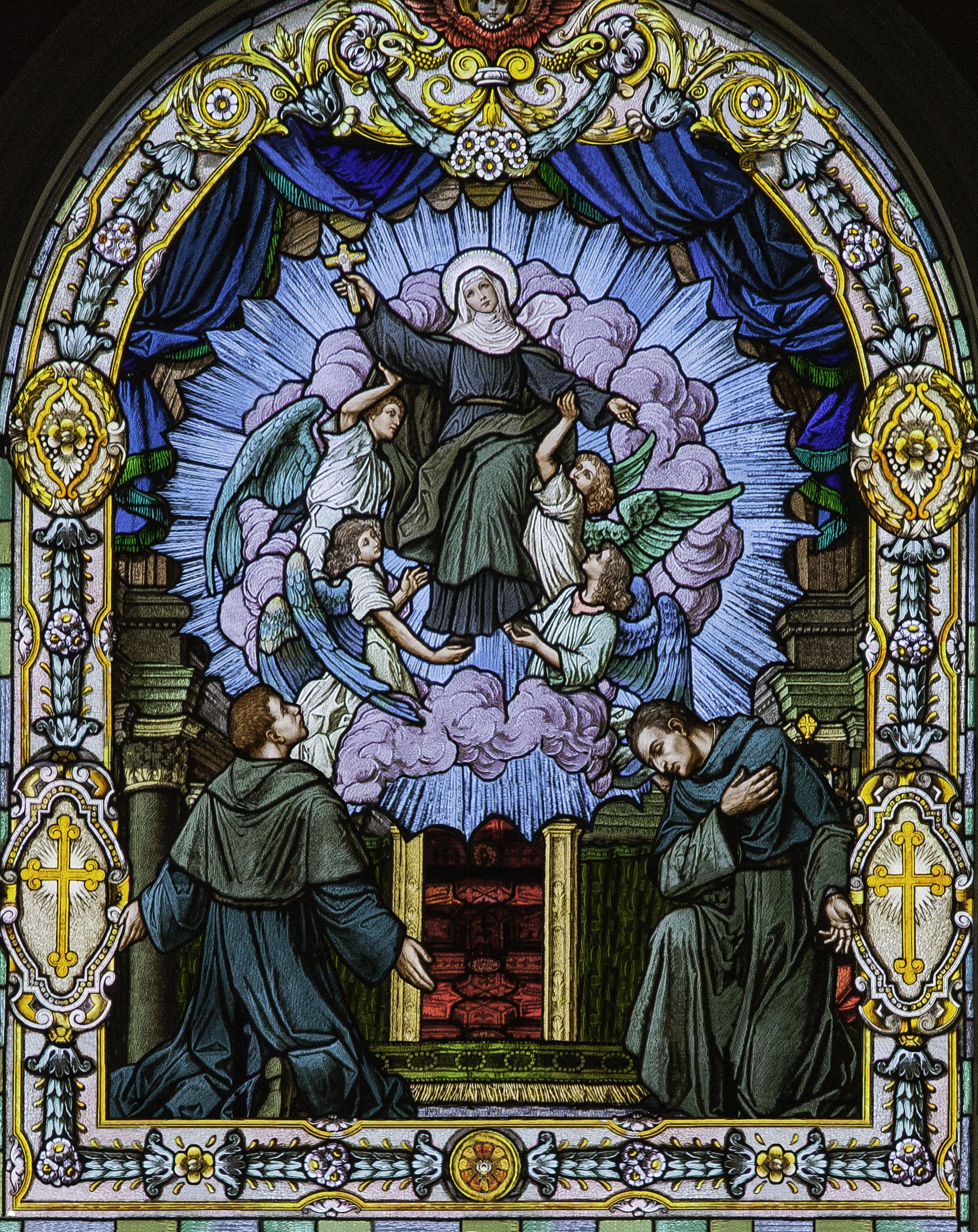 O Glorious St. Rita, who miraculously participated in the sorrowful Passion of our Lord Jesus Christ, obtain for us the similar grace to suffer with resignation the troubles of this life, and protect us in all our needs. Amen 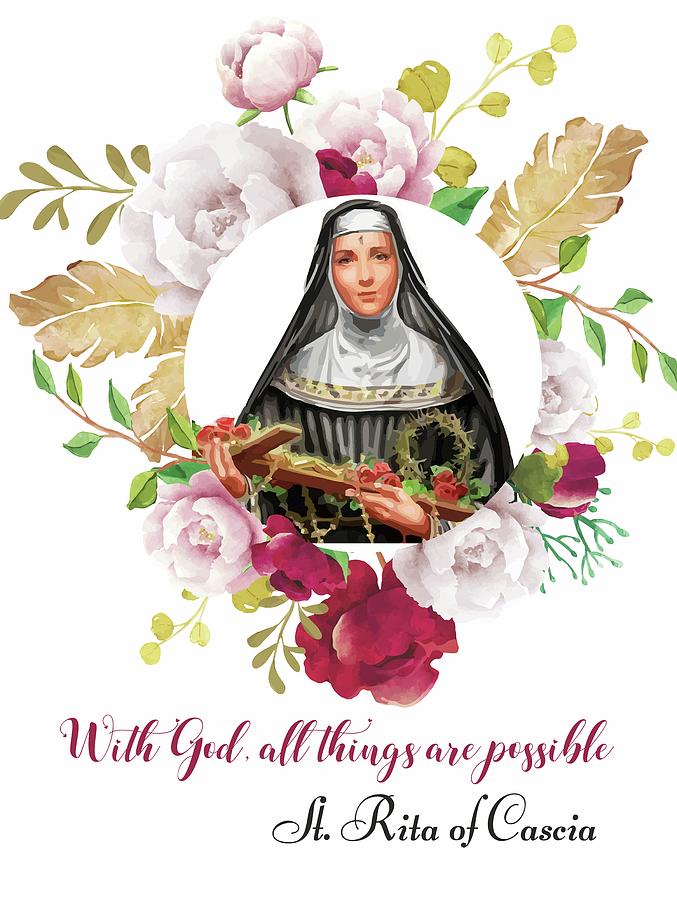