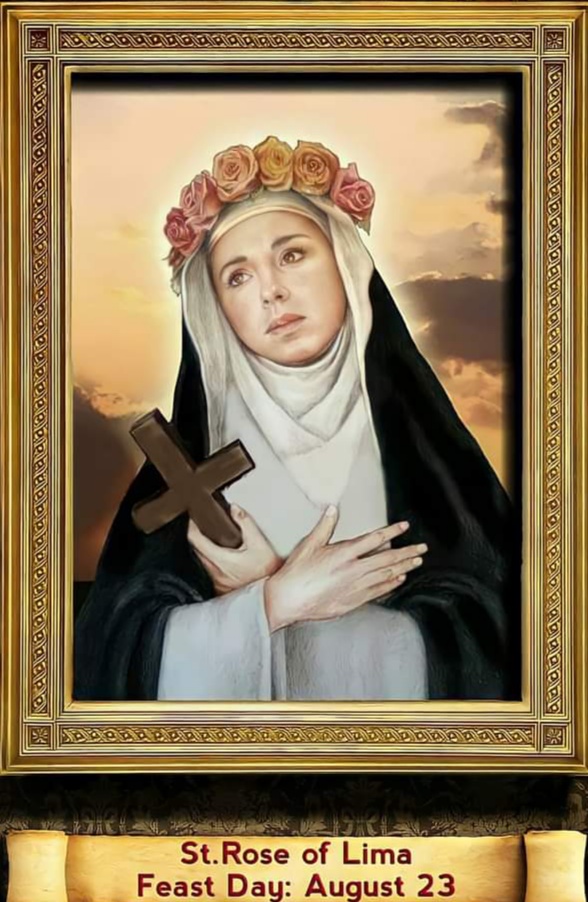 Rose of Lima (born Isabel Flores de Oliva; 20 April 1586 – 24 August 1617) was a member of the Third Order of Saint Dominic in Lima, Peru, who became known for both her life of severe penance and her care of the poverty stricken of the city through her own private efforts. Rose of Lima was born to a noble family and is the patron saint of embroidery, gardening and cultivation of blooming flowers.

She was one of ten siblings. She was baptized on the day of her birth, with her aunt, Isabel de Herrara, acting as her godmother. The baby was named after her aunt, Isabel. Because the child was so beautiful, she was nicknamed Rosa or Rose. While Rose was still a child, her father Gaspar, caught up in the Spanish quest for self enrichment through mining projects, lost the family’s fortune in successively failed mining ventures in the Andes Mountains.

Consequently, her wealthy family fell on hard times and Rose was raised in poverty. Since the age of five, she had to lend a helping hand to procure some of her family’s income. She excelled in needlework or embroidery, working up to ten hours a day. The selling of her artifacts proved to be a good augmentation of her family’s humble income.

A lay member of the Dominican Order, she was declared a saint by the Catholic Church, being the first person born in the Americas to be canonized as such. As a saint, Rose of Lima has been designated as a co-patroness of the Philippines along with Pudentiana; both saints were moved to second-class patronage in September 1942 by Pope Pius XII, but Rose remains the primary patroness of Peru and of the local people of Latin America.

Her image is featured on the highest denomination banknote of Peru. She was born as Isabel Flores de Oliva in the city of Lima, then in the Viceroyalty of Peru, on 20 April 1586. She was one of the many children of Gaspar Flores, a harquebusier in the Imperial Spanish army, born in Puerto Rico, and his wife, María de Oliva y Herrera, a criolla native of Lima. Her later nickname “Rose” comes from an incident in her infancy: a servant claimed to have seen her face transform into a rose. 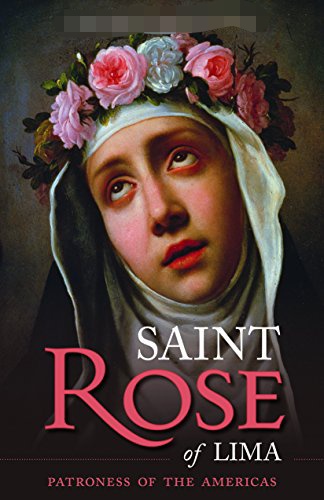 In 1597 Isabel was confirmed by the Archbishop of Lima, Toribio de Mogrovejo, who was also to be declared a saint. She formally took the name of Rose (Rosa in Spanish) at that time. As a young girl, in emulation of the noted Dominican tertiary Catherine of Siena, she began to fast three times a week and performed severe penances in secret.

Rose had two canonized saints who played an important role in her spiritual journey. The first one was St. Turibius de Mongrovejo, the archbishop of Lima. This saint, born in Spain, was the Bishop of Lima for some eight years when Rose was born. He burned with apostolic zeal. He promoted religious and social reform throughout Peru, devoting much of his time to defend and help the native Indian population.

St. Turibius was the bishop who confirmed our saint, giving her the confirmation name of Rose. The second saint in the life of St. Rose was a fellow countryman and Dominican brother, St. Martin de Porres. Like his friend Rose, Martin had a profound devotion to the Holy Eucharist and the caring for the sick.

When Rose, who was extremely beautiful, was admired for her beauty, she cut off her hair and rubbed pepper on her face, upset that men were beginning to take notice of her. She rejected all suitors against the objections of her friends and her family. Despite the censure of her parents, she spent many hours contemplating the Blessed Sacrament, which she received daily, an extremely rare practice in that period.

She was determined to take a vow of virginity, which was opposed by her parents who wished her to marry. Finally, out of frustration, her father gave her a room to herself in the family home. After daily fasting, she took to permanently abstaining from eating meat. She helped the sick and hungry around her community, bringing them to her room and taking care of them. 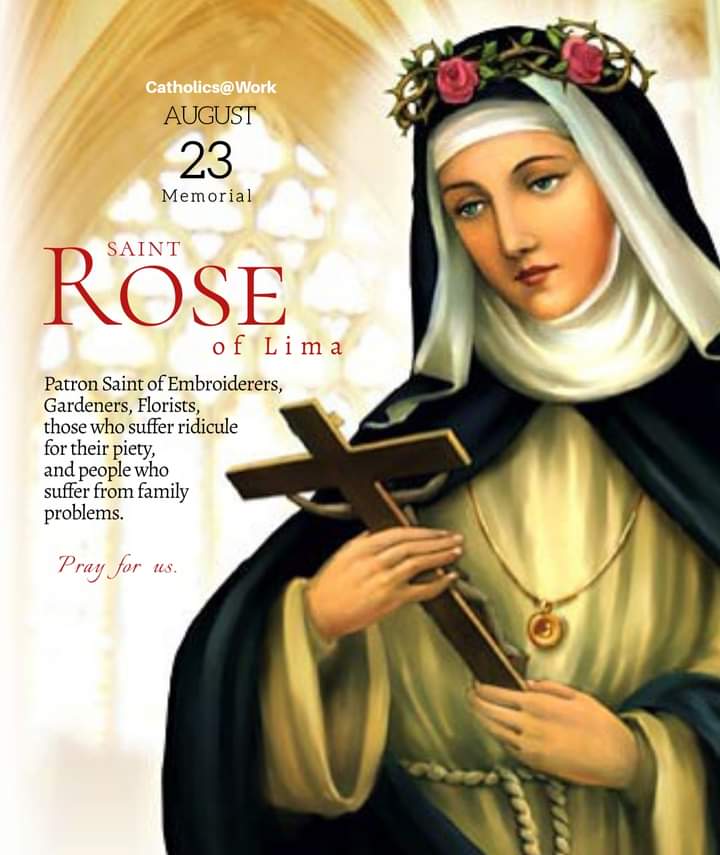 Rose sold her fine needlework, and took flowers that she grew to market, to help her family. She made and sold lace and embroidery to care for the poor, and she prayed and did penance in a little grotto that she had built. Otherwise, she became a recluse, leaving her room only for her visits to church. She attracted the attention of the friars of the Dominican Order. She wanted to become a nun, but her father forbade it, so she instead entered the Third Order of St. Dominic while living in her parents’ home.

In her twentieth year she donned the habit of a tertiary and took a vow of perpetual virginity. She only allowed herself to sleep two hours a night at most, so that she had more hours to devote to prayer. She donned a heavy crown made of silver, with small spikes on the inside, in emulation of the Crown of Thorns worn by Christ.

She occasionally visited hospitals to nurse the sick and the poor. Those who met her were deeply impressed by the love for God that radiated from her. Her corporal works of mercy were the seeds of social work in Peru. Rose also spent many hours in prayer before the Blessed Sacrament and received daily Holy Communion, something that would be unheard of for centuries.

Rose spent the last few years of her very short life in the home of a Spanish government official, Don Gonzalo de Massa. During these years she would bring to her room homeless children, the elderly and the sick to look after them. Although living as a guest at the official’s home, Rose did not hesitate to protest against some of the harsh practices of the Spanish overlords, alleging that the sufferings of the poor were caused by the conquerors’ greed.

For eleven years she lived this way, with intervals of ecstasy, and eventually died on 24 August 1617, at the young age of 31. It is said that she prophesied the date of her death. During her last illness, she was frequently heard praying: “Lord, increase my sufferings, and with them increase your love in my heart.” Her funeral was held in the cathedral, attended by all the public authorities of Lima. 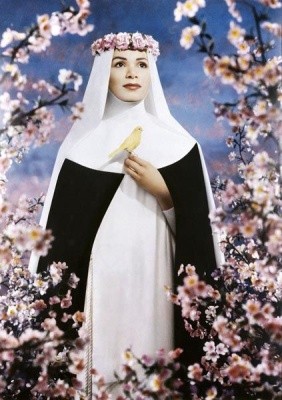 Her feast day is on the 23rd day of August (the 30th day of August in the Traditional calendar). At her funeral, the Spanish officials, whom she had criticized for the injustices they had imposed on the native Indian people, struggled among themselves to be privileged in carrying her coffin.

Rose was beatified by Pope Clement IX on 10 May 1667, and canonized on 12 April 1671, by Pope Clement X, and was the first Catholic in the Americas to be declared a saint. Her shrine, alongside those of her friends Martin de Porres and John Macias, is currently located inside of the convent of Saint Dominic in Lima. The Catholic Church says that many miracles followed her death.

There were stories that she had cured a leper, and that, at the time of her death, the city of Lima smelled like roses; roses also started falling from the sky. Many places in the New World are named Santa Rosa after her. Historians remember St. Rose of Lima for her piety and chastity. St. Rose is the patroness of embroiderers, gardeners, florists, those who suffer ridicule for their piety, and people who suffer family problems. 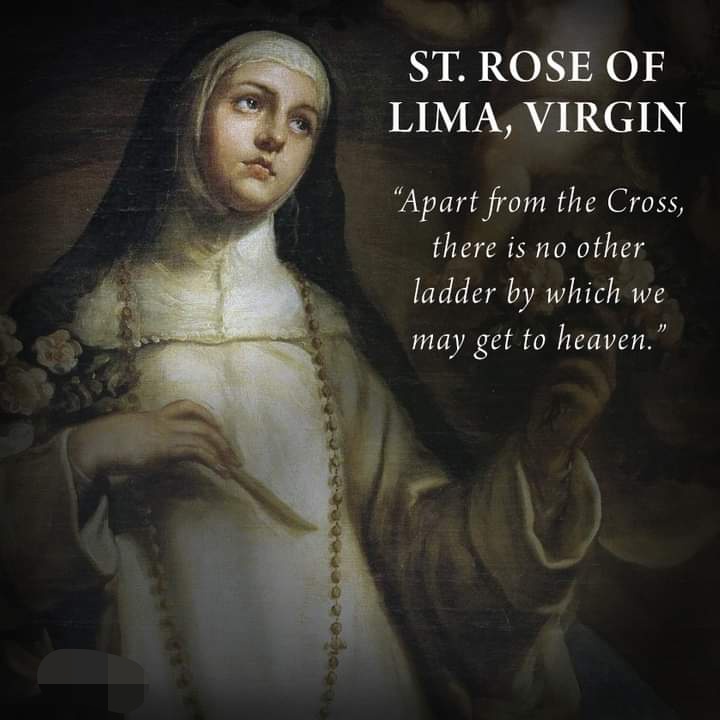 God our Father, you embellished the heart of St Rose with zealous and missionary charity and the evangelistic desire to spread your glory among all peoples. Secluded from the world in the austerity of a life of penance, she might gave herself to you alone. Her works of charity sustained many.

We remember her today, with the same desire, to extend your kingdom to the very ends of the earth. We ask this through our Lord Jesus Christ, your Son,
who lives and reigns with you and the Holy Spirit, one God forever and ever. Amen 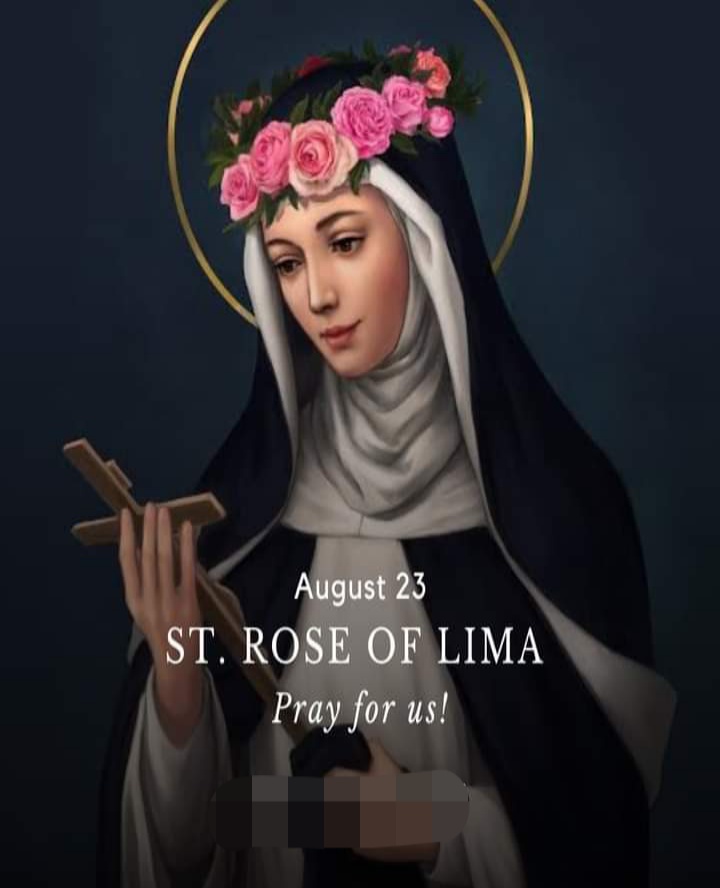 Saint Rose of Lima, pray for us.