FEAST OF SAINT TERESA OF THE ANDES – 12th APRIL 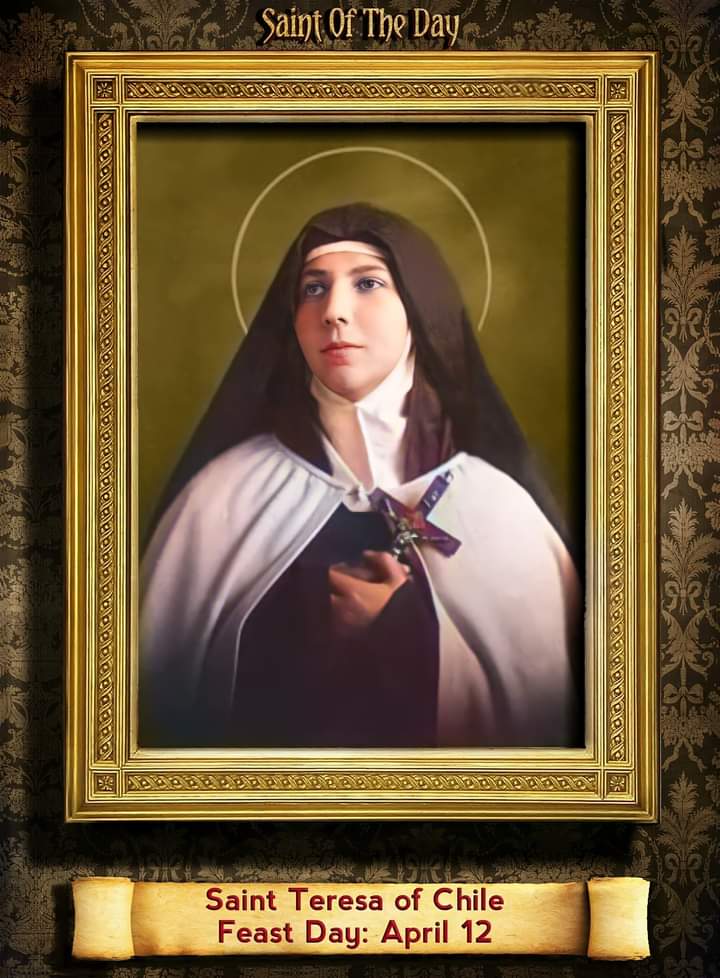 Teresa of Jesus of Los Andes (13 July 1900 – 12 April 1920), born as Juana Enriqueta Josephina de Los Sagrados Corazones Fernández Solar, was a Chilean professed religious from the Discalced Carmelites. Fernández Solar was a pious child but had an often unpredictable temperament for she could be prone to anger and being vain but could also demonstrate her charitable and loving nature.

In other ways, she was a normal teenager, who battled with her pride over her prettiness, had crushes on the local boys, and enjoyed dating. She felt that marriage would not have separated her from God, but her spiritual sense was so strong that she eventually decided that she wanted to serve God completely by becoming a nun.

She seemed transformed when she decided to become a nun and her character seemed to change, for her sole ambition was to dedicate herself to the service of God. But her time in the convent was cut short due to her contracting an aggressive disease that killed her. She knew she would die but was consoled knowing she could make her profession before she died. 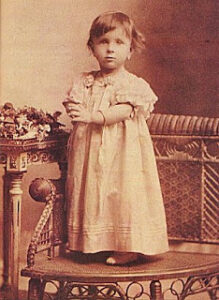 Born in Santiago in Chile to the upper class Miguel Fernández and Lucia Solar, she was the fourth of six children; three males and two females not including herself. Her brothers were Luis and Miguel and Ignacio and her sisters were Lucía and Rebeca (d. 31 December 1942). Rebeca became a Discalced Carmelite nun at the same convent as Juana as “Teresa of the Divine Heart”.

Fernández Solar received her education in a college managed by French nuns from the Sacred Heart order, and she remained there from 1907 until 1918. In 1914, she decided to consecrate herself to the Lord and become a Discalced Carmelite. On 8 December 1915, she made a vow to remain chaste and she renewed it on a regular basis. Fernández Solar was pious in character, but could also be stubborn and vain. She also lost her temper on some occasions.

On one particular occasion, her sister Rebeca grew so fed up with Juana that she hit her, while the red-faced Juana grabbed her with anger but stopped and kissed her cheek. Rebeca was confused and unsure but chased her off and said: “Get out of here! You have given me the kiss of Judas!” Juana was hospitalized in 1913 for acute appendicitis. In her childhood, she also liked singing and dancing and played croquet and tennis. She was an able swimmer and could play the piano and harmonium. 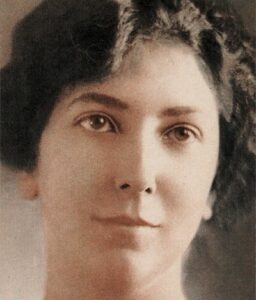 In 1916, she made a retreat for the Spiritual Exercises. She read the autobiographical account that Thérèse of Lisieux had written and the experience had a profound effect on her pious and innocent character while also coming to the realization that she wanted to live for God alone. Fernández Solar had to work to overcome her initial self-centered character towards that of one who cared for others, above all.

Her further inspiration for this self-transformation was her upcoming First Communion which led her to this commitment in an effort to achieve worthiness of what she was soon to receive. Fernández Solar received her Confirmation on 22 October 1909 and made her First Communion later on 11 September 1910. In September 1917 she sent a letter to the prioress of the Discalced Carmelite convent close to her home expressing her desire to enter the order.

On October 18 1917, a nun distributed candies to the children but she grew frustrated when she was given a small piece so hurled it out of her hand and refused another piece that the nun offered her. In late 1917 she and her mother left church and she turned to her mother in abruptness and asked whether she knew she would become a religious to which her mother told her that decision was for her father to make.

Solar did not pursue it until from school she sent a letter to her father on 25 March 1919 that received no response; she returned home for a brief period but did not mention it and her father never alluded to it either but before she left for school again he consented when she asked him about it. On 7 May 1919 she entered the novitiate of the Discalced Carmelites in Los Andes.

She was 19, when she joined the Monastery of Los Andes, taking the name Teresa. Her family supported her vocation, but wanted her to live closer to Santiago and to choose a more comfortable accommodation. Teresa rejected their entreaties, believing that this austere Carmelite tradition offered the simple lifestyle she desired and the joy of living in a community of women absolutely devoted to God.

She entered the convent in May, 1919 and took the habit in October, although she had not yet taken final vows as a nun. Teresa had many mystical experiences and expressed a tremendous sense of joy in God’s love. She said, “I am the happiest person on earth. I desire nothing more because my entire being has been seized by God, who is Love. ” Teresa began an apostolate of letter-writing, sharing her thoughts on the spiritual life with many people. 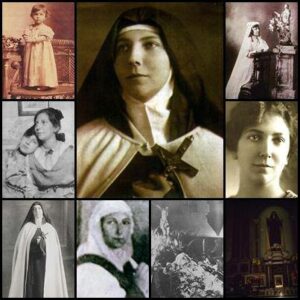 She focused her days on prayer and sacrifice, offering herself as a “spiritual victim” for the good of the Church and the sanctification of priests. As she said, “A Carmelite sanctifies herself in order to make all the Church’s members holy”. She was given the new religious name of “Teresa of Jesus”; and later received the habit on the 14 October. But she soon contracted typhus that was diagnosed as fatal.

However, some historians have suggested that she might have contracted Spanish flu, which was devastating Chile at this time. In any case, her condition grew worse on 2 April 1920 – Good Friday. During Lent she had told her confessor that she sensed she would die within a month. She asked for extra penance for the sins of mankind.

Sister Teresa was still three months short of turning 20 and had six months to complete her canonical novitiate so as to make her religious vows. But she nevertheless was allowed to profess her vows “in articulo mortis” (“facing death”) on 7 April 1920. Sister Teresa received the final sacraments on 5 April 1920 and later died at 7:15pm on 12 April 1920, one week after Easter.

Her remains were later relocated in 1940 to a new chapel. Teresa of Jesus remains popular with the estimated 100 000 pilgrims who visit on an annual basis the shrine where her remains are venerated in the Shrine of Saint Teresa of Los Andes in Los Andes. The nun is Chile’s first saint and is popular more so among women and adolescents.

Teresa of Jesus was the first Discalced Carmelite outside of Europe to be proclaimed as a saint and is the fifth saint of the order with the name “Teresa”. The beatification process began in the Diocese of San Felipe from 20 March 1947 until its closure a few decades later on 14 January 1972. Bishop Roberto Bernardino Berríos Gaínza inaugurated this process while Enrique Alvear Urrutia oversaw its closure in a solemn Mass.

Theologians collected her writings for assessment and approved them as being in line with the faith on 7 March 1975. The formal introduction to the cause came on 23 April 1976 under Pope Paul VI and she henceforth became titled as a Servant of God. There was a cognitional process that was also opened in San Felipe and it spanned from 17 November 1976 until 18 March 1978 while the Congregation for the Causes of Saints validated the two previous processes in Rome on 20 March 1981.

The postulation later submitted the Positio to the C.C.S. in 1985 at which point theologians approved the cause on 3 December 1985 as did the cardinal and bishop members of the CCS on 18 March 1986. The confirmation of her model life of heroic virtue on 22 March 1986 allowed for Pope John Paul II to title her as Venerable after the C.C.S. Prefect Cardinal Pietro Palazzini bought the document to the pope for promulgation.

The process for a miracle attributed to her opened in Chile where the healing originated in and it was subjected to a diocesan process for investigation from 19 October 1984 until 16 October 1985 while the C.C.S. later validated it on 23 May 1986. The board of medical experts approved this healing to be miraculous on 21 January 1987 while theologians did so as well on 20 February 1987 as did the C.C.S. on 3 March 1987.

John Paul II approved this healing to be a legitimate miracle on 16 March 1987 and thus confirmed her beatification. John Paul II beatified the late nun on 3 April 1987 in O’Higgins Park in Chile while her brother Luis was present at her beatification; he was the last direct relative of hers still alive then.

The process for a miracle attributed to her – the definitive one for sainthood – was investigated from 4 December 1990 to 12 June 1991 again in Chile while it received validation not long after on 18 October 1991. Medical experts reviewed this healing on 2 June 1992 as did theologians on 19 June 1992 and the C.C.S. on 7 July 1992. John Paul II confirmed the healing as a miracle on 11 June 1992 and he later canonized her on 21 March 1993 in Saint Peter’s Square. She is a patron saint of bodily ills, sick people, and young people.

In Saint Teresa of the Andes’ words, – ‘Only God can satisfy us. He is truth and unchangeable good. He is eternal love. Oh, my Jesus and my Mother, may I belong to Him forever. May nothing on earth claim my attention but the tabernacle. Preserve me pure for Yourself so that when I die I can say: how happy I am now that at last I can lose myself in the infinite Ocean of the Heart of Jesus, my adored Spouse.’

Heavenly Father, you granted special graces to Saint Teresa, “Flowerof the Andes”, which reflect the mysterious wisdom of your work in individuals whether young or old. You, Lord, have your own plan when it comes to who gets what in the realm of grace. All we can say is; “Praised be the Lord”!

May the singular graces and blessings by which Saint Teresa was favored, help us to discern and choose the right path, in Jesus’ Name we pray. Amen 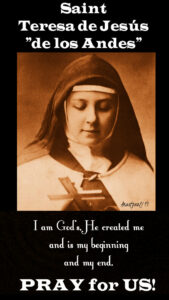 Saint Teresa of the Andes, pray for us.