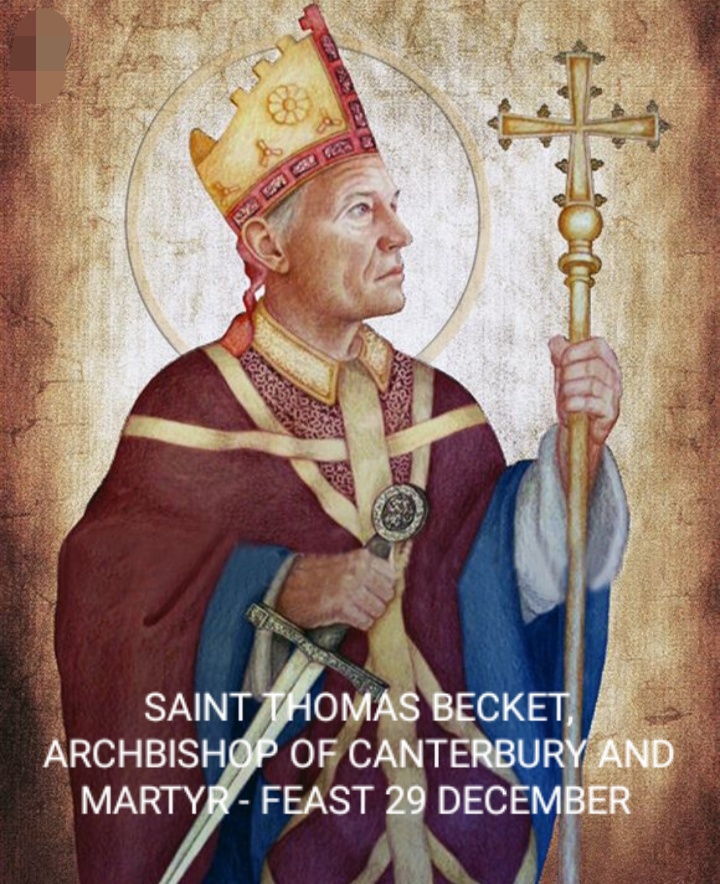 Thomas Becket, was Archbishop of Canterbury from 1162 until his murder in 1170. A strong man, he would have hesitated for just a moment, but realizing that one cannot be in league with evil, he strengthened himself to be a man of principal, a churchman, a martyr, and a saint—that was Thomas Becket, archbishop of Canterbury, murdered in his cathedral on December 29, 1170. Becket was born about 1119, or in 1120 according to later tradition, at Cheapside, London, on 21 December, the feast day of St Thomas the Apostle. The son of Gilbert and Matilda Beket, at the age of 10, Becket was sent as a student to Merton Priory south-west of the city in Surrey. He later attended a grammar school in London, at St Paul’s Cathedral.

Around the age of 20, he spent about a year in Paris, but he did not study canon or civil law at the time and his Latin skill always remained somewhat rudimentary. Some time after Becket began his schooling, Gilbert Becket suffered financial reverses and the younger Becket was forced to earn a living as a clerk. Gilbert first secured a place for his son in the business of a relative – Osbert Huitdeniers. Later Becket acquired a position in the household of Theobald of Bec, by then Archbishop of Canterbury.

Theobald entrusted him with several important missions to Rome and also sent him to Bologna and Auxerre to study canon law. In 1154, Theobald named Becket Archdeacon of Canterbury, and other ecclesiastical offices, included a number of benefices, prebends at Lincoln Cathedral and St Paul’s Cathedral, and the office of Provost of Beverley. His efficiency in those posts led Theobald to recommend him to King Henry II for the vacant post of Lord Chancellor, to which Becket was appointed in January 1155.

As Chancellor, Becket enforced the king’s traditional sources of revenue that were exacted from all landowners, including churches and bishoprics. King Henry sent his son Henry to live in Becket’s household, it being the custom then for noble children to be fostered out to other noble houses. Becket was nominated as Archbishop of Canterbury in 1162, several months after the death of Theobald. His election was confirmed on 23 May 1162 by a royal council of bishops and noblemen. Henry may have hoped that Becket would continue to put royal government first, rather than the church, but the transformation of Becket into an ascetic occurred instead.

Becket was ordained a priest on 2 June 1162 at Canterbury, and on 3 June 1162 was consecrated as archbishop by Henry of Blois, the Bishop of Winchester and the other suffragan bishops of Canterbury. A rift grew between Henry and Becket as the new archbishop resigned his chancellorship and sought to recover and extend the rights of the archbishopric. This led to a series of conflicts with the King, including one over the jurisdiction of secular courts over English clergymen, which accelerated antipathy between Becket and the king. Attempts by Henry to influence other bishops against Becket began in Westminster in October 1163, where the King sought approval of the traditional rights of royal government in regard to the church.

This led to the Constitutions of Clarendon, where Becket was officially asked to agree to the King’s rights or face political repercussions. King Henry II presided over assemblies of most of the higher English clergy at Clarendon Palace on 30 January 1164. In 16 constitutions he sought less clerical independence and weaker connections with Rome. He used his skills to induce their consent and apparently succeeded with all but Becket. Finally, even Becket expressed willingness to agree to the substance of the Constitutions of Clarendon, but he still refused formally to sign the documents. Henry summoned Becket to appear before a great council at Northampton Castle on 8 October 1164, to answer allegations of contempt of royal authority and malfeasance in the Chancellor’s office. Convicted, Becket stormed out of the trial and fled to the Continent.

Henry pursued the fugitive archbishop with a series of edicts, targeting Becket and all Becket’s friends and supporters, but King Louis VII of France offered Becket protection. He spent nearly two years in the Cistercian abbey of Pontigny, until Henry’s threats against the order obliged him to return to Sens. Becket fought back by threatening excommunication and an interdict against the king and bishops and the kingdom, but Pope Alexander III, though sympathising with him in theory, favoured a more diplomatic approach. In 1170, Alexander sent delegates to impose a solution to the dispute. At that point, Henry offered a compromise that would allow Thomas’ return to England.

In June 1170, Roger de Pont L’Évêque, Archbishop of York, was at York with Gilbert Foliot, Bishop of London, and Josceline de Bohon, Bishop of Salisbury, to crown the heir apparent, Henry the Young King. This breached Canterbury’s privilege of coronation. In November 1170, Becket excommunicated all three. On hearing reports of Becket’s actions, Henry is said to have uttered words interpreted by his men as wishing Becket killed. The wording that Henry uttered, was interpreted as a royal command. Four knights set out to confront the Archbishop of Canterbury.

On 29 December 1170, they arrived at Canterbury. According to accounts by the monk Gervase of Canterbury and eyewitness Edward Grim, they placed their weapons under a tree outside the cathedral and hid their armour under cloaks before entering to challenge Becket. The knights told Becket he was to go to Winchester to give an account of his actions, but Becket refused. Not until he refused their demands to submit to the king’s will did they retrieve their weapons and rushed back inside for the killing. Becket, meanwhile, proceeded to the main hall for vespers. The other monks tried to bolt themselves in for safety, but Becket said to them, “It is not right to make a fortress out of the house of prayer!”, ordering them to reopen the doors.

The four knights, wielding drawn swords, ran into the room crying, “Where is Thomas Becket, traitor to the King and country?”. They found Becket in a spot near a door to the monastic cloister, the stairs into the crypt, and the stairs leading up into the quire of the cathedral, where the monks were chanting vespers. On seeing them, Becket said, “I am no traitor and I am ready to die.” One knight grabbed him and tried to pull him outside, but Becket grabbed onto a pillar and bowed his head to make peace with God.

After his death, the monks prepared Becket’s body for burial. According to some accounts, it was found that Becket had worn a hairshirt under his archbishop’s garments, a sign of penance. Soon after, the faithful throughout Europe began venerating Becket as a martyr, and on 21 February 1173, little more than two years after his death, he was canonised by Pope Alexander III in St Peter’s Church, Segni. In 1173, Becket’s sister Mary was appointed Abbess of Barking as reparation for the murder of her brother. On 12 July 1174, amidst the Revolt of 1173–74, Henry humbled himself in public penance at Becket’s tomb and at the church of St. Dunstan’s, which became a huge pilgrimage site.

Becket’s assassins fled north to de Morville’s Knaresborough Castle for about a year. De Morville also held property in Cumbria and this too may have provided a hiding place, as the men prepared for a longer stay in the separate kingdom of Scotland. They were not arrested and Henry did not confiscate their lands, but he did not help them when they sought his advice in August 1171. Pope Alexander excommunicated all four. Seeking forgiveness, the assassins travelled to Rome, where the Pope ordered them to serve as knights in the Holy Lands for a period of 14 years.

Almighty God, you granted your martyr, Thomas Becket, favor to sacrifice his life willingly for the freedom of your Church. By his penances, help us to willingly renounce our life in this world, in the Name of Jesus Christ, so that we may find eternal life in heaven.

Father, you reward true faith with the crown of martyrdom. Grant us, by St Thomas Becket’s intercession, the courage to proclaim our faith by the witness of our lives. In Christ, your Son, who lives and reigns with you in the unity of the Holy Spirit, one God, for ever and ever. Amen 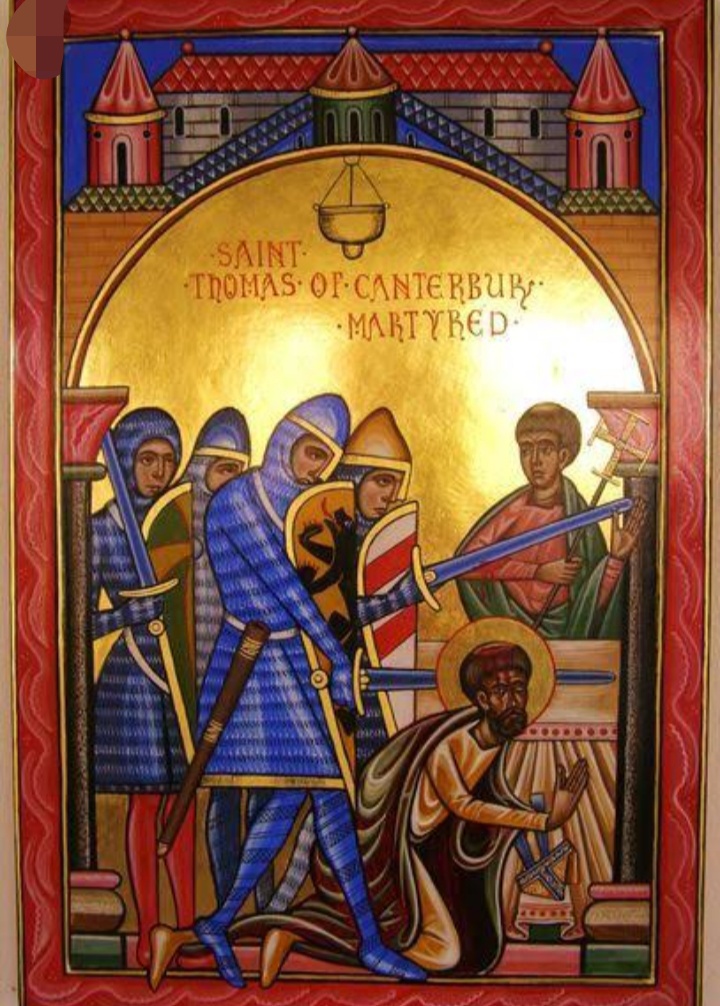 St Thomas Becket, Pray for Us!