FEAST OF THE IMMACULATE HEART OF MARY – 25th JUNE

FEAST OF THE IMMACULATE HEART OF MARY, COMMEMORATION OF THE DIVINE MOTHERHOOD OF OUR LADY – SPIRITUAL MOTHER OF THE CHURCH – 25th JUNE 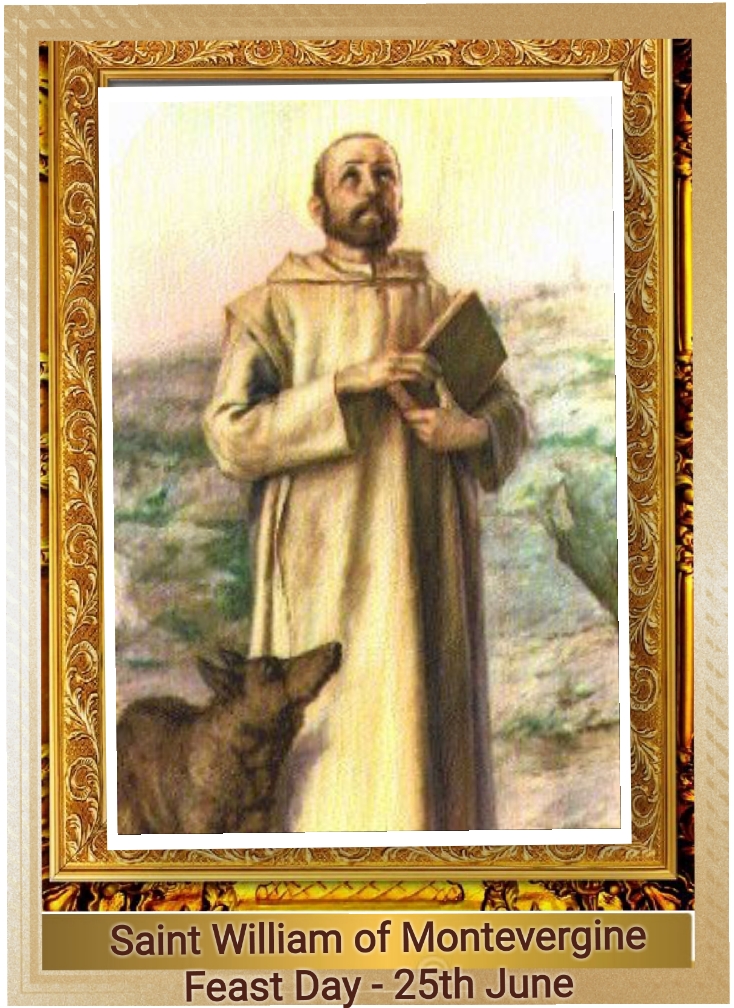 William of Montevergine, or William of Vercelli, (Italian: Guglielmo) (Latin Gulielmus) (1085 – 25 June 1142), also known as William the Abbot, was a Catholic hermit and the founder of the Congregation of Monte Vergine, or “Williamites”. He is venerated as a saint by the Roman Catholic Church.

He was born in 1085 into a noble family of Vercelli in northwest Italy and brought up by a relation after the death of his parents. He undertook a pilgrimage to Santiago de Compostela. On his pilgrimage to Compostela, William asked a blacksmith to make an iron implement that would encircle his body and increase his suffering, and he wore it throughout the pilgrimage.

He was fourteen when he decided to go on pilgrimage – first to Santiago de Compostela, and then to the Holy Land. Like St Francis a century later, William gave up all he had in order to embrace a religious life. He freed himself from attachments to his family, gave up his noble title, put on a tattered habit, and left his home in Vercelli (Italy) barefoot.

Compostela was the most famous pilgrimage site of his time, and it was to the Spanish shrine that William turned his steps. His journey took five years, walking the whole way, living off of bread and water, enduring hardships, sleeping on the bare earth. Along the way he spoke intimately with God, and proclaimed the Gospel to those he met.

After he returned to Italy, he intended to go to Jerusalem and for this purpose he reached South Italy, but he was beaten up and robbed by thieves. William considered this misfortune a sign of God’s will to stay in South Italy and spread the message of Christ. Because of this, he decided not to travel to Jerusalem anymore and to settle in South Italy, on the summit of Monte Vergine (then known as Monte Vergiliana) between Nola and Benevento, where he lived as a hermit.

Here he attracted a number of followers and founded the Monastery of Montevergine. While at Montevergine, William of Vercelli is stated as having performed miracles. Roger II of Sicily served as a patron to William, who founded many monasteries for men and women in Sicily. The Catholic Encyclopedia states that Roger built a monastery opposite his palace at Salerno in order to have William always near him.

As a hermit, he embraced solitude – but solitude was difficult to maintain. His fame as a holy man spread throughout the region, and people began to visit the William’s eremitic cell. The hermit became the abbot of a small community, the germ of the Order of Monte Vergine, which was officially recognised in 1126.

The inflow of the faithful was for the priests the opportunity to exercise their ministry, and the hermit life that William sought was compromised. Moreover, his confreres did not tolerate that lifestyle too austere and full of privations. Therefore, he left Montevergine in 1128 and settled on the plains in Goleto, in the territory of Sant’Angelo dei Lombardi, between Campania and Basilicata, where he began a new monastic experience, a double monastery built mostly by women.

Subsequently, he founded several other monasteries of the same rule, but mostly remained in Goleto except for some trips to Apulia. Eventually he died in Goleto on June 25, 1142. His remains were buried in Goleto, where they stayed until they were transferred to Montevergine on September 2, 1807, as ordered by the king of Naples Gioacchino Murat. Some of his relics are also located in other cathedrals (Benevento) and Italian churches. Catholic tradition states that William foresaw his own imminent death “by special revelation”.

The most reliable source concerning William of Vercelli’s life is the Legenda de vita et obitu sancti Guilielmi Confessoris et heremitae, written in the first half of the 13th century, thus shortly thereafter. The remaining later sources contain corrupt or even invented accounts of his life, therefore they are unreliable although not necessarily false, as primary sources have been lost.

According to all the sources, including the earliest source, Legenda de vita et obitu sancti Guilielmi Confessoris et heremitae, all of which are close to Catholicism, he performed many miracles. The best-known miracle was and still is the “Miracle of the Wolf” (1591). Because of this, he is often depicted in company with a “domesticated” wolf, even in the monastery of Montevergine.

One day a wolf hunted and killed a donkey the saint used for towing and other tasks. The saint then turned to the wolf and ordered the beast to offer himself to do all the donkey’s previous tasks. The wild beast reportedly became tame, and the people who met the saint were astonished to see such a docile wolf. The abbey St William founded prospered thanks to generous gifts.

Among the friends of the monastery was Roger II, the Norman king. On a journey to see his royal patron, St William’s strength began to fail him. He died in the year 1142, at the monastery he founded at Goleto. His relics remained there until they were transferred to Montevergine in the 19th century. In 1942, 800 years after his death, Pope Pius XII declared him the primary patron of Irpinia.

O God, Who looks at the whole of creation with infinite love, guide us this day to develop spiritual wisdom, and love for our fellowmen. Bless all of us, our family and friends and those who have departed before us.

We pray for the suffering in our family and in the nations of the world. In humility and submission we offer up our afflictions as the crosses you have deigned us to carry, just as St William did, in Jesus’ Name. Amen 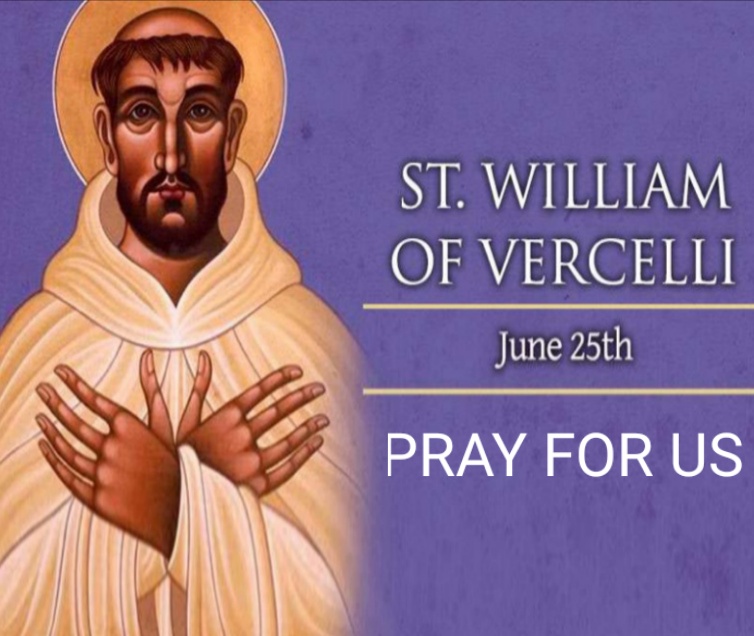 Saint William of Montevergine, pray for us.