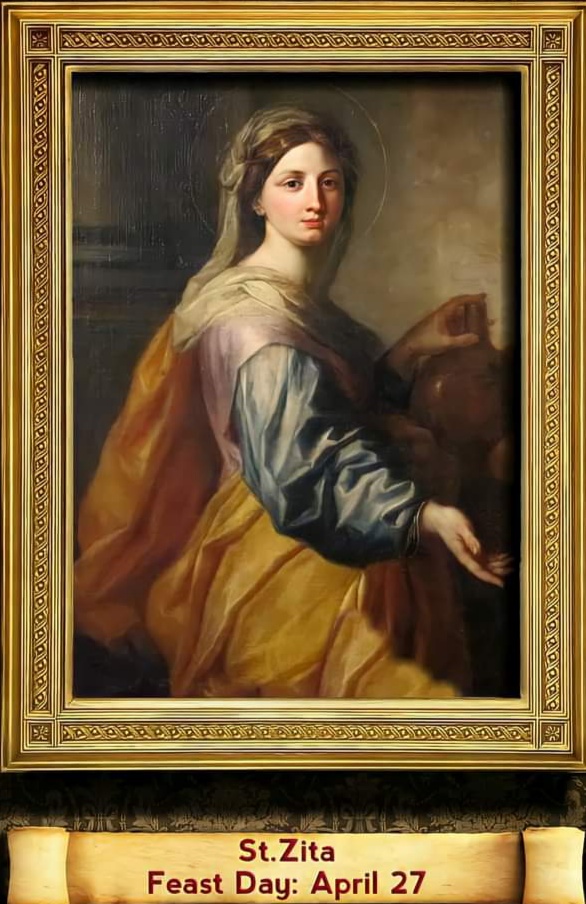 Zita (c. 1212 – 27 April 1272), also known as Sitha or Citha, is an Italian saint, the patron saint of maids and domestic servants. She is often appealed to in order to help find lost keys. She is often confused with St. Osyth or Ositha an important English Saint with a town named after her.

Zita entered domestic service at the age of twelve, and served the same family for almost fifty years. Through her diligence and fidelity, she became a trusted and valued servant. She spent her days in doing ordinary things extraordinarily well. Zita was known for her kindness and generosity to the poor.

Zita was born in Tuscany in a village not far from Lucca, to Giovanni and Buonissima Lombardo. Her maternal uncle, Graziano, was a hermit who dwelt on a neighboring mountain where he had built a church and a shelter for travelers. Her elder sister became a Cistercian nun. At the age of 12, she became a servant in the household of the Fatinellis, a well-to-do family of silk merchants. 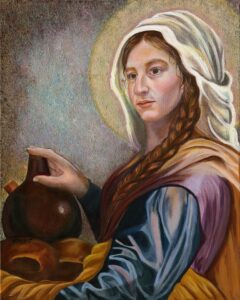 Signora Fatinelli allowed Zita to attend school for a year and then put her to be trained under an older maid. Seeing how fond everyone was of Zita, the older maid did everything in her power to discredit her as negligent and lazy. Zita never attempted to defend herself. The other servants interpreted her piety as posturing. By her meek and humble self-restraint, she at last succeeded in overcoming the malice of her fellow-servants.

She gave one-third of her wages to her parents, kept a third, and gave the rest to the poor. The mistress of the house placed Zita in charge of the household almsgiving, and allowed her to visit the sick poor in their own homes and tend to their needs. A small room isolated from the rest of the house was put at Zita’s disposal. She would venture out in the evenings and invite some poor homeless woman to supper. The room had a bed, and was offered as safe shelter for the night.

She always rose several hours before the rest of the family and took care to hear Mass every morning before she began work. She attended to her tasks with diligence and fidelity, and studied when possible to anticipate what needed to be done. It was Signora Fatinelli’s dying wish that Zita be placed in charge of the household. Zita continued to serve the Fatinellis after the death in 1260 of Guglielmo Fatinelli, when his son Pagano became head of the family. 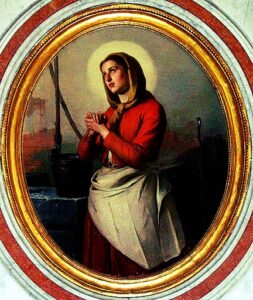 Saint Zita gradually came to exercise great influence over her master and could silence his rages, which were very frequent, with one word. The Fatinellis came to realize that Zita was very close to God, and they said: “We must not bind her hands.” They permitted her to dispense the bounty of the mansion at Lucca to the sick and the poor of the area. Zita, however, always used this money judiciously and with their authorization.

There are various miracles attributed to her, like the miracle of the loaves. On one morning, Zita left her chore of baking bread either to tend to someone in need, or was deep in prayer in her room. She returned to find in the kneading-trough the loaves all ready set and prepared, or already baked. Since neither the servants nor the mistress knew who had prepared the bread, it was commonly attributed to angels.

On another occasion, Zita was returning from distributing alms when she encountered a beggar. Having nothing left to give him, she accompanied him to the village well to draw him a cool drink. She let a copper jug down into the well, and in the act of holding it out to him, made the sign of the cross over the water, praying that this drink might be blessed to the poor wayfarer. As he made to drink, he found that the water had turned into wine.

Zita died peacefully in the Fatinelli house on April 27, 1272. It is said that a star appeared above the attic where she slept at the moment of her death. She was 60 years old, and had served and edified the family for 48 years. By the time of her death, she had become practically venerated by the family. After 150 miracles had been attributed to Zita’s intercession and recognized by the church, she was canonized in 1696.

Her body was exhumed in 1580, and was discovered to be incorrupt. Saint Zita’s body is currently on display for public veneration in the Basilica di San Frediano in Lucca. Guilds were established in Zita’s honor to provide homes for servants temporarily out of work, to care for those aged or incurably ill, and to provide terms of long service. Soon after Zita’s death a popular cult grew up around her, centering on the Basilica of San Frediano in Lucca. 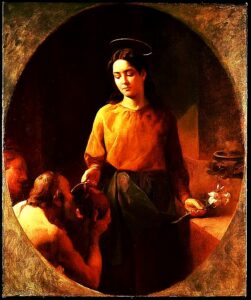 During the late medieval era, her popular cult had grown throughout Europe. In England she was known under the name Sitha, and was popularly invoked by maidservants and housewives, particularly in event of having lost one’s keys, or when crossing rivers or bridges.

Images of Saint Zita may be seen in churches across the south of England. The church of St Benet Sherehog in London had been thought to have a chapel dedicated to her, but this is a confusing mistake and the chapel is to St Osyth or Ositha and was locally known as St. Sithes. Both saints were sometimes referred to as “Citha”. However, despite the gaining popularity, especially amongst women at this time, the cult was not an official one.

Pope Leo X sanctioned a liturgical cult within the church in the early 16th century, which was confirmed upon her canonization. In 1748, Pope Benedict XIV added her name to the Roman Martyrology. Zita is the patron saint of domestic workers, housekeepers, waitresses, and household chores. Her feast day in the Roman Catholic Church is April 27. To this day, families bake a loaf of bread in celebration of Saint Zita’s feast day.

O Divine Master, you taught your faithful servant, Blessed Zita, through prayer and perseverance that no labor in your name is ever lowly. In like manner help us in all our daily tasks to do what pleases you and ever avoid what displeases you, that we may become fellow citizens with the saints and domestics of God: Who lives and reigns, world without end. Amen 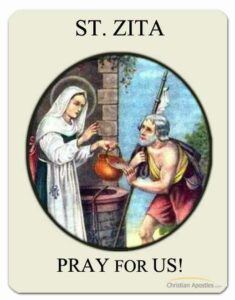