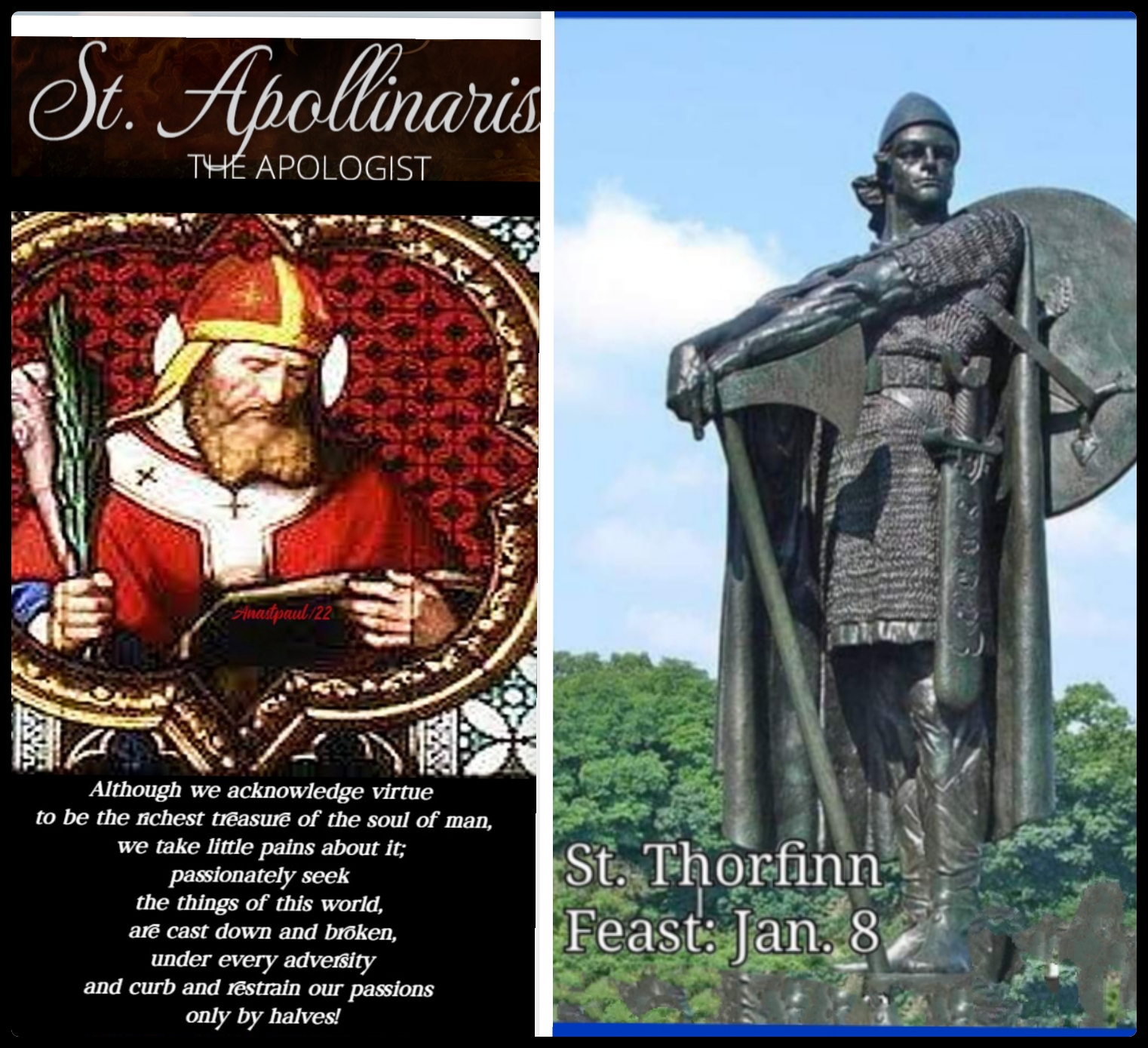 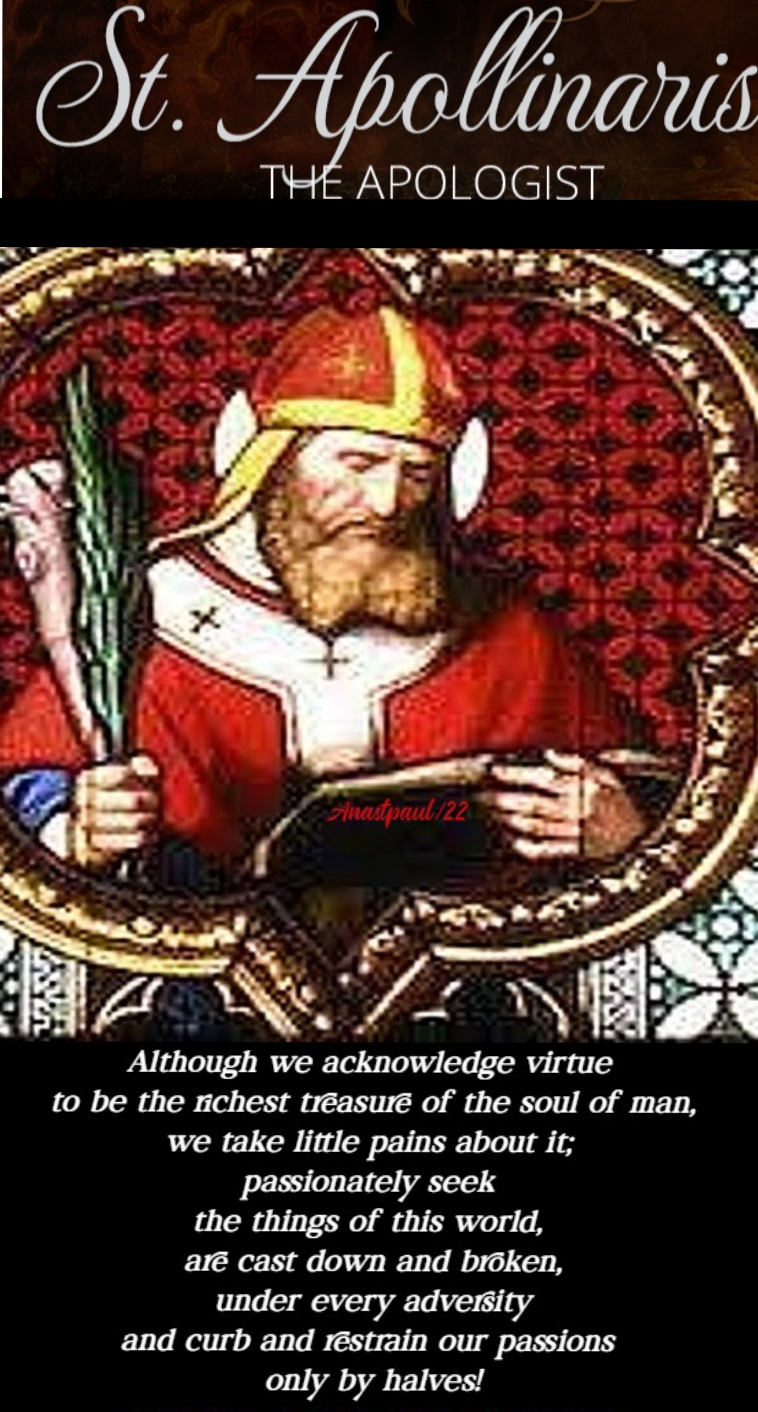 Claudius Apollinaris was born in Turkey, Europe. He was appointed bishop of Phyrgia, Ravenna and his episcopal term lasted for 26 years, in Phrygia and became famous for his polemical treatises against the heretics of his day, whose errors he showed to be entirely borrowed from the pagans. In 177 he published an “Apologia” for the Christians, addressed to Marcus Aurelius, and appealing to the Emperor’s own experience with the “Thundering Legion”, whose prayers won him the victory over the Quadi. The exact date of his death is not known, but it was probably while Marcus Aurelius was still Emperor. He was said to have passed away in the late 2nd century.

Claudius Apollinaris was one of the most illustrious prelates of the second age. Notwithstanding the great encomiums bestowed on him by Eusebius, St. Jerome, Theodoret, and others, very little is known of his actions, and his writings, which then were held in great esteem, seem now to be all lost. He wrote many able treatises against the heretics, and pointed out, as St. Jerome testifies, from what philosophical sect each heresy derived its errors. Nothing rendered his name so illustrious, however, as his noble apology for the Christian religion which he addressed to the Emperor Marcus Aurelius, about the year 175, soon after the miraculous victory that the prince had obtained over the Quadi by the prayers of the Christians.

St. Apollinaris reminded the emperor of the benefit he had received from God through the prayers of his Christian subjects, and implored protection for them against the persecution of the pagans. Marcus Aurelius published an edict in which he forbade any one, under pain of death, to accuse a Christian on account of his religion. By a strange inconsistency, he had not the courage to abolish the laws then in force against the Christians, and, as a consequence, many of them suffered martyrdom, though their accusers were also put to death. The Roman Martyrology mentions him on the 8th of January.

Many accounts portray him as to have passed away as a martyr, others that he was the disciple of St, Peter and others suggest that he was from Antioch. He was, at one point, removed from the roster of saints, in the liturgical reforms after the second Vatican council but was later restored in 2002’s edition of the Roman Missal. St. Apollinaris the Apologist is the patron saint of Ravenna, Italy.

Eternal God, in the extraordinary lives of your appointed ones who, living with zeal and courage, gave up their lives for the honor of their God and their faith, Saint Apollinaris, is one, of whom we know little about, except what is most important.

Having been ordained to participate in the richness of the priesthood of Christ, he gave witness to the faith that your people memorialized, spreading among the nations the unsearchable riches of Christ, leading his flock as a good shepherd, and honoured the Church of Classis near Ravenna by a glorious martyrdom. Help us to lead lives that are equally deserving of honor and commemoration in Jesus’ Name. Amen 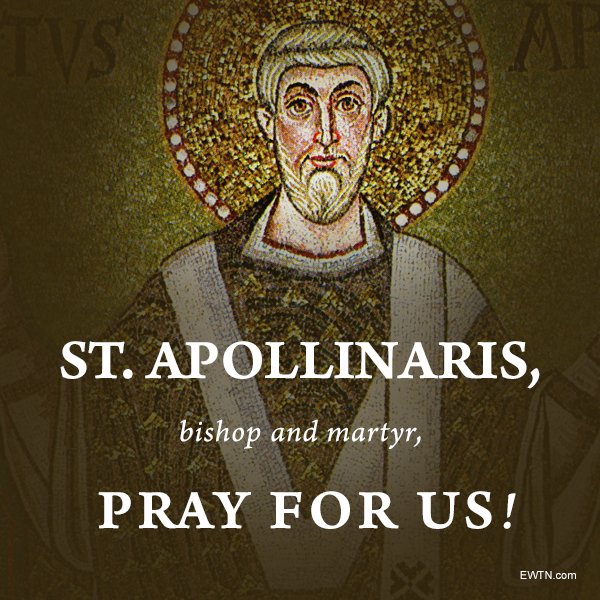 Saint Apollinaris, pray for us! 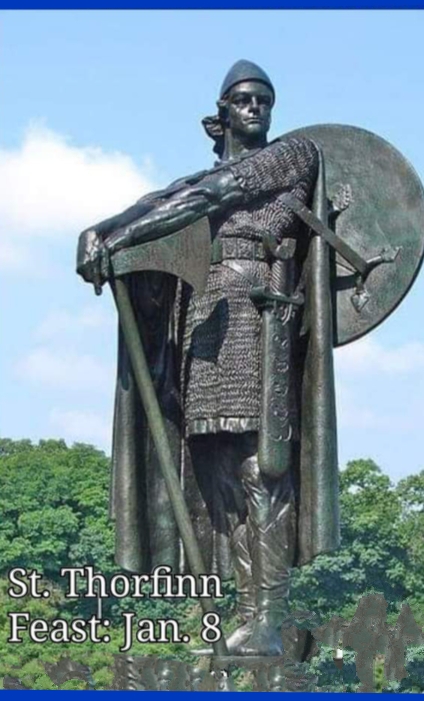 In the year 1285, there died in the Cistercian monastery at TerDoest, near Bruges, a Norwegian bishop named Thorfinn. He had never attracted particular attention and was soon forgotten. But over fifty years later, in the course of some building operations, his tomb in the Church was opened and it was reported that the remains gave out a strong and pleasing spell.

The Abbot made inquiries and found that one of his monks, and aged man named Walter de Muda, remembered Bishop Thorfinn staying in there monastery and the impression he had made of gentle goodness combined with strength. Father Walter had in fact, written a poem about him after his death and hung it up over his tomb. It was then found that the parchment was still there, none the worse for the passage of time.

This was taken as a direction from on high that the Bishop’s memory was to be perpetuated, and Father Walter was instructed to write down his recollections of him. For all that, there is little enough known about Saint Thorfinn. He was a Trondhjem man and perhaps was a Canon of the Cathedral of Nidaros, since there was such a one named Thorfinn among those who witnessed the agreement of Tonsborg in 1277.

This was an agreement between King Magnus VI and the Archbishop of Nidaros confirming certain privileges of the clergy, the freedom of episcopal elections and similar matters. Some years later, King Eric repudiated this agreement, and a fierce dispute between Church and state ensued. Eventually the King outlawed the Archbishop, John, and his two chief supporters, Bishop Andrew of Oslow and Bishop Thorfinn of Hamar.

Bishop Thorfinn, after many hardships, including shipwreck, made his way to the Abbey of TerDoest in Flanders, which had a number of contacts with the Norwegian Church. It is possible that he had been there before, and there is some reason to suppose he was himself a Cistercian of the Abbey of Tautra, near Nidaros.

After a visit to Rome he went to TerDoest, in bad health. Indeed, though probably still a youngish man, he saw death approaching and so made his will; he had little to leave, but what there was, he divided between his mother, his brothers and sisters, and certain monasteries, churches and charities in his dioceses. He died shortly after on January 8, 1285.

After his recall to the memory of man as mentioned in the opening paragraph of this notice, miracles were reported at his tomb and St. Thorfinn was venerated by the Cistercians and around Bruges. In our own day, his memory has been revived among the few Catholics of Norway, and his feast is observed in his episcopal city of Hamar.

The tradition of Thorfinn’s holiness ultimately rests on the poem of Walter de Muda, where he appeared as a kind, patient, generous man, whose mild exterior covered a firm will against whatever he esteemed to be evil and ungodly. His feast day is January 8th.

Saint Thorfinn may have lived a solitary life, but it was one rich in love for you Lord, and service to his fellow man. Help us emulate his example and be worthy in your eyes dear Lord, in Jesus’ Name. Amen 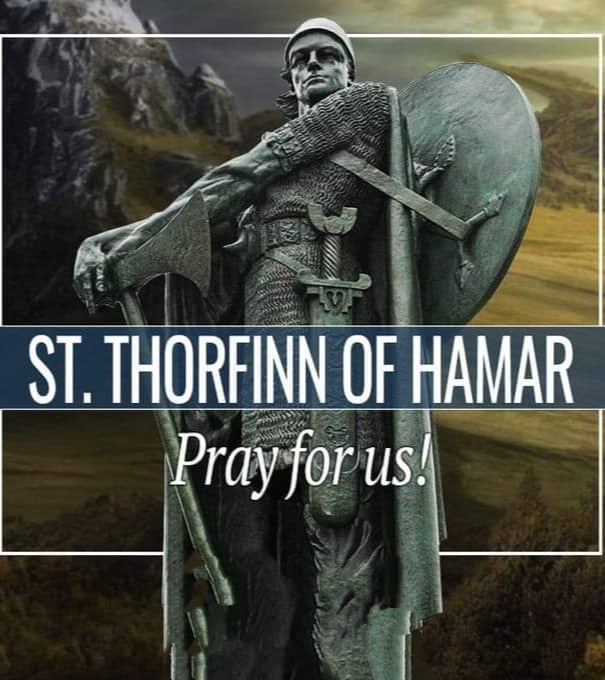 Saint Thorfinn, pray for us.