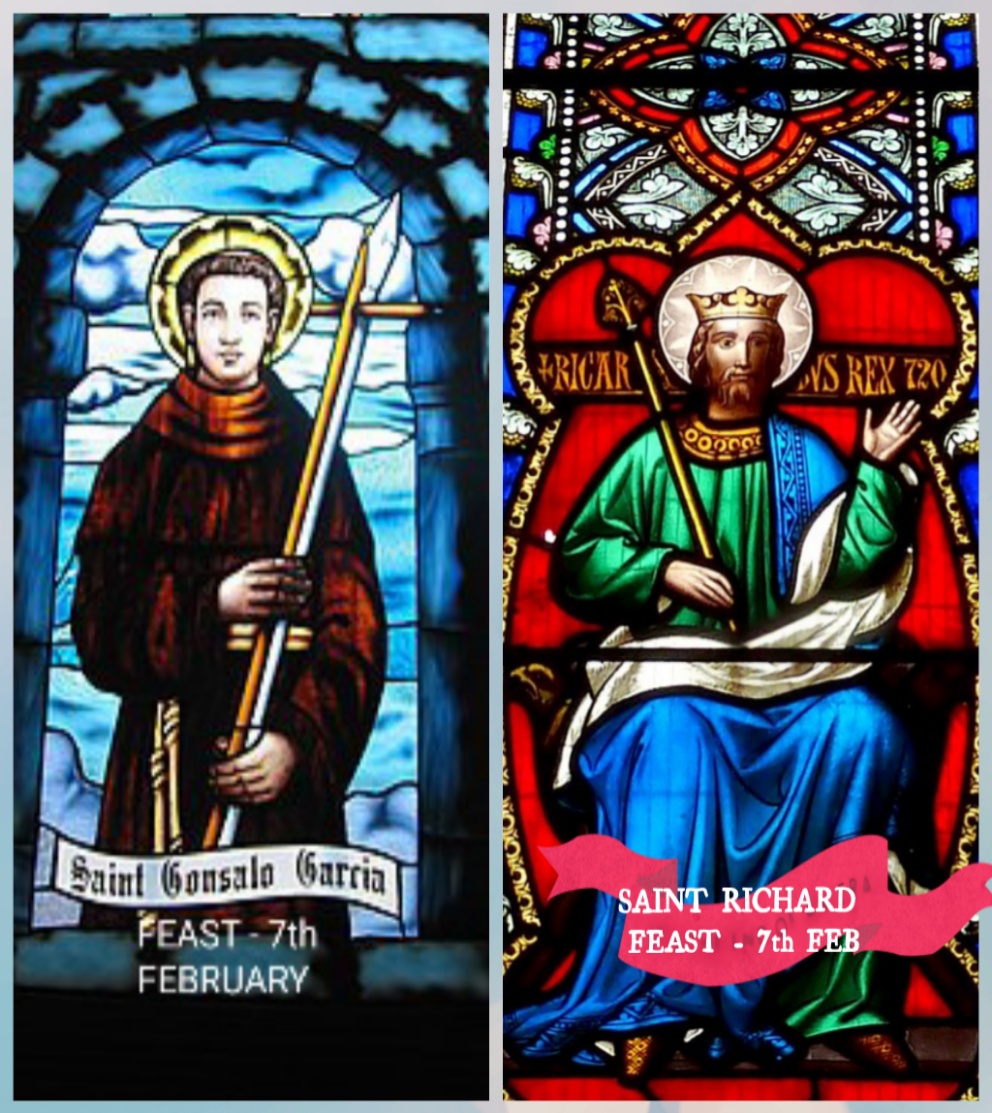 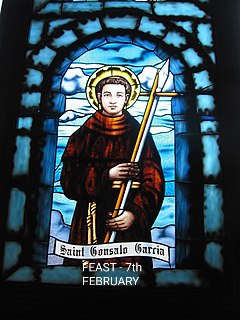 Gonsalo Garcia was born in 1557, in Agashi village which is in Bassein. His father was a Portuguese soldier and his mother a Canarim as the Portuguese called the inhabitants of the Konkan, from Bassein. The fort was reserved for the European people and their servants. According to the policy adopted by the Portuguese colonial government, any Portuguese who got married with a local woman was given certain privileges. So Garcia’s father was permitted to stay in the fort as a civilian employee, along with his family.

Garcia studied at the Jesuit school in Fort Bassein and helped in their Igreja do Santo Nome de Jesus (Church of the Holy Name of Jesus), now known as St. Gonsalo Garcia Church. Here Garcia came into contact with the Jesuit priest, Sebastião Gonsalves, who became a friend and guide throughout his life. During his stay with the Jesuits, he learned grammar, philosophy and Roman history.

In 1580, Garcia left Bassein with some Jesuit missionaries, headed to join their mission in Japan. He quickly acquired a knowledge of the language. As a missionary, he went about in public places drawing children to himself by his amiable disposition, by his fluency in the language of the country and by his kindness. He served faithfully as a catechist for eight years. On leaving the Jesuits, Garcia went to the city of Alacao and established himself as a merchant. During his frequent business visits to Manila he became acquainted with Franciscan Friars, and being drawn towards them, joined as a lay brother.

Garcia was delighted to be accepted into the Franciscan order. In Manila, he came into contact with the Franciscan missionary, Friar Pedro Bautista, who remained his companion until their shared death. Garcia started his career as a catechist in Manila. The main advantage for him was his ability to speak the Japanese language. From the different parts of Japan, people began to send him invitations to return. It was at this time that the King of Spain wanted to send a delegation to Japan.

The Spanish Governor of Manila selected Peter Baptist as the leader of the delegation, and, since he did not know the Japanese language, Garcia was selected as his translator as well as his companion. Garcia was so happy with this offer that he immediately accepted the responsibility. The missionaries left Manila on 26 May 1592. In Japan, Garcia became the center of attraction, as he knew the Japanese language well.

The Franciscans began their missionary work in Kyoto, Osaka, etc. The Japanese regent Toyotomi Hideyoshi was very friendly with these Franciscans. It was a time when Jesuits were facing lot of opposition in Japan. The people of Japan appreciated the simple way of living adopted by these Franciscan missionaries. It helped them to accelerate their conversion program. Many Japanese, including their overlords, began to accept Christianity. Slowly Japan became the great center of evangelization for the missionaries.

In October 1596, the Spanish ship San Felipe, bound from Manila to Acapulco, was driven by typhoons to the coast of Japan. Laden with gold and silver it beached on a sandbar in Urado Bay. The pilot, Francisco de Olandia, conversing with the Japanese customs officials, spoke of La Espanha de los Conquistadores and boasted that the King of Spain had captured many countries in the world. He told them that the King of Spain sent the missionaries to instigate people against their ruler.

When this was reported to Toyotomi Hideyoshi, he became enraged. The situation was exploited by Yakuin Zenso, his physician and close advisor. The shogun issued an order to arrest and execute all Christian missionaries in Japan. The Franciscans, including Bautista, Garcia and others were arrested on 8 December 1596 and were sentenced to death. There were three Jesuits also, including the native seminarian, Paul Miki.

On 4 January the prisoners who had been sentenced to death began their journey from Kyoto, reaching Nagasaki on 4 February 1597. The next morning they were taken to a hill known as Nishigaoka. As Garcia was prominent among the missionaries, he was given the middle place. The execution started at 10 o’clock in the morning. He, Peter Baptist, and the other friars were crucified, along with fifteen teenage boys who were members of the Third Order of Saint Francis, as well as the three Jesuits.

The condemned were so tired that they could not endure it for long and within half an hour everything was over. The Portuguese and Japanese Christians attending the execution broke past the guards and started soaking pieces of cloth in the blood of the executed, gathering lumps of the blood-soaked dirt, and tearing up their religious habits and kimonos for holy relics. The guards beat the relic-hunters away and order was reestablished. Guards were positioned around the hill to keep onlookers at a distance.

In 1627, the twenty-six were declared venerable by Pope Urban VIII. In 1629 their veneration was permitted throughout the Universal Church. The matter was neglected for more than two centuries and was once again taken up in 1862, and on 8 June 1862 Pope Pius IX canonized Gonsalo Garcia and his co-martyrs. Brother Gonsalo Garcia became St. Gonsalo Garcia, the first Catholic saint of India and the Indian sub-continent. 8 June 2012 marked the 150th anniversary of his canonization.

Garcia’s memory is kept alive with a college named after him in Vasai. He is the patron saint of the Roman Catholic Archdiocese of Mumbai and the Diocese of Vasai and his feast day is a joint one for the group of martyrs, on 6 February and celebrated in India on 7 February. Garcia’s relevance even today lies in the universalism of his charity and love. A statue of Gonsalo Garcia was taken from Portugal to Recife in Brazil in 1745 by a local Brazilian, where his veneration soon began.

Eternal God, celebrating the feast of the virtuous martyr, Saint Garcia, we pray that his blood shed for the faith may so revitalize the Church in India and Japan that propelled by his courage and sacrifice more and more people may zealously accept the Catholic faith and live it with commitment. We make this prayer in the Name of Jesus. Amen. 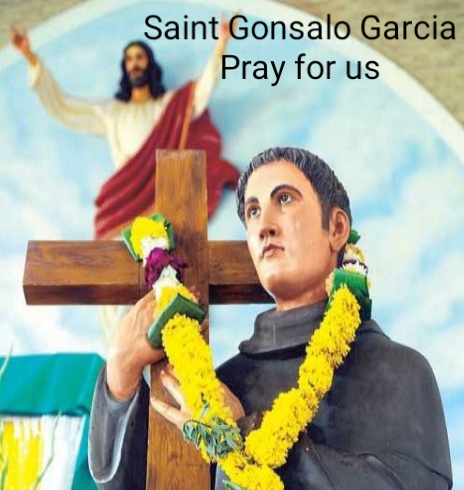 Saint Gonsalo Garcia, pray for us. 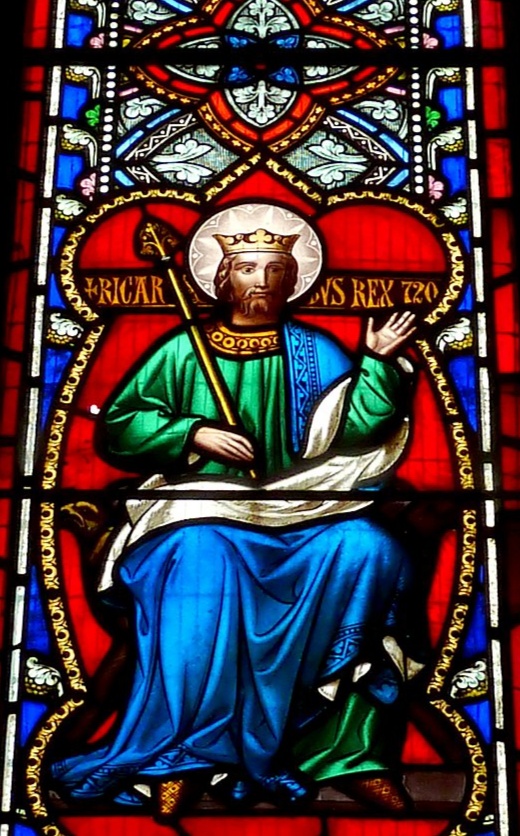 He led his family on a pilgrimage to the Holy Land but died en route in Lucca, where he was buried in the church of Saint Fridianus. The reigning king of the West Saxons in 720 was King Ine, who ascended the throne in 688 and died in or possibly after 726. Bede states that he abdicated after 37 years, i.e. 725–26. The Anglo-Saxon Chronicle refers to him abdicating in and around 726–28, then traveling to Rome and dying there.

Richard was from Wessex, England, and his real name is uncertain. He appears to have been an Anglo-Saxon chieftain or a Brittonic under-king in Wessex, probably of part of Devon. His wife was Saint Wuna of Wessex, and they were the parents of Willibald, Bishop of Eichstätt, Saint Winibald, Abbot of Heidenheim, and Walpurga, Abbess of Heidenheim. He obtained by his prayers the recovery of his three-year-old son Willibald, whom he laid at the foot of a great crucifix erected in a public place in England, when the child’s life was despaired of in a grievous sickness.

In 720, he entrusted his eleven-year-old daughter Walpurga to the abbess of Wimborne in Dorset, renounced his estates, and set sail with his two sons from Hamblehaven near Southampton. They landed in France and temporarily stayed in Rouen. From there, they set off on the pilgrimage to Italy, where they prayed at shrines situated along the way.

He died unexpectedly after developing a fever in Lucca, Tuscany, where he was buried in the Church of San Frediano, founded by the Irish monk Fridianus. Miracles were reported to have occurred at his tomb and a cult venerating him developed. The people of Lucca gave him the name “Richard” and embellished their accounts of his life, describing him as an English prince. Another apocryphal story described him as the Duke of Swabia in Germany.

His son, Willibald, continued the pilgrimage to the Holy Land. Richard’s niece, a nun called Hygeburg (Huneburc of Heidenheim), wrote an account of the pilgrimage, entitled “Hodoeporicon”; historians date the text between 761 and 786. Some of Richard’s relics were transported to Eichstätt, where Willibald eventually became Bishop. Richard’s feast day is 7 February.

Richard is depicted with the Blessed Mother and his three children at Eichstätt Cathedral. In religious artworks, Richard is portrayed as a royal pilgrim in an ermine-lined cloak with two sons, one a bishop and one an abbot. His crown appears to lie on a book (Roeder). Richard is particularly venerated at Heidenheim and Lucca.

The Saint’s sons helped their uncle, St. Boniface, the apostle of Germany, to evangelize the Franks. His daughter became abbess of Heidenheim and ran a school for the children of Frankish nobles.

Lord God, You alone are holy and no one is good without you. Through the intercession of St. Richard help us to live in such a way that we may not be deprived of a share in Your glory.

In our Lord Jesus’ Name we pray. Amen 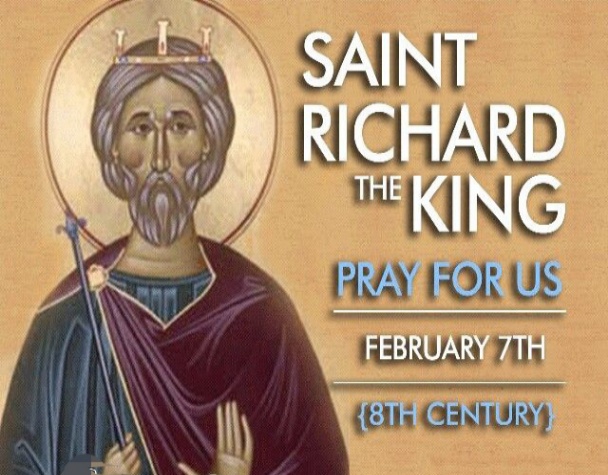 Saint Richard, King and Pilgrim, pray for us.