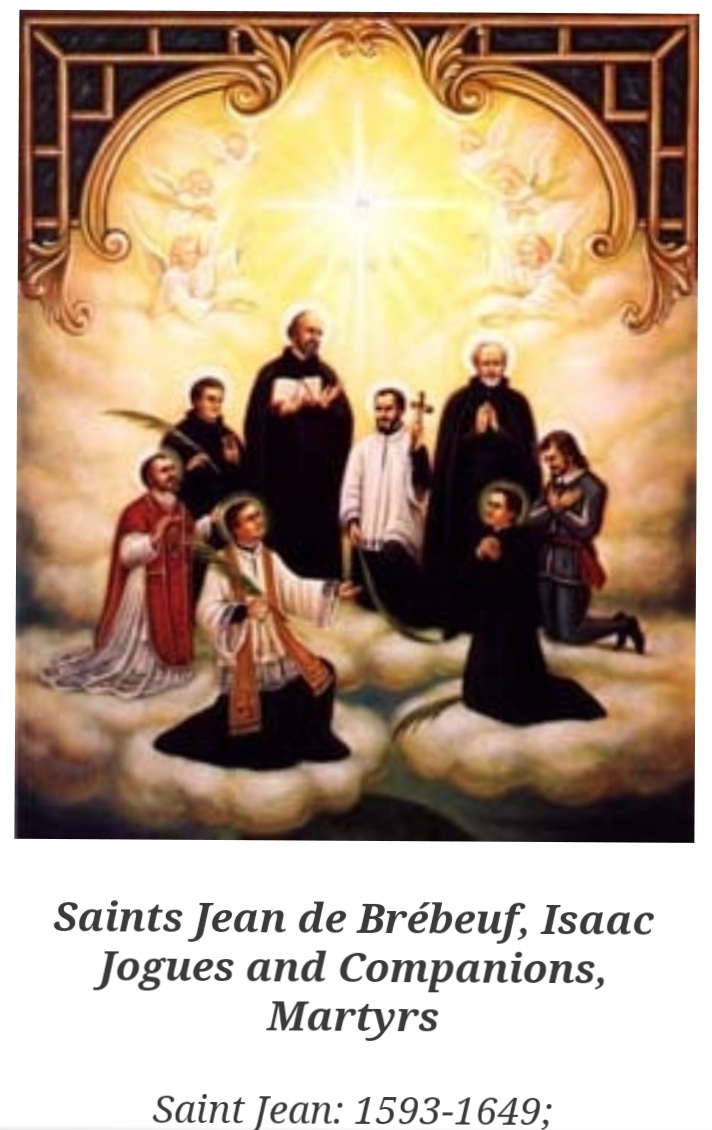 In the dense forests of Iroquois nation, Jean de Brébeuf, bound tightly to a post, looked high above, and prayed. An Iroquois war party had attacked his Huron mission and had taken all captive. The baptized and neophytes looked to him, needed him, and were captured with him. Saint Jean had long before witnessed, and chronicled, the Iroquois’ depraved treatment of their Indian enemies.

Now he was the captive and would be the victim. The painted braves prepared their instruments and the ritual of torment and butchery commenced. The Iroquis peeled Jean’s lips from his face, cut off his nose and ears, yet Saint Jean remained silent. They poured boiling water over his head in a mock baptism and pressed hatchets, glowing red hot, against his open wounds. A hard blow to the face split his jaw in two. This was pain beyond pain, a living holocaust.

The saint tried to boost the strength of his fellow captives with holy words, but the Indians cut out his tongue. Near the end, they indulged in the worst forms of cannibalism. Eye witnesses to Saint Jean’s torture and death, and that of Fr. Gabriel Lalemant, gave detailed accounts of what they had seen. Fellow Jesuits recovered the two bodies days later and verified their wounds. Brébeuf’s skull was placed in a reliquary in a convent in Quebec City. It is still there today. Frs. Charles Garnier and Noël Chabanel were killed later in the same year.

St. Jean de Brébeuf was born in Bayeux France. He left Bayeux to become a Jesuit priest. When he was chosen to become a missionary, he crossed an ocean to New France (Canada). He was well educated and was the first European to master the Huron language, study their customs, and he wrote a Huron-French dictionary. He was a mystic who had an intimate relationship with Our Lord and a vivid spirituality full of saints and angels.

He took a vow of personal perfection, striving to rid himself of every sin, no matter how small. He canoed thousands of miles over open waters, and trekked vast expanses of prairie and woods in search of a congregation for the Truth. In a frontier culture of trappers, loggers, and ruffians, he held his own.

The Indians called him “Echon”—one who carries his own weight. His oar was always in the water. For all this missionary labor, there was some success. But there was more disappointment. Some of his assassins were Huron apostates. Saint Jean was prepared for his martyrdom by many years of struggling to breathe inside of smoke-filled cabins, suffering the bites of swarms of mosquitoes, shivering through cold nights, eating disgusting food without complaint, and trekking rugged terrain while poorly shod.

Saint Jean prepared himself for death through disciplined prayer and meditation, and a profound acceptance of God’s will. Our faith teaches that grace builds on nature. The seed of faith planted in Saint Jean by his parents and priests was dropped into rich, black, human soil. God’s grace grew, thrived and never died in him. And that same powerful grace comes to us through the intercession of this mighty man.

Saint Isaac Jogues came as near to martyrdom as any man who ever lived to tell about it. Jogues was a professor in France who crossed the ocean to work among the Huron. He was kidnapped by Mohawks in 1642 and held captive for thirteen months, during which time he witnessed, and suffered from barbarity similar to that later suffered by Brébeuf. Jogues’ companion, Jesuit lay brother René Goupil, a trained medic, was tomahawked for making the sign of the cross on the forehead of a Mohawk boy.

Incredibly, just when Jogues was about to be burned alive he was rescued by Dutch traders from present-day Albany, New York. Jogues returned to France skeletal, lame, and with stumps where fingers had been chewed down to their knuckles. On home soil again, he went to the local Jesuit house, where the porter assumed he was an indigent beggar.

Jogues specifically requested to return to Canada, and crossed the Atlantic one last time in 1644. He was assigned to Montreal, where he crossed paths with Jean de Brébeuf, who thought Jogues was a living saint. When Jogues asked permission from his superiors to again evangelize among the Mohawks, he told a friend, “I will go, but I will not return”. He was a prophet. He and layman Jean Lalande were captured and tomahawked to death on October 18, 1646. Their severed heads were placed as trophies on Indian pikes. The North American martyrs were canonized in 1930.

Saints Jean de Brébeuf, Isaac Jogues, and companions, you died far from the comforts of home and family. You endured sufferings you did not deserve, for the greater glory of God. Grant us patience when we are impetuous, endurance when we get tempted to quit, humility when confronted with utter ignorance, and physical forbearance when starved of the comforts of life.

May we remain strong and sturdy in purpose and may we prioritize spiritual wellness even to the point of dying to the world to obtain eternal life in Jesus our Lord. Amen