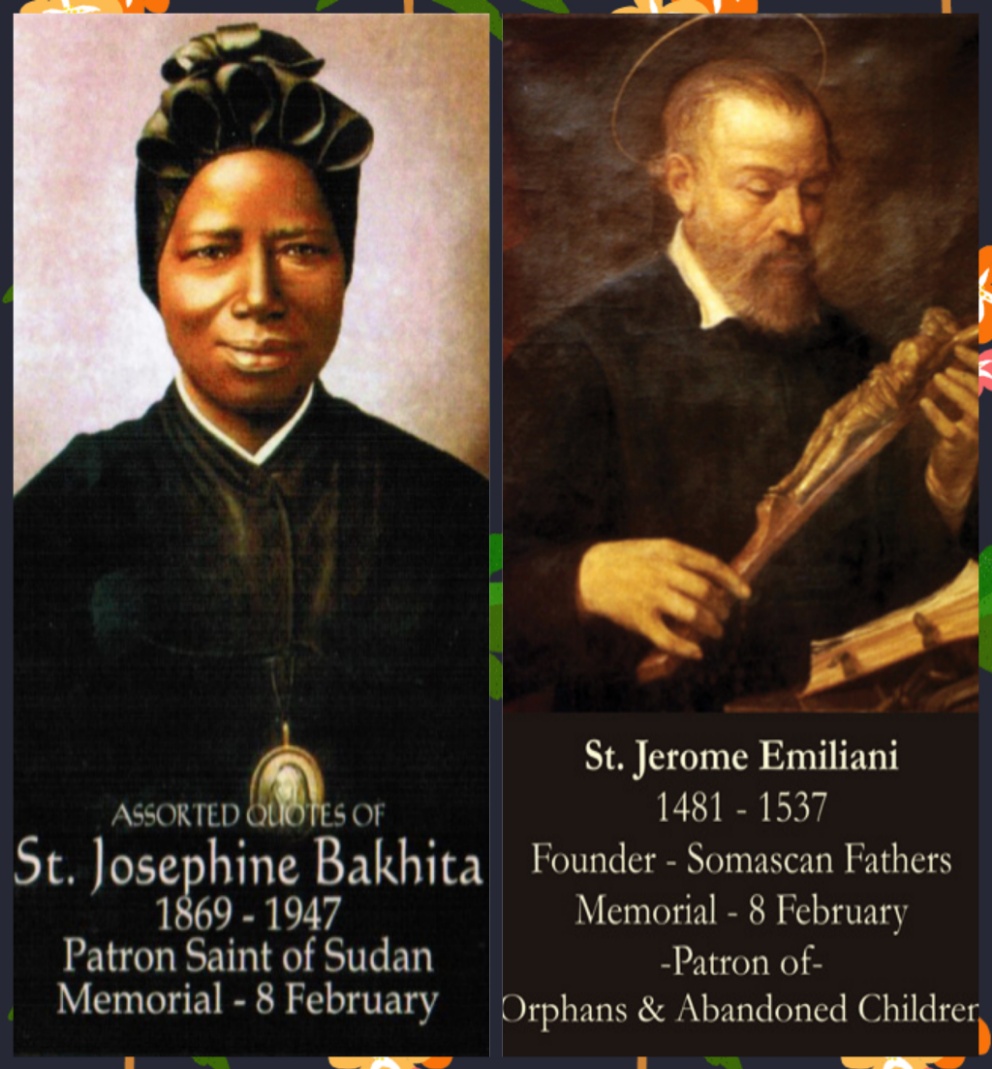 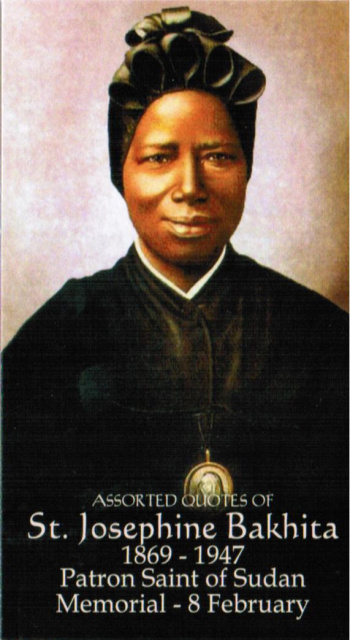 JOSEPHINE MARGARET BAKHITA, F.D.C.C. (ca. 1869 – 8 February 1947), was a Sudanese-Italian Canossian religious sister who lived in Italy for 45 years, after having been a slave in Sudan. In 2000, she was declared a saint, the first Black woman to receive the honor in the modern era. She was born around 1869 in Darfur (now in western Sudan) in the village of Olgossa. She was of the Daju people and her respected and reasonably prosperous father was brother of the village chief. She was surrounded by a loving family of three brothers and three sisters.

In 1877, she was seized by Arab slave traders, who had abducted her elder sister two years earlier and forced to walk barefoot about 960 kilometres. She was sold and bought twice before she arrived at El-Obeid. Over the course of twelve years, she was sold three more times and then given her freedom. ‘Bakhita’ was not the name she received from her parents at birth. It is said she took one given to her by the slavers, Bakhita, Arabic for ‘fortunate’. She was also forcibly converted to Islam.

Bakhita was bought by a rich Arab, as a maid for his two daughters. They treated her relatively well, until she offended one of her owner’s sons, wherein he kicked her so severely that she spent more than a month unable to move from her straw bed. Her fourth owner was a Turkish general, and she served both his wife and mother-in-law, who were cruel to their slaves. The most terrifying of all of her memories there was when slaves were marked by a process of both scarification and tattooing, which was a traditional practice throughout Sudan.

In 1883, Bakhita was bought in Khartoum by an Italian Vice Consul Callisto Legnani, who did not beat or punish her. Two years later, when Legnani himself had to return to Italy, Bakhita begged to go with him. At the end of 1884 they escaped from a besieged Khartoum with a friend, Augusto Michieli. They travelled 650 km. on camelback to Suakin, which was the largest port of Sudan. In March 1885 they left Suakin for Italy and arrived at the port of Genoa in April. Augusto Michieli’s wife, Maria Turina Michieli, was given ownership of Bakhita.

Her new owners took her to their family villa at Zianigo, near Mirano, west of Venice. She lived there for three years and became nanny to the Michieli’s daughter Alice, known as ‘Mimmina’. The Michielis brought Bakhita with them back to the Sudan where they stayed for nine months before returning to Italy. On 29 November 1888, Michieli left them in the care of the Canossian Sisters in Venice. There, cared for and instructed by the Sisters, Bakhita encountered Christianity for the first time. The holy mothers instructed her with heroic patience and introduced her to that God who, from childhood, she had felt in her heart without knowing who He was.

When Michieli returned to take her daughter and maid back to Suakin, Bakhita firmly refused to leave. After trying to force her for days, Michieli finally appealed to the attorney general of the King of Italy; while the superior of the Institute for baptismal candidates (catechumenate) that Bakhita attended contacted the Patriarch of Venice about her protegée’s problem. On 29 November 1889, an Italian court ruled that because the British had outlawed slavery in Sudan before Bakhita’s birth and because Italian law had never recognized slavery as legal, Bakhita had never legally been a slave.

Bakhita found herself in control of her own destiny, and chose to remain with the Canossians. On 9 January 1890 Bakhita was baptized with the names of Josephine Margaret and Fortunata. She was also confirmed and received Holy Communion from Archbishop Giuseppe Sarto, the Cardinal Patriarch of Venice and later Pope Pius X. On 7 December 1893, Josephine Bakhita entered the novitiate of the Canossian Sisters and on 8 December 1896, she took her vows, welcomed by Cardinal Sarto. In 1902 she was assigned to the Canossian convent at Schio, in the northern Italian province of Vicenza, where she spent her life.

Her only extended time away was between 1935 and 1939, when she stayed at the Missionary Novitiate in Vimercate (Milan), mostly visiting other Canossian communities in Italy, talking about her experiences and helping to prepare young sisters for work in Africa. A strong missionary drive animated her throughout her entire life – “her mind was always on God, and her heart in Africa”.

During her 42 years in Schio, Bakhita was employed as the cook, sacristan, and portress and was in frequent contact with the local community. Her gentleness, calming voice, and smile became well known and Vicenzans still refer to her as Sor Moretta (little brown sister) or Madre Moretta (black mother). Her special charisma and reputation for sanctity were noticed by her order. The first publication of her story (Storia Meravigliosa by Ida Zanolini) in 1931, made her famous throughout Italy. During the Second World War (1939–1945) she shared the fears and hopes of the townspeople, who considered her a saint and felt protected by her presence.

Her last years were marked by pain and sickness in a wheelchair, but she retained her cheerfulness, and if asked how she was, would always smile and answer: “As the Master desires.” In the extremity of her last hours, her mind was driven back to her youth in slavery and she cried out: “The chains are too tight, loosen them a little, please!” After a while, she came round again. Someone asked her, “How are you? Today is Saturday,” probably hoping that this would cheer her because Saturday is the day of the week dedicated to Mary, mother of Jesus. Bakhita replied, “Yes, I am so happy: Our Lady… Our Lady!” These were her last audible words.

Bakhita died at 8:10 PM on 8 February 1947. For three days, her body lay in repose while thousands of people arrived to pay their respects. Her remains were translated to the Church of the Holy Family of the Canossian convent of Schio in 1969. On 1 October 2000, she was canonized as Saint Josephine Bakhita by St. John Paul II. She is venerated as a modern African saint, and as the patron saint of modern Sudan and human trafficking survivors.

Heavenly Father, Saint Josephine, the little black slave lost her freedom when young. When an adult, she showed that freedom is not the goal, but the goal is the pathway to serving the Master of all.

From your throne in heaven, give hope to those enduring the indignity of physical slavery and those bound to slavery by other evil, invisible chains. We pray in Jesus’ Name. Amen 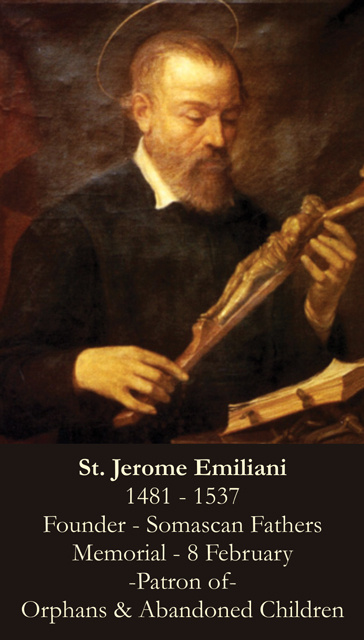 Jerome Emiliani (1486 – 8 February 1537) was an Italian humanitarian, founder of the Somaschi Fathers, and is considered a saint by the Catholic Church. Born in Venice, he spent some time in the military, and later served as a magistrate. Emiliani provided for the sick, the hungry, and orphans; and persuaded others to do likewise. Through his good offices a number of hospitals and orphanages were established in several northern Italian towns. He was canonized in 1767 and is the patron saint of orphans.

His father died when he was a teenager and Jerome ran away at the age of 15 to join the army. In 1508, he participated in the defense of Castelnuovo against the League of Cambray (this was two years before Pope Julius II joined the Venetians). He was appointed governor of a fortress in the mountains of Treviso, and while defending his post he was taken prisoner. He had not cared about God but he attributed his escape to the intercession of the Mother of God; and he made a pilgrimage to the shrine of Our Lady of Treviso, in fulfillment of a vow, leaving his chains as an offering.

He was then appointed podestà (Venetian magistrate) of Castelnuovo di Quero, but after a short time returned to Venice to supervise the education of his nephews. His spare time was devoted to the study of theology and to works of charity. In the year of plague and famine (1528), he seemed to be everywhere and showed his zeal, especially for the orphans, whose number had so greatly increased. Jerome began caring for the sick and feeding the hungry at his own expense. He rented a house for them near the church of St. Rose and, with the assistance of some pious laymen, ministered to their needs.

To his charge was also committed the hospital for incurables, founded by Saint Cajetan. In 1531 he went to Verona and induced the citizens to build a hospital; in Brescia, Bergamo, Milan and other places in northern Italy, he erected orphanages, for boys and for girls. At Bergamo, he also founded a hostel for repentant prostitutes. He was beatified by Pope Benedict XIV in 1747, and canonized by Pope Clement XIII on 16 July 1767. The Office and Mass in his honor were approved eight years later.

He was thus not included in the 1570 Tridentine Calendar. When inserted in the Roman Calendar in 1769, he was assigned the date of 20 July. In 1969, Pope Paul VI moved his feast to the day of his death, 8 February. The St. Gerolamo Emiliani Sanctuary is located in Somasca, Vercurago where a seventeenth century silver shrine contains his remains. In 1928, Pope Pius XI named him the patron of orphans and abandoned children.

God of mercy, you appointed Jerome Emiliani to be a patron of orphans. May his intercessory prayers keep us faithful to the Spirit we have received, by Whom we are given the status of your children. 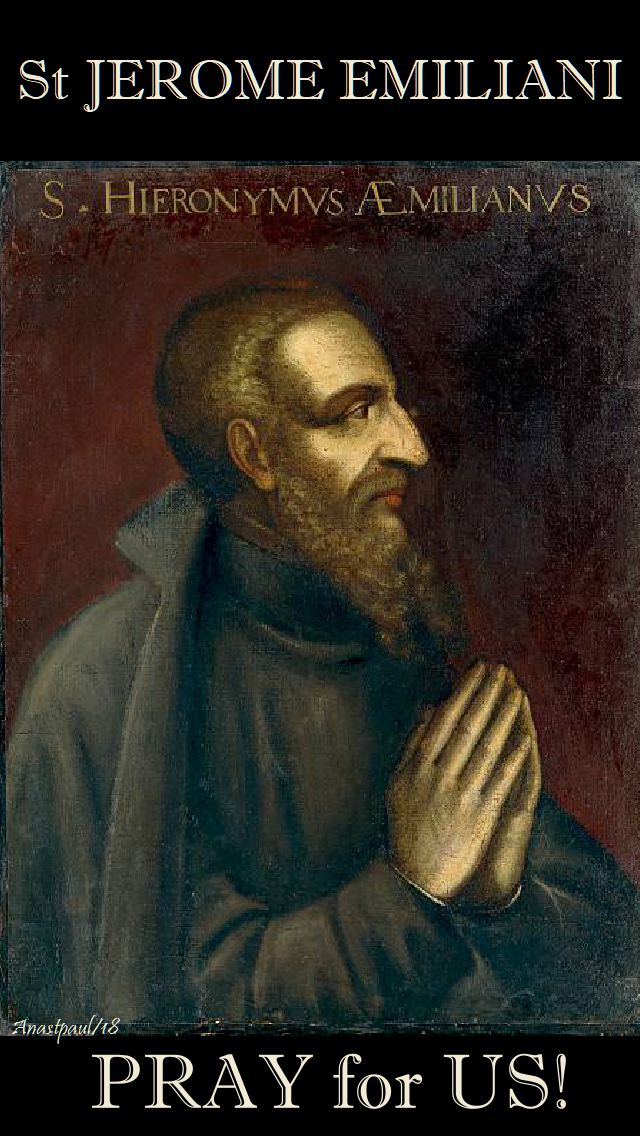 Saint Jerome Emiliani, pray for us.