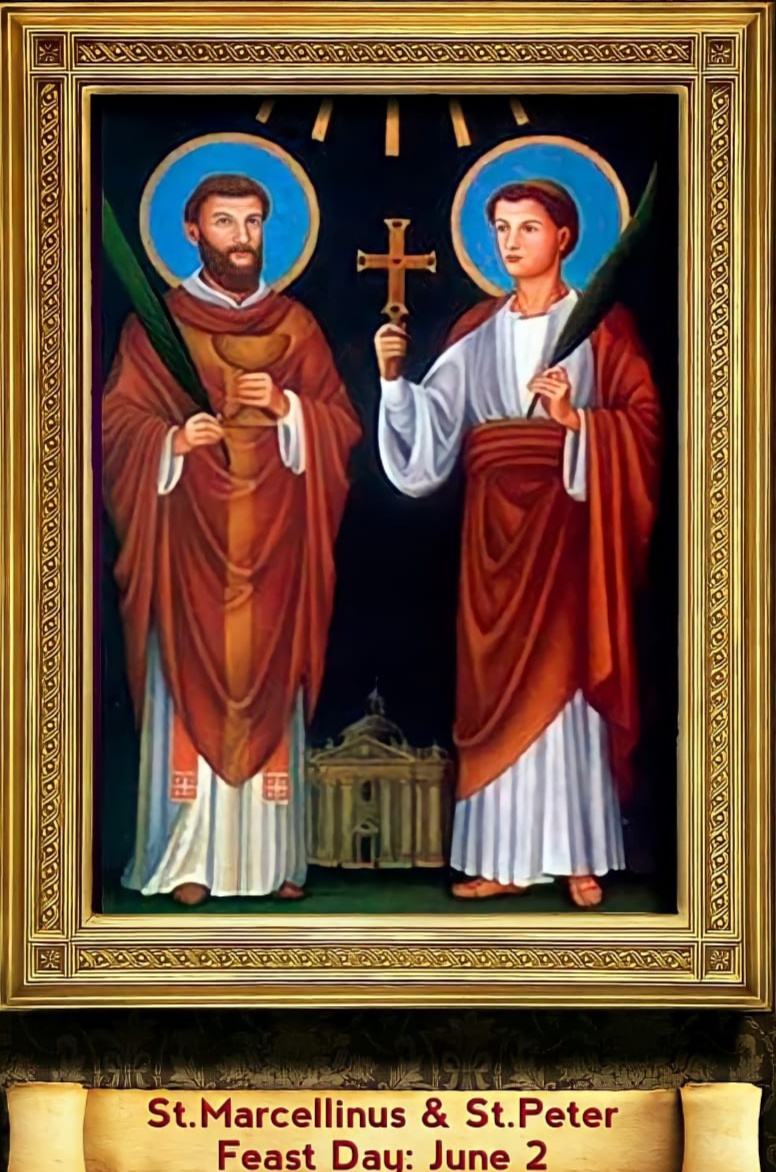 Saints Marcellinus and Peter (sometimes called Petrus Exorcista – Peter the Exorcist) are venerated within the Christian churches as martyrs who were beheaded. Hagiographies place them in 4th century Rome. They are generally represented as men in middle age, with tonsures and palms of martyrdom; sometimes they hold a crown each.

Saint Helen went to the Holy Land and returned to Rome with remnants of the true cross of Christ. This same Helen was the mother of Constantine, the Roman Emperor who legalized Christianity in 313 and who called the Council of Nicea in 325. When Saint Helen died around 328, her Emperor-Son placed her body in a monumental, sumptuous sarcophagus of rare, porphyry marble from Egypt.

The deeply carved red stone shows Roman soldiers on horseback conquering barbarians. It was probably meant to be Constantine’s own sarcophagus, but when his mother died, he used it for her. He also built a large church on the outskirts of Rome over the catacombs, or burial place, of today’s saints, Marcellinus and Peter, and placed his mother’s tomb inside the church.

That one as famous and powerful as Constantine would build a church over the catacombs of Marcellinus and Peter, and honor this church still more with his mother’s tomb, testifies to these martyrs’ importance to the early Christians of Rome. And since they were martyred in approximately 304, their memory must still have been fresh when Christianity was legalized.

Until this time, Christians worshipped in dark, hidden places. As they first stepped into the public light to build the ancient churches whose walls, pillars, and foundations are still visible today, these Christians honored those who came before them. They honored those whose deaths were all the sadder because they perished so close to the day of Christian liberation. They honored Saints Marcellinus and Peter.

Very little is known about the actual lives of these two men. Later hagiography suggests that Marcellinus, a priest, and Peter, an exorcist, died in the year 304, during the Diocletianic Persecution. Pope Damasus I claimed that he heard the story of these two martyrs from their executioner who went on to become a Christian. Damasus states that they were killed at an out-of-the-way spot by the magistrate Severus or Serenus.

This was done, that other Christians would not have a chance to bury and venerate their bodies. The two saints happily cleared the spot chosen for their death: a thicket overgrown with thorns, brambles, and briers three miles from Rome. They were beheaded and buried in that spot.

Two women, Lucilla and Firmina, assisted by divine revelation, found the bodies, however, and had them properly buried. They buried their bodies near the body of St.Tiburtius on the Via Labicana in what became known as the Catacombs of Marcellinus and Peter.

Around the 6th century, a passio connected the martyrdom of Marcellinus and Peter with that of the jailer Artemius, who was converted to Christianity by Marcellinus. Artemius’ wife Secunda (or Candida) and daughter Paulina were also converted. Artemius was beheaded; Secunda and Paulina were buried alive under a pile of stones.

The passio states that they were killed at the 12th milestone on the Via Aurelia in a place called Silva Candida. Their executioner, Dorotheus, was said to have been converted by Pope Julius I. Pope Damasus, who opened their catacombs, also remarks that he wrote a Latin epitaph with the details of their death with which he adorned their tomb.

The martyrs were venerated by the early Christian Church. Their sepulcher is mentioned in the Martyrologium Hieronymianum, which includes the information that Marcellinus was a priest and that Peter was an exorcist. In the Martyrologium, their feast day is given as 2 June and their sepulcher is described as being located ad duas lauros (“at the two laurel trees”) at the third mile of the Via Labicana.

From the 7th century onwards, their sepulcher became a site of pilgrimage, and their feast day is recorded in local liturgies and hagiographies. According to the Liber Pontificalis, Constantine the Great built a basilica in their honor, since a structure built by Damasus had been destroyed by the Goths. 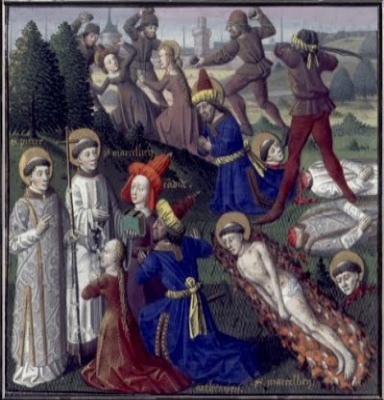 The catacombs and the first Basilica of Marcellinus and Peter fell into ruins at the hands of two enemies—time and the Goths. A “new” church was built nearby to replace it and is still a parish. Saint Helen’s bones were removed from her imperial tomb in the twelfth century and swapped with the body of a Pope.

The tomb was later emptied again and, in 1777, moved to the Vatican museums. Hundreds of thousands of tourists walk right by the tomb every year, seeing perhaps just a huge chunk of marble, oblivious to the rich history connecting the monumental tomb to ancient Christianity and the martyrs we commemorate today.

The names of Sts. Marcellinus and Peter appeared in the Ambrosian liturgy. Their names are mentioned in the Roman Canon. In 1253 Pope Alexander IV translated their relics to an ancient church (its presence was first mentioned in 595 AD) near the present-day Via Merulana that was named after them: Santi Marcellino e Pietro.

Relics associated with Marcellinus and Peter were translated to Seligenstadt in Germany in the 9th century. They were sent by Pope Gregory IV to Einhard, secretary to Charlemagne. Einhard sent them to Strasburg, then to Michlenstad and afterwards to Malinheim. In 829, Einhard built a church in honor of Marcellinus and Peter, and became its first abbot.

A slightly different account states that Einhard had built a basilica at Michelstadt in 827 and then sent a servant, Ratleic, to Rome with an end to find relics for the new building. Once in Rome, Ratleic, with the help of a Roman deacon with a reputation as a relics-swindler and thief named Deusdona, robbed a catacomb of the bones of Marcellinus and Peter and had them translated to Michelstadt.

Once there, the relics made it known they were unhappy with their new tomb and thus had to be moved again to Mulinheim (now Seligenstadt). Once established there, they proved to be miracle workers. Agostino Amore believes that the entire translation was fraudulent, due to Deusdona’s reputation. Cremona Cathedral in Italy also claims to have relics, inside a sarcophagus in one of its transepts.

Saints Marcellinus and Peter, staying true to the faith at the cost of your lives, help all those who seek and pray for your intercession to combat persecution and of any kind, with bravery and heroic resistance. 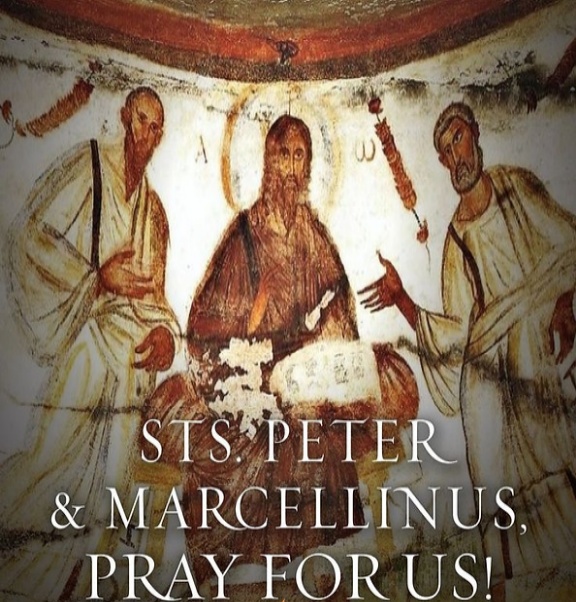 Saints Marcellinus and Peter, pray for us.