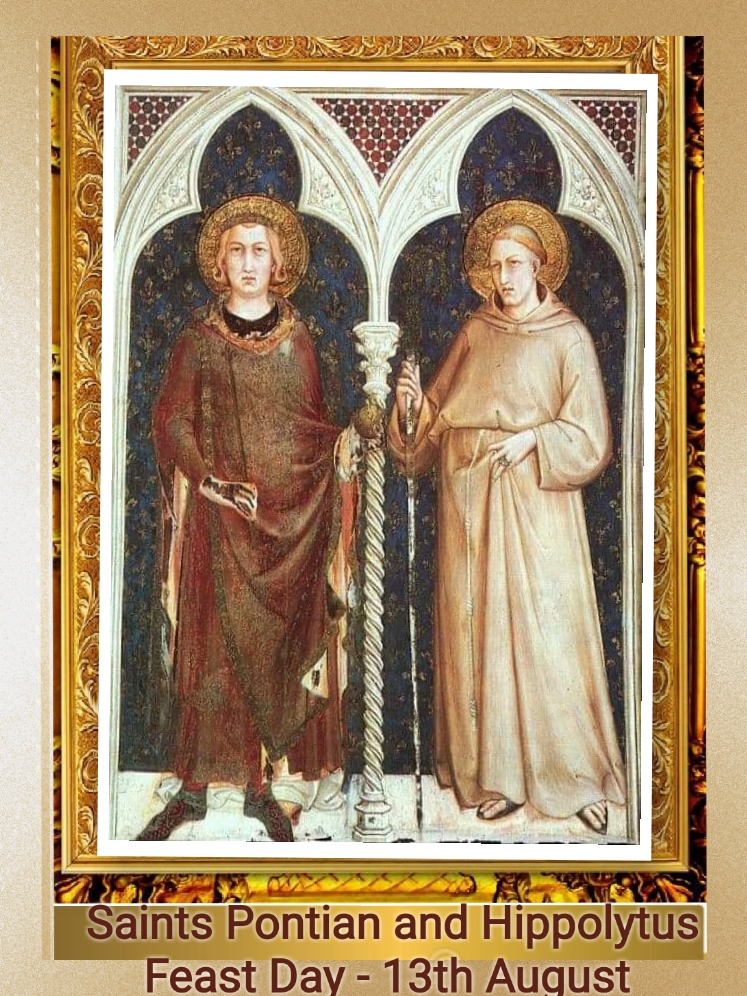 Pope Pontian (died October 235) was the bishop of Rome from 21 July 230 to 28 September 235. In 235, during the persecution of Christians in the reign of the Emperor Maximinus Thrax, Pontian was arrested and sent to the island of Sardinia. He abdicated to make the election of a new pope possible. When Pontian resigned on 28 September 235, he was the first pope to do so.

It allowed an orderly transition in the Church of Rome and so ended a schism that had existed in the Church for eighteen years. Some accounts say he was beaten to death only weeks after his arrival on Sardinia. A little more is known of Pontian than his predecessors, apparently from a lost papal chronicle that was available to the compiler of the Liberian Catalogue of the bishops of Rome, written in the fourth century.

The Liber Pontificalis states that he was a Roman citizen and that his father’s name was Calpurnius. Early Church historian Eusebius wrote that his pontificate lasted six years. Pontian’s pontificate was initially relatively peaceful under the reign of the tolerant Emperor Severus Alexander. 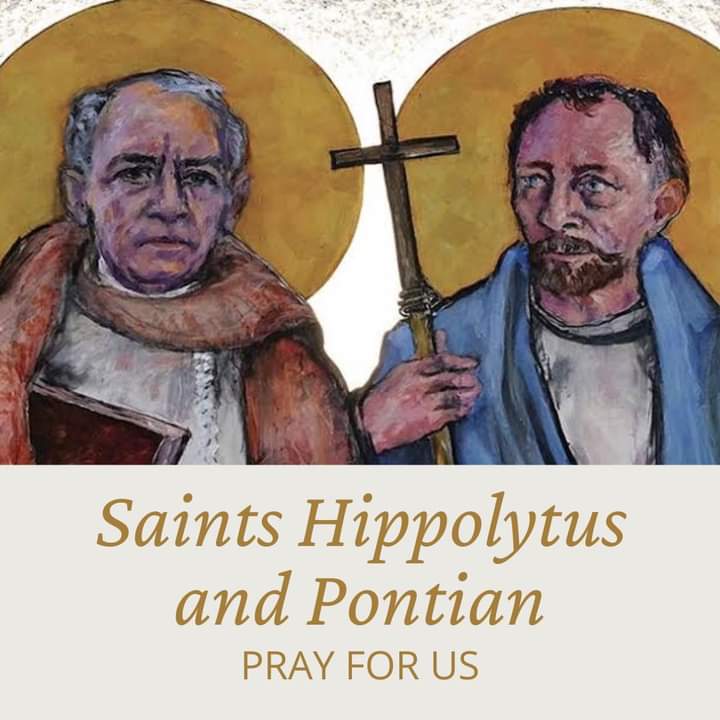 He presided over the Roman synod which approved Origen’s expulsion and deposition by Pope Demetrius I of Alexandria in 230 or 231. According to Eusebius, the next emperor, Maximinus, overturned his predecessor’s policy of tolerance towards Christianity. Both Pope Pontian and the Antipope Hippolytus of Rome were arrested and exiled to labor in the mines of Sardinia, generally regarded as a death sentence.

In light of his sentence, Pontian resigned, the first pope to do so, so as to allow an orderly transition in the Church of Rome, on 28 September 235. This date was recorded in the Liberian Catalogue and is notable for being the first full date of a papal reign given by contemporaries. This action ended a schism that had existed in the Church for eighteen years. Pontian was beaten to death with sticks.

Pope Saint Pontian was consecrated Bishop of Rome in 230. He is chiefly known for convening a Roman Synod which confirmed a prior condemnation of the Egyptian theologian Origen. Like so many other bishops of his era, Pontian also dealt with divergent positions over how the Church should re-integrate Christians who had abjured their faith during a persecution. Should they be re-baptized, do public penance, or be welcomed back privately… 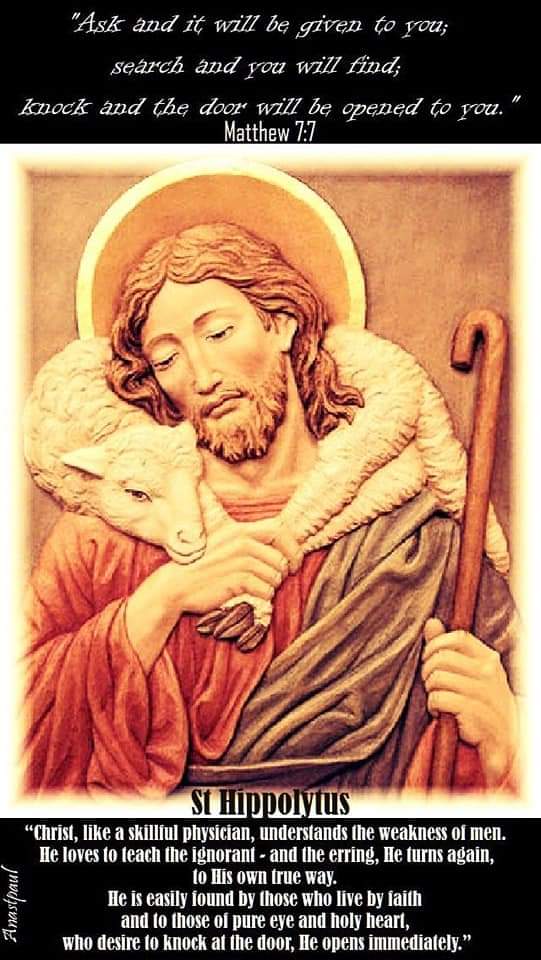 Tensions over this issue perdured for many decades and deeply wounded Church unity. During a persecution, Pontian was exiled, but first graciously resigned in 235 so that a successor pope could be elected. For this magnanimous act, he was remembered as “distinguished” in contemporary documents.

Saint Hippolytus was most likely from Rome. Some traditions, however, state he was from Lyon and was a disciple of Saint Irenaeus. Incredibly for a saint, Hippolytus is also traditionally labeled an anti-pope for resisting Pope Callixtus’ lenient attitude in reintegrating to Church life the lapsi who had rendered homage to false gods. Hippolytus was later reconciled to the Church which he loved enough to disrupt.

Besides being a controversialist, Hippolytus was the most impactful theologian in Rome before the legalization of Christianity. When the great theologian Origen came to Rome from Casarea, he heard Hippolytus preach. Most of Hippolytus’ works have been lost, but enough translated fragments of his original Greek writings survive to capture his importance.

He wrote on Scripture, dogma, law, apologetics, Christ, and also authored a comprehensive polemical work entitled A Refutation of All Heresies. Hippolytus is most famous as the author of the Apostolic Tradition, which preserves some of the most ancient liturgical texts of the primitive church. The original of the Apostolic Tradition does not exist, and later translated fragments are of dubious provenance, making the work a fluid, composite text of different eras.

Nevertheless, the core document is a one-of-a-kind artifact, allowing a modern Christian to peek through the keyhole into the liturgy of the early, praying Church. Hippolytus doesn’t just describe the words and actions of the liturgy, as the earlier Didache and Saint Justin Martyr did. Instead, he writes down the actual prayers. 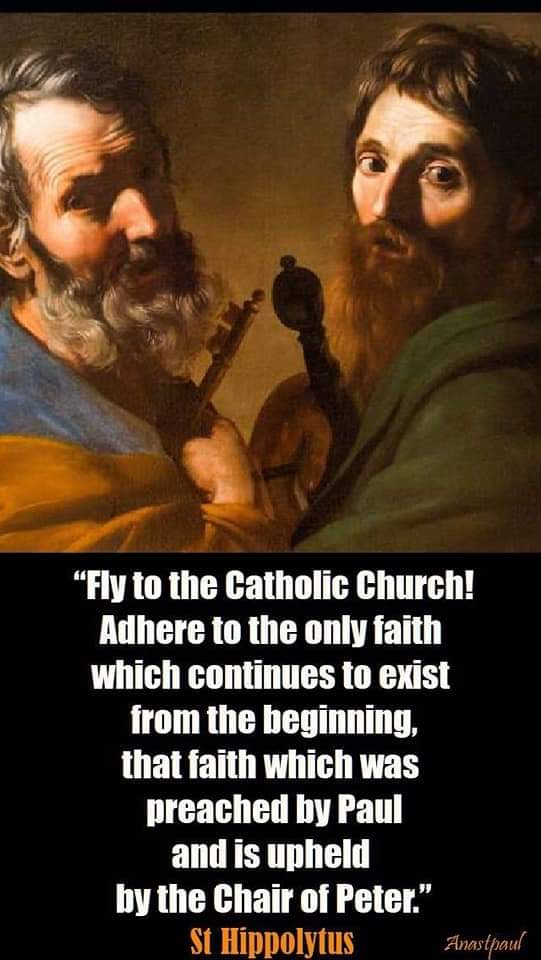 The Apostolic Tradition contains the earliest known rite of ordination. The ordination rite of a bishop used today by the Catholic Church still largely adopts this ancient text. Hippolytus provides the first example of the Virgin Mary being invoked in liturgical prayer. And Hippolytus’ prayers for the Eucharistic banquet include the third century words of consecration!

This text is the source for a significant portion of today’s Eucharistic Prayer II, perhaps the most commonly used Eucharistic prayer at Mass. When the faithful throughout the world hear the familiar cadence of Eucharistic Prayer II each Sunday, they are hearing the distant echo of priestly voices from the third century.

Neither Hippolytus nor Pontian survived, possibly reconciling with one another there or in Rome before their deaths. Pontian died in October 235. Pope Fabian had the bodies of both Pontian and Hippolytus brought back to Rome in 236 or 237, and the former buried in the papal crypt in the Catacomb of Callixtus on the Appian Way. The slab covering his tomb was discovered in 1909.

Saints Pontian and Hippolytus, you lived at a time of exiles, persecution and martyrdom, a most crucial period in the history of the Church. Yet, you proclaimed and gave public witness to your faith, leading to exile and death.

Your leadership of the Church led to your tragic ends. You were isolated, suffering for lack of essentials and died as a result. May we realize the extent of the hardships you endured for Christ’s sake, thus helping us gain courage when under duress, in Jesus’ Name. Amen 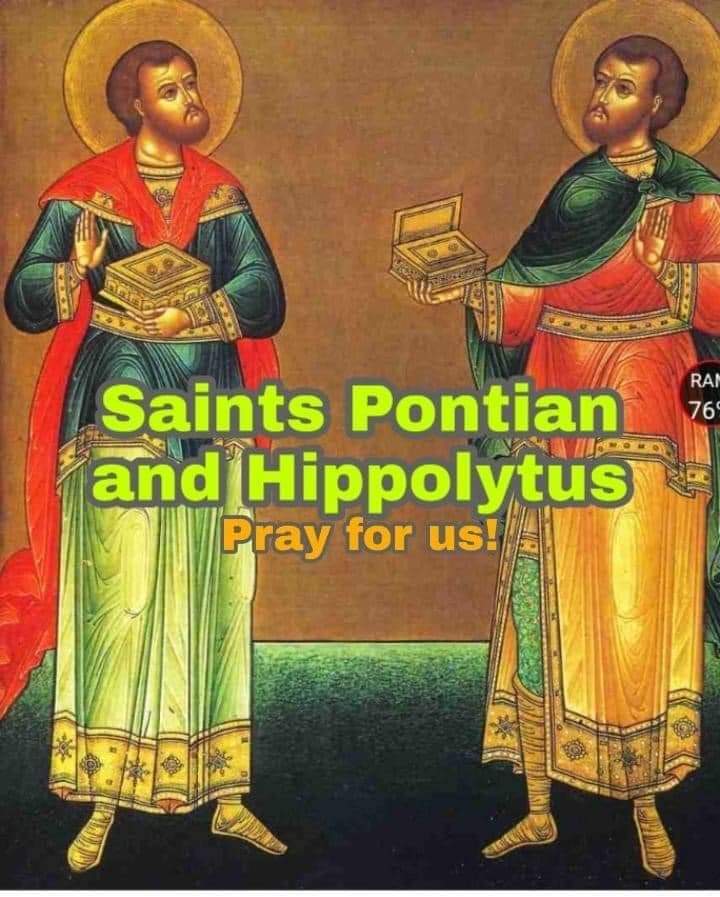