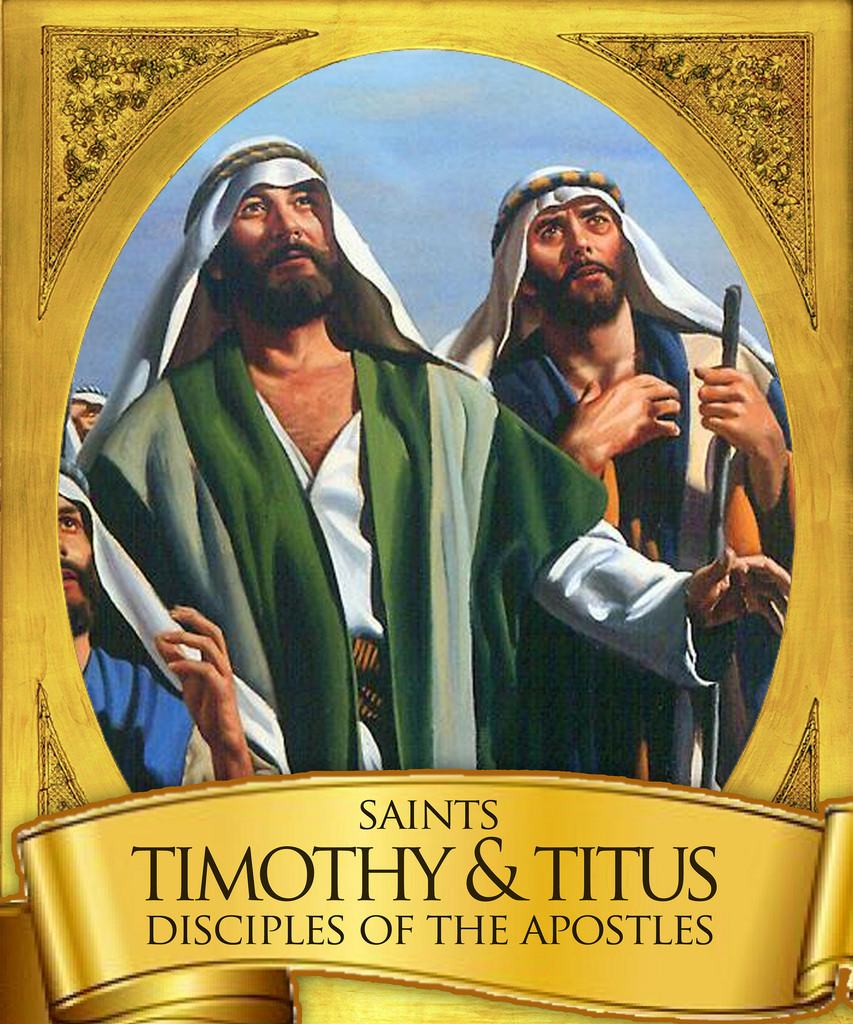 Saint Timothy was an early Christian evangelist and the first Christian bishop of Ephesus, who tradition relates died around the year AD 97. He was a native of Lystra or of Derbe in Lycaonia. When Paul and Barnabas first visited Lystra, Paul healed a person crippled from birth, leading many of the inhabitants to accept his teaching. When he returned a few years later with Silas, Timothy was already a respected member of the Christian congregation, as were his grandmother Lois and his mother Eunice, both Jews.

In 2 Timothy, his mother and grandmother are noted as eminent for their piety and faith. Timothy is said to have been acquainted with Scriptures since childhood. In 1 Corinthians 16:10, there is a suggestion that he was by nature reserved and meek. Timothy’s father was a Greek Gentile. Thus Timothy had not been circumcised and Paul now ensured that this was done, according to Acts 16:1-3 to ensure Timothy’s acceptability to the Jews whom they would be evangelizing.

Timothy became St Paul’s disciple, and later his constant companion and co-worker in preaching. In the year 52, Paul and Silas took Timothy along with them on their journey to Macedonia. Augustine extols his zeal and disinterestedness in immediately forsaking his country, his house, and his parents, to follow the apostle, to share in his poverty and sufferings. Timothy may have been subject to ill health or frequent ailments, and Paul encouraged him to “use a little wine for your stomach’s sake”.

When Paul went on to Athens, Silas and Timothy stayed for some time at Beroea and Thessalonica before joining Paul at Corinth. Timothy next appears in Acts during Paul’s stay in Ephesus (54–57), and in late 56 or early 57 Paul sent him forth to Macedonia with the aim that he would eventually arrive at Corinth. Timothy arrived at Corinth just after Paul’s letter, 1 Corinthians reached that city. He was with Paul in Corinth during the winter of 57–58 when Paul dispatched his Letter to the Romans. According to Acts 20:3-6, Timothy was with Paul in Macedonia just before Passover in 58; he left the city before Paul, going ahead of him to await Paul in Troas. In the year 64, Paul left Timothy at Ephesus, to govern that church.

His relationship with Paul was close. Timothy’s name appears as the co-author on 2 Corinthians, Philippians, Colossians, 1 Thessalonians, 2 Thessalonians, and Philemon. Paul wrote to the Philippians about Timothy, “I have no one like him.” When Paul was in prison and awaiting martyrdom, he summoned his faithful friend Timothy for a last farewell. That Timothy was jailed at least once during the period of the writing of the New Testament is implied by the writer of Hebrews mentioning Timothy’s release at the end of the epistle.

Although not stated in the Bible, other sources have records of the apostle’s death. The apocryphal Acts of Timothy states that in the year 97 AD, the 80-year-old bishop tried to halt a procession in honor of the goddess Diana by preaching the Gospel. The angry pagans beat him, dragged him through the streets, and stoned him to death. The General Roman Calendar venerates Timothy together with Titus by a memorial on 26 January, the day after the Feast of the Conversion of Saint Paul.

In the 4th century, the relics of Timothy were transferred from Ephesus to Constantinople and placed in the Church of the Holy Apostles near the tombs of Andrew and Luke. Later on in the 13th century, the relics seem to have been taken to Italy by a count returning from the crusades, and buried around 1239 in the Termoli Cathedral. The remains were re-discovered in 1945, during restoration works. Timothy is the patron invoked against stomach and intestinal disorders.

Known from New Testament allusions in Acts of the Apostles and the Pauline Letters, Titus was a Gentile convert whom Paul, in contrast to his expediency in Timothy’s case, refused to allow to be circumcised (Galatians 2) at Jerusalem when the Jewish-Christian party demanded this concession to religious tradition. He also appears in connection with the Corinthian church, where he was lauded by Paul.

Titus was specially entrusted with organizing the alms collection for poor Christians of Judaea and evidently acted as a commissioner of Paul at Corinth, where he replaced Timothy. According to 2 Timothy 4:10, he made a subsequent mission to Dalmatia, but The Letter of Paul to Titus, which contains the rule of episcopal life, implies that he superintended a zealous apostolate in Crete as Paul’s delegate. Later tradition made him bishop of Crete. In 1966 his head was returned from Venice, where it had been venerated at St. Mark’s since the 9th century, to the Church of St. Titus in Iráklion (Herakleion) in Crete.

Titus is said to have studied Greek philosophy and poetry in his early years. He seems to have been converted by Paul, whereupon he served as Paul’s secretary and interpreter. In the year 49, Titus accompanied Paul to the council held at Jerusalem, on the subject of the Mosaic rites. Towards the close of the year 56, Paul, as he himself departed from Asia, sent Titus from Ephesus to Corinth, with full commission to remedy the fallout precipitated by Timothy’s delivery of 1 Corinthians and Paul’s “Painful Visit”, particularly a significant personal offense and challenge to Paul’s authority by one unnamed individual.

During this journey, Titus served as the courier for what is commonly known as the “Severe Letter”, a Pauline missive that has been lost but is referred to in 2 Corinthians. After success on this mission, Titus journeyed north and met Paul in Macedonia. There the apostle, overjoyed by Titus’ success, wrote 2 Corinthians. Titus then returned to Corinth with a larger entourage, carrying 2 Corinthians with him. Paul joined Titus in Corinth later. From Corinth, Paul then sent Titus to organize the collections of alms for the Christians at Jerusalem. Titus was therefore a troubleshooter, peacemaker, administrator, and missionary.

Early church tradition holds that Paul, after his release from his first imprisonment in Rome, stopped at the island of Crete to preach. Due to the needs of other churches, requiring his presence elsewhere, he ordained his disciple Titus as bishop of that island, and left him to finish the work he had started. Chrysostom says that this is an indication of the esteem Paul held for Titus. Paul summoned Titus from Crete to join him at Nicopolis in Epirus. Later, Titus traveled to Dalmatia. The New Testament does not record his death.

It has been argued that the name “Titus” in 2 Corinthians and Galatians is nothing more than an informal name used by Timothy, implied already by the fact that even though both are said to be long-term close companions of Paul, they never appear in common scenes. The theory proposes that a number of passages—1 Cor. 4:17, 16.10; 2 Cor. 2:13, 7:6, 13–14, 12:18; and Acts 19.22—all refer to the same journey of a single individual, Titus-Timothy. Timothy seems to dispute this, by claiming that Titus has gone to Dalmatia. The fact that Paul made a point of circumcising Timothy but refused to circumcise Titus would indicate that they are different men, although certain manuscripts of Galatians have been taken (by Marius Victorinus, for example) to indicate that Paul did circumcise Titus.

In 1969, the Catholic Church assigned the feast to 26 January so as to celebrate the two disciples of Paul, Titus and Timothy, the day after the feast of the Conversion of St. Paul. The Evangelical Lutheran Church in America celebrates these two, together with Silas, on the same date while in the Church of England he is remembered (with Timothy) with a Lesser Festival on 26 January. His relics, now consisting of only his skull, are venerated in the Church of St. Titus, Heraklion, Crete, to which it was returned in 1966 after being removed to Venice during the Turkish occupation.

Titus is the patron saint of the United States Army Chaplain Corps. The Corps has established the Order of Titus Award, described by the Department of Defense. Both Timothy and Titus were worthy disciples and co-workers of St Paul. But Timothy, his companion, accompanied Paul on his travels. He was made head of the Church at Ephesus. Titus was Paul’s messenger to various Christian communities where disputes arose, and he was in charge of the Church at Crete. To these two loyal saints, Paul wrote his pastoral epistles.

God our Father, you gave your saints Timothy and Titus the courage and wisdom of the apostles. May their prayers help us to live holy lives and lead us to heaven, our true home.

Through our Lord Jesus Christ, Your Son, who lives and reigns with you in the unity of the Holy Spirit, God for ever and ever. Amen 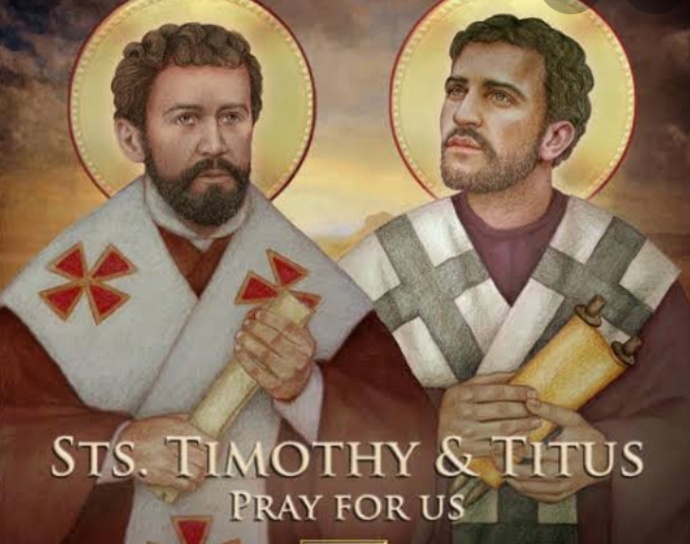 Saints Timothy and Titus, pray for us.