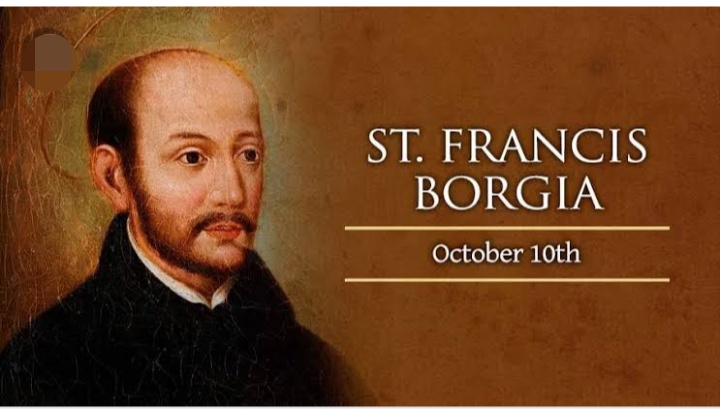 Francis Borgia, was a young nobleman at the court of the King of Spain. He was born in 1510 and was a great-grandson of Pope Alexander VI, a Grandee of Spain, a Spanish Jesuit, and third Superior General of the Society of Jesus. He became a Duke when he was only thirty-three and lived a happy, peaceful life with his wife Eleanor and their eight children. Francis was a perfect Christian gentleman, and his great joy was to receive Holy Communion. This happy life ended when his beloved wife died.

Francis did something that astonished all the nobles of Spain; he gave up his Dukedom to his son Charles and became a Jesuit priest. Many people came to his first Mass and they had to set up an altar outdoors, but his Superior tested him by treating him in exactly the opposite way he had been used to all his forty-one years of life.

He, who had once been a Duke, had to help the cook, carry wood for the fire and sweep the kitchen. When he served food to the priests and brothers, he had to kneel down in front of them all and beg them to forgive him for being so clumsy. Still he never once complained or grumbled. It was not too long before the humble priest accomplished wonderful works for God’s glory as he preached to all and advised many important people.

He spread the Society of Jesus all over Spain and in Portugal. When he was made Superior General of the Jesuits, he sent missionaries all over the world. Under his guidance, the Jesuits grew to be a very great help to the Church in many lands. In 1571, St. Francis returned to Spain for one last visit which drew huge crowds. He died in 1572, two days after his return to Rome.

St. Francis Borgia was beatified on November 23, 1624, by Pope Urban VIII, and canonized on June 20, 1670, by Pope Clement X. His feast is October 10. Many Catholics pray to him for protection from earthquakes, which is why he is called the patron saint against earthquakes.

Lord Jesus Christ, you lived life on earth as a humble being, dedicated to serve fellow humans, and taught us that the valuable way of your Cross was humility and service, dying to ourselves and living exemplary lives, in you, for others.

We beseech you, Lord, that as you made blessed Francis glorious by following you, in despising earthly honor, aid us also to become his companions alike in following you and living for God’s glory.
Who lives and reigns with the Father, in the unity of the Holy Spirit, one God, forevermore. Amen