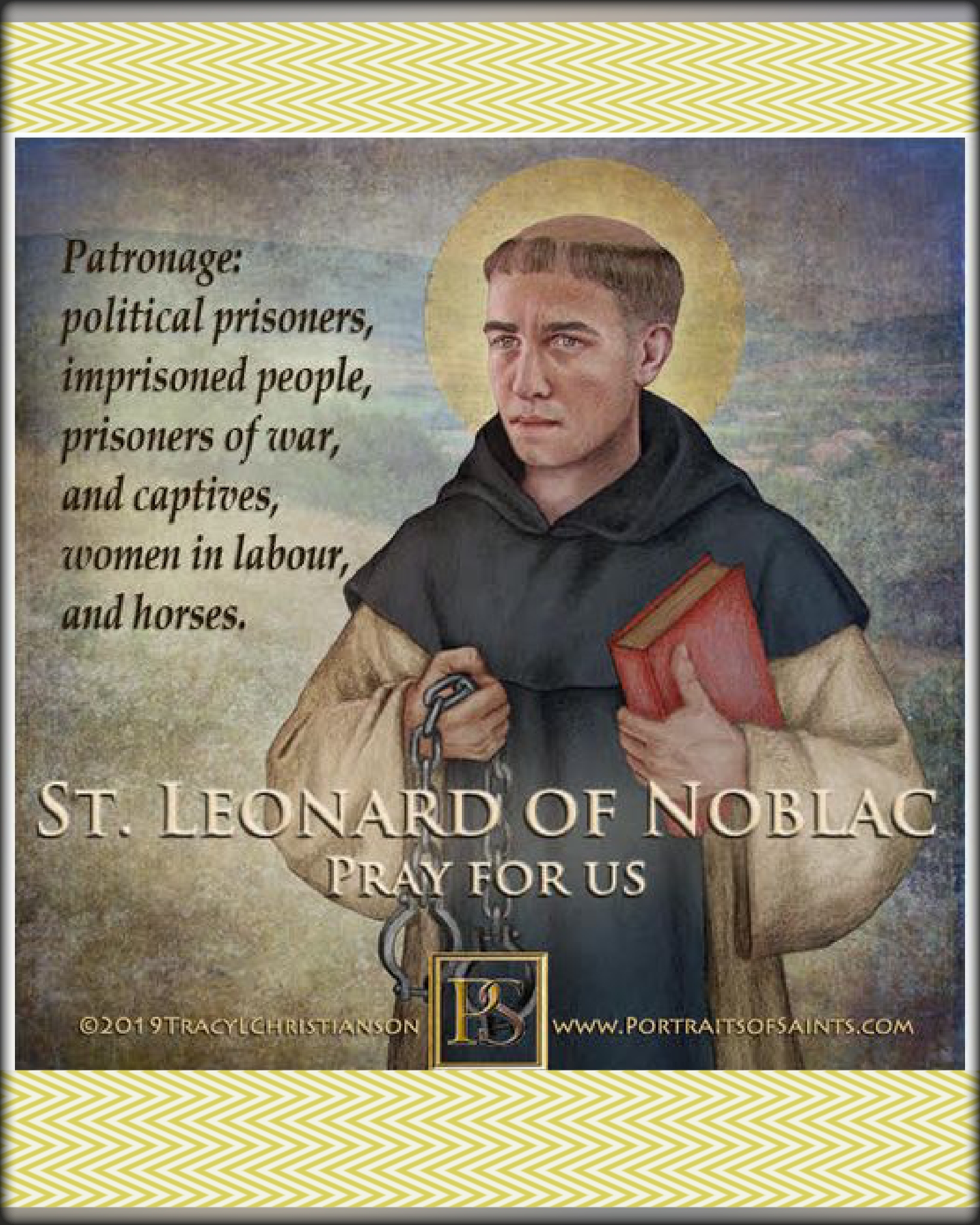 Today, November 6, we celebrate the feast day of Saint Leonard of Noblac. Leonard was born to noble and illustrious parents in Gaul (now France), in the castle of Vendome in Orleans. His relatives were dignitaries, military commanders, and people of both privilege and society. Leonard was baptized by future Saint Remigius, and the King, stood as sponsor for him.

While he was still very young, the kingdom was threatened by an invading army. The Queen, knowing of Leonard’s Christian faith, jokingly suggested that he invoke God’s assistance to repel the invading attack. Leonard prayed with fervour, and the tide of battle turned, and the armies of Gaul were victorious. Saint Remigius used this miracle to convert the King and thousands of followers to Christianity. Leonard began a life of austerity, sanctification, and preaching.

From an early age, Leonard was destined for service of the Lord. He was influenced by the holy examples of Saint Remigius, Archbishop of Rheims and renounced the world to lead a more perfect life. Looking to Saint Remigius for advice and spiritual guidance, Leonard quickly came to embrace the greatest of Christian virtues, living an exemplary life and adopting the tonsure (monk’s haircut) as a symbol to the world of his commitment to the Lord.

His brother, Saint Lifiard, followed his example and left the royal court, built a monastery at Meun, and lived there. Leonard, desiring further seclusion, withdrew into the forest of Limousin, converting many on the way, and living on herbs, wild fruits, and spring water. He built himself an oratory, leaving it only for journeys to churches.

Others begged to live with him and learn from him, and so a monastery was formed around his hermitage. Maximin, the abbot of the monastery, saw to it that Leonard was soon ordained a deacon, which office he accepted out of obedience. His first calling was in service to prisoners, who he showed great charity, and worked miracles of freedom, converting many.

King Clovis, in response to a prayer of Saint Remi, had issued an edict that prisoners in Rheims might be freed whenever his royal highness would pass through that city. Leonard requested the kind monarch to grant him the right to liberate prisoners whom he would find worthy. Based upon his exemplary life, prudence, and good judgment, the king readily agreed. Leonard earned himself a reputation of goodness, piety, and sanctity, becoming known to all. Many of his relatives, all royal personages, gave up their wealth and joined him and he encouraged their resolutions.

As a hermit, pilgrim and confessor, he devoted himself to caring for all he encountered, to their physical needs, also teaching them the virtues of patience and love, and instructing them in the ways of sound doctrine. The king, pleased with the reputation the holy man was earning, desired to attach him into his service, but Leonard preferred to live in humility and obscurity, as Christ had chosen for Himself for so many years. With the king’s permission, Leonard retired to a monastery in Orleans.

Saint Leonard fell ill while traveling, and as the end of his time on earth grew near, he miraculously had himself transported back to the Oratory of Our Lady, where he died. in 559,. Churches were dedicated to him in France, England, Belgium, Spain, Italy, Switzerland, Germany, Bohemia, Poland and other countries. Pilgrims flocked to his tomb, and in one small town in Bavaria there are records of 4,000 favors granted through Saint Leonard’s intercession. He is the Patron of Political prisoners, Prisoners, Women in labor, and horses and is depicted as an abbot holding chains, fetters or locks, or manacles.

O Almighty God, who hast called us to faith in thee, and hast encompassed us with so great a cloud of witnesses, grant that we, encouraged by the good examples of thy Saints, and especially of thy servant Leonard, may persevere in running the race that is set before us.

Help us emulate his virtuousness and humility, in service of our Christian brethren, until at length, through thy mercy, we with them attain to thine eternal joy. Through him who is the author and finisher of our faith, thy Son Jesus Christ our Lord. Amen. 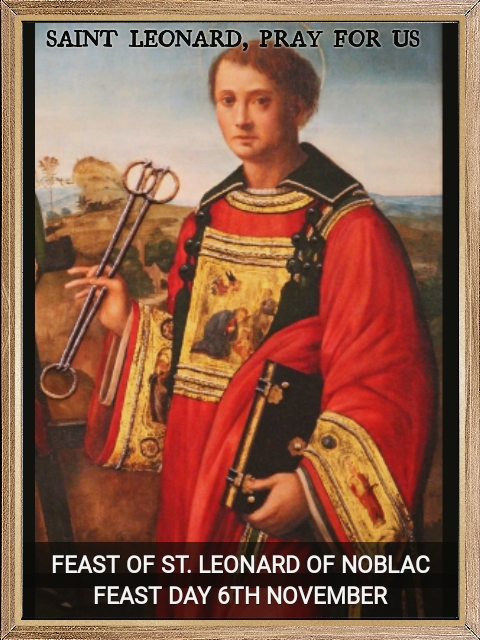 Saint Leonard of Noblac, pray for us.