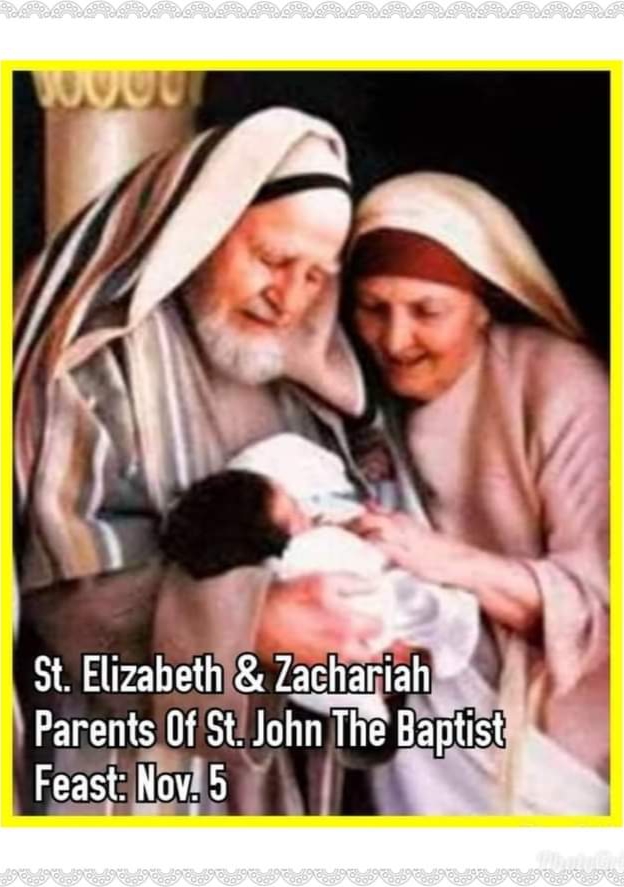 Elizabeth was the mother of John the Baptist and the wife of Zachariah, according to the Gospel of Luke. She was past normal child-bearing age when she gave birth to John. She was a cousin of Mary the Virgin Mother of our Savior Jesus Christ. The Gospel of Luke states that though Elizabeth was just, in the eyes of God, she was barren for most of her life. She was of quite advanced age when the Angel Gabriel appeared to her husband Zachariah in the temple to promise them a son.

St. Elizabeth is known for the words of the “Hail Mary,” which she uttered at feeling the child leap in her womb, as Mary, then pregnant with Jesus, came to visit her. The moment Mary arrived, Elizabeth recognized the blessing Mary had been given by God, and greeted Mary with these words: “Blessed are you among women, and blessed is the fruit of your womb!” (Luke 1:42). We say the same words when we pray the Hail Mary.

Zachariah was in the Temple when the angel Gabriel appeared announcing that Elizabeth would bear a son, who would be responsible for bringing many people back to God. When Zachariah doubted the angel’s revelation, asking for a sign, he was struck mute, and upon exiting the Temple, remained mute until John’s birth, when he wrote out John’s name. Zechariah’s first words were, “Blessed be the Lord!” (Luke 1:67). 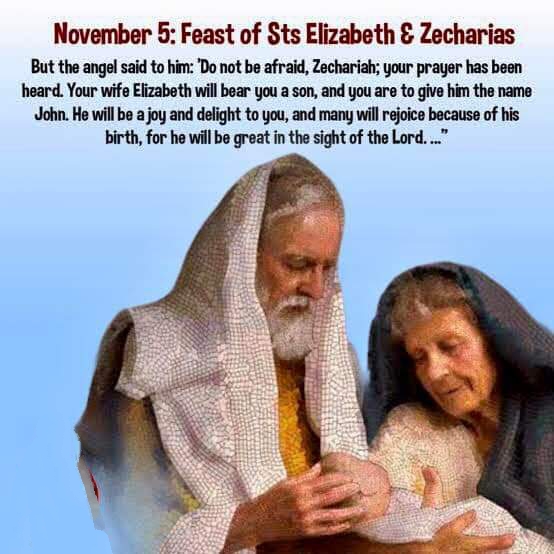 Blessed be the Lord, the God of Israel!
He has visited his people and redeemed them.

He has raised up for us a mighty saviour
In the house of David his servant,
As he promised by the lips of holy men,
Those who were his prophets from of old.

A saviour who would free us from our foes,
From the hands of all who hate us.
So his love for our fathers is fulfilled
And his holy covenant remembered.

He swore to Abraham our father to grant us,
that free from fear, and saved from the hands of our foes,
we might serve him in holiness and justice
all the days of our life in his presence.

As for you, little child,
you shall be called a prophet of God, the Most High.
You shall go ahead of the Lord
To prepare his ways before him.

To make known to his people their salvation
Through forgiveness of all their sins,

The loving-kindness of the heart of our God
Who visits us like the dawn from on high.

He will give light to those in darkness,
Those who dwell in the shadow of death,
And guide us into the way of peace.

Glory be to the Father and to the Son
and to the Holy Spirit,
as it was in the beginning, is now, and ever shall be, world without end. Amen 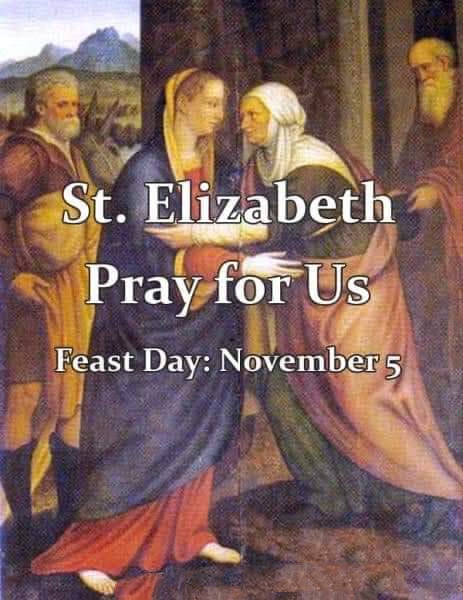 (Today is also the Feast of the Jesuit Saints and Blesseds)