FEAST OF THE CONVERSION OF SAINT PAUL, APOSTLE AND MARTYR – 25th JANUARY 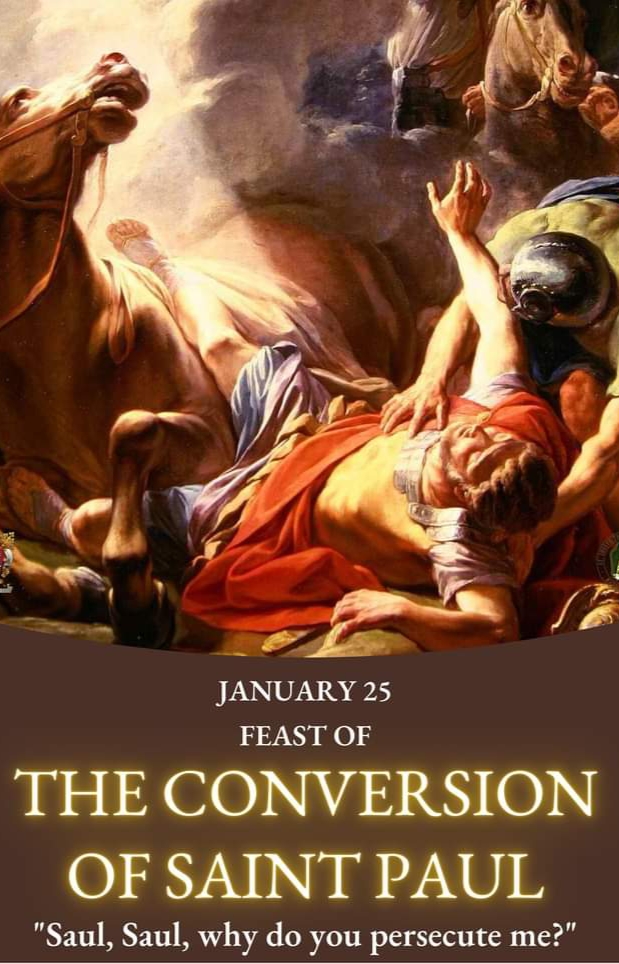 FEAST OF THE CONVERSION OF SAINT PAUL, THE APOSTLE AND MARTYR
FEAST DAY – 25th JANUARY 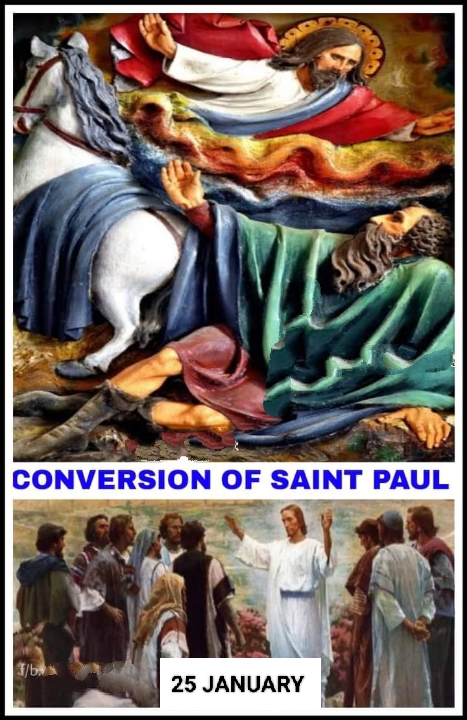 Paul, who was born Saul of Tarsus; c. 5 – c. 64/67 AD, commonly known as Paul the Apostle and Saint Paul, was a Christian apostle, though not one of the Twelve Apostles, who spread the teachings of Jesus in the first-century world. He is regarded as one of the most notable figures of the Apostolic Age. He preached the Holy Word, being commissioned by Jesus himself, and founded several Christian communities in Asia Minor and Europe from the mid-30s to the mid-50s AD.

St. Paul was born of Jewish parents who were descended from the tribe of Benjamin. He was a Roman citizen from birth, a pagan young man, at the stoning of Stephen, having been born around the beginning of the Christian era. To complete his schooling, St. Paul was sent to Jerusalem, where he learnt at the feet of the learned Gamaliel and was educated and bound in the strict observance of the ancestral Law. He also acquired a good knowledge of exegesis and was trained in the practice of disputation. 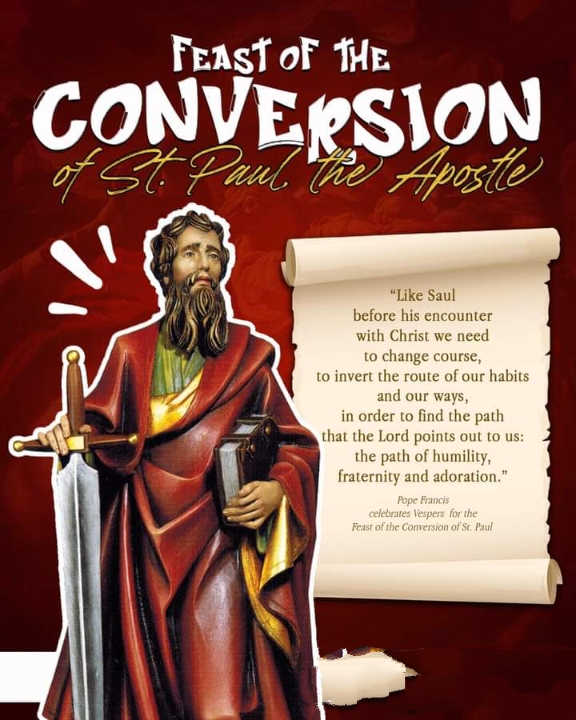 As a disciplined and zealous Pharisee, he returned to Tarsus before the public life of Christ opened in Palestine. Some time after the death of Jesus, Paul returned to Palestine. His profound conviction made his zeal develop to a religious fanaticism against the infant Church. He was a part of the opposition to Christians, one of those who stoned the first martyr, St. Stephen, and in the fierce persecution of the Christians that followed. Entrusted with a formal mission from the high priest, he departed for Damascus to arrest the Christians there and bring them bound to Jerusalem. As he was reaching Damascus, about noon, a light from heaven suddenly blazed around him.

Jesus, in his glorified, resurrected body, appeared to him and addressed him, turning him away from his apparently successful career and converting him to Christian discipleship. An immediate and absolute transformation was wrought in the soul of St. Paul, by which he was suddenly converted to the Christian Faith. He was baptized, and changing his name from Saul to Paul, he began travelling and preaching the Faith. He was martyred as an Apostle in Rome around 65 AD. 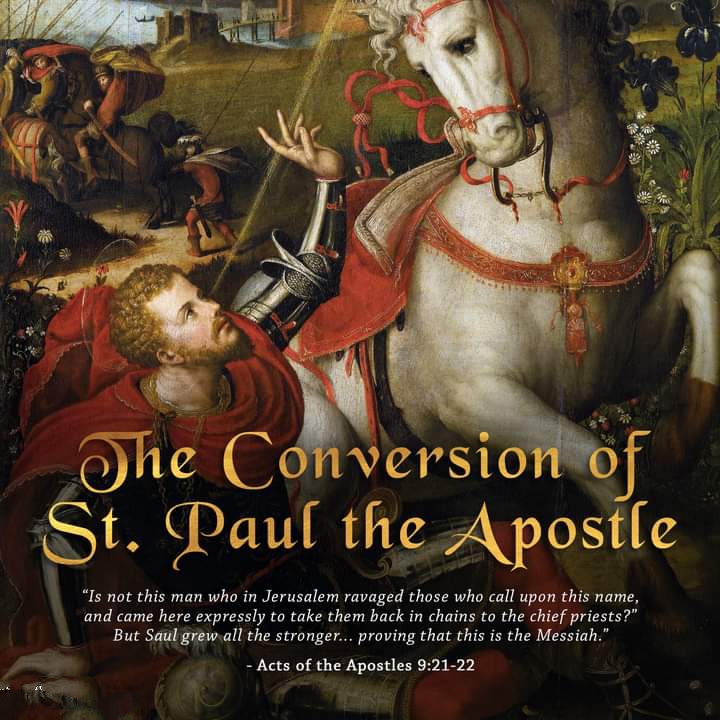 Our Blessed Lord prevented Saul with His grace, enlightened his understanding, moved his heart, and prepared his will to do all that was commanded him. In the very midst of his sinful career grace called to Saul to stop, and changed his heart so completely that the bitter enemy of Jesus Christ was transformed into an apostle, all aglow with love; and the persecutor of the Christian faith became its indefatigable defender and advocate. Thus St. Paul was able to say of himself: “By the grace of God I am what I am; and His grace in me hath not been void, but I have laboured more abundantly than they all: yet not I, but the grace of God with me” (1 Cor. 15:10).”

Thomas Aquinas sees Paul’s conversion as an example of a sudden grace of God, writing in his Summa Theologiae: Since a man cannot prepare himself for grace unless God prevent and move him to good, it is of no account whether anyone arrive at perfect preparation instantaneously, or step by step. 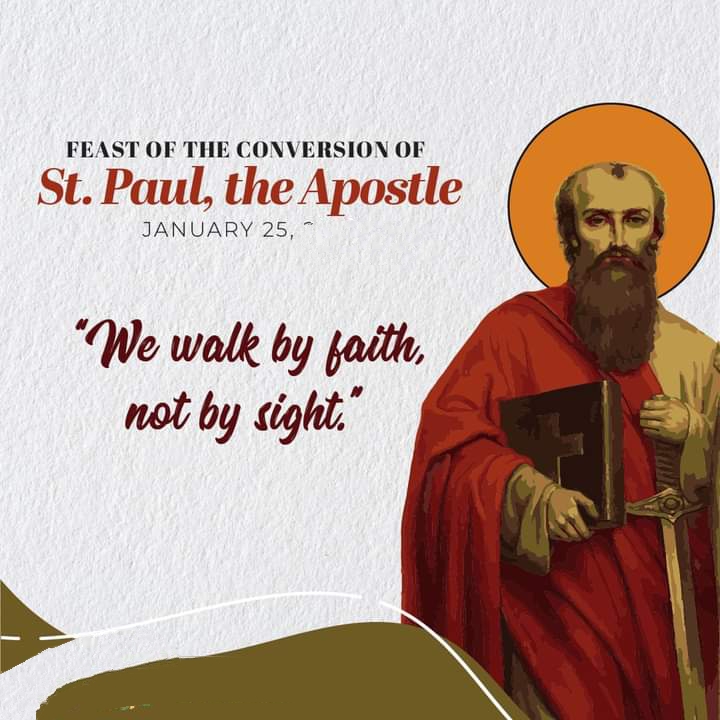 For it is written (Ecclus. 11:23): “It is easy in the eyes of God on a sudden to make the poor man rich.” Now it sometimes happens that God moves a man to good, but not perfect good, and this preparation precedes grace. But He sometimes moves him suddenly and perfectly to good, and man receives grace suddenly, according to Jn. 6:45: “Every one that hath heard of the Father, and hath learned, cometh to Me.” And thus it happened to Paul, since, suddenly when he was in the midst of sin, his heart was perfectly moved by God to hear, to learn, to come; and hence he received grace suddenly.

The Feast of the Conversion of Saint Paul the Apostle is a feast celebrated during the liturgical year on 25 January, recounting the conversion. This feast is celebrated in the Roman Catholic, Anglican and Lutheran churches. This feast is at the conclusion of the Week of Prayer for Christian Unity, an international Christian ecumenical observance that began in 1908, which is an octave (an eight-day observance) spanning from 18 January (observed in Anglican and Lutheran tradition as the Confession of Peter, and in the pre-1961 Roman Catholic Church as the feast of the Chair of Saint Peter at Rome) to 25 January. 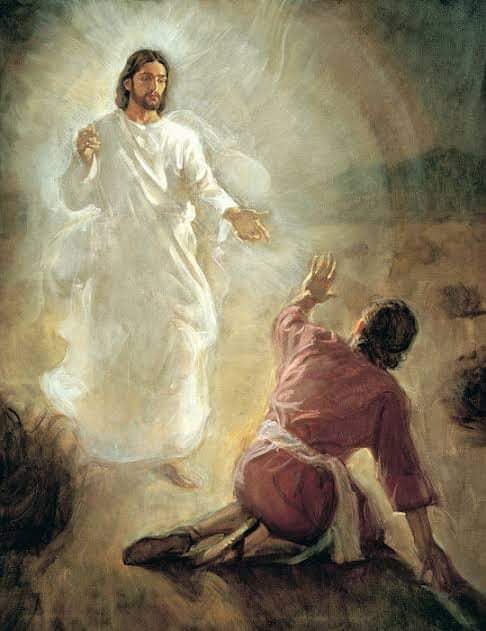 In rural England, the day functioned much like groundhog day does in the modern-day United States. Supposed prophecies ranged from fine days predicting good harvests, to clouds and mists signifying pestilence and war in the coming months. 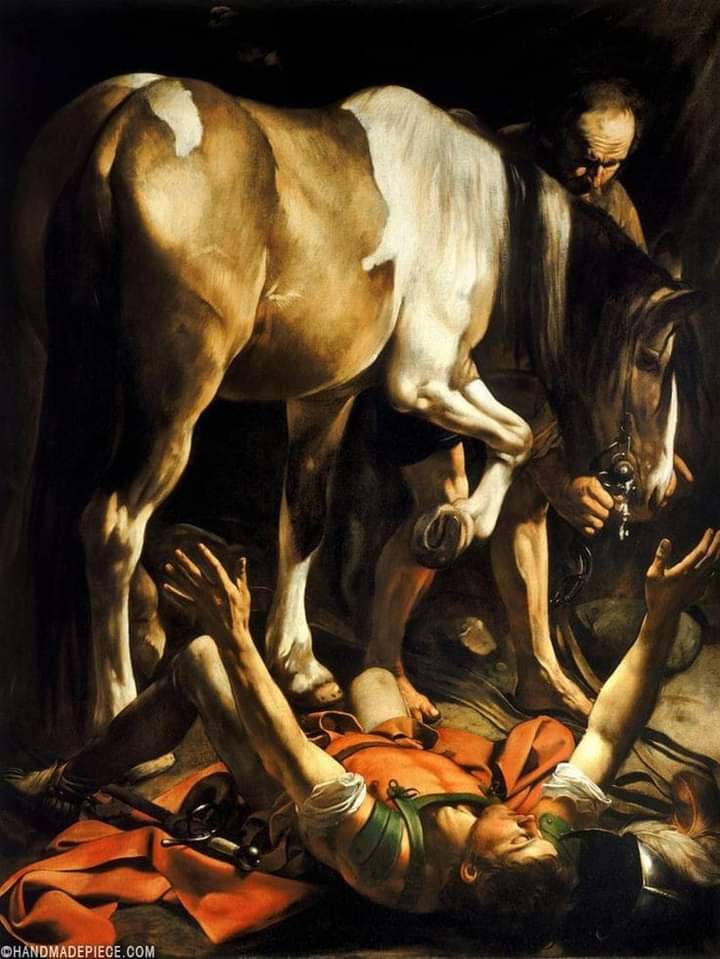 O God, who transformed the whole world through the valuable teaching and preaching of the blessed Apostle Paul, draw us, we implore, nearer to you, by emulation of the exemplary life of him whose conversion we celebrate today.

Make us witnesses to your truth in the world, through our Lord Jesus Christ, your Son, who lives and reigns with you in the unity of the Holy Spirit, one God, for ever and ever. Amen 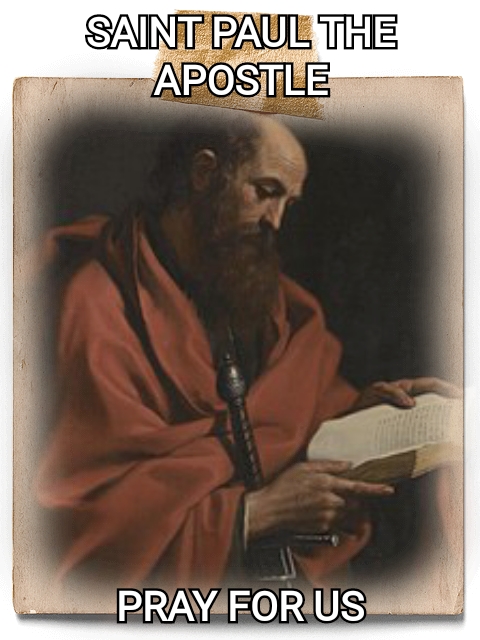 O Saint Paul, Apostle and Martyr, your teachings and writings, your life and example, have inspired all Christians down the centuries to know and worship the true God.

Help us in serving our Lord till the last breath of our lives, as fruitfully and courageously as you did, in Jesus our Lord. Amen