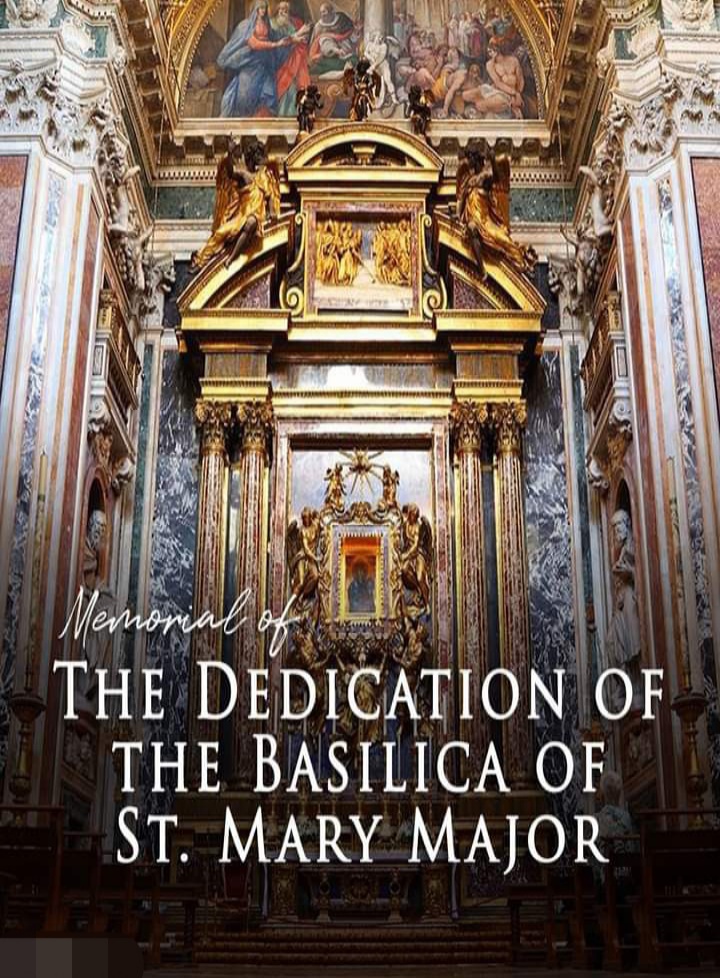 For the same reason the feast is also known popularly as Our Lady of the Snows. The reference to the legend was removed in the 1969 revision of the General Roman Calendar. Pope Pius V inserted this feast into the General Roman Calendar in 1568, when, in response to the request of the Council of Trent, he reformed the Roman Breviary. Before that, it had been celebrated at first only in the church itself and, beginning in the 14th century, in all the churches of the city of Rome.

Accordingly, it appears in the Tridentine Calendar for celebration as a Double. In Pope Clement VIII’s Missal of 1604, it was given the newly invented rank of Greater Double. In Pope John XXIII’s 1960 calendar, it became a Third-Class Feast. This 1960 calendar, included in the 1962 edition of the Roman Missal, is the calendar whose continued use privately and, under certain conditions, publicly is authorized by the motu proprio Summorum Pontificum.

Nine years later, the celebration became an optional memorial. The feast commemorates the dedication by Pope Sixtus III of the rebuilt Basilica di Santa Maria Maggiore just after the First Council of Ephesus. This major basilica, located on the summit of the Esquiline Hill in Rome, is called the Basilica of Santa Maria Maggiore (Latin: Basilica Sanctae Mariae Maioris) because it is the largest church in Rome dedicated to the Blessed Virgin Mary. 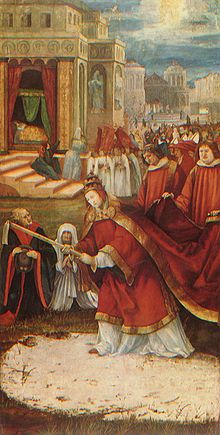 The original church, which was replaced by that of Pope Sixtus III, was built during the pontificate of Pope Liberius (352–366), and is thus sometimes known as the Basilica Liberii or Basilica Liberiana. Until 1969 the feast was known as Dedicatio Sanctae Mariae ad Nives (Dedication of the Church of Our Lady of the Snows), a name that had become popular for the Basilica in the 14th century in connection with a legend about its origin.

The Catholic Encyclopedia summarizes it thus: (in the middle of the 4th century) “During the pontificate of Liberius, the Roman patrician John and his wife, who were without heirs, made a vow to donate their possessions to the Virgin Mary. They prayed that she might make known to them how they were to dispose of their property in her honour. 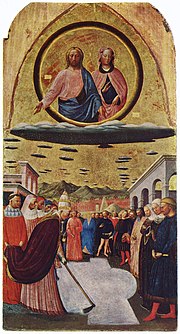 On 5 August, at the height of the Roman summer, snow fell during the night on the summit of the Esquiline Hill. In obedience to a vision of the Virgin Mary that they had the same night, the couple built a basilica in honour of Mary on the very spot that was covered with snow. From the fact that no mention whatever is made of this alleged miracle until a few hundred years later, not even by Sixtus III in his eight-line dedicatory inscription … it would seem that the legend has no historical basis.”

In fact there is no reference to the legend before the year 1000. The popularity of the legend in the 15th century is shown in the painting of the Miracle of the Snow by Masolino da Panicale of around 1423, now in the Museo di Capodimonte, Naples, in which the miracle is depicted as witnessed by a crowd of men and women, with Jesus and the Virgin Mary observing from above, and by the building in that century and the immediately following centuries of many churches dedicated to Our Lady of the Snows, of which 152 exist in Italy. 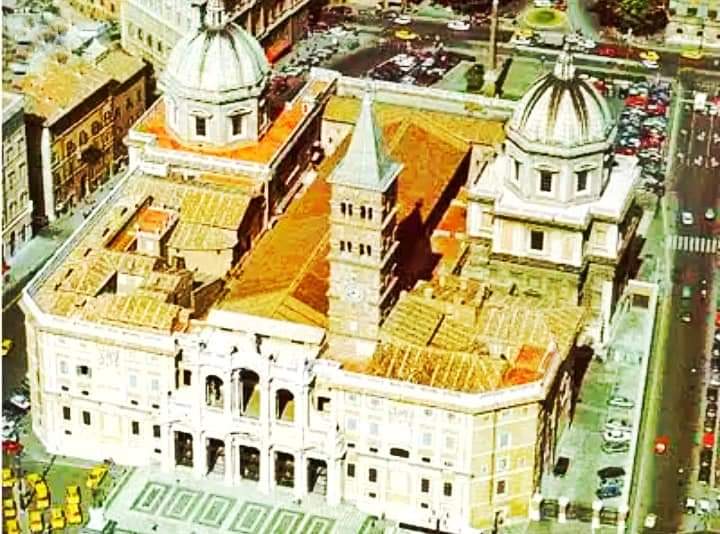 A more critical attitude began to prevail in the 18th century, as evidenced by the proposal that a congregation set up by Pope Benedict XIV presented to him in 1741 that the reading of the legend be removed from the Roman Breviary and that the original name, “Dedicatio Sanctae Mariae”, be restored. This recommendation was implemented only in 1969, 228 years later.

During the celebration of the liturgical feast of the Dedication of the Basilica of St. Mary Major, a custom that commemorates the story of the miraculous snowfall is still maintained: at the conclusion of the Solemn Mass in the basilica, a shower of white rose petals is dropped from the dome of the Chapel of Our Lady. 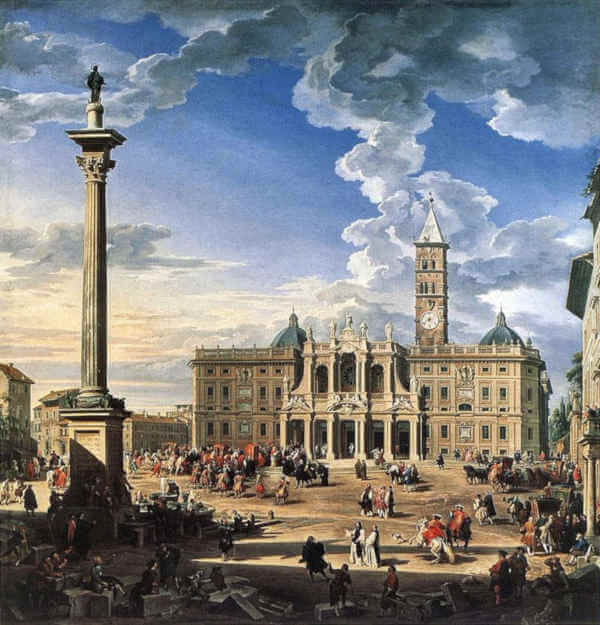 At sunset on the same day, an artificial “snowfall” is staged as a tourist attraction in the square outside the basilica. Apart from the chapel mentioned above, and many shrines of the Madonna della Neve in Italy, the United States has a “National Shrine of Our Lady of the Snows” in Belleville, Illinois, and parishes dedicated to “Our Lady of the Snows” are located in Reno, Nevada; Floral Park, New York, Milford, Michigan and Woodstock, Vermont.

In Croatia, Bol on the island of Brač as well as the parish church in Mamre on the island of Pag are dedicated to the Lady of the Snows. There’s also a dedicated temple on Calvary hill in Bratislava, Slovakia as well as in Marsaxlokk Malta – Kostol Panny Márie Snežnej and also the Parish of the Transfiguration of our Lord in Cavinti, Laguna which is their Secondary Patroness. 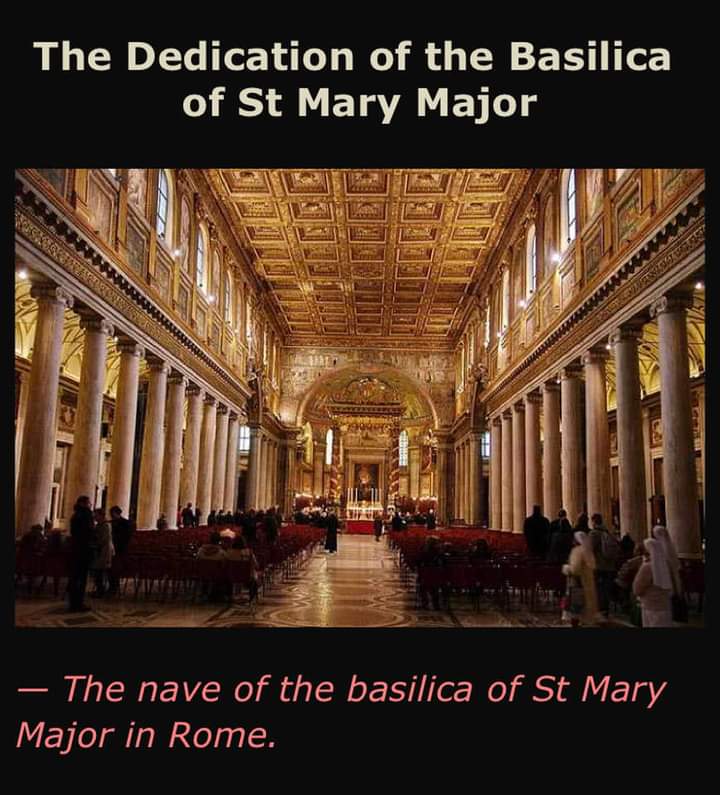 The Liberian basilica was rebuilt by Pope Sixtus III shortly after the Council of Ephesus affirmed Mary’s title as Mother of God in 431. Rededicated at that time to the Mother of God, St. Mary Major is the largest church in the world honoring God through Mary. Standing atop one of Rome’s seven hills, the Esquiline, it has survived many restorations without losing its character as an early Roman basilica. Its interior retains three naves divided by colonnades in the style of Constantine’s era. Fifth-century mosaics on its walls testify to its antiquity.

St. Mary Major is one of the four Roman basilicas known as patriarchal churches in memory of the first centers of the Church. St. John Lateran represents Rome, the See of Peter; St. Paul Outside the Walls, the See of Alexandria, allegedly the see presided over by Mark; St. Peter’s, the See of Constantinople; and St. Mary’s, the See of Antioch, where Mary is supposed to have spent most of her later life. 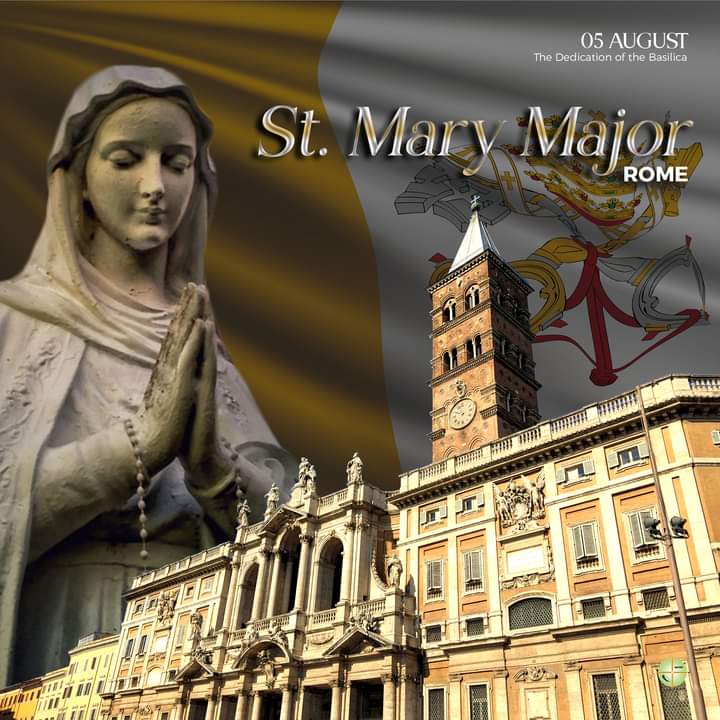 In the household of God’s family, in Heaven and on the earth, Mary loves us with a perfect mother’s love. Her love comforts and protects us on earth and her love will fill us with gladness, for ever, in Heaven, when, with her, we see Jesus, in the Glory of His Father and the Holy Spirit.

For all eternity, with the Most Blessed Virgin Mary, our spirits shall exult in the Lord God our Saviour (Luke 1:47).

A religion’s hierarchy of truths should be expressed, in a confident and certain manner, by the structure where that religion’s faithful gather to worship God. One should understand with the eyes. It is not for the Catholic to “shiver in the barn of the Reformation,” as one theologian wrote, and to guess what the building is trying to say. 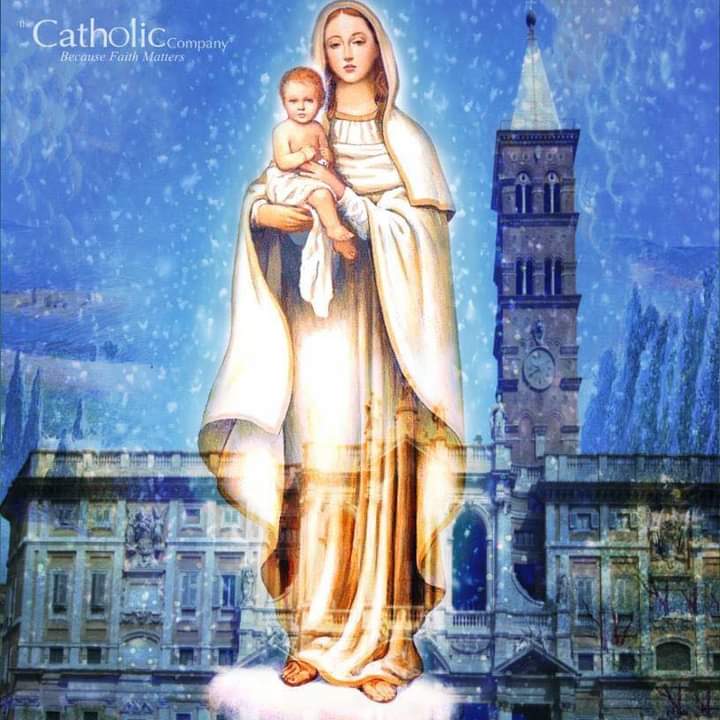 If God himself were to pull open the immense doors of St. Mary Major, one imagines He would walk down the central nave, look to his His right and to His left, smile, and slowly nod His head in pleasure and agreement. There, in an ornate chapel to the right, is Pope Saint Pius V. “How well he guided the rudder of my ship on earth.”

There, under the altar, are the bones of Saint Jerome. “Oh cantankerous Jerome, you gave my Church the definitive text of my Word.” There, below the high altar, is a relic of the manger of Christ. “And there it all started. Resting in that wood, My Son brought the Old Testament to an end.” And on and on and on: saints, popes, the Virgin, the tabernacle, the confessionals, the Stations of the Cross. God the Father would not be a stranger in St. Mary Major. 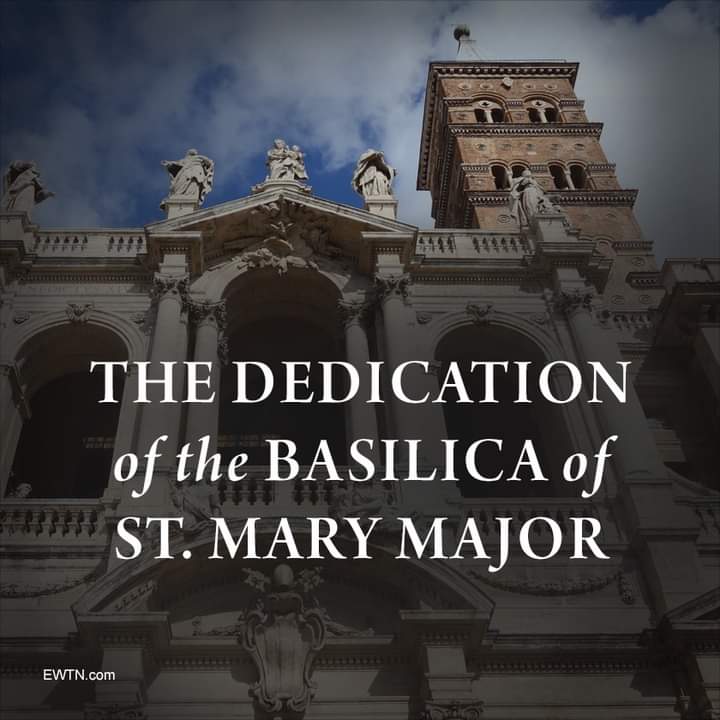 He would feel at home, surrounded by the things, signs, pictures, and emblems of the family life of the Universal Church. Rome is a small planet of art and beauty. The density of artistic treasures in St. Mary Major, and so many other Roman churches, exercises a gravitational pull drawing all those enamored with God and His beauty toward the sacred core of the eternal city

Pardon the faults of your servants, we pray, O Lord, that we, who cannot please you by our own deeds, may be saved through the intercession of the Mother of your Son and our Lord.

Holy Trinity, our worship of You is justice, in a Righteous God. We owe You reverence in the same way a child owes honor to his parents. Our love is rekindled by the sacred beauty of churches where You, Mary, and the saints are honored with such effusions of human genius. We pray that we continue to seek and proclaim the glory of God’s Kingdom.

Who lives and reigns with you in the unity of the Holy Spirit, God, for ever and ever. Amen

Our Lady of the Snows, pray for us.