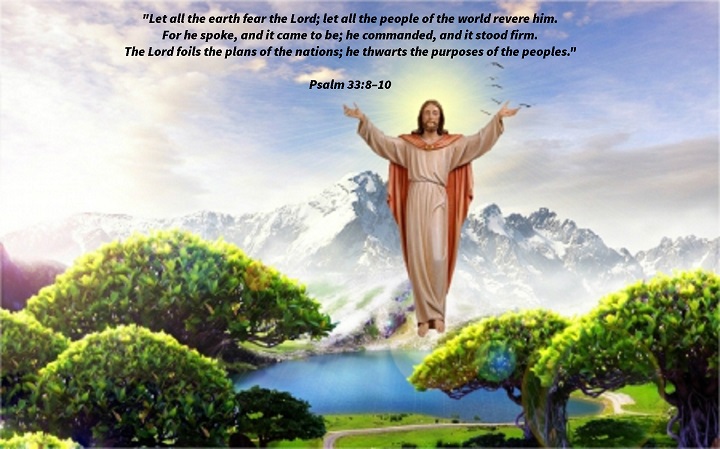 Let all the earth fear the Lord; all the people of the world revere him. For he spoke and it came to be; he commanded, and it stood firm. The Lord foils the plans of the nations; he thwarts the purposes of the peoples. Psalm 33:8–10

Oh Lord, Sovereign God, the Alpha and the Omega, all creation resounds with praising and exalting your Name and the choirs of angels along with the multitude of heavenly beings reverently sing melodies, telling of your mighty deeds, in awe of all they survey.

For when you spoke, the firmament formed, coming into being, along with the sun, moon, stars, planets and a billion galaxies, revolving according to the order and pattern ordained by you. All nature moves in accordance with your commands, in precision, and conforming in obedience to the plans you have designed.

You command the direction of the winds, the tides of the oceans, the coming and going of the seasons. You are Omniscient and chart the destinies, not just of man, but of the nations they occupy, right from their boundaries to their prosperity, confounding the intentions of humankind, to mold according to the patterns you have envisioned and charted out for them. Your Covenant and promises to your chosen people are true, everlasting, unchangeable and righteous.

Lead us through all the storms and distress of the world, manifesting your Might and Majesty in protecting and sheltering those who trust and repose full faith in you. May the Power of your Kingdom triumph against all the kingdoms of the world rising in rebellion against the purpose you have prepared for them and may your goodness extend to the ends of the earth, spreading its rays of Light and cutting through the darkness of evil dominions, in the Name of Jesus. Amen