This saint is the daughter of an even more famous woman-Saint Bridget (Birgitta) of Sweden. Catherine, who was born about 1330, was a married woman who, with her husband, took a vow of continence. She went to Rome in 1348, where her mother had gone after the death of Catherine’s father. Catherine’s husband died after she had been in Rome a short time.

For the next twenty-five years the two widowed women used that city as a base for pilgrimages to a variety of places, including Jerusalem. When not on pilgrimage, they spent their days in prayer and meditation and in working with the poor and instructing them in religion. This seemingly quiet life was not without perils and adventures.

Dissolute young lords repeatedly sought to seduce the Swedish princess, but God’s providence unfailingly thwarted their efforts. After the trip to Jerusalem, Bridget died, and Catherine took her mother’s body back to Sweden, burying it at Vadstena, in the convent of the Order of the Holy Savior, which Bridget had founded. Catherine became superior of the order and died on March 24, 1381, mourned by the whole of Sweden.

St. Catherine of Sweden was the fourth child of St. Bridget of Sweden and her husband, Ulf Gudmarsson. At the age of seven she was sent to the abbess of the convent of Riseberg and placed under her care to receive an education and to build a foundation for her spiritual life. Catherine soon showed, like her mother, a desire for a life of self-mortification and devotion to spiritual things.

At the command of her father, when about thirteen or fourteen years old, she married a noble of German descent, Eggart von Kürnen. She at once persuaded her husband, who was a very religious man, to join her in a vow of chastity. Both lived in a state of virginity and devoted themselves to the exercise of Christian perfection and active charity.

In spite of her deep love for her husband, around the year 1349, after the death of her father, Catherine accompanied her mother on a pilgrimage to Rome to visit the relics of the Roman Martyrs. The two spent several years in Rome. Soon after her arrival in that city Catherine received news of the death of her husband in Sweden. She now lived constantly with her mother, and took an active part in her fruitful labors.

Catherine zealously imitated her mother’s ascetic life. Although the distinguished and beautiful young widow was surrounded by suitors, she steadily refused all offers of marriage. In 1372 St. Catherine and her brother, Birger, accompanied their mother on a pilgrimage to the Holy Land; after their return to Rome St. Catherine was with her mother in her last illness and death.

In 1374, in obedience to St. Bridget’s wish, Catherine brought back her mother’s body to Sweden for burial at Wadstena, of which foundation she now became the head. It was the mother-house of the Brigittine Order, also called the Order of St. Savior. Catherine managed the convent with great skill and made the life there one in harmony with the principles laid down by its founder.

When this sorrowful division appeared she showed herself, like St. Catherine of Siena, a steadfast adherent of the party of the Roman Pope, Urban VI, in whose favor she testified before a judicial commission. Catherine stayed five years in Italy and then returned home, bearing a special letter of commendation from the pope. During the final 25 years of her life, Catherine was known for her austere lifestyle and her practice of making daily use of the Sacrament of Confession.

Catherine worked with the poor by teaching them life skills and religion. She followed her mother’s example to love and guide others by counseling women who had suffered a miscarriage or illness during their pregnancy. Not long after her arrival in Sweden she was taken ill and died. In 1484 Innocent VIII gave permission for her veneration as a saint.

Catherine wrote a devotional work entitled “Consolation of the Soul” (Sielinna Troest), largely composed of citations from the Scriptures and from early religious books; no copy is known to exist. Generally St. Catherine of Sweden is represented with a hind at her side, which is said to have come to her aid when unchaste youths sought to ensnare her. She is patron against abortions and against miscarriages.

Lord God, You showered heavenly gifts on St. Catherine the Virgin. Help us to imitate her virtues during our earthly life and enjoy eternal happiness with her in heaven. Amen 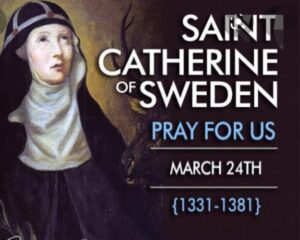 Dear Saint Catherine, patron of those who have suffered a miscarriage, the dangers that await unborn infants is well-known to you. May mothers avoid miscarriage and bring forth healthy babies. Please intercede for all souls deprived of peace, who have forgotten what true happiness is.

Glorious Saint Catherine, hear our prayers and ask that God, in good time, grant mothers their prayer that their child may become a true child of God. Amen