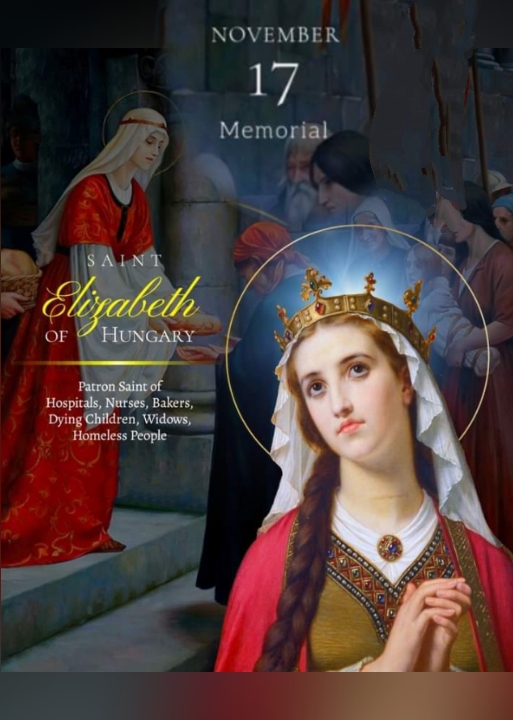 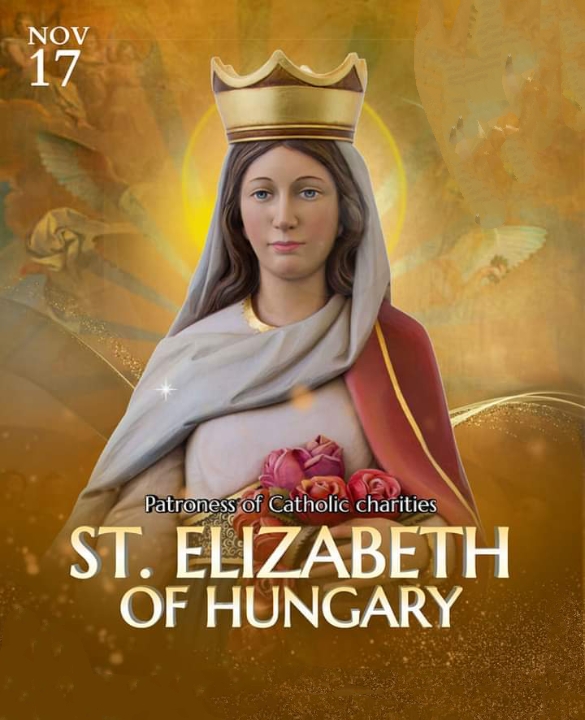 Elizabeth of Hungary, also known as Saint Elizabeth or Elisabeth of Thuringia, was a princess of the Kingdom of Hungary, Landgravine of Thuringia, Germany, and a greatly venerated Catholic saint who was an early member of the Third Order of St. Francis, by which she is honored as its patroness.

She was born in Hungary on July 7, 1207 to the Hungarian King Andrew II and Gertrude of Merania. Elizabeth’s mother, Gertrude, was murdered in 1213, when Elizabeth was just six-years-old. The murder was carried out by Hungarian noblemen because of the conflict between Germans and the Hungarian nobles. Elizabeth’s perspective on life and death dramatically changed after this and she sought peace with prayer. 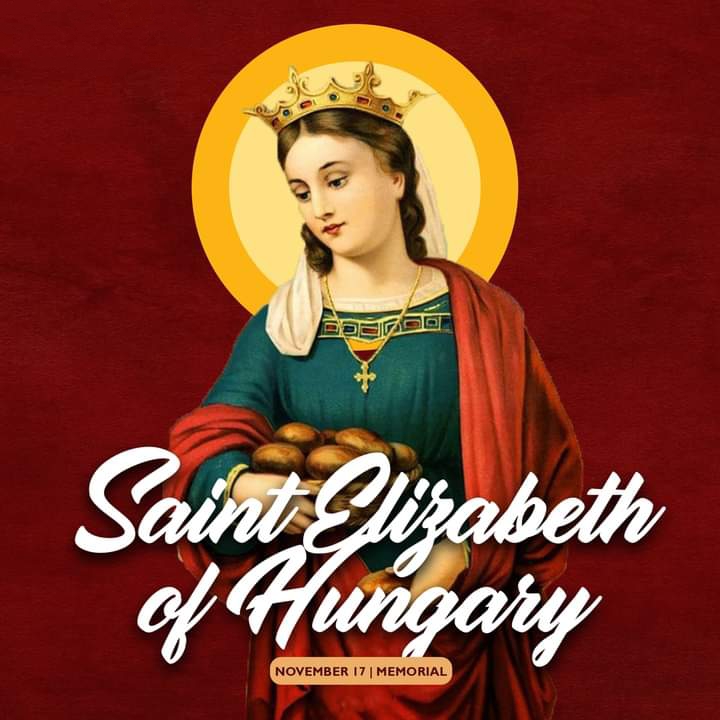 She was betrothed at the young age of 12, to Louis IV, son of Hermann I, of Thuringia, at whose court she was brought up. The marriage, which occurred when Louis succeeded his father in 1221, proved to be ideal but brief. She had three children. Louis died in 1227 of plague when he was in the Crusades.

In 1228, joining the Franciscan Order, under the spiritual direction of a Franciscan friar, she led a life of prayer, sacrifice, and service to the poor and sick. Seeking to become one with the poor, she wore simple clothing. Daily she would take bread to hundreds of the poorest in the land who came to her gate. No longer caring for position or wealth, she joined the Third Order of St. Francis, a lay Franciscan group. 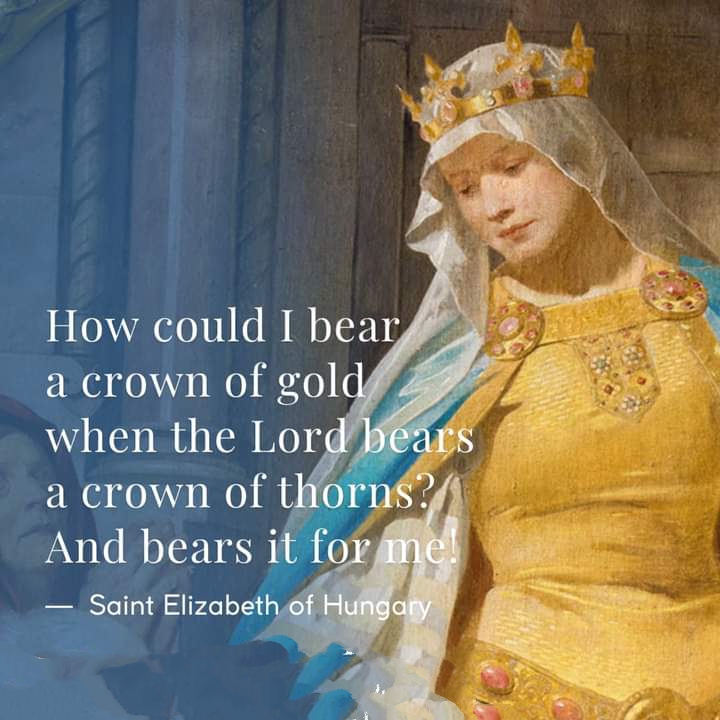 In her short life, Elizabeth displayed great love for the poor and suffering that she has become the patroness of Catholic charities and of the Secular Franciscan Order. Elizabeth chose a life of penance and asceticism when a life of leisure and luxury could easily have been hers. This choice endeared her in the hearts of the common people throughout Europe.

At Marburg she built a hospice for the poor and sick, to whose service she devoted the rest of her life. She put herself under the spiritual direction of Konrad von Marburg, an ascetic of incredible severity, who belonged to no specific order. She spent the remaining few years of her life caring for the poor in the hospital she had founded in honor of Saint Francis of Assisi. Elizabeth’s health declined, and she died before her 24th birthday in 1231. Her great popularity resulted in her canonization four years later. 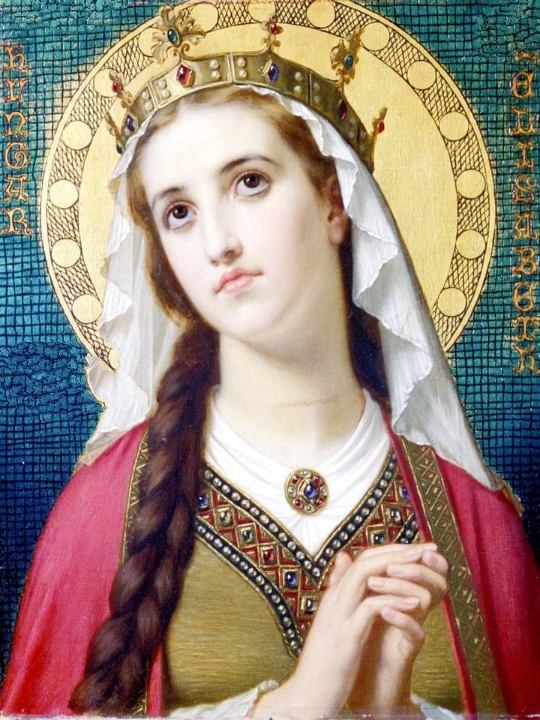 Among the best known legends about Elizabeth is the one often depicted in art showing her meeting her husband unexpectedly on one of her charitable errands; the loaves of bread she was carrying were miraculously changed into roses. This transformation convinced him of the worthiness of her kind endeavours, about which he had been chiding her. 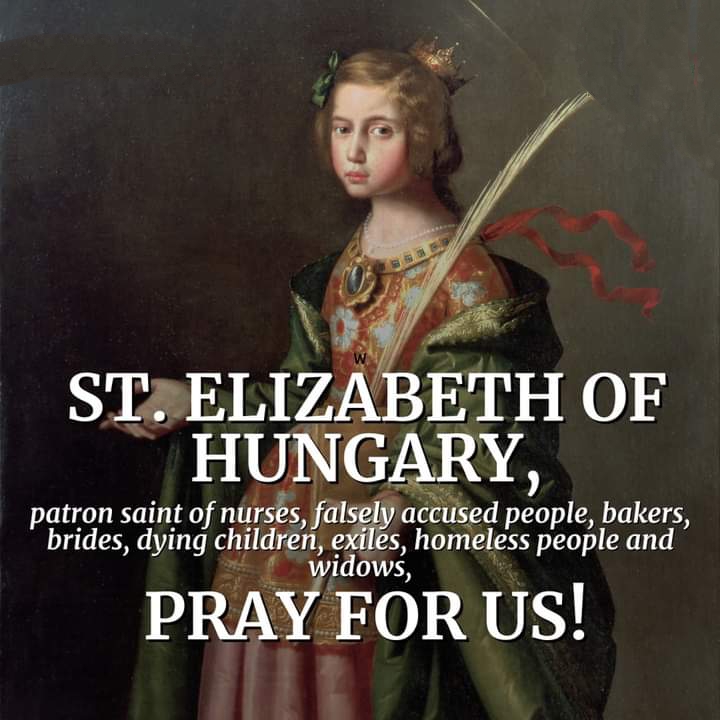 Dear Saint Elizabeth, you were always poor in spirit, most generous toward the poor, faithful to your husband, and fully consecrated to your Divine Bridegroom. Grant your help to widows and keep them faithful to their heavenly Lord.

Teach them how to cope with their loss and to make use of their time in the service of God. Teach us to remain worthy of God’s love and mercy, through Jesus our Lord. Amen 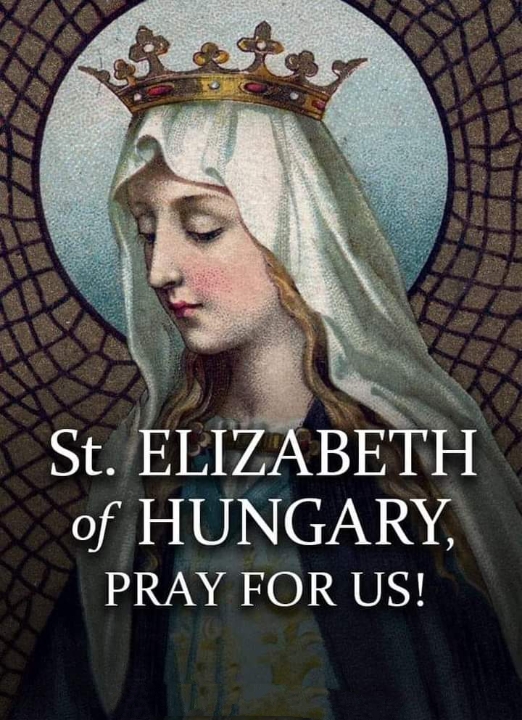 Saint Elizabeth of Hungary, pray for us.