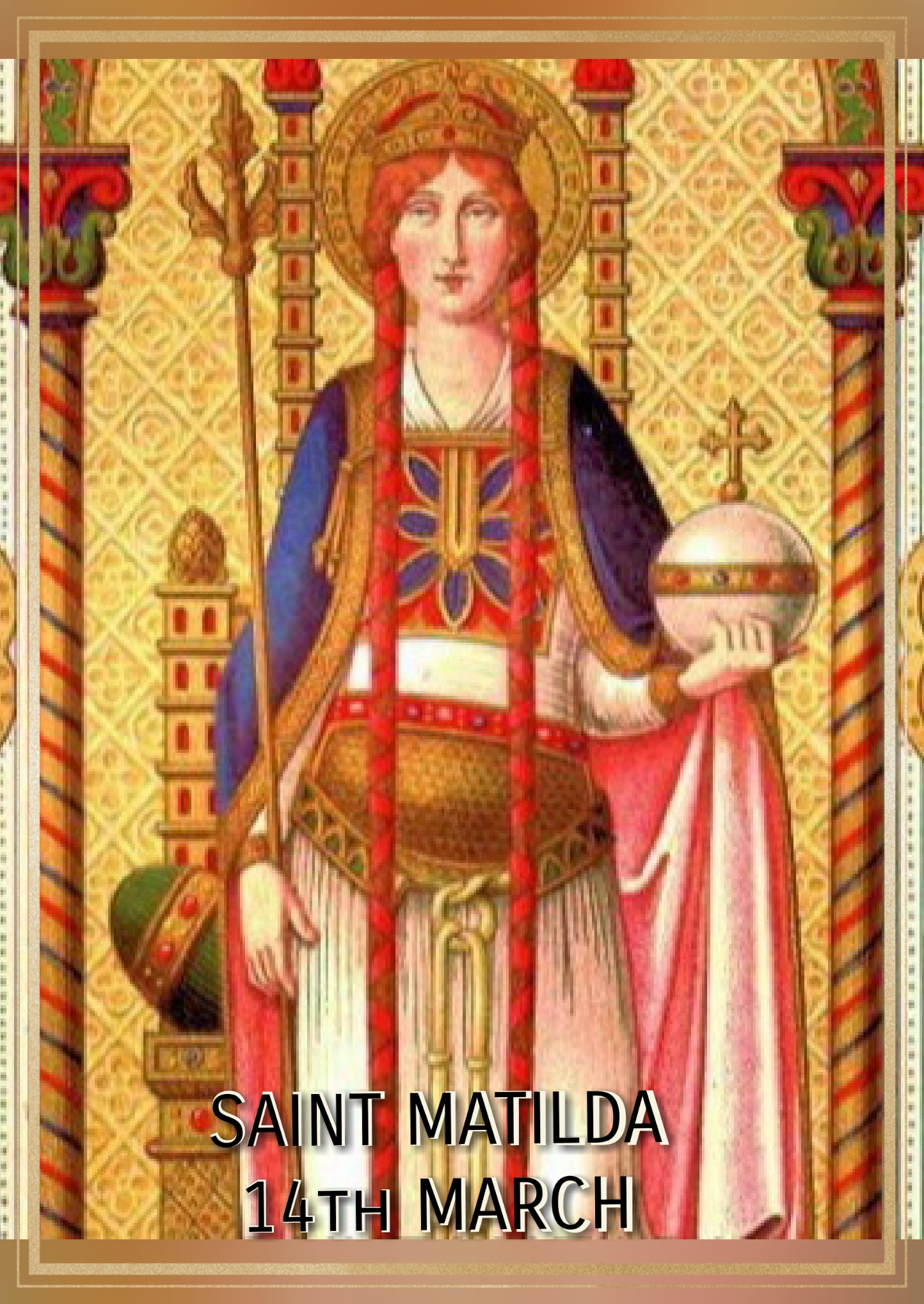 Matilda, of Ringelheim, 892 – 14 March 968, also known as Saint Matilda, was a Saxon noblewoman. Due to her marriage to Henry I in 909, she became the first Ottonian queen. Her eldest son, Otto I, restored the Holy Roman Empire in 962. Mathilde founded several spiritual institutions and women’s convents, as the Queen of Germany, wife of Henry I. She was born in Engern, Westphalia, Germany in 895 to Count Detrich and his wife, Reinhild. Raised by her grandmother, an abbess, she had an arranged marriage with King Henry the Fowler of Saxony in 1913.

She had three sisters; Amalrada, Bia, and Fridarun, who married Charles III of West Francia, king of West Francia; and a brother Beuve II, the Bishop of Châlons-sur-Marne. Due to Fridarun’s marriage to Count Wichmann the Elder, there was an alliance between the House of Billung and the Ottonian family, which expanded their possessions to the west.

Matilda became the mother of: Otto I, Emperor of Germany; Henry, Duke of Bavaria; St. Bruno, Archbishop of Cologne; Gerberga, who married Louis IV of France; Hedwig, the mother of Hugh Capet. As queen, Matilda was humble, holy, and very generous — always ready to help the poor and the down-trodden. 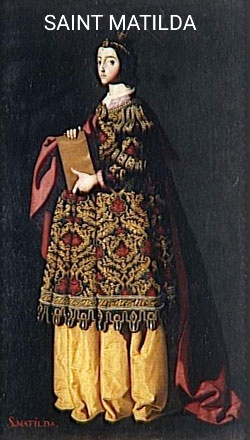 After Henry’s death 936 in Memleben, he was buried in Quedlinburg, where Queen Mathilde founded a convent the same year. She lived there during the following years and took care of the family’s memorialization. Thus Quedlinburg Abbey became the most important center of prayer and commemoration of the dead in the East-Franconian Empire.

Like in other convents, daughters of noble families were raised in Quedlinburg, to later become Abbesses in order to secure the families influence. One of them was her own granddaughter Matilda, daughter of Otto I and Adelheid of Burgundy, to whom she passed on the conducting of the convent in 966, after 30 years of leadership. The younger Mathilde therefore became the first abbess of the convent in Quedlinburg.

With her other goods, Queen Mathilde founded further convents, one of them in 947 in Enger. Her last foundation was the convent of Nordhausen in 961. Mathilde’s handling of her dowry, which she had received from King Henry I previous to his death, was subject to a dispute between her and Otto I during the years 936–946. Otto made a claim on his mother’s possessions, which eventually led to her fleeing into exile. Otto’s wife, Queen Eadgyth, is said to have brought about the reconciliation in which Mathilde left her goods and Otto was forgiven for his actions. 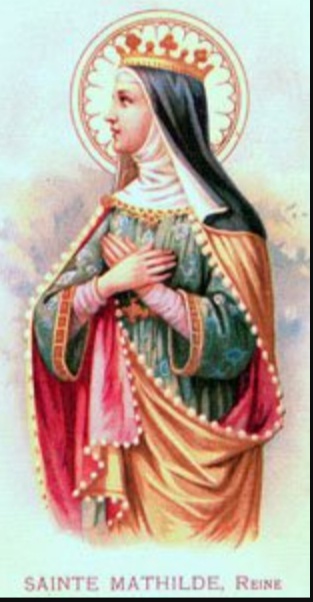 The exact circumstances of this feud are still controversial to this day, but in order to protect her goods, Mathilde acquired papal privileges for all monasteries in eastern Saxony in the period before her death in early 968. However, these efforts were ignored when Theophanu, the wife of Otto II, received Mathilde’s dowry after she died.

Following her husband’s death, Matilda had made an unsuccessful attempt to secure the throne for her favorite son Henry, but his elder brother was elected and crowned in 936. Later, when the two brothers joined in persecuting their mother, whom they accused of having impoverished the crown by her lavish almsgiving, she renounced the possessions the deceased king had left her, and retired to her villa at Engern in Westphalia.

When she suffered financial difficulties, Matilda was called back to the palace, and both Otto and Henry asked for her forgiveness. She built many churches and founded and supported numerous monasteries; she was known for her great charity. She died of natural causes in 968 and was buried in the monastery at Quedlinburg, Germany. Matilda was venerated as a saint immediately after her death. She is often pictured with a purse, and alms and is celebrated for her devotion to Prayer and Almsgiving. 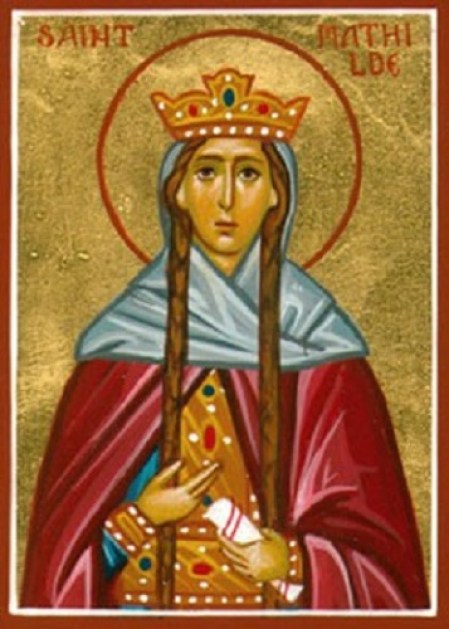 After Henry died Matilda gave her worldly jewels and possessions to a priest. Since she was persecuted by the emperor (her eldest son) as well as her youngest son, she escaped the country. She later returned as her eldest child (the emperor) was ill and he was seeking her forgiveness. She forgave, as Christ forgives and continued her missionary work by caring for the poor and constructing convents. She is Patroness of Large Families, and Patron for girls.

Almighty God, happy is she who, like Saint Matilda, despises the transitory glories and pleasures of this life for your kingdom, O God. Truly happy is she who sets the right value on the fallacious joys of this world, and tramples on them all, for purity of heart, charity, love of penance, and good works, which makes a diadem for a Christian’s head.

May we, like Saint Matilda, have no value for hoarding things of the earth, but instead, gather up treasures to store in the Heavenly Kingdom, in Jesus’ Name. Amen 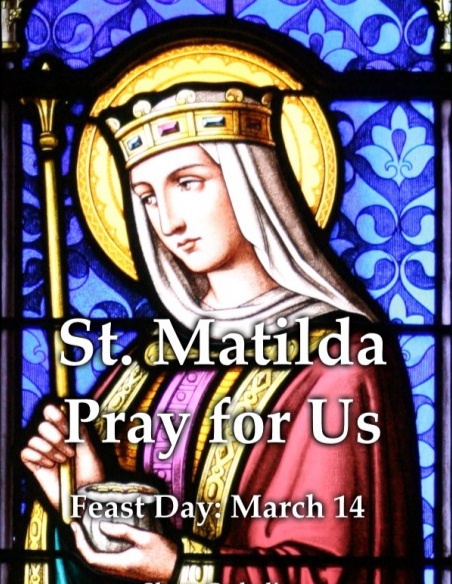 Saint Matilda, pray for us all!