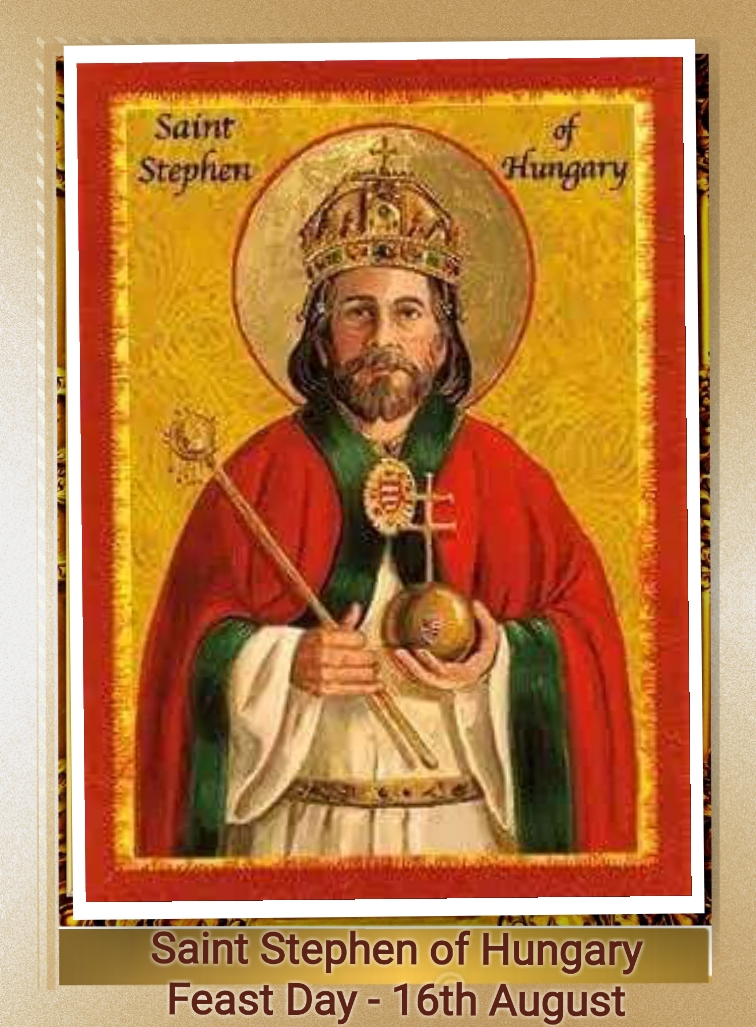 He was the only son of Grand Prince Géza and his wife, Sarolt, who was descended from a prominent family of gyulas. Although both of his parents were baptized, Stephen was the first member of his family to become a devout Christian. He married Gisela of Bavaria, a scion of the imperial Ottonian dynasty.

After succeeding his father in 997, Stephen had to fight for the throne against his relative, Koppány, who was supported by large numbers of pagan warriors. He defeated Koppány with the assistance of foreign knights including Vecelin, Hont and Pázmány, and native lords. He was crowned on 25 December 1000 or 1 January 1001 with a crown sent by Pope Sylvester II.

In a series of wars against semi-independent tribes and chieftains—including the Black Hungarians and his uncle, Gyula the Younger—he unified the Carpathian Basin. He protected the independence of his kingdom by forcing the invading troops of Conrad II, Holy Roman Emperor, to withdraw from Hungary in 1030.

Stephen established at least one archbishopric, six bishoprics and three Benedictine monasteries, leading the Church in Hungary to develop independently from the archbishops of the Holy Roman Empire. He encouraged the spread of Christianity by meting out severe punishments for ignoring Christian customs.

His system of local administration was based on counties organized around fortresses and administered by royal officials. Hungary enjoyed a lasting period of peace during his reign, and became a preferred route for pilgrims and merchants traveling between Western Europe, the Holy Land and Constantinople.

He survived all of his children, dying on 15 August 1038 aged 62 or 63. He was buried in his new basilica, built in Székesfehérvár and dedicated to the Holy Virgin. His death was followed by civil wars which lasted for decades. He was canonized by Pope Gregory VII, together with his son, Emeric, and Bishop Gerard of Csanád, in 1083.

Stephen is a popular saint in Hungary and neighboring territories. In Hungary, his feast day (celebrated on 20 August) is also a public holiday commemorating the foundation of the state, known as State Foundation Day.

Stephen’s father Géza promoted the spread of Christianity among his subjects by force, but never ceased worshipping pagan gods. Both his son’s Greater Legend and the nearly contemporaneous Thietmar of Merseburg described Géza as a cruel monarch, suggesting that he was a despot who mercilessly consolidated his authority over the rebellious Hungarian lords. 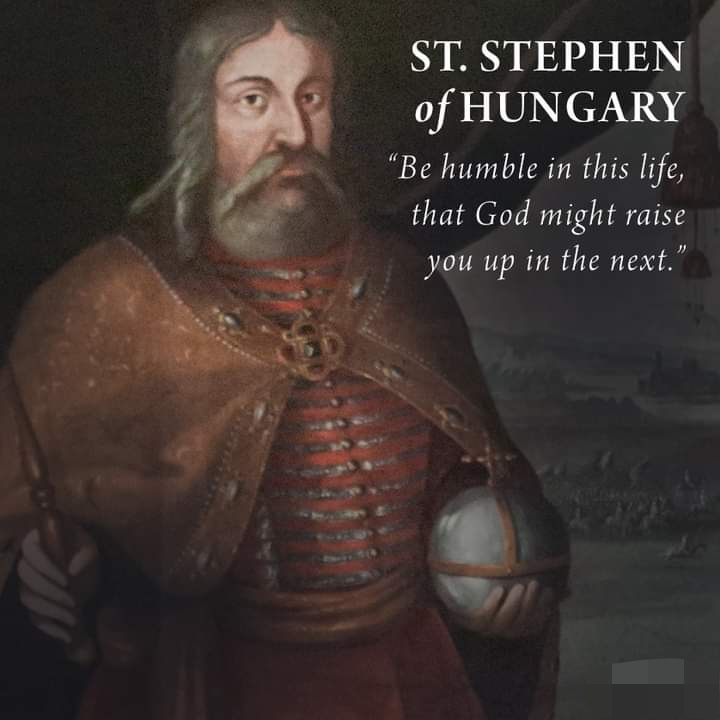 According to Stephen’s legends, Grand Prince Géza convoked an assembly of the Hungarian chieftains and warriors when Stephen “ascended to the first stage of adolescence”, at the age of 14 or 15. Géza nominated Stephen as his successor and all those present took an oath of loyalty to the young prince. Györffy writes, without identifying his source, that Géza appointed his son to rule the “Nyitra ducate” around that time.

Slovak historians, including Ján Steinhübel and Ján Lukačka, accept Györffy’s view and propose that Stephen administered Nyitra (now Nitra, Slovakia) from around 995. Géza arranged Stephen’s marriage, to Gisela, daughter of Henry II, Duke of Bavaria, in or after 995. This marriage established the first family link between a Hungarian ruler and a Western European ruling house, as Gisela was closely related to the Ottonian dynasty of Holy Roman Emperors.

According to popular tradition preserved in the Scheyern Abbey in Bavaria, the ceremony took place at the Scheyern castle and was celebrated by Saint Adalbert. Gisela was accompanied to her new home by Bavarian knights, many of whom received land grants from her husband and settled in Hungary, helping to strengthen Stephen’s military position.

According to Györffy, Stephen and his wife “presumably” settled in Nyitra after their marriage. Grand Prince Géza died in 997. Stephen convoked an assembly at Esztergom where his supporters declared him grand prince. Initially, he only controlled the northwestern regions of the Carpathian Basin; the rest of the territory was still dominated by tribal chieftains.

Stephen’s ascension to the throne was in line with the principle of primogeniture, which prescribed that a father was succeeded by his son. On the other hand, it contradicted the traditional idea of seniority, according to which Géza should have been succeeded by the most senior member of the Árpád dynasty, which was Koppány at that time, who held the title Duke of Somogy, for many years administering the regions of Transdanubia.

Kristó states that the entire conflict between Stephen and Koppány was only a feud between two members of the Árpád dynasty. Koppány and his troops invaded the northern regions of Transdanubia, took many of Stephen’s forts and plundered his lands. Stephen, who, according to the Illuminated Chronicle, “was for the first time girded with his sword”, placed the brothers Hont and Pázmány at the head of his own guard and nominated Vecelin to lead the royal army.

Koppány was besieging Veszprém when he was informed of the arrival of Stephen’s army. In the ensuing battle, Stephen won a decisive victory over his enemies. Koppány was killed on the battlefield. His body was quartered and its parts were displayed at the gates of the forts of Esztergom, Győr, Gyulafehérvár (Alba Iulia, Romania) and Veszprém in order to threaten all of those who were conspiring against the young monarch.

Stephen occupied Koppány’s duchy and granted large estates to his own partisans. He also prescribed that Koppány’s former subjects were to pay tithes to the Pannonhalma Archabbey, according to the deed of the foundation of this monastery which has been preserved in a manuscript containing interpolations. The same document declares that there were no other bishoprics and monasteries in Hungary.

On the other hand, the nearly contemporary Bishop Thietmar of Merseburg stated that Stephen “established bishoprics in his kingdom” before being crowned king. If the latter report is valid, the dioceses of Veszprém and Győr are the most probable candidates, according to historian Gábor Thoroczkay. 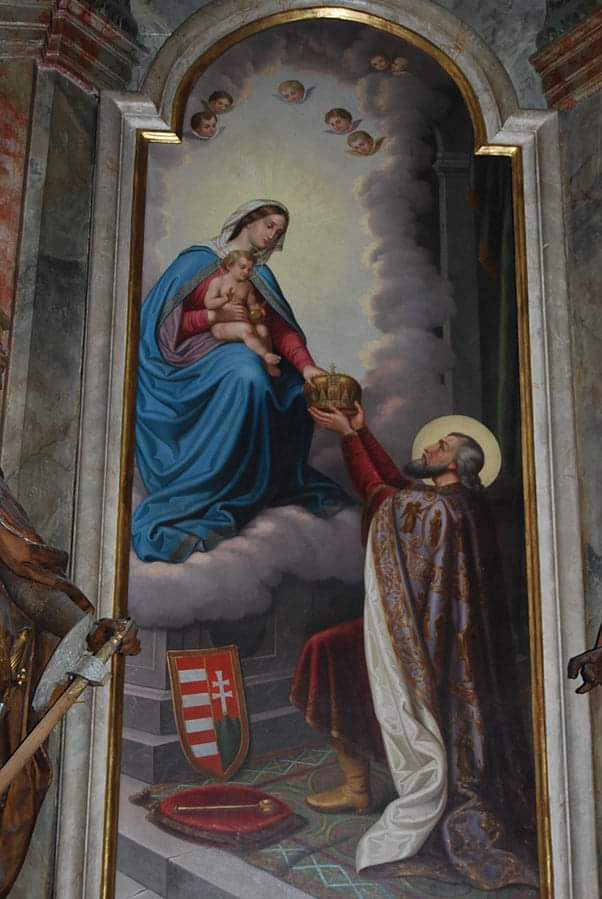 By ordering the display of one part of Koppány’s quartered corpse in Gyulafehérvár, the seat of his maternal uncle, Gyula the Younger, Stephen asserted his claim to rule all lands dominated by Hungarian lords. He also decided to strengthen his international status by adopting the title of king. However, the exact circumstances of his coronation and its consequences are subject to scholarly debate.

Although Stephen’s power did not rely on his coronation, the ceremony granted him the internationally accepted legitimacy of a Christian monarch who ruled his realm “by the Grace of God”. All his legends testify that he established an archbishopric with its see in Esztergom shortly after his coronation. This act ensured that the Church in Hungary became independent of the prelates of the Holy Roman Empire.

The earliest reference to an archbishop of Esztergom, named Domokos, has been preserved in the deed of foundation of the Pannonhalma Archabbey from 1002. According to historian Gábor Thoroczkay, Stephen also established the Diocese of Kalocsa in 1001. Stephen invited foreign priests to Hungary to evangelize his kingdom.

Associates of the late Adalbert of Prague, including Radla and Astrik, arrived in Hungary in the first years of his reign. The presence of an unnamed “Archbishop of the Hungarians” at the synod of 1007 of Frankfurt and the consecration of an altar in Bamberg in 1012 by Archbishop Astrik show that Stephen’s prelates maintained a good relationship with the clergy of the Holy Roman Empire.

The transformation of Hungary into a Christian state was one of Stephen’s principal concerns throughout his reign. Although the Hungarians’ conversion had already begun in his father’s reign, it was only Stephen who systematically forced his subjects to give up their pagan rituals. His legislative activity was closely connected with Christianity.

For example, his First Book of Laws from the first years of his reign includes several provisions prescribing the observance of feast days and the confession before death. His other laws protected property rights and the interests of widows and orphans, or regulated the status of serfs.

Stephen’s biographer, Hartvic, narrates that the King, whose children died one by one in infancy, “restrained the grief over their death by the solace on account of the love of his surviving son”, Emeric. However, Emeric was wounded in a hunting accident and died in 1031. After the death of his son, the elderly King could never “fully regain his former health”, according to the Illuminated Chronicle.

Kristó writes that the picture, which has been preserved in Stephen’s legends, of the king keeping the vigils and washing the feet of paupers, is connected with Stephen’s last years, following the death of his son. Emeric’s death jeopardized his father’s achievements in establishing a Christian state, because Stephen’s cousin, Vazul—who had the strongest claim to succeed him—was suspected of an inclination towards paganism.

According to the Annals of Altaich Stephen disregarded his cousin’s claim and nominated his sister’s son, the Venetian Peter Orseolo, as his heir. The same source adds that Vazul was captured and blinded, and his three sons, Levente, Andrew and Béla, were expelled from Hungary. Stephen’s legends refer to an unsuccessful attempt upon the elderly king’s life by members of his court. 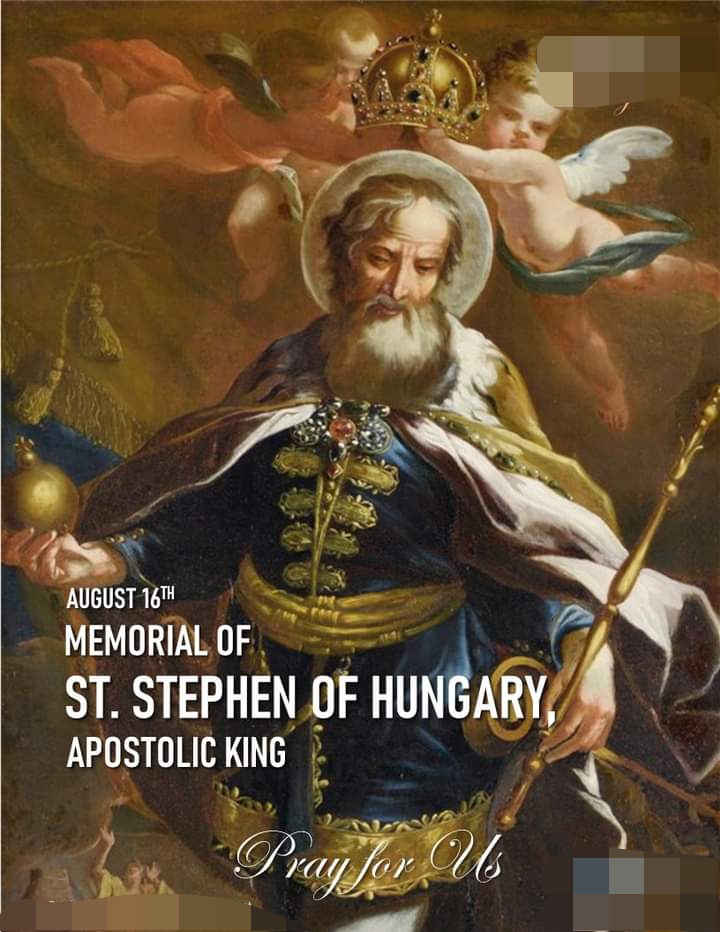 According to Kristó, the legends refer to a plot in which Vazul participated and his mutilation was a punishment for this act. In the view of some historians, provisions in Stephen’s Second Book of Laws on the “conspiracy against the king and the kingdom” imply that the book was promulgated after Vazul’s unsuccessful plot against Stephen.

Stephen died on 15 August 1038. He was buried in the basilica of Székesfehérvár. His reign was followed by a long period of civil wars, pagan uprisings and foreign invasions. The instability ended in 1077 when Ladislaus, a grandson of Vazul, ascended the throne.

It is said that Stephen’s father Geza, the fourth Duke of Hungary, and his wife converted together to the church Jesus founded. In a vision, they saw St. Stephen the Martyr, who told them their son would perfect the work they began. Their son was born in 977 and named Stephen.

Stephen was carefully educated and became Duke of Hungary at an early age. He rooted out idolatry, suppressed a rebellion by pagan nationalists, and founded monasteries and churches. He asked Pope Sylvester to appoint bishops to the eleven sees he had endowed. The Pope granted Stephen’s requests; and crowned Stephen King of Hungary.

King Stephen placed his kingdom under the protection of our blessed Lady, gave and enforced good laws and served his people as he served Jesus. His only wars were wars of defence, and he was always successful. God sent him many and sore trials. One by one his children died, but he bore everything with perfect reliance upon the will of God.

Before King Stephen died, he urged Hungary’s bishops and nobles to nurture and cherish the Catholic Church, which was still as a tender plant in Hungary. He passed away during the feast day of the Assumption of Mary: Attaining the beatific vision and beholding God face to face forever.

We give You thanks, O Lord of Glory,
for the example of the first martyr, Saint Stephen, who looked up to heaven and prayed for his persecutors to Your Son Jesus Christ. Saint Stephen of Hungary emulated his life, as a model of virtue.

We pray that we too learn from the lives of the Saints, who lived in imitation of Christ, Who stands at Your right hand, where He lives and reigns with You and the Holy Spirit, One God, in glory forever. Amen 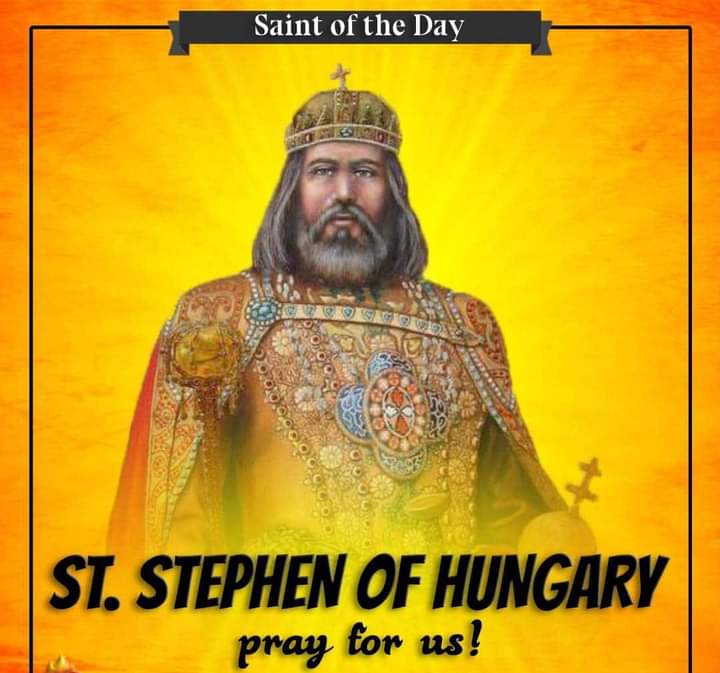 St. Stephen of Hungary, pray for us.