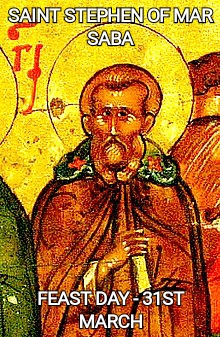 The example of this 8th century saint should reassure anyone who thinks that great or grandiose deeds are necessary for a sanctified life. Saint Stephen of Mar Saba (725 – 794), whose feast day is March 31st, lived a quiet, unassuming and prayerful existence, but his service to others through contemplation and works led to him being an exemplar of holiness and peace.

He ministered for half a century within the community of Mar Saba, a monastery established by Saint Sabas in the 5th century. His witness of heroic virtue and selfless love illustrates the extraordinary power of God’s grace to transform and ennoble ordinary life. A nephew of Saint John Damascene, one of the most learned men of his time, young Stephen was introduced to monastic life at the age of ten.

From then until he reached the age of 24, he received instruction from his uncle, upon whose death he became both a monk and an ordained priest. Stephen’s spiritual insight was especially evident in the charitable guidance he accorded his fellow monks. At Mar Saba, he labored variously as a spiritual director, guest-master, cantor, dispenser and special guest-master overseeing the igumen’s (Abbot’s) quarters.

St. Stephen is called the Wonderworker because once while celebrating the Holy Sacrifice of the Mass, he experienced a transcendent radiance. As he elevated the Eucharist and recited the words, “Holy things to the holy”, the cell in which he was praying filled with brilliant light. The miraculous incandescence emanated from Stephen himself. From that day forward, whatever he requested during the Eucharistic Liturgy was granted. In this, he radiated God’s immense love for man.

After several years of service to the monastery, Stephen requested permission to live as a hermit. It was granted conditionally; his superiors allowed him to pray as a hermit during the week, but, on the weekend, expected him to exercise his skills as a counselor. At 37, he went into total solitude for fifteen years, three times going into the desert around the Dead Sea for Lent.
He died at peace in 794.

Dear God, Almighty Father, you have created us in your image and all who live edifying your creation are worthy of sainthood. Whatever help, spiritual or material, Saint Stephen of Mar Saba, who lived a life in Christ Jesus, was asked to give, he gave. He received and honored all with the same kindness.

He possessed nothing and lacked nothing. Yet, even in total poverty, living according to your Will, he possessed all things. Help us to imitate and emulate Saint Stephen, to spread peace in the world, through Christ our Lord. Amen 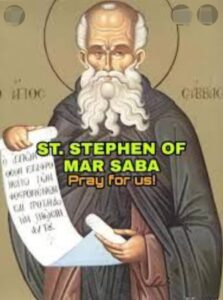 Saint Stephen of Mar Saba, pray for us.