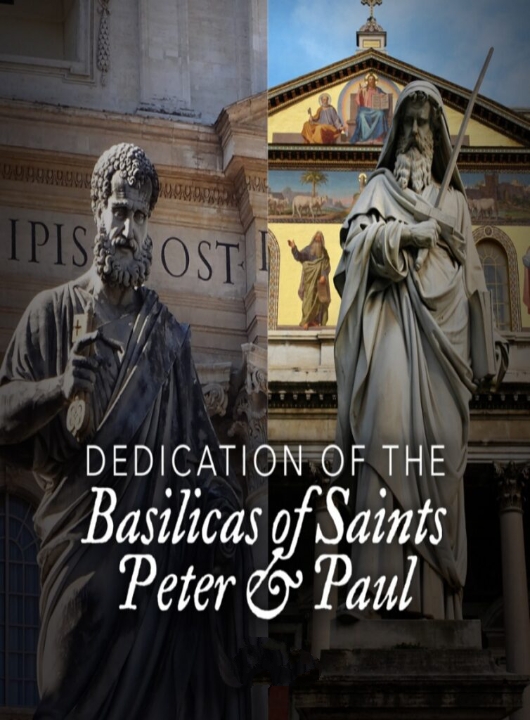 FEAST OF THE BASILICAS OF SAINTS PETER AND PAUL.
FEAST DAY – 18th NOVEMBER 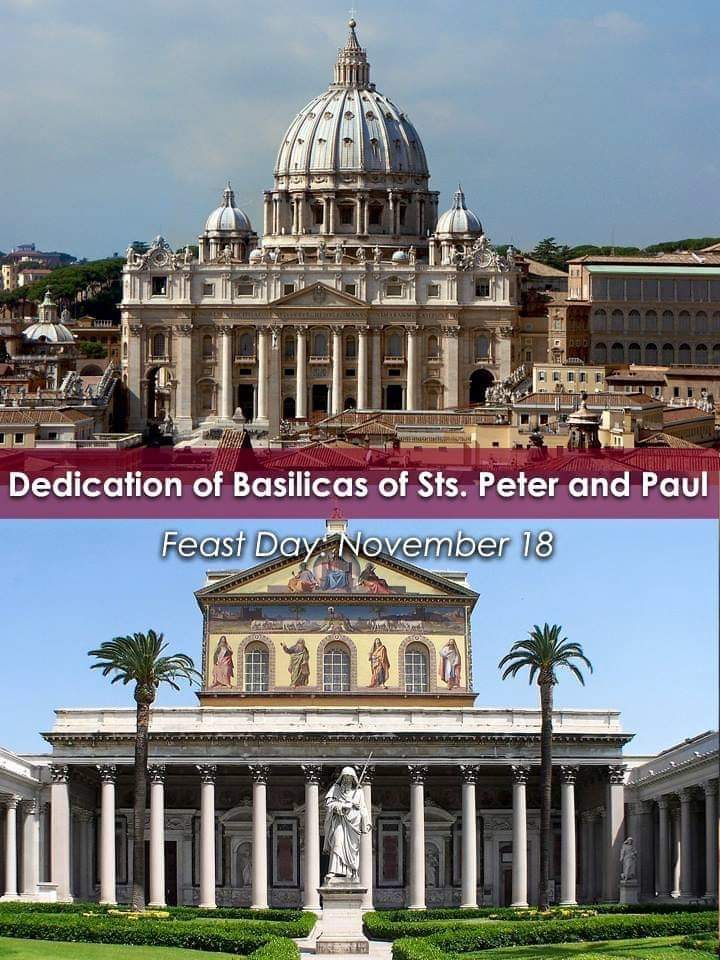 The Feast of today, celebrates the dedications of two of four major Basilicas in Rome. The present Basilica of St. Peter was consecrated, in 1626. Under construction for more than a century, it enlarged the footprint of the original Basilica. That prior fourth century Basilica was so dilapidated by the early 1500s, that priests declined the very idea of saying Mass at a few altars, afraid that the creaky building’s drooping roofs and unsteady walls would collapse at any moment.

The ancient Basilica of St. Paul was consumed by a raging fire in 1823. The rebuilt Basilica was dedicated on December 10, 1854, a couple of days after Pope Pius IX had formally spread the dogma of Mary’s Immaculate Conception. Saint Peter’s Basilica was originally built in 323 by the emperor Constantine. 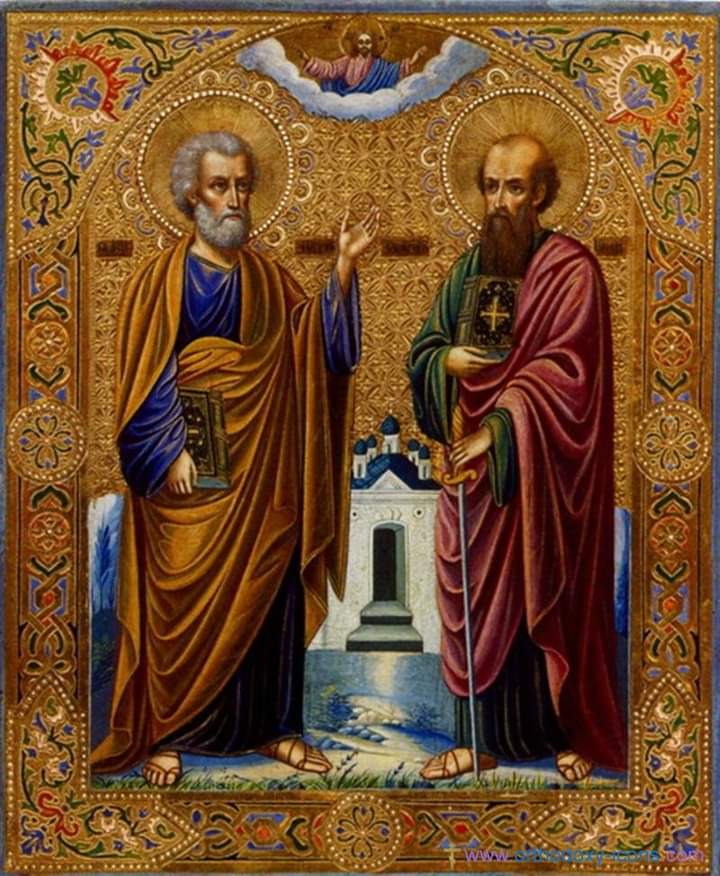 It was constructed over the tomb of Peter the Apostle, the Church’s first Pope. After more than a thousand years, Pope Julius II directed that the building be torn down due to structural concerns. The new church took over 200 years for completion. It was dedicated on Nov. 18, 1626. It is considered the most famous church in Christendom.

Saint Paul’s Basilica, located outside the original walls of Rome, had also been built by the emperor Constantine. Funds donated from around the world made the reconstruction possible. Before the completion of Saint Peter’s Basilica, St Paul’s was the largest church in Rome. The Basilica was built over St. Paul´s grave. Pope Pius IX consecrated the Basilica in 1854. A cathedral is considered to be theology in stone, such as these two consecrated Basilicas. 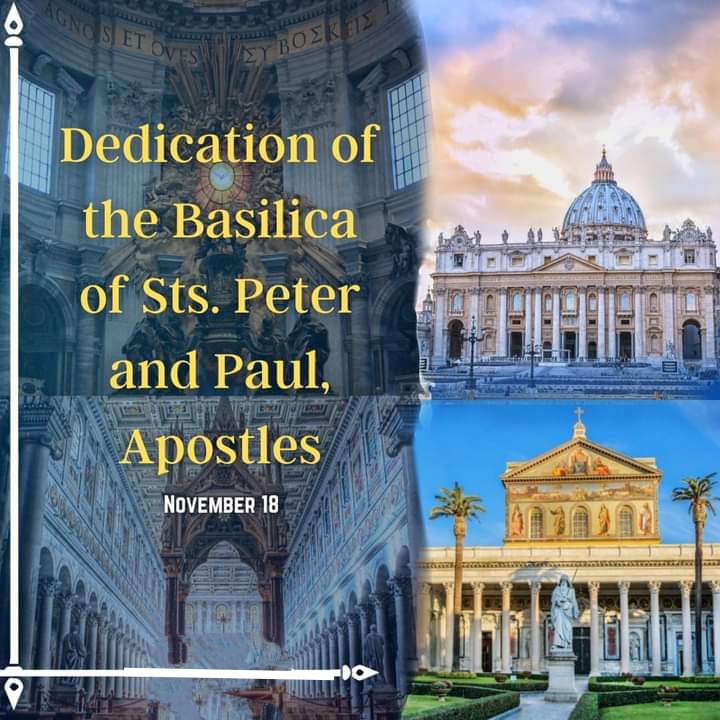 The foundations of these two Basilicas are each sunk deep into the ground of the blood of martyrs of first-century Christianity, though today’s impressive structures stand proxy for their older, long-razed originals. The two Basilicas were, for centuries, linked by a mile’s long, roofed colonnade that snaked through the streets of Rome, sheltering the masses of pilgrims flowing from one Basilica to the next as they procured their indulgences. Rome’s two great proto-martyrs were joined by a sort of theological umbilical cord in the womb of Mother Church.

The Bishop of Rome’s headship was not merely symbolic but actively intervened in practical matters of church governance throughout Christendom. The pope, the indispensable Christian, was often depicted in early Christian art as a second Moses, who received from Christ the commandments of the New Testament for the new people of God. 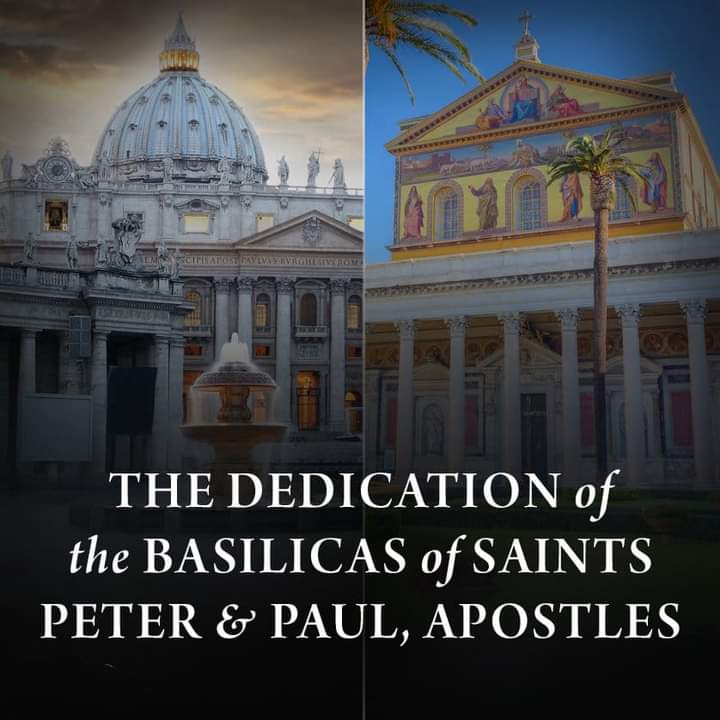 At intervals of five years, every diocesan bishop in the Catholic Church is under obligation to visit the tombs of the apostles. This means they pray at the tombs of Saints Peter and Paul in Rome and personally report to Saint Peter’s successor. These visits are a prime example of the importance of the pope, and they are exercised daily, in many different ways, a core duty far more significant than the pope’s infallibility, which is very rarely exercised.

There is no office of Saint Paul in the Church. When Paul died, his office died. On today’s feast, we recall that some churches can also be graveyards. Both Basilicas are sacred burial grounds. These two churches continue to draw millions of faithful pilgrims each year as well as many visitors from other faiths .

Holy martyrs Peter and Paul, your tombs are the sacred destinations of many pilgrimages to the eternal city. May all visits to the Basilicas dedicated to your honor deepen one’s love and commitment to Mother Church.

O Holy St Peter and Paul, upon you, Almighty God has built His Church. Obtain for us, we pray, lively faith, firm hope, burning love and perseverance in the grace of God unto death. Amen 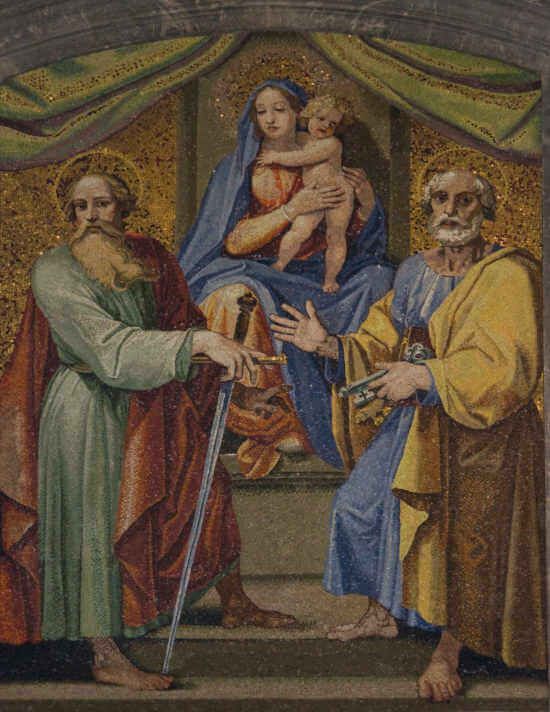