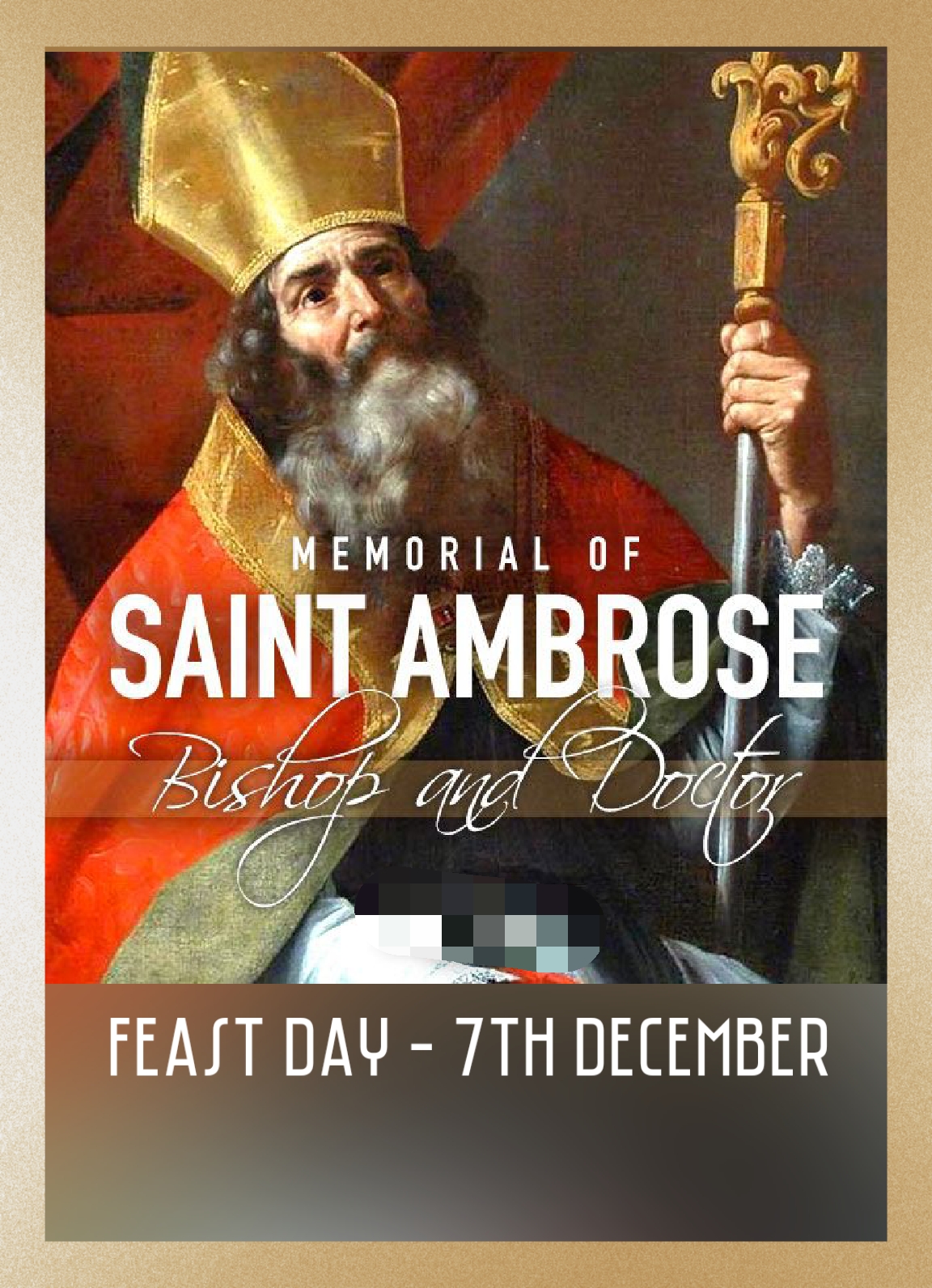 St. Ambrose, was born in 339, in Gaul now Trier, Germany, and died in 397. He was Bishop of Milan, biblical critic, doctor of the church, and initiator of ideas that provided a model for medieval conceptions of church–state relations. Though Ambrose, the second son of the Prefect of Gaul, was born in the official residence at Augusta Treverorum (now Trier, Germany), his father died soon afterward, and Ambrose was reared in Rome, in a palace frequented by the clergy, by his widowed mother and his elder sister Marcellina, a nun.

Promoted to the governorship of Aemilia-Liguria about 370, he lived at Milan and was unexpectedly acclaimed as their bishop by the people of the city in 374. Ambrose, a popular outsider, was chosen as a compromise candidate to avoid a disputed election. He changed from an unbaptized layman to a bishop in eight days. As bishop of Milan, he was able to dominate the cultural and political life of his age.

An imperial court frequently sat in Milan. In 384 he secured the rejection of an appeal for tolerance by pagan members of the Roman Senate. In 385–386 he refused to surrender a church for the use of Arian heretics. In 388 he rebuked the emperor Theodosius for having punished a bishop who had burnt a Jewish synagogue. In 390 he imposed public penance on Theodosius for having punished a riot in Thessalonica by a massacre of its citizens. These unprecedented interventions were palliated by Ambrose’s loyalty and resourcefulness as a diplomat, notably in 383 and 386 by his official visits to the usurper Maximus at Trier.

In his letters and in his funeral orations on the emperors Valentinian II and Theodosius—De obitu Valentiniani consolatio (392) and De obitu Theodosii (395)—Ambrose established the medieval concept of a Christian emperor as a dutiful son of the church, “serving under orders from Christ” and so subject to the advice and strictures of his bishop. Ambrose’s relations with the emperors formed only part of his commanding position among the lay governing class of Italy. He rapidly absorbed the most up-to-date Greek learning, Christian and pagan alike—notably the works of Philo, Origen, and St. Basil of Caesarea and of the pagan Neoplatonist Plotinus.

This learning he used in sermons expounding the Bible and, especially, in defending the “spiritual” meaning of the Old Testament. His literary pieces were acclaimed as masterpieces of Latin eloquence, and they remain a quarry for students of the transmission of Greek philosophy and theology in the West. By such sermons Ambrose gained his most notable convert, Augustine, afterward bishop of Hippo in North Africa and destined, like Ambrose, to be revered as a doctor (teacher) of the church. Augustine went to Milan as a skeptical professor of rhetoric in 384. When he left, in 388, he had been baptized by Ambrose and was indebted to Ambrose’s Catholic Neoplatonism, which provided a philosophical base that transformed Christian theology.

Ambrose provided educated Latins with an impeccably classical version of Christianity, seeking to replace the heroes of Rome with Old Testament saints as models of behaviour for a Christianized aristocracy. By letters, and nominations, he strengthened this aristocratic Christianity in the northern Italian towns that he had once ruled as a Roman governor. In Milan, Ambrose “bewitched” the populace by introducing new Eastern melodies and composing beautiful hymns.

He spared no pains in instructing candidates for baptism. He denounced social abuses and frequently secured pardon for condemned men. He advocated the most austere asceticism. Noble families were reluctant to let their marriageable daughters attend the sermons in which he urged upon them the crowning virtue of virginity. He is a patron saint of Milan and of beekeepers. His feast day is December 7.

Lord God, the holy Saint Ambrose spared no pains to help others learn the truth of Christianity. Help us, Lord, to spread your Holy Word, using the sweetness of speech like Saint Ambrose, to charm listeners to the faith. Hear our prayers and obtain for us the special grace of knowledge and wisdom.

Lord God, you made Saint Ambrose an outstanding teacher of the faith. We are in awe of his faith and we hope that we gain the great virtue of always seeking and spreading the gospel truth. In the Name of Jesus Christ. Amen 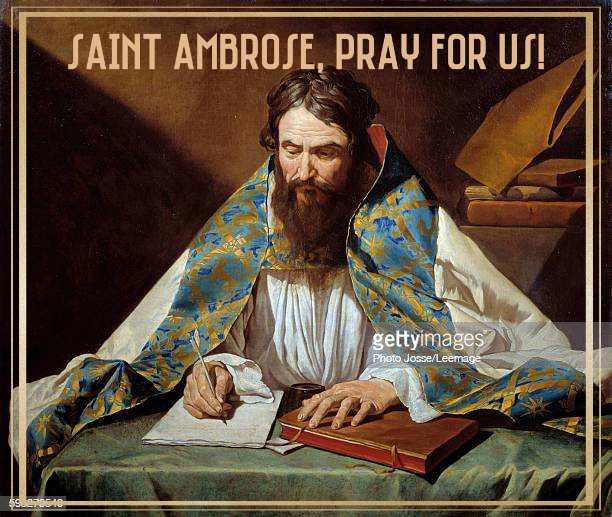 Help us, St. Ambrose, to live our lives seeking truth and wisdom. Amen