Saint Cuthbert, (634 – 20 March 687) was an Anglo-Saxon monk from the Kingdom of Northumbria, who became the bishop of Lindisfarne and one of the most important saints of the medieval church in England. He first became a monk at Melrose c. 651 and later spent time in the communities at Ripon and Lindisfarne. He retired to the island of Farne in 676, to lead a life of solitude, but was offered a bishopric in 684.

He was reluctant to leave his hermitage, but after a visit from King Ecgfrith (r. 679 – 685) himself, Cuthbert was persuaded to accept the new position and was named bishop of Lindisfarne. Already renowned during his life for his miracles and piety, after death Cuthbert became the patron saint of Northumbria. His life is recounted in four important works dating to a decade or two after his death.

The earliest of these was written by an anonymous monk of Lindisfarne probably no later than 705. Three others were written by Bede, one prose, one verse and an account of Cuthbert’s life in his Ecclesiastical History of the English People. Both Bede and the anonymous Lindisfarne biographer draw on first-hand accounts from those who knew Cuthbert personally.

The precise location of Cuthbert’s birth is uncertain, though he seems to have spent his earliest years in Lothian and Lowland Scotland, which was then Northumbrian territory. Very little is known about his family, though there is some evidence to suggest he had a wealthy background. According to Bede, in his teenage years, he worked as a shepherd and may have spent some time as a soldier.

Cuthbert was eight years old when he began experiencing a series of miracles which ultimately led him to pursue his monastic career. The first of these events occurred when a much younger child approached him and predicted that Cuthbert would one day be consecrated as a bishop and insisted that it was not at all fitting for him to behave like other children. Cuthbert heeded this child’s words, deciding to lead a serious life.

Another miraculous event involved a painful infection of his knee, which grew so swollen that he could hardly walk. While Cuthbert suffered, a rider approached him on horseback, dressed all in white, and told him how to treat his knee. Cuthbert followed the advice and soon his knee was restored. Afterwards, Cuthbert realized that this rider had been an angel.

In yet another episode, Cuthbert encountered a crowd of onlookers taunting a group of monks caught adrift while rafting on the River Tyne. Cuthbert knelt down and prayed for the deliverance of the monks who were in danger of drowning. As he prayed, the wind turned and carried the men safely back to shore. One more miracle in Cuthbert’s youth seems to have driven him to join a medieval monastery.

He and a few companions were tending a flock of sheep one night when he witnessed a bright light in the sky and a heavenly choir descending to earth before returning to heaven with a particularly dazzling soul. Cuthbert assured his companions that they must have seen the soul of some saint being led to heaven. The next morning the news arrived that Bishop Aidan of Lindisfarne had passed away that night.

Cuthbert immediately decided to pursue a religious career, returned the sheep to their owners, and set off for Melrose to join the monastic community there. His monastic career began in late 651. Bede notes that he arrived at Melrose on horseback, with a spear, and in the company of a servant, which would seem to suggest an aristocratic upbringing. At Melrose, Cuthbert first received instruction from Prior Boisil, who apparently foresaw what a holy man Cuthbert would become.

Not long after, a new abbot, Eata, arrived at Melrose. Boisil told Eata about Cuthbert’s potential, and Eata granted permission for Cuthbert to receive the monastic tonsure. After approximately seven years at Melrose, Cuthbert accompanied Eata and several other monks to a new monastery at Ripon, which had been founded by King Ahlfrith/Aldfrith of Deira (r. 655 – 664).

At Ripon, Cuthbert was given the title of guest-master and welcomed a stranger to the abbey whom he offered water for washing and food to eat. The guest at first refused the food, but Cuthbert eventually persuaded him. When Cuthbert returned with the food, he found the guest had gone but had not left any footprints in the snow, and he found several perfectly baked loaves of bread, proving that the guest had been an angel.

Though educated in the Celtic tradition, Cuthbert followed his mentor Eata in accepting the Roman forms, after the Synod of Whitby in 664. There were many miracles that accompanied his early life, but he was evidently indefatigable as a travelling priest, spreading the Christian message to remote villages, and well able to impress royalty and nobility. Unlike Wilfrid, his style of life was austere, and he often lived the life of a hermit.

Cuthbert was probably fostered at Melrose, fostering possibly being a sign of noble birth, as are references to his riding a horse when young. Edwin Burton finds it a suggestion of lowly parentage that as a boy he used to tend sheep on the hills near that monastery. He appears to have undergone military service, but at some point he joined the very new monastery at Melrose, under the prior Boisil.

Upon Boisil’s death in 661, Cuthbert succeeded him as prior. Cuthbert was possibly a second cousin of King Aldfrith of Northumbria (according to Irish genealogies), which may explain his later proposal that Aldfrith should be crowned as monarch. Cuthbert’s fame for piety, diligence, and obedience quickly grew.

When Alchfrith, king of Deira, founded a new monastery at Ripon, Cuthbert became its praepositus hospitum or guest master under Eata. When Wilfrid was made abbot of the monastery, Eata and Cuthbert returned to Melrose. Illness struck the monastery in 664 and while Cuthbert recovered, the prior died and Cuthbert was made prior in his place. He spent much time among the people, ministering to their spiritual needs, carrying out missionary journeys, preaching, and performing miracles.

His asceticism was complemented by his charm and generosity to the poor, and his reputation for gifts of healing and insight led many people to consult him, gaining him the name of “Wonder Worker of Britain”. He continued his missionary work, travelling the breadth of the country from Berwick to Galloway to carry out pastoral work and founding an oratory at Dull, Scotland. He is also said to have founded St Cuthbert’s Church in Edinburgh.

Cuthbert retired in 676, moved by the desire for a more contemplative life. With his abbot’s leave, he moved to a spot which Archbishop Eyre identifies with St Cuthbert’s Island near Lindisfarne, but which Raine thinks was near Holburn, at a place now known as St Cuthbert’s Cave. Shortly afterwards, Cuthbert moved to Inner Farne island, two miles from Bamburgh, off the coast of Northumberland, where he gave himself up to a life of great austerity.

At first he received visitors, but later he confined himself to his cell and opened his window only to give his blessing. He could not refuse an interview with the holy abbess and royal virgin Elfleda, the daughter of Oswiu of Northumbria, who succeeded St Hilda as abbess of Whitby in 680. The meeting was held on Coquet Island, further south off the Northumberland coast.

In 684, Cuthbert was elected Bishop of Hexham at a synod at Twyford (believed to be present-day Alnmouth), but was reluctant to leave his retirement and take up his charge; it was only after a visit from a large group, including king Ecgfrith, that he agreed to return and take up the duties of bishop, but instead as Bishop of Lindisfarne, swapping with Eata, who went to Hexham instead.

He was consecrated at York by Archbishop Theodore and six bishops, on 26 March 685. But after Christmas 686 he returned to his cell on Inner Farne Island, where he died on 20 March 687, after a painful illness. He was buried at Lindisfarne, and after long journeys escaping the Danes his remains chose, as was thought, to settle at Durham, causing the foundation of the city and Durham Cathedral. The St Cuthbert Gospel is among the objects later recovered from St Cuthbert’s coffin, which is also an important artefact.

After Cuthbert’s death, numerous miracles were attributed to his intercession and to intercessory prayer. According to Bede’s life of the saint, when Cuthbert’s sarcophagus was opened eleven years after his death, his body was found to have been perfectly preserved or incorrupt. This miracle led to the steady growth of Cuthbert’s posthumous cultus, to the point where he became the most popular medieval saint and patron of Northern England.

Everliving God, Who called your servant Cuthbert to proclaim the Gospel in northern England and endued him with a loving heart and a gentle spirit, grant us grace to live as he did, in simplicity, humility and love for the poor; through Jesus Christ, who came among us as one who serves, and who lives and reigns with you in the unity of the Holy Spirit, one God forever and ever. Amen 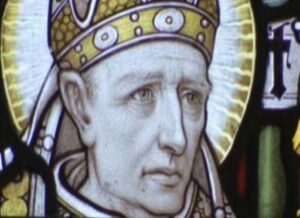 Saint Cuthbert, pray for us all.