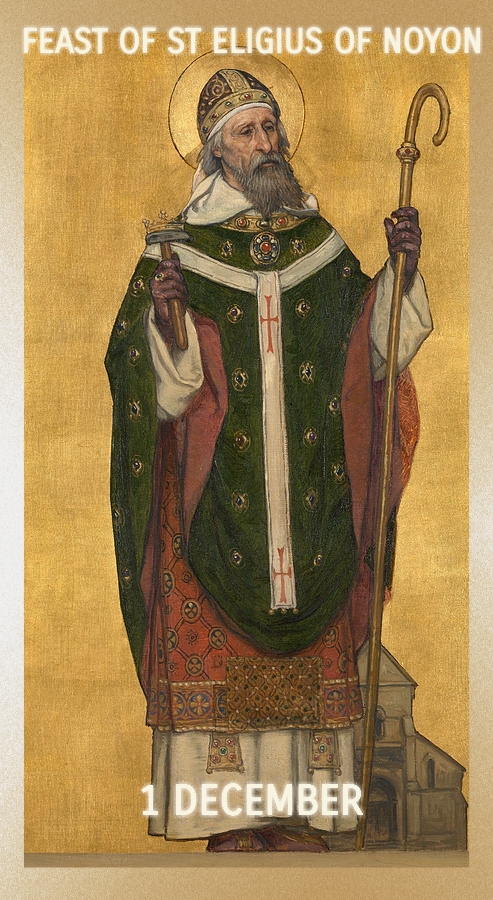 Eligius was a Bishop of Noyon, Tournai, and was born at Chaptelat near Limoges, France, c. 590, of Roman parents, Eucherius and Terrigia. His father, observed great talent in his son, so he sent him to the noted goldsmith Abbo, master of the mint at Limoges, to learn the craft of a goldsmith. Eligius later went to Neustria, where he worked under Babo, the royal treasurer, on whose recommendation Clotaire II commissioned him to make a throne of gold, adorned with precious stones.

He was honest and dedicated and the king, greatly impressed, appointed him master of the mint at Marseilles, and adopted him into his household. After the death of Clotaire (629), Dagobert appointed his father’s friend his chief councillor. The fame of Eligius spread far and wide, and ambassadors first paid their respects to him before going to the king. His success in influencing the Breton King, Judicail, to submit to Frankish authority added to his fame.

Eligius used this to his advantage, to obtain alms for the poor and to ransom Roman, Gallic, Breton, Saxon, and Moorish captives, who arrived everyday, at Marseilles. He founded several monasteries, and taking the king’s consent, sent his servants through towns and villages to take down the bodies of malefactors who had been executed, and give them decent burial.

The people at court were inspired by Eligius, who lived with his friend Dado (Audoenus) according to the Irish monastic rule, introduced into Gaul by St. Columbanus. Eligius followed this rule, either entirely or in part, introducing it into the monastery of Solignac, which he founded in 632, and into the convent at Paris where three hundred virgins were under the guidance of the Abbess Aurea. He built the basilica of St. Paul, and restored that of St. Martial in Paris.

He founded several churches in honour of the relics of St Martin of Tours, the national saint of the Franks, and St. Denis, who was chosen patron saint by the king. On the death of Dagobert (639), Queen Nanthilde took the reins of government, and Eligius and Dado left the court and entered the priesthood. On the death of Acarius, Bishop of Noyon-Tournai, 13 May, 640, Eligius was made his successor with the unanimous affirmation of clergy and people.

The people of his diocese were mostly pagans. He undertook the conversion of the Flemings, Antwerpians, Frisians, Suevi, and the barbarian tribes along the coast. In 654 he approved the famous privilege granted to the Abbey of Saint-Denis, Paris, exempting it from the jurisdiction of the ordinary. In his own episcopal city of Noyon he built and endowed a monastery for virgins.

After finding of the body of St. Quentin, Bishop Eligius built a church inhis honor, to which a monastery was joined under the Irish rule. He also discovered the bodies of St. Piatus and companions, and in 654 removed the remains of St Fursey, the celebrated Irish missionary (d. 650). He died at Noyon, on the 1st of December, 660 and was canonized by Pre-congregation. Eligius was buried at Noyon. There is in existence a sermon written by Eligius, in which he combats the pagan practices of his time, a homily on the last judgment, also a letter written in 645, in which he begs for the prayers of Bishop Desiderius of Cahors.

St. Eligius is greatly honoured in Flanders, in the province of Antwerp, and at Tournai, Courtrai of Ghent, Bruges, and Douai. During the Middle Ages his relics were objects of special veneration, and were often transferred to other resting-places, in 881, 1066, 1137, 1255, and 1306. He is the patron of goldsmiths, blacksmiths, and all workers in metal. Cabmen have put themselves under his protection. He is represented in Christian art in the garb of a bishop, a crosier in his right hand, on the open palm of his left a church of chased gold.

Heavenly Father, Saint Eligius learned his craft of a goldsmith and as metalsmith, performed his craft so well that he earned more and more as his reputation grew. With dedication, he used it to help the poor slaves, and to erect churches. He spent his life in the service of the lowly and made sure that the dead got decent burials.

We ask him to pray for business people to succeed with honesty in the world. Remind us, O God, to make worship of you, our highest priority. Bless our efforts, our co-workers, and our income. Deliver us from all anxieties as we work with the resolve of Saint Eligius, in the Name of Jesus our Lord. Amen 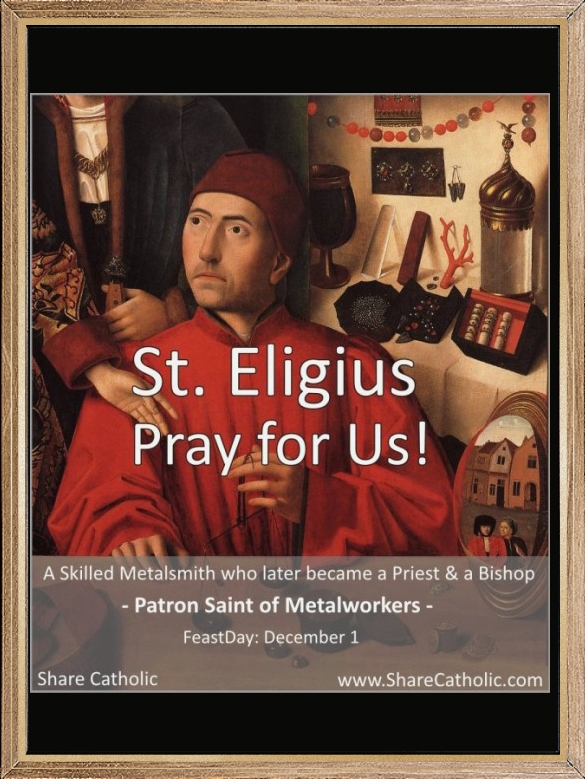 Saint Eligius, pray for us. Amen