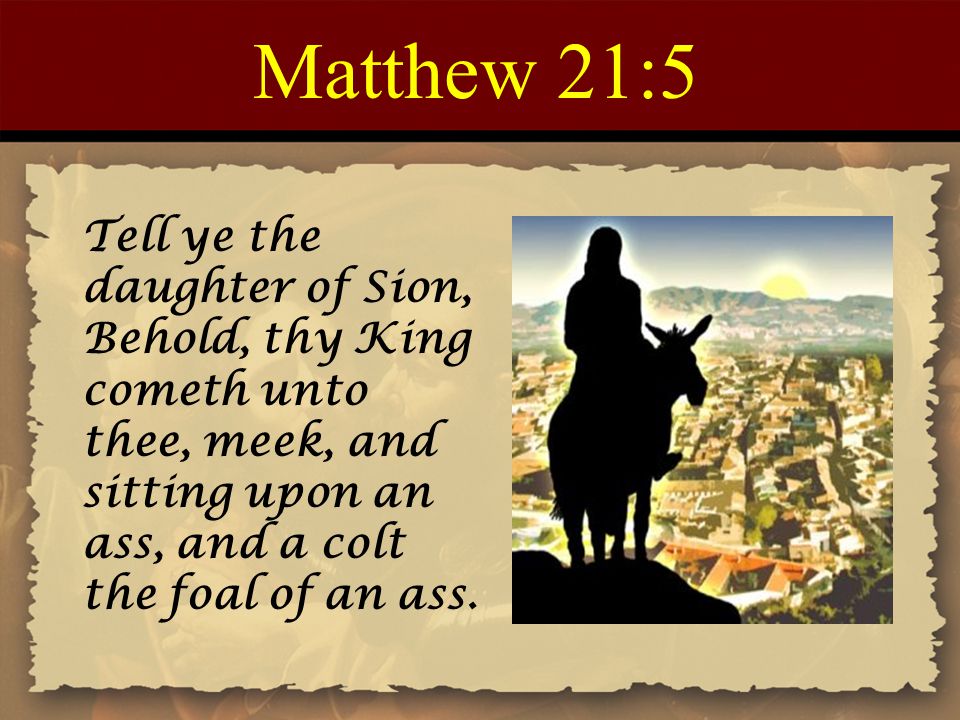 Quoting Zech 9:9. There were several times that Jesus became popular and the crowd wanted Him to be King. Each time Jesus slips away and notes that Mine hour has not yet come. Here Jesus stages the event! He does this deliberately to fulfill an Old Testament prophecy. Daughter of Zion. That is, Jerusalem. Zion was one of the hills on which the city of Jerusalem was built. The expression here rather denotes peaceful, not warlike; not with pomp, and state, and the ensigns of ambition. He came in the manner in which kings were accustomed to ride, but with none of their pride and ambitious feeling. Matthew mentions a donkey and a colt, while the other Gospels mention only the colt. This was the same event, but Matthew focuses on the prophecy in Zech. 9:9, where a donkey and a colt are mentioned. He shows how Jesus’ actions fulfilled the prophet’s words, thus giving another indication that Jesus was indeed the Messiah.

Say to Daughter of Zion, “See, your king comes to you, gentle and riding on a donkey, and on a colt, the foal of a donkey.” The crowds that went ahead of him and those that followed shouted, “Hosanna to the Son of David! Blessed is he who comes in the name of the Lord! Hosanna in the highest heaven!” Matthew 21:5, 9

All praise and glory and highest worship to the King of kings and Lord of lords who, though Creator and Author of our lives, was born lowly and meek when you descended to the earth to save the whole of mankind by taking on the bitter penalty of death on a cross to save deluded mankind and obtain for them the free gift of grace to become citizens of your eternal kingdom of heaven.

Jesus, the prophesied Messiah performed and accomplished his Messianic ministry with the minimal of noisy triumph and acclaim. When he made an entry into Jerusalem astride a borrowed colt, it was indeed the triumph of humility over pride and worldly grandeur, of poverty over affluence and of meekness over rage and malice.

Lord God, this more than demonstrates your immense kindness, leniency and compassion for your creation. Our Lord Jesus, knowing his ministry was coming to its end willingly and with no resistance whatsoever came to the plotting and planning traitorous congregation, to deliver himself into their hands.Their king murdered by those he had come to deliver, to make his death a ransom price for their souls.

O Prince of peace, we tremble with bitter shame and anguish at the vile biddings of men who have so little worth but were wanton and wicked in their ways, betraying their God to appear valiant before men. We humbly ask pardon for all our iniquities and as believers and evangelists, will ever witness to your glory, in Jesus’ Name. Amen