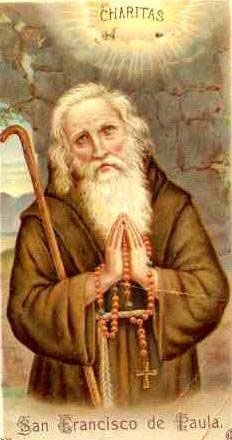 Francis was born (March 27, 1416 – April 2, 1507) in the town of Paola, which lies in the southern Italian Province of Cosenza, Calabria, Italy, on March 27, 1416, to Giacomo Martolilla and Vienna from Fuscaldo. Being advanced in years, his parents attributed the birth of their eldest child to the intercession of St Francis of Assisi. This is the reason why they named him Francis and promised to make him wear the votive habit of Franciscans for a year, .

In his youth he was educated by the Franciscan friars in Paola. His parents, having remained childless for some years after their marriage, had recourse to prayer and especially commended themselves to the intercession of Francis of Assisi, after whom they had named their first-born son. Two other children were eventually born to them.

When still in the cradle, Francis suffered from a swelling which endangered the sight of one of his eyes. His parents again had recourse to Francis of Assisi and made a vow that their son should pass an entire year wearing the “little habit” of St Francis in one of the friaries of his Order, a not-uncommon practice in the Middle Ages. The child subsequently recovered completely from his malady.

At the age of 13, being admonished by a vision of a Franciscan friar, he entered a friary of the Franciscan Order to fulfill the vow made by his parents. The friars wished that he kept on living with them but, when the year to spend in St Marco Argentano passed, Francis, feeling that the time of a radical choice of life was approaching and wishing to know the various religious lifestyles, left the monastery. 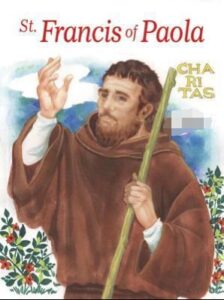 After accompanying his parents on a pilgrimage to Rome and Assisi, and other places of devotion, he began to live as a contemplative hermit in a remote cave near Paola, on Italy’s southern seacoast. He first selected a secluded cave on his father’s estate, but later found an even-more secluded cave on the sea coast. Here he remained in solitude for about six years, giving himself to prayer and mortification.

Before he was 20, he received the first followers who had come to imitate his way of life. Seventeen years later, when his disciples had grown in number, Francis established a Rule for his austere community and sought Church approval. This was the founding of the Hermits of St. Francis of Assisi, who were approved by the Holy See in 1474.

In 1492, Francis changed the name of his community to “Minims” because he wanted them to be known as the least (minimi) in the household of God. Humility was to be the hallmark of the brothers as it had been in Francis’ life. Besides the vows of poverty, chastity and obedience, Francis enjoined upon his followers the fourth obligation of a perpetual Lenten fast. He felt that heroic mortification was necessary as a means for spiritual growth.

From the very beginning Francis was a famous wonder-worker. He worked wonders for all of his life, from the building of his first monastery till his French period. His powers were on behalf of the poor and of people who were oppressed by the frequent embezzlements, against which Francis spoke indefatigably, of the powerful. 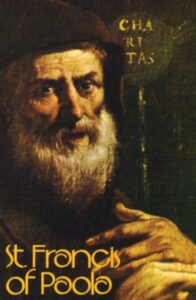 He used common objects to work miracles so that everyone understood that it was God who really restored people to health or solved problems.The following episode is a good example of his “wonder methodology”. A young man of Paola had a wound in his arm which could not heal although he had consulted famous doctors. ‘Go to Francis and he will heal you’, his mother said to him. He made up his mind and went to the Saint to tell him about his problem and his unsuccessful attempts to solve it.

Francis stooped down to pick a herb at random and said, ‘Make it boil, put it on your arm and you will heal’. The young man looked at him and objected, ‘This is common herb, how can it work miracles?’. ‘It is the faith which works miracles’, the Hermit replied. Again, when a priest said to Francis, ‘How do you know that this herb has healing virtues?’, the saint answered, ‘To whom is a faithful servant of God and obeys his commandments even herbs reveal their virtues’.

One day Francis crossed the Straits of Messina by standing on his cloak laid on water. It was Francis’ desire to be a contemplative hermit, yet he believed that God was calling him to the apostolic life. He began to use the gifts he had received, such as the gifts of miracles and prophecy, to minister to the people of God. A defender of the poor and oppressed, Francis incurred the wrath of King Ferdinand of Naples for his admonitions toward the king and his sons.

Following the request of Pope Sixtus IV, Francis traveled to Paris to help Louis XI of France prepare for his death. While ministering to the king, Francis was able to influence the course of national politics. He helped to restore peace between France and Brittany by advising a marriage between the ruling families, and between France and Spain by persuading Louis XI to return disputed land. He died in Tours on April 2, 1507.

His fame spread through Europe thanks to the three branches of his order, and contributed to his beatification (July 7, 1513) and his canonization (May 1, 1519), which took place after only twelve years since his death. He is Patron against fire, boatmen, Calabria Italy, mariners, naval officers, plague epidemics, sailors, sterility, travellers, watermen. His symbols are a man with the word “charitas” levitated above a crowd; man holding a skull and scourge; man sailing on his cloak. 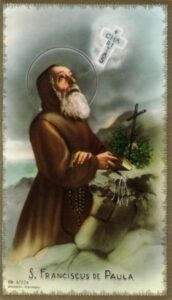 PRAYER TO ST. FRANCIS OF PAOLA

O most holy Saint Francis, God gives wisdom to the simple and makes the merest child wise. Pray that He grants us this reward He promises to the humble, through your intercession.

Help us always to make a good examination of conscience and a good confession and to die a holy death. Amen