FEAST OF SAINT JOAN OF ARC – 30th MAY 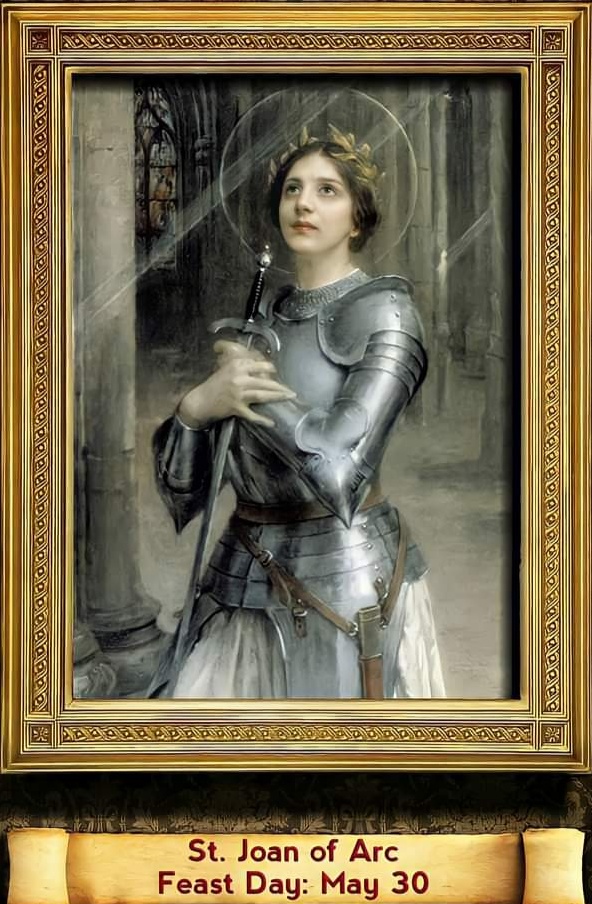 FEAST OF SAINT JOAN OF ARC
FEAST DAY – 30th MAY

Joan of Arc (1412 – 30 May 1431) is considered a heroine of France for her role in the siege of Orléans and the coronation of Charles VII of France during the Hundred Years’ War against England. After successfully leading several French military actions, she was captured, handed over to English authorities, convicted as a heretic, and burnt at the stake in 1431.

Fifteen years later, her conviction was formally overturned due to her “unjust and deceitful” trial. Nearly 500 years after her death, she was canonized as a saint by the Roman Catholic Church. St. Joan of Arc, whose feast day is May 30, inspired the French in battle against the English in the 15th century and was subsequently executed as a heretic.

Hundreds of years later, she inspires more questions than nearly any saint in history. Books about her fill shelves, and perhaps more films tell her story than that of any other saint. She continues to fascinate and captivate the popular imagination.

Joan was born to a peasant family at Domrémy in northeast France. In 1428, she traveled to Vaucouleurs and requested to be taken to Charles, later testifying that she had received visions from the archangel Michael, Saint Margaret, and Saint Catherine instructing her to support Charles and recover France from English domination.

Her request to see the king was rejected twice, but she was finally given an escort to meet Charles at Chinon. After their interview, Charles sent Joan, who was about 17 years old, to the siege of Orléans as part of a relief army. She arrived at the city on 29 April 1429, and quickly gained prominence during the fighting. The siege was lifted nine days after her arrival. 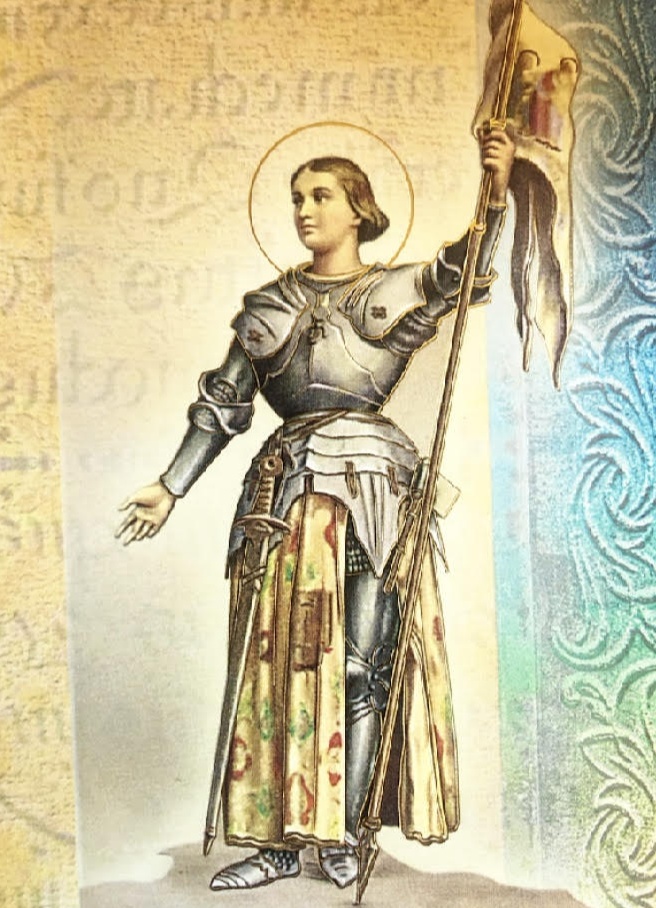 Joan participated in the Loire Campaign, which culminated in the decisive defeat of the English at the Battle of Patay. The French army advanced on Reims and entered the city on 16 July. The next day, Charles was crowned as the King of France in Reims Cathedral with Joan at his side. These victories boosted French morale and paved the way for the final French victory in the Hundred Years’ War at Castillon in 1453.

After Charles’s coronation, Joan and John II, Duke of Alençon’s army besieged Paris. An assault on the city was launched on 8 September. It failed, and Joan was wounded. The French army withdrew and was disbanded. In October, Joan was participating in an attack on the territory of Perrinet Gressart, a mercenary who had been in the service of the English and their French allies, the Burgundians.

After some initial successes, the campaign ended in a failed attempt to take Gressart’s stronghold. At the end of 1429, Joan and her family were ennobled by Charles. In early 1430, Joan organized a company of volunteers to relieve Compiègne, which had been besieged by the Burgundians. She was captured by Burgundian troops on 23 May and exchanged to the English.

She was put on trial by the pro-English bishop, Pierre Cauchon, on a charge of heresy. She was declared guilty and burned at the stake on 30 May 1431, dying at about 19 years of age. In 1456, Pope Callixtus III authorized an inquisitorial court to investigate the original trial. The court nullified the trial’s verdict, declaring it was tainted by deceit and procedural errors, and Joan was exonerated.

Since her death, Joan has been popularly revered as a martyr. After the French Revolution she became a national symbol of France. She was canonized in 1920, and declared a secondary patron saint of France in 1922. Joan of Arc remains a popular figure in modern literature, painting, sculpture and music, and cultural depictions of her continue to be created. 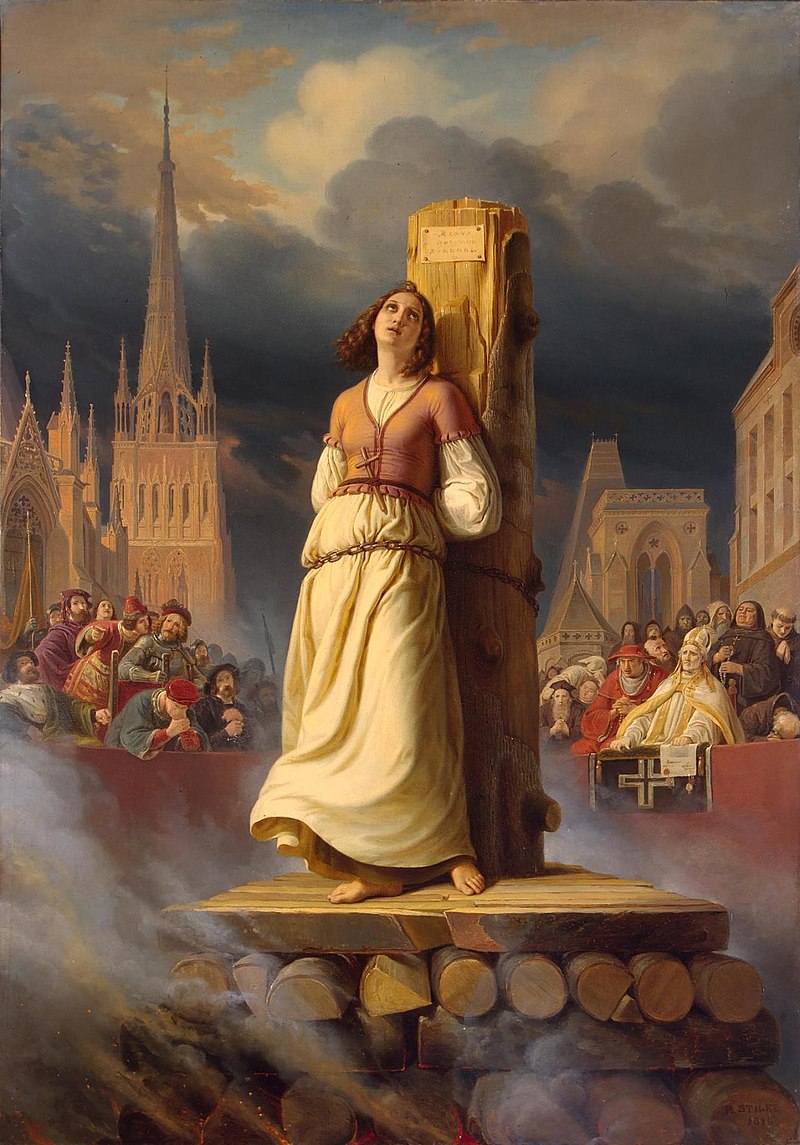 Joan was born into the midst of the Hundred Years’ War, a conflict that actually lasted 116 years, from 1337 to 1453. This “war” was not one constant, ongoing battle, but rather an intermittent series of fights, punctuated by years of peace and bouts of plague, over who had the right to rule France.

The dispute involved a long series of claimants, both English and French, to France’s throne. This being the medieval period, there was much intermarriage between royal families making a clear-cut winner a tough pick. Some French, called the Burgundians, supported the English claim.

This was a fight between two Catholic countries. It wouldn’t be until the 16th century that King Henry VIII severed England’s ties to Rome. Joan was born to a devout peasant family in Domremy, France. She was illiterate and spent her childhood learning domestic duties and helping on the farm. It is said that even within her own local area, people disagreed about whom should rule France.

When Joan was around 12 or 13 years old, she began to have visions. She said her messengers were St. Michael the Archangel, St. Catherine of Alexandria and St. Margaret of Antioch, and their assignment became clear: She was to help Charles VII be officially proclaimed the rightful king of France.

As a little girl, she did not immediately act on these messages. But she continued to see visions and hear voices and by the time she was 16, she approached a local garrison commander and told him she wanted to meet the king. Naturally, he scoffed. But Joan must have been incredibly charismatic. And being medieval France, her claim of visions appealed to popular imagination.

But first she needed to sway the commander, who relented and sent her with an escort on the 300-mile journey, some of it through wilderness, to the king’s court. What happened there is a mystery. Tradition says Joan was able to recognize Charles VII, even though he disguised himself to test her. Supposedly, she told him things only he would know. 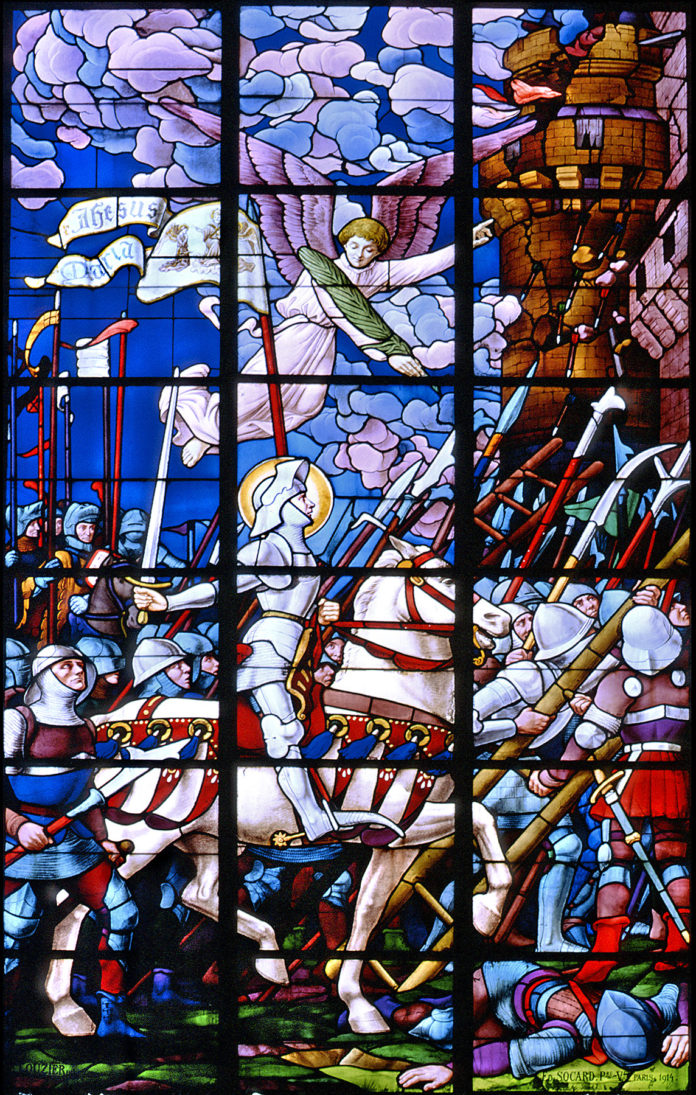 The likeness of St. Joan of Arc is seen at St. Etienne Cathedral in Auxerre, France. Charles VII allowed Joan, dressed for battle as a man, to lead his troops into the crucial fight for Orleans. Although Joan was wounded during the battle, the liberation of Orleans and subsequent victories led to the formal crowning of Charles at Rheims, which had also been foretold in her visions. (Gene Plaisted/CNS, via The Crosiers) See FAITH-ALIVE 22 April 23, 2020.

Convinced, he allowed her, dressed for battle as a man, to lead his troops into the crucial fight for Orleans. Fervent hope spread that the young visionary was God’s instrument of French victory. Although Joan was wounded during the battle, the liberation of Orleans and subsequent victories led to the formal crowning of Charles at Rheims, which had also been foretold in her visions. Her renown spread; she was perhaps the most famous person in Europe.

Unfortunately for Joan, military victory was short-lived. Her subsequent imprisonment cast a negative light on Charles VII, who did almost nothing to secure her release. The English put her on trial, an ecclesial trial run by the Church. But that did not take politics out of the equation, since she was in English custody and her enormous notoriety was political.

Transcripts of her trial exist, portraying a courageous woman maintaining confidence in her visions. Joan was charged with heresy, witchcraft and dressing like a man. Yes, that last charge alleged that Joan’s cross-dressing violated divine law, even though she needed the protection of armor in battle and protested that she feared assault in prison without male garb.

Public heresy was a capital crime, in which an unrepentant or relapsed heretic could be given over to the judgment of the secular courts and punished by death. Having signed the abjuration, Joan could not be put to death as an unrepentant heretic, but she could be put to death if she was convicted of relapsing into heresy again.

As part of her abjuration, Joan was required to renounce wearing men’s clothes. She exchanged her clothes for a woman’s dress and allowed her head to be shaved. But she was kept in English custody instead of being transferred to an ecclesiastical prison. She was returned to her cell and kept in chains.

Witnesses stated that Joan was subjected to mistreatment and rape attempts, including one by an English noble, and that guards placed men’s clothes in her cell, forcing her to wear them. Cauchon was notified that Joan had resumed wearing male clothing. He sent clerics to admonish her to remain in submission, but the English prevented them from visiting her. 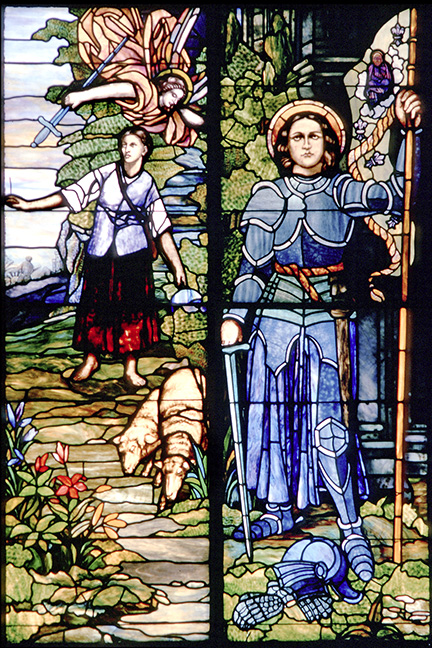 The likeness of St. Joan of Arc is seen at St. John Berchman Church in Chicago. Joan was born to a devout peasant family in Domremy, France. She was illiterate and spent her childhood learning domestic duties and helping on the farm. (Gene Plaisted/CNS, via The Crosiers) See FAITH-ALIVE 22 April 23, 2020.

On 28 May, Cauchon personally went to Joan’s cell, along with a number of other clerics. According to the trial record, Joan said that she had gone back to wearing men’s clothes because it was more fitting that she dress like a man while being held with male guards, and the judges had broken their promise to let her go to mass and to release her from her chains.

She stated that if they fulfilled their promises and placed her in a decent prison, she would be obedient. When Cauchon asked about her visions, Joan stated that they had blamed her for adjuring out of fear, but she would not deny them again. As Joan’s abjuration had required her to deny her voices, this was sufficient to convict her of relapsing into heresy and to condemn her to death. The next day, forty-two assessors were summoned to decide Joan’s fate.

Eventually found guilty, Joan was burned before a crowd of thousands. Her ashes were scattered in the Seine River. The Hundred Years’ War would drag on, but Joan’s martyrdom helped spur the French to eventually drive the English out of most of France. Charles VII, perhaps feeling some well-deserved guilt, procured a trial review years later that nullified Joan’s guilty verdict.

It would be nearly 500 years later, in 1920, that the 19-year-old visionary and warrior was canonized, increasing her historical profile and offering an example of strength against impossible odds for women everywhere. 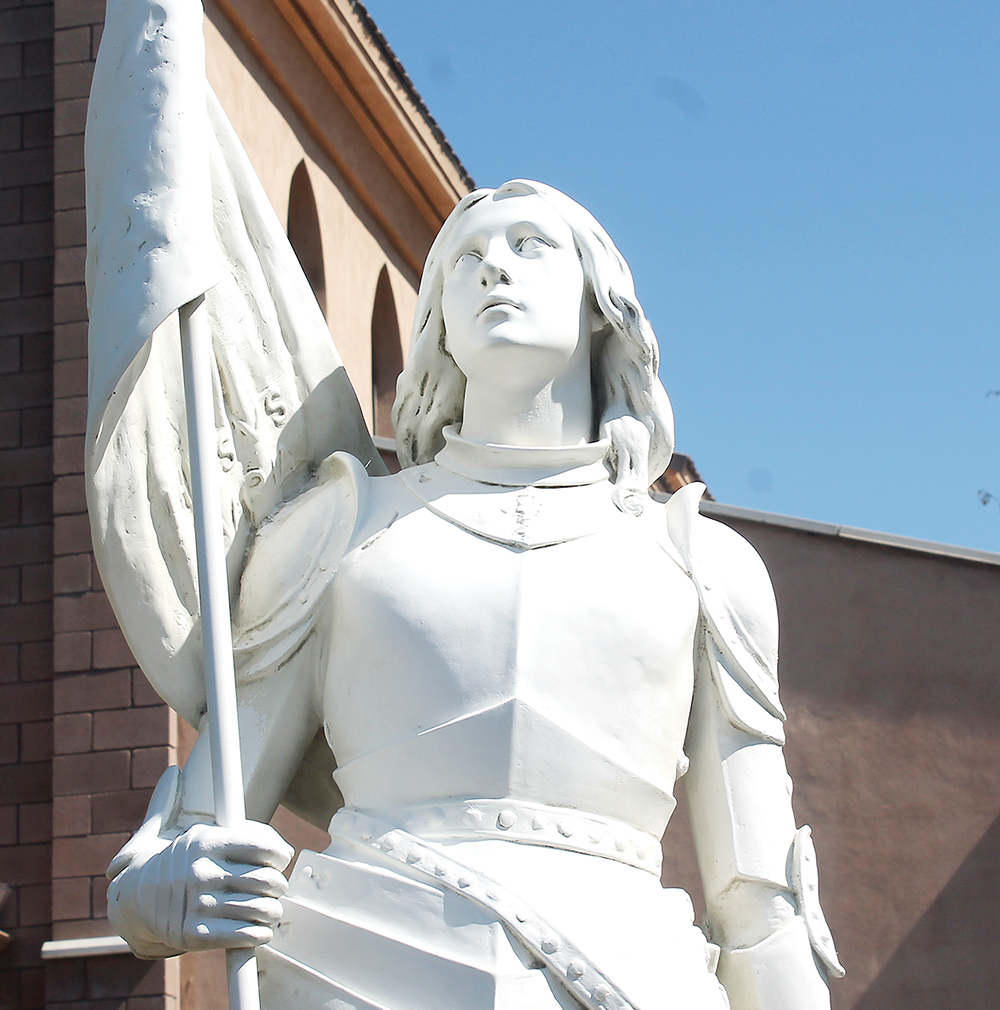 Saint Joan of Arc, you held firm in your faith and faced your enemies, who harassed, ridiculed and doubted you, with commendable fortitude.

We pray that we may be so emboldened in our beliefs as to confront courageously our own battles in this life. Amen 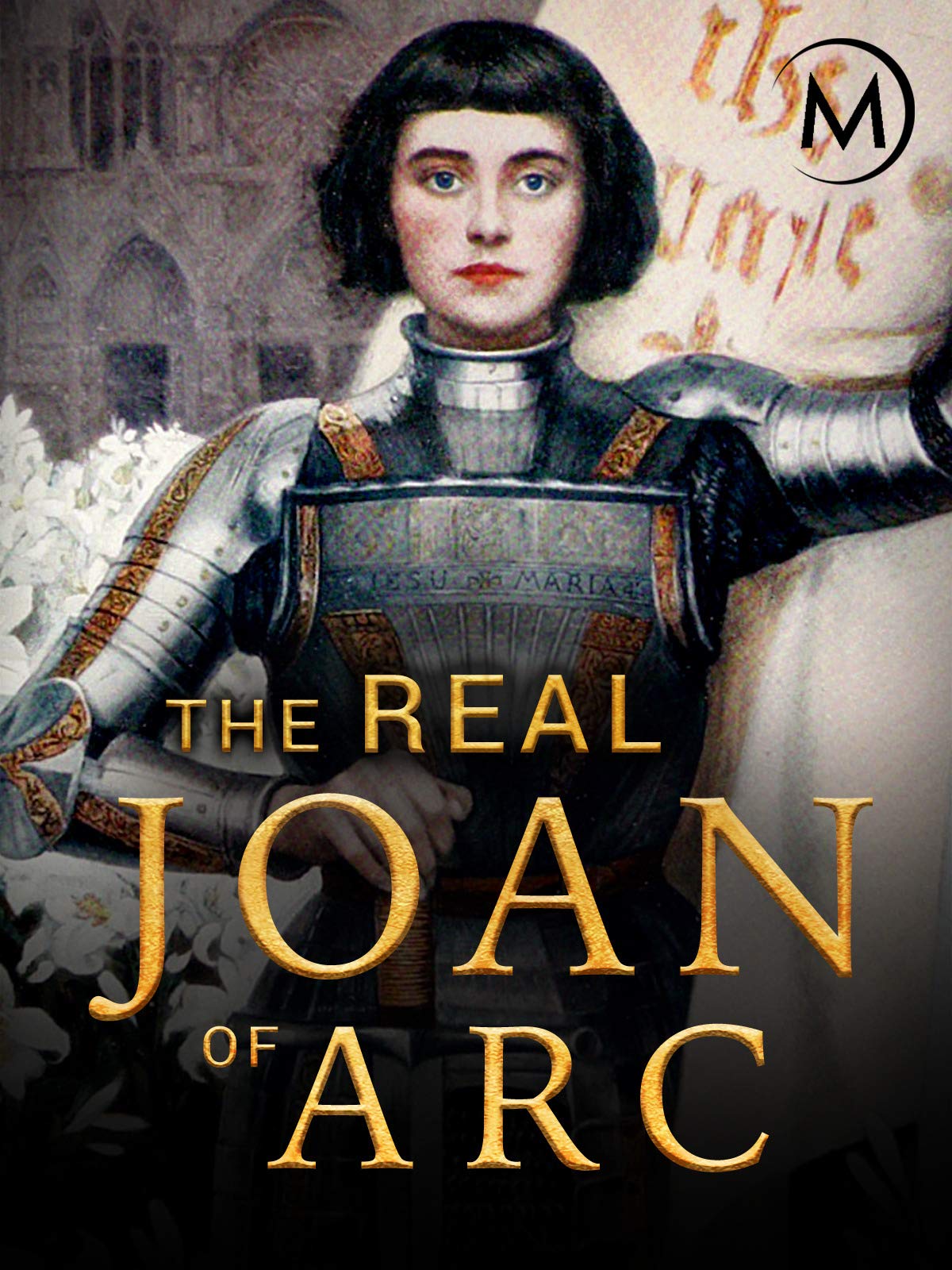