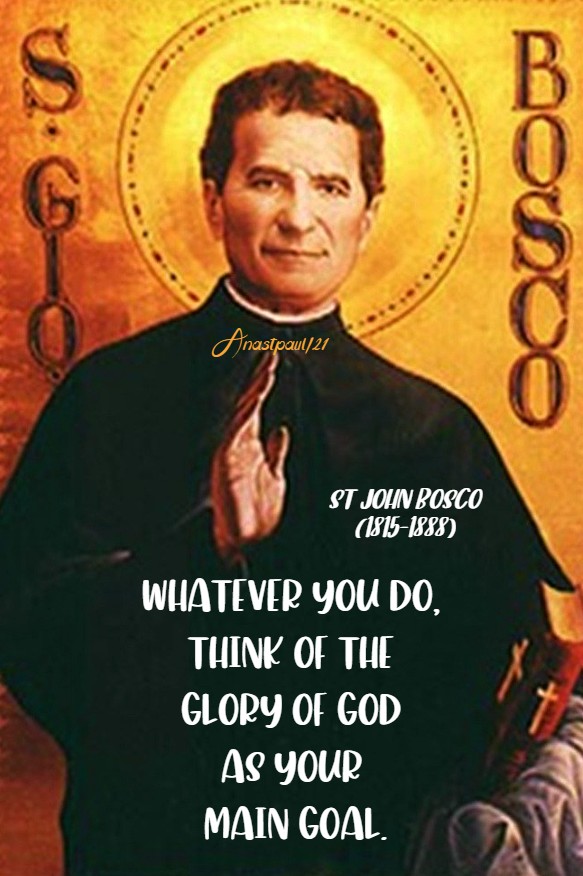 John Melchior Bosco was an Italian Roman Catholic priest, educator, and writer of the 19th century. He dedicated his life to the betterment and education of street children, juvenile delinquents, and other disadvantaged youth. Bosco was an ardent devotee of Mary, mother of Jesus, under the title Mary Help of Christians. He later dedicated his works to de Sales when he founded the Salesians of Don Bosco, based in Turin. Together with Maria Domenica Mazzarello, he founded the Institute of the Daughters of Mary Help of Christians, now commonly known as the Salesian Sisters of Don Bosco, a religious congregation of nuns dedicated to the care and education of poor girls. He taught Dominic Savio, of whom he wrote a biography that helped the young boy be canonized.

He is one of the pioneers of Mutual Aid Societies providing financial support to young migrant Catholic Workers in the city of Turin. In 1850 he drew up regulations to assist apprentices and their companions when any of them was involuntary without work or fell ill. On 18 April 1869, one year after the construction of the Basilica of Mary Help of Christians in Turin, Don Bosco established the Association of Mary Help of Christians connecting it with commitments easily fulfilled by most common people, to the spirituality and the mission of the Salesian Congregation.

In 1875, he began to publish the Salesian Bulletin, which has remained in continuous publication, and is currently published in 50 different editions and 30 languages. In 1876, Bosco founded a movement of laity, the Association of Salesian Cooperators, with the same educational mission to the poor. Bosco established a network of organizations and centres to carry on his work. Following his beatification in 1929, he was canonized as a saint in the Roman Catholic Church by Pope Pius XI in 1934.

He was the youngest son of Francesco Bosco (1784–1817) and Margherita Occhiena. He had two older brothers, Antonio, and Giuseppe (1813–1862). The Boscos of Becchi were farmhands of the Moglian Family. John Bosco was born into a time of great shortage and famine in the Piedmontese countryside, following the devastation wrought by the Napoleonic Wars and drought in 1817. When he was little more than two years old, his father, Francesco, died, which left the support of three boys to his mother, Margherita. She played a strong role in Bosco’s formation and personality, and was an early supporter of her son’s ideals.

In 1825, when he was nine, Bosco had the first of a series of dreams that would play an influential role in his outlook and work. This first dream “left a profound impression on him for the rest of his life”, according to his own memoirs. Bosco apparently saw a multitude of very poor boys playing and blaspheming and a man, who “appeared, nobly attired, with a manly and imposing bearing” and said to him, “You will have to win these friends of yours not with blows, but with gentleness and kindness. So begin right now to show them that sin is ugly and virtue beautiful”.

Poverty prevented any serious attempt at schooling. His early years were spent as a shepherd, and he received his first instruction from a parish priest. His childhood experiences are thought to have inspired him to become a priest. Being a priest was then more commonly a profession for the privileged classes, than for farmers. On a cold morning in February 1827, John left his home and went to look for work as a farm servant. At 12, he found life at home unbearable because of continuous quarrels. In 1830, he met Joseph Cafasso, a young priest who identified some natural talent and supported his first schooling. Bosco’s mother, Margherita, managed to earn enough money to finance his education.

In 1835, Bosco entered the seminary at Chieri, next to the Church of the Immacolata Concezione. In 1841, after six years of study, he has ordained a priest on the eve of Trinity Sunday by Archbishop Franzoni of Turin. He was twenty-six years old. John Bosco was first called to be chaplain of the Rifugio (“Refuge”), a girls’ boarding school founded in Turin by the Marchioness Giulia di Barolo. His other ministries included visiting prisoners, teaching catechism, and helping out at many country parishes.

Bosco disliked the ideals that had been exported by Revolutionary France and called Rousseau and Voltaire “two vicious leaders of incredulity”. He favoured an ultramontane view of politics that acknowledged the supreme authority of the pope. In 1854, when the Kingdom of Sardinia was about to pass a law suppressing monastic orders and confiscating ecclesiastical properties, Bosco reported a series of dreams about “great funerals at court” that referred to politicians or members of the Savoy court.

In November 1854, he sent a letter to King Victor Emmanuel II admonishing him to oppose the confiscation of church property and suppression of the orders, but the King failed to respond. His actions, which had been described by the Italian historian Roberto Petoia as having “manifest blackmailing intentions”, ended only after the intervention of Prime Minister Camillo Benso, Count of Cavour. The king’s family suffered several deaths in a short period. From January to May 1855, the king’s mother (age 54), wife (32), newborn son (Vittorio Emanuele, Count of Genoa; nearly four months old), and his only brother (32) all died.

Opposition to Bosco and his work came from various quarters. Traditionalist clergy accused him of stealing the young and old people away from their own parishes. The Marquis de Cavour, the chief of police in Turin, regarded the open-air catechisms as overtly political and a threat to the state and was highly suspicious of Bosco’s support for the powers of the papacy. Several attempts were also made on Bosco’s life, including a near-stabbing, bludgeoning, and a shooting. Early biographers put that down to the growing influence of the Waldensians in opposition to Catholic clergy.

Some of the boys helped by Don Bosco decided to do what he was doing, working in the service of abandoned boys. That was the origin of the Salesian Congregation. In 1859, Bosco selected the experienced priest Vittorio Alasonatti, 15 seminarians, and one high school boy and formed them into the “Society of St. Francis de Sales”. That was the nucleus of the Salesians, the religious order that would carry on his work. When the group had their next meeting, it voted on the admission of Joseph Rossi as a lay member, the first Salesian brother. The Salesian Congregation was divided into priests, seminarians, and lay brothers.

Next, he worked with Mary Mazzarello, and a group of girls in the hill town of Mornese. In 1871, he founded a group of religious sisters to do for girls what the Salesians were doing for boys. They were called the “Daughters of Mary Help of Christians”. In 1874, he founded yet another group, the “Salesian Cooperators”, with mostly lay people.
The first Salesians departed for Argentina in 1875. Bosco died on 31 January 1888. His funeral was attended by thousands. Soon, there was popular demand to have him canonized.

The Archdiocese of Turin investigated, and witnesses were called to determine if Bosco was worthy to be declared a saint. The Salesians, Daughters, and Cooperators gave supportive testimonies. But many remembered Bosco’s controversies in the 1870s with Archbishop Gastaldi, and some others in the upper Church hierarchy thought him to be a loose cannon. In the canonization process, testimony was heard about how he went around Gastaldi to get his men ordained and about their lack of academic preparation and ecclesiastical decorum.

Pope Pius XI had known Bosco and pushed the cause forward. Pius XI beatified Bosco on 2 June 1929 and canonised him on Easter Sunday (1 April) of 1934, when he was given the title of “Father and Teacher of Youth”. Pope Pius XII proclaimed him patron of Catholic publishers in 1949. His repertoire of writings and publications consists of over 220 titles collected in 38 volumes. They were printed at his own peerless paper-to-print workshop where boys learned the art of printing and publishing in view of future employment.

Bosco had been popularly known as the patron saint of illusionists and on 30 January 2002, Silvio Mantelli petitioned Pope John Paul II to declare Bosco formally to be patron of stage magicians. Catholic stage magicians who practice gospel magic venerate Bosco by offering free magic shows to underprivileged children on his feast day. Bosco’s work was carried on by an early pupil, collaborator, and companion, Michael Rua, who was appointed rector major of the Salesian Society by Pope Leo XIII in 1888. He is remembered in the Church of England with a commemoration on 31 January. 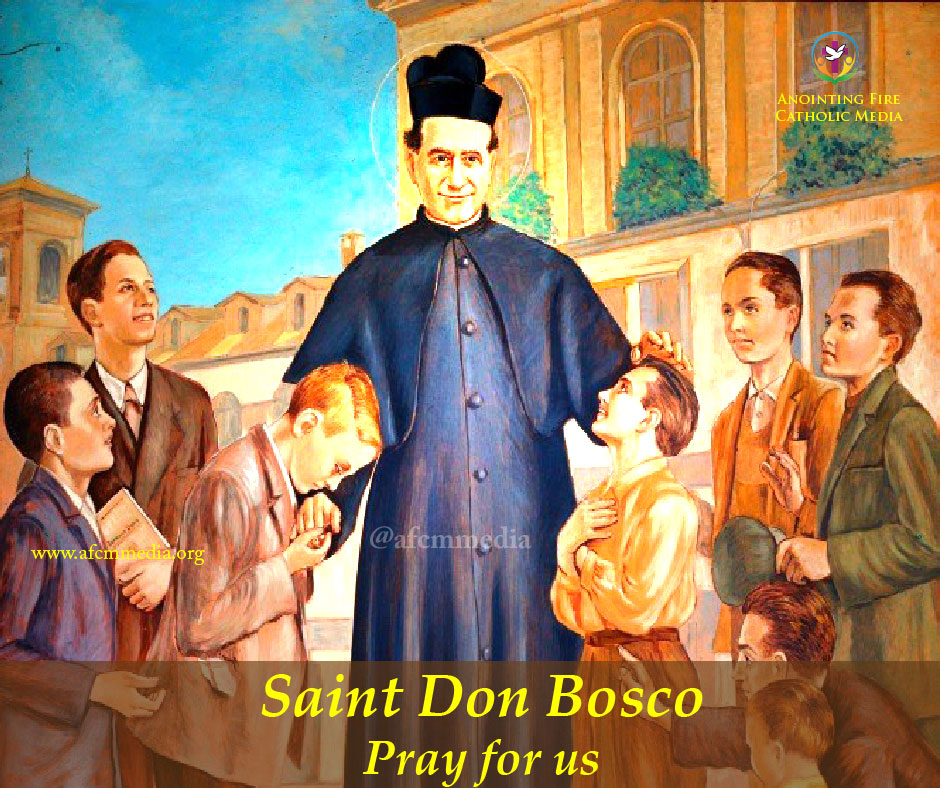 O glorious Saint John Bosco, you led youngsters to the feet of the Divine Master and instructed them in the faith and in Christian morality, thus heroically sacrificing your life to the very end. You set up a religious Institutes leading men to endure and to bring to the farthest boundaries of the earth your glorious work.

Obtain for us from Our Lord a holy love for youngsters who are exposed to worldliness, in order that we may generously support them in fighting the snares of the devil, in keeping them safe from the dangers of the world, and in guiding them, pure and holy, in the path that leads to God. Amen 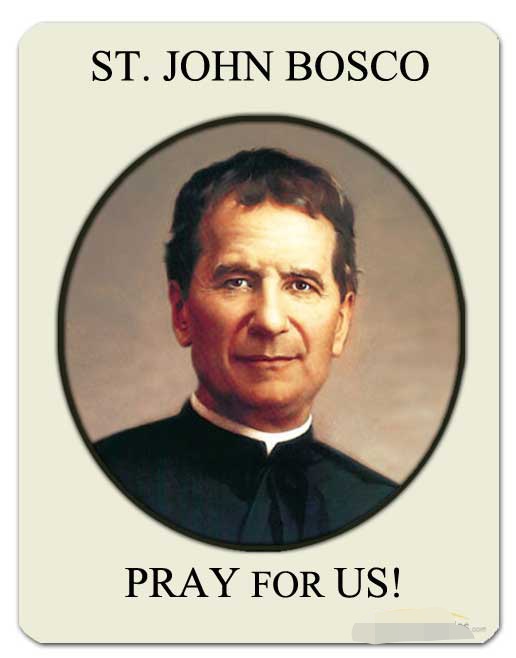