FEAST OF SAINT JOSEPH THE WORKER – 1st MAY 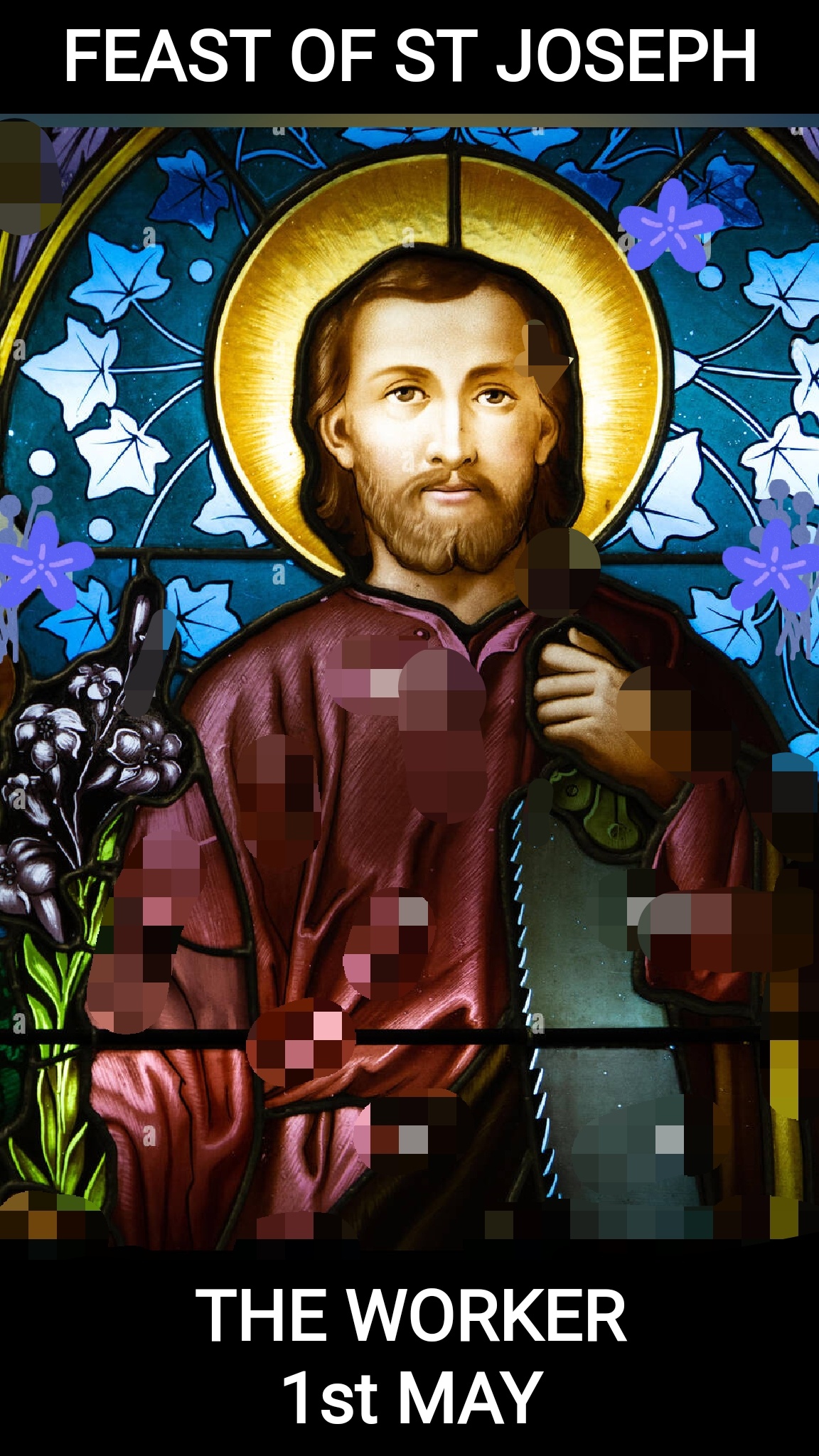 FEAST OF SAINT JOSEPH THE WORKER
FEAST DAY – 1st MAY

In addition to being the spouse of the Blessed Virgin Mary, and the foster father of Jesus, St Joseph was a carpenter. Through his work of manual labour, Joseph provided for the Holy Family, and shared in the divine plan of salvation. Saint Joseph, the virginal father of Jesus Christ, was faithful to his daily work as a carpenter. With his work, Saint Joseph supported his virgin wife, Mary, and the Child Jesus, his Son.

The Gospel of St Matthew describes Joseph as a “just man”, which in the language of the Bible means one who loves and respects the law as the expression of the will of God. Like Mary, Joseph too was visited by an angel, who appeared to him in a dream. And, again like Mary, her spouse, Joseph said “Yes”, when the angel revealed that the Child she bore was conceived of the Holy Spirit. 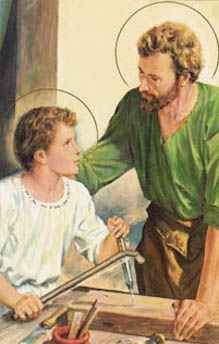 The special characteristic of Joseph is hiddenness, remaining in the background. No word of his is recorded in the Gospels. He is not mentioned after the finding of Christ in the Temple. Probably by the time Jesus began his public life, at the wedding in Cana, Joseph had already passed to the next life, although we don’t know exactly when or where he died. And the place of his burial remains a mystery.

His main mission was his participation in the Divine Plan for the bringing of salvation to mankind. As is true of many fathers, Joseph raised Jesus to follow in his own profession as a craftsman; in the Gospels, Jesus is called “the son of the carpenter”.

The life of St Joseph shows us the dignity of human work, which is the duty and the perfection of human beings, who in this way exercise dominion over creation, share in the work of the Creator, offer their service to the community, and participate in God’s plan of salvation. Joseph loved his work. 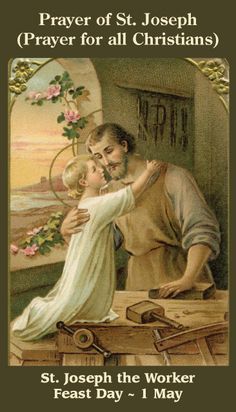 He never complained of weariness, but as a man of faith elevated it to the exercise of virtue. He found great contentment in his work, because he did not aspire to wealth and did not envy the rich; for Joseph, work was not a means to satisfy his own greed, but an instrument to support his family.

And, following God’s commandment, on the Sabbath, St Joseph observed the weekly rest and took part in the celebrations. We should not wonder at this noble conception of the humble work of manual labour: already in the Old Testament, in fact, God was seen symbolically as a winegrower, a sower, a shepherd.

The feast of Saint Joseph the Worker, was officially instituted by Pope Pius XII on 1 May 1955, in order to ensure that workers do not lose this Christian understanding of work; but earlier Popes had already prepared the ground. Blessed Pius IX, in a certain way, had recognized the importance of Saint Joseph as a labourer, when he proclaimed him Patron of the Universal Church.

The principle of work as a means to eternal salvation would be taken up again by St John Paul II in his encyclical Laborem exercens, where he refers to “the Gospel of Work”. And Cardinal Angelo Roncalli – who became Pope St John XXIII – when he was elected to the Throne of Peter had thought of taking the name Joseph, so devoted was he to the saint. Many other saints, especially St Teresa of Avila, had a particular devotion to Saint Joseph.

Pope Pius XII who established the feast of Saint Joseph the Worker, chose May 1, a day the Communists used to celebrate their view of labor, as the day for this important feast which shows the importance of work in a Christian’s life. The pope gave Christian workers the example of Saint Joseph to show forth the dignity of labor, no matter how menial.

“If the Family of Nazareth is an example and model for human families, in the order of salvation and holiness, so too, by analogy, is Jesus’ work at the side of Joseph the carpenter. In our own day, the Church has emphasized this by instituting the liturgical memorial of St. Joseph the Worker on May 1” (St. John Paul II).

St. John Paul II went on to say: “Human work, and especially manual labor, receive special prominence in the Gospel… At the workbench where he plied his trade together with Jesus, Joseph brought human work closer to the mystery of the Redemption.”

In 2005, Pope Emeritus Benedict XVI stated: “It is necessary to live a spirituality that helps believers to sanctify themselves through their work, imitating St. Joseph, who had to provide with his own hands for the daily needs of the Holy Family and whom, consequently, the Church holds up as Patron of workers.”

Prayer for our work helps us get through the stresses and struggles we experience as we support ourselves and our loved ones. We can offer our work to God for His honor and glory and for the good of ourselves and others; in this way work becomes a prayer.

This prayer to St. Joseph the Worker, a prayer for our work, was written by Pope Pius X. St. Joseph, patron of workers, a happy death, and the Universal Church, pray for us!

O Glorious St. Joseph, model of all those who are devoted to labor, obtain for me the grace to work conscientiously, putting the call of duty above my natural inclinations, to work with gratitude and joy, in a spirit of penance for the remission of my sins, considering it an honor to employ and develop by means of labor the gifts received from God, to work with order, peace, moderation and patience, without ever shrinking from weariness and difficulties, to work above all with purity of intention and detachment from self, having death always before my eyes and the account that I must render of time lost, of talents wasted, of good omitted, of vain complacency in success, so fatal to the work of God. All for Jesus, all through Mary, all after thine example, O Patriarch St. Joseph. Such shall be my motto in life and in death. 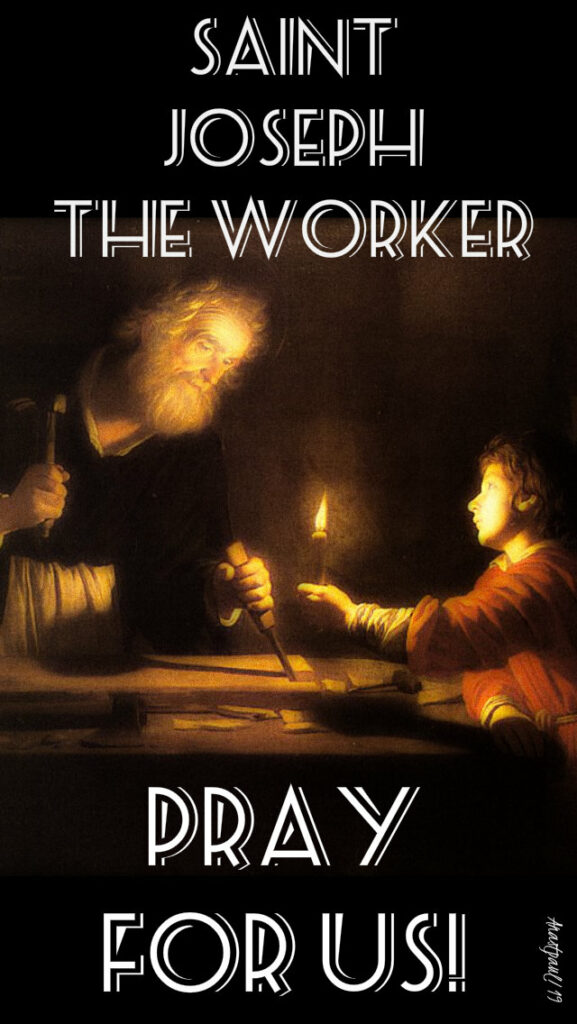 Shed your clear light on our hearts, Lord, so that walking continually in the way of Your commandments, we may never be deceived or misled. Your ways are not our ways, teach us to willingly agree to them, for You know which way we should go. Help us to say “yes” always to Your plan and to render ourselves as a sacrament of Your divine love to all we meet. Fill us with the grace to be your tools to bring glory to Your kingdom. St Joseph, silent and loving husband and father, as you worked for and protected your family on earth, protect us all now in the Church of Your adopted son. Through Him, our Our Lord Jesus Christ with You, in the union of the Holy Spirit, one God forever. Amen 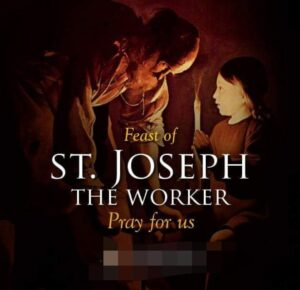 Saint Joseph the Worker, pray for us all to work diligently, faithfully, devotedly, without greed or avarice, but out of pure joy of God’s purpose for us, out of honesty and a sincere desire to give back to the universe, for the sake of God’s glory, in the capacity we can. Amen 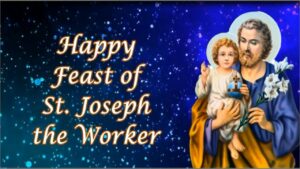